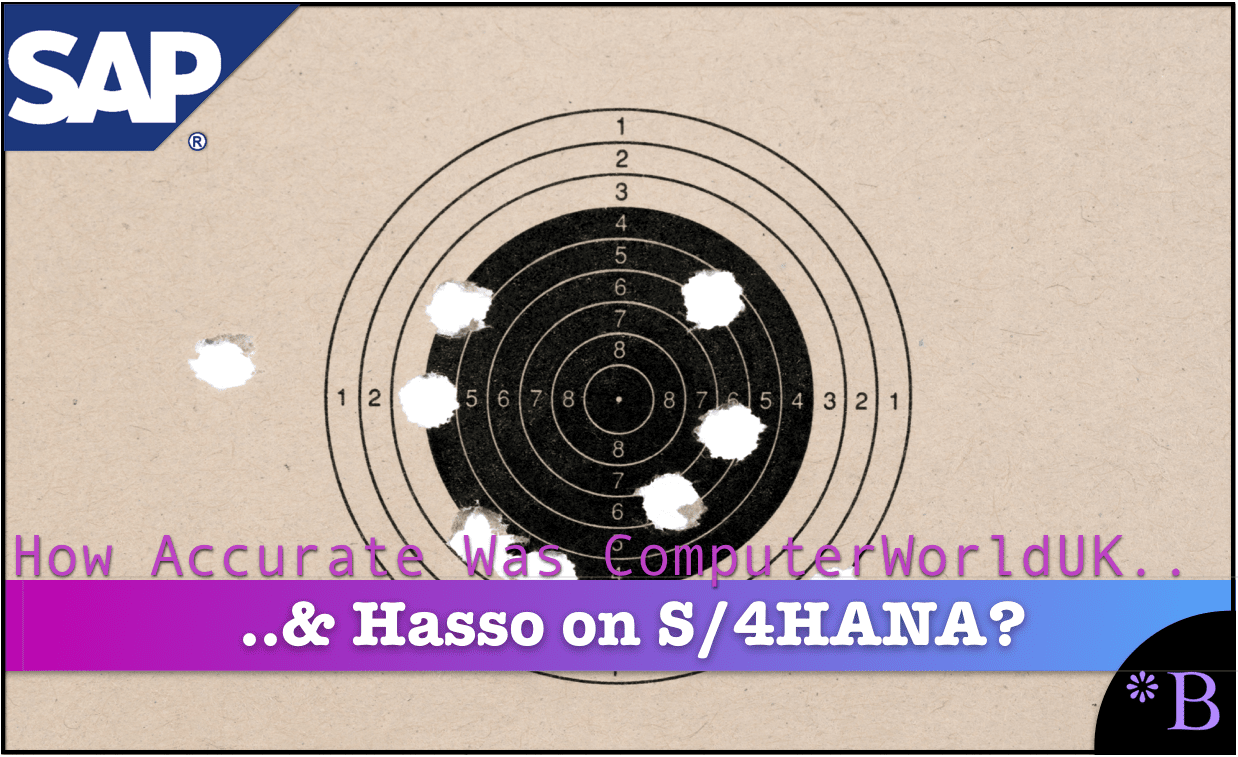 On SAP Not Being a SaaS Competitor

“The cofounder of the German software giant SAP, Dr Hasso Plattner, took to the stage at the Sapphire conference this week to talk about the company’s latest Leonardo product and why he sees it’s next generation ERP S/4HANA’s future as residing in the cloud

Mark Hurd, the CEO of arch rival Oracle criticised SAP’s cloud strategy back in December. As reported by Diginomica he said: “Their cloud strategy, which is most often referred to by the term S4/HANA, is fundamentally a hosting strategy. It’s really taking their core ERP on-prem app and hosting it in a data centre. It’s really the physical movement of a computer from here to there..

“That’s not cloud. That’s not SaaS. So I’m not sure that we really think of them as a core SaaS competitor.”

Yes, that is actually true. This lack of multi-tenant capability and the fact that S/4HANA, as with ECC, will require customization for the vast majority of companies that use it means that it will not meet the technical definition of being a cloud. It will be hosted. SAP uses the terminology “private cloud” to obscure this fact, but a private cloud is hosted, and offering hosted ERP is not what Wall Street wants SAP to be moving to. This is covered in the article, Why S/4HANA is a Poor Fit for the Cloud.

Hasso Answers with a Personal Attack

“Plattner had earlier stated that “in the cloud is our version to aim for” when it comes to getting customers onto its next generation ERP solution S/4HANA, which works on top of the in-memory HANA database.

Later on, during a Q&A session, he responded to the criticism from Hurd by saying that Oracle is a competitor and that Hurd is “not a software guy”, before going into detail for how he sees SAP’s S/4HANA cloud strategy playing out now that the ERP system can be run on the three most popular public cloud providers (Google, AWS and Azure), as well as SAP’s own private Enterprise Cloud offering.”

So that is a personal attack rather than a counter-argument. What Mark Hurd said happens to be true.

S/4HANA can be run on three popular cloud providers (although this contradicts SAP’s earlier strategy of competing and beating AWS and others), but that does not address what happens when the system requires customization. Will Google, AWS, and Azure offer a hosted/private cloud for S/4HANA? If so, won’t the price have to increase?

This is a common strategy by SAP to describe what “can be done” rather than what is likely to be done or what makes sense.

“Plattner, who can only make strategic recommendations as chairman of the supervisory board at SAP, admits that the company is still in the process of adapting to the software-as-a-service (SaaS) model. “For forty five years the customer has operated the system, large systems. We do it now together with the customers and SAP is learning how to operate and we are getting better and better and we are getting profitable now,” he said.

Why Companies Will Use Hosted for S/4HANA

“Although Plattner says that SAP now gives customers the “full spectrum” of cloud ERP options, he naturally believes that running S/4 with SAP is the better option for customers. “HANA Enterprise Cloud has more traditional flexibility for the customer, in the HANA public cloud there are more restrictions,” he said.”

Right, most customers will need to customize S/4, so they will need to move to the HANA Enterprise Cloud. The HANA Public Cloud is only usable for companies that have no customizations. Isn’t this basically what Mark Hurd said at the beginning of this article?

Plattner reiterated that what makes SAP’s approach to AI and machine learning unique is that customisers have all of the important business data right there underneath them, in the SAP transactional systems, and they don’t have to ferry data outside of core systems to run algorithms out at the edge.

He said: “It is the age of AI but we do it inside, we do not run around with our valuable data and go from system to system.” Plattner added that keeping the data in one place is the best way to safeguard it.”

There is no evidence that Leonardo is anywhere right now. 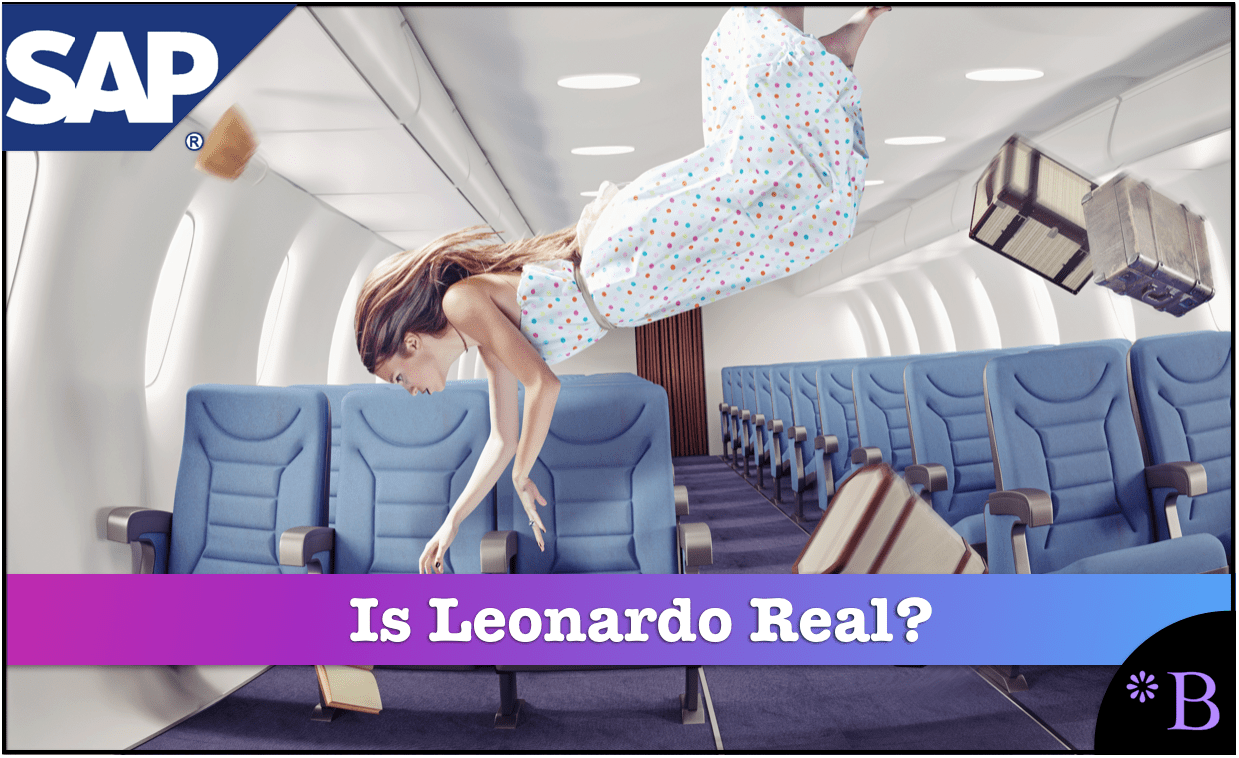 This is covered in the article Why SAP’s Leonardo Seems so Fake. SAP has shown no evidence it is even in the game for AI or machine learning. And SAP may have a different approach to these things, but where is the proof of any payoff?

This is a standard article by ComputerWorld and its parent company IDG. It allows SAP to say anything they like, and they offer no filter. ComputerWorld serves as a repeating mechanism for SAP. They may be paid by SAP, but they also are compensated by online ads. This would not necessarily be a problem, but they don’t seem to put any effort into writing articles.