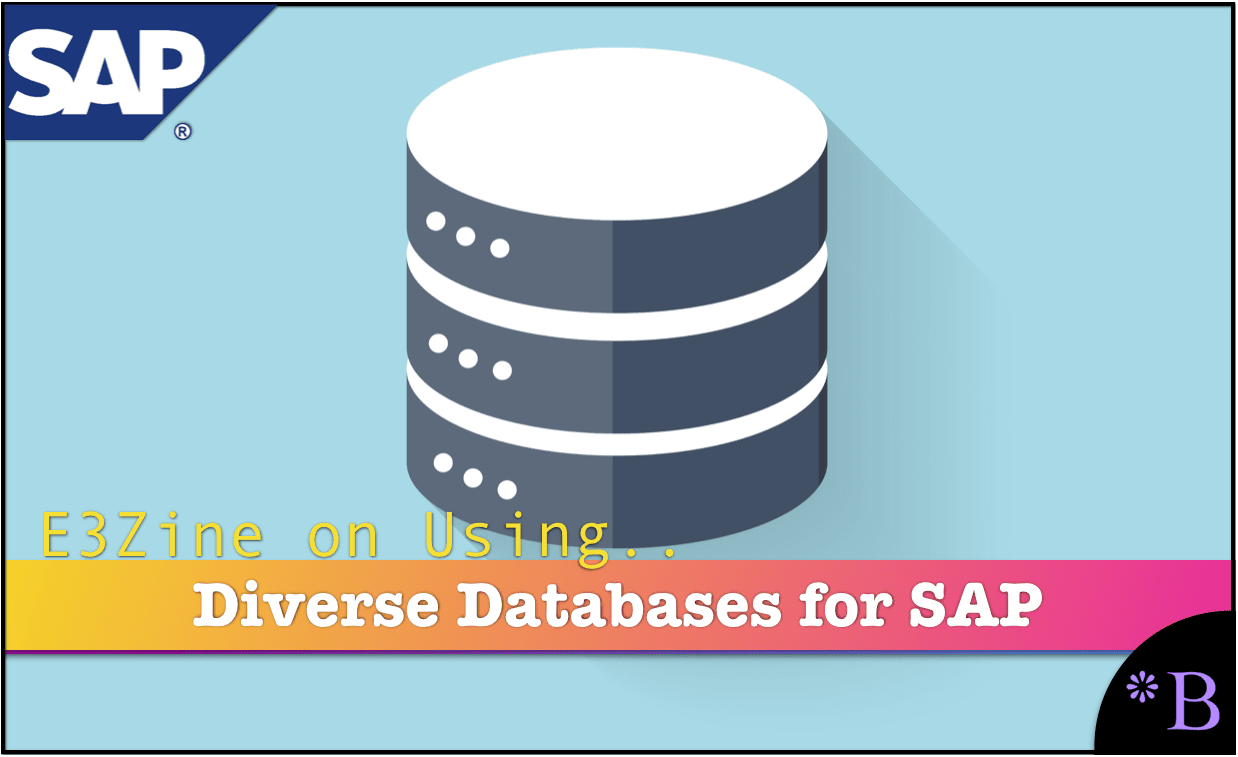 On Mat, 2017, e3zine produced the document titled Diversity is the Way to Go.

In this article, we will evaluate the accuracy of this e3zine article.

Hardly anyone wants to setup to change — apart from SAP itself. A survey conducted 18 months ago showed that the SAP portfolio customers that are organized in DSAG in Germany, Switzerland, and Austria are largely based upon the classical model. – E3 Magazine

Yes, customers seem to have an appetite for changing their database for the BW, but that seems to be the extent of it.

HANA as Disasterous for Customers?

The E-3 Magazine invited IBM and Oracle to meet their editorial team in Munich for a database roundtable. A HANA symposium organized by the DSAG e.V. shows that SAP’s current development version of the HANA in-memory computing database is disastrous. Existing companies are totally overburdened by faulty HANA software code.

This is, of course, what is not learned from listening to so many people that propose the benefits of HANA.

HANA was released too early and was not mature when released. This leads to a series of compromises and to having to rely upon many components that make HANA the highest maintenance database on record. Secondly, as stated by Bloor Research, HANA 2 is not compatible with HANA (1).

There has been a partner ecosystem, which created immense value, jointly. Is this still the case? Nowadays SAP talks about partners but mostly regards them as “routes to market.” – Mezger

True, SAP has moved to be increasingly extractive, and this feedback comes from every SAP partner that I speak with.

That shows Oracle’s dominance in the SAP application space and how much SAP’s introduction of HANA was a direct salvo against Oracle.

..customers want to benefit for advances in technology without destroying man years of consulting investments into their current systems. Here I am thinking of the massive modifications which SAP customers must undertake on their systems to obtain needed functionality for their individual business model. We have done a lot of work in this area, such as DB2 BLU in the SAP BW environment, which is our in memory technology. We are very ambitious wiht our new HTAP or Hybrid Transactional Analytical Processing strategy. – Mezger

This is what SAP does not want customers to be aware of. Oracle, IBM, and Microsoft have all added column oriented capabilities as well as increased the in memory capabilities of their respective RDBMSs. HANA is no longer differentiated based on functionality in the marketplace, but it is the highest cost database and has the highest maintenance overhead of any of them.

Customer projects are being delayed and often — not least as a result of the huge amount of pressure being exerted by SAP’s sales team — the customer is “successfully” being sold HANA, but it is not being productively used nor is it featuring in customer’s plans for the near future. SAP has always been an open technology thati s now, you have say, being “closed in” by HANA and especially by S/4 – its a vendor lock in scenario. – Kuppler

True, HANA means more complexity and more cost and more pushed deadlines than any of the other alternatives.

ASUG as a Promoter of S/4 on AnyDB to SAP?

I beleive that the DSAG in Germany and in particular ASUG in the USA will continue to sing the same tune and will call for S/4 Any DB! – Kuppler

That is interesting because I don’t recall ASUG singing that tune. If anyone has evidence to the contrary, please comment. But ASUG lacks independence from SAP and is now a marketing arm of SAP. When topics move to confrontations between SAP the customer, ASUG chooses to obscure the issue and to moderate the disagreement behind closed doors.

Oracle Datbase In-Memory has proved to be very popular. In a benchmark – not certified by SAP – this option acheived figures better than HANA. And that is not all, SAP customers using Oracle Database In-Memory spare themselves from expensive new hardware, complex migrations and a second database license. – Kuppler

SAP will not certify a benchmark that shows other databases beating HANA. This is covered in the article What is the Actual Performance of HANA.

Back in 2013, IBM launched DB2 Blu, a column oriented version of its database. How did the SAP market take to this technology. – E3 Magazine

Our customers have confirmed to us acceleration by a factor of 55 for SAP BW queries, for example, and substantial storage space savings thanks to efficient compression like further 63 percent on data that has already been compressed, all coupled with attractive licensing and operations costs. This is the advantage of open competition and I would call on the community to exercise their right to compare products!

SAP now lacks objectivity in benchmarks because it plans to stack the deck in favor of HANA. However, SAP cannot compete with Oracle or IBM on database technology. This is obvious from both project feedback and also from the fact that SAP refuses to engage in a real comparison with HANA.

SAP has announced the dealined for using the SAP NetWeaver based Business Suite with AnyDB. As of 2025, they will no longer be providing support for the Suite on AnyDB. What will happen before this date? What do you think customers may do? – Kuppler

By stating when they will withdraw support, SAP has drawn a line in the sand. As it has already been said, the market will decide whether the goals will be acheived by 2025 or not. If the rate of switching from AnyDB to HANA or S?4 does not speed up in the long term, we can assume a much later date. – Kuppler

SAP is not a big fan of the market or competition. SAP locks in customers to their product. They learned how to do this from IBM. IBM was the lock-in king before SAP. IBM is not a big fan of competition either. If they were, they would not acquire so many software products. It is curious how one monopolistic vendor calls out another monopolistic vendor when they are losing business because of it. And does so without a hint of irony. But is IBM actually in favor of the FTC enforcing US antitrust law? I ask because IBM would also be on the list.

What are your plans? – E3 Magazine

Oracle will continue to support the SAP Business Suite and SAP BW for as long as SAP intends to do so in any case. Oracle can confirm that SAP is also able to support the Oracle database for SAP customers until 2025 and beyond. SAP wanted to use HANA to create various unique application selling points i.e. functionalities that only benefit HANA users. Its a fact that SAP customers emphatically also want to see these functionalities in a “non HANA environment.” And what has happened? The Core Data Services and HANA SP BW optimized InfoCubes — also known as FlatCubes at oracle — can be used in conjunction with Oracle Database In Memory, see SAP Note 2335159. – Kuppler

SAP customers who are running both ECC and BW with HANA are very, very rare and are a bit of a “black swan.” For more information, please visit… – Kuppler

There is an excellent reason for this. There are very few S/4HANA implementations and I cover this in the article The Math of Probably S/4 and Fiori Usage.

This was an interesting article. It is not an objective article because IBM and Oracle spokespeople are, in many cases presenting their case why their databases should be used. I removed a lot of the promotional quotations. However, many of the comments about HANA are accurate, and it is interesting to see Oracle and IBM challenge SAP so specifically. This is evidence that Oracle and IBM are not going to continue to allow SAP to control the discourse of HANA as they have up to this point.