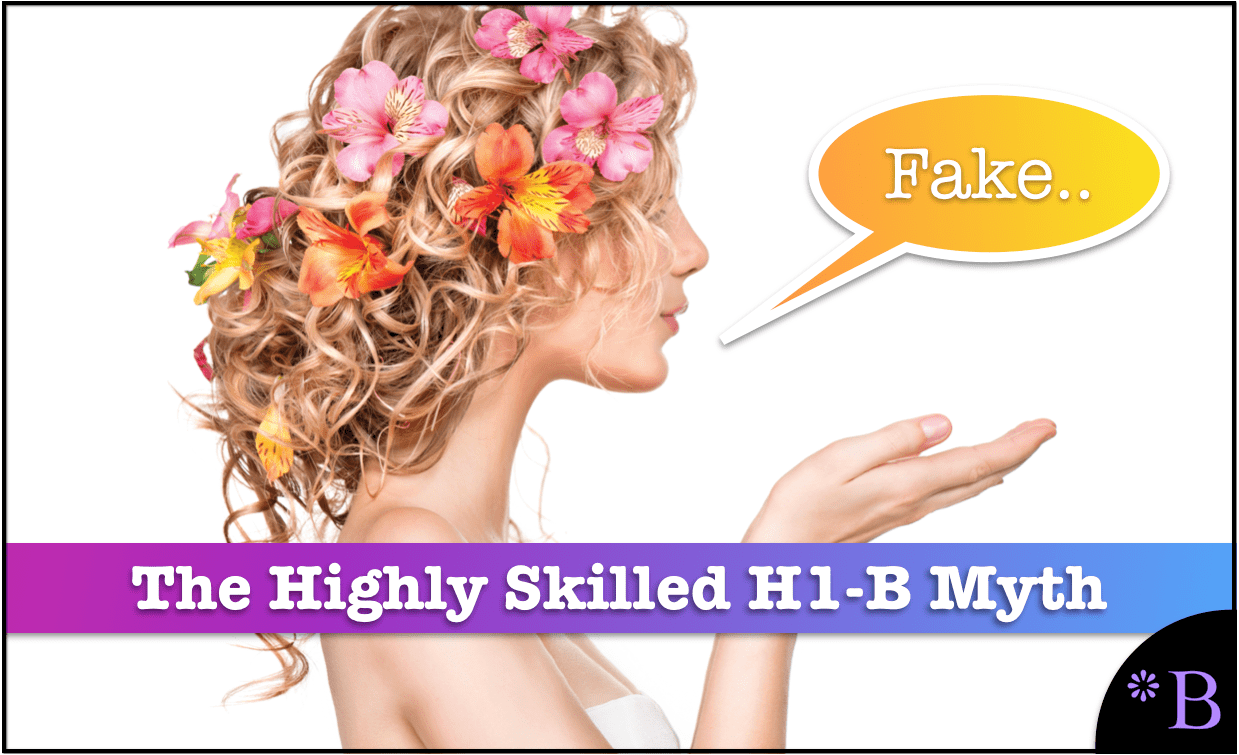 This is from Ron Hira, of the top researchers in the area of H1-B.

During the FY10-12 period, 78 percent of Tata’s and 85 percent of Infosys’s H-1B employees held only a Bachelor’s degree or less.

Finally, there’s also no evidence that Tata and Infosys are using the H-1B to retain foreign students who studied and earned an advanced degree in the United States: Only 1-in-206 of Infosys’ H-1B workers held an advanced degree from a U.S. university, and even less of Tata’s H-1B workers did, just 1-in-222. (See Table 3) – Economic Policy Institute 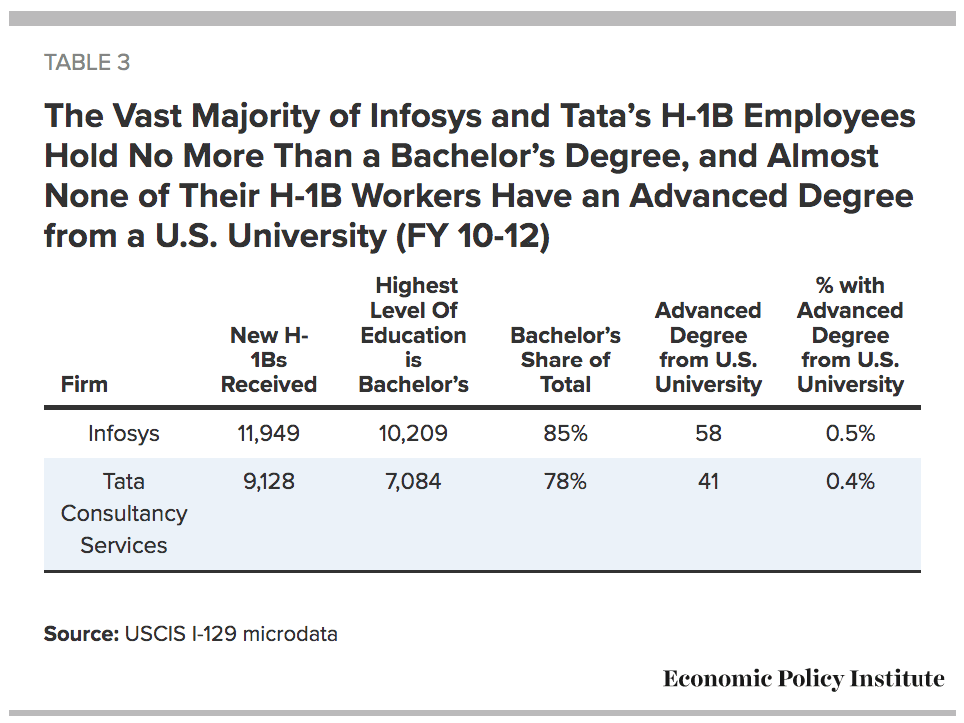 This is also reinforced by the following quotation.

Indian outsourcing firms have used the two main employment visas (H1-B and L1A/B) to bring into the US hundreds of thousands of Indian workers with primarily bachelor degrees from Indian universities. This has created a backlog of Indian applicants waiting to get green cards. The passage of HR1044 would crowd out applicants from other 190 countries — who are more likely to have attended US universities — from getting green cards for the next 12 years. – No On 1044

This is also covered by Dr Norm Matloff.

The tech industry lobbyists portray H-1B as a remedy for labor shortages and as a means of hiring “the best and the brightest” from around the world. Though I strongly support that latter goal, the lobbyists’ “best and brightest” claims are not valid. The vast majority of H-1Bs, including those hired from U.S. universities, are ordinary people doing ordinary work, not the best and the brightest. On the contrary, the average quality of the H-1Bs is LOWER than that of the Americans. Furthermore, vast majority of H-1Bs, again including those hired from U.S. universities, are not doing work for which qualifed Americans are unavailable.

Instead of being about talent, H-1B is about cheap, immobile labor:

The Actual Standards of H1-Bs is Quite Low

What gets extremely little coverage around the H1-B program is how the low the standards are to qualify.

There are three steps required to get an H1-B visa. First, the employer files a Labor Condition Application (LCA) with the Department of Labor. The LCA certifies that an employer will comply with all the labor protection requirements of the H1-B program. The media often use inflamed terms such as “best and brightest” and “high skilled” to describe H1-B workers. In reality the standards are low. A bachelor’s degree, even a mail order one from an Indian diploma mill, is all it takes to qualify.

As tech journalist Robert X. Cringley points out, “when Bill Gates complained about not being able to import enough top technical people for Microsoft, he wasn’t talking about geniuses, just normal coders” – Sold Out

The presentation of the H1-B program is false. It is designed to make the H1-B visa holders sound more skilled than they are.

There is a visa for the world’s truly talented high achieving called the O visa, which is uncapped and available only to “individuals with extraordinary ability or achievement” in the fields of “sciences, arts, education, business, or athletics or who has demonstrated record of extraordinary achievement in the motion picture or television industry and has been recognized nationally or internationally for those achievements.” Google, Apple, and other top tech companies will take as many of the O visa candidates as they can get, but there are just not that many who qualify, which is why quotas aren’t required.” Cringely explained. “So when Microsoft — or Boeing, for that matter — says limitations on H1-B visas is keeping them from getting top talent, they don’t mean it in the way that they imply. If a prospective employee is really top talent — the kind of engineer who can truly do things others simply can’t–there isn’t much keeping the company from hiring that person under the O visa program. H1-B visas are about journeyman techies and nothing else. – Sold Out

This is also reinforced by the following quotation.

Technology sector employers, who represent the largest share of H-1B visa users, tell the public that the H-1B program is vital to their ability to find the highly skilled workers they need. Yet Department of Labor data tell a different story.

Previous studies have found that the H-1B program is primarily used to import low-wage workers.1 This report examines the most recently available wage data on the H-1B program and finds that the trend of low prevailing wage claims and low wages continues. In addition, while industry spokesmen say these workers bring needed skills to our economy, on the H-1B Labor Condition Applications (LCAs) filed with the Department of Labor, employers classify most of their H-1B workers as being relatively low-skilled for the jobs they are filling. This report compares prevailing wage claims and wages employers reported for H-1B workers in computer programming occupations in FY 2005 to wages for U.S. workers in the same occupation.

Very few H-1B workers are “highly-skilled.” Employers who used the Department of Labor’s skill-based prevailing wage system classified most workers (56 percent) as being at the lowest skill level (Level I) as did most State Employment Security Agency (SESA) wage determinations (57 percent). This suggests that most H-1B computer workers are low-skilled workers who make no special contribution to the American economy, or that employers are deliberately understating workers’ skills in order to justify paying them lower salaries. – CIS

Neither Infosys nor Tata nor any of the other top firms that apply for and consume the vast majority of H1-B visas are known for innovative work. What they are known for are low standards and low costs.

H1-B proponents, who are primarily driven by the excessive margins made on H1-B labor, and the high degree of control over H1-B workers, have universally framed the discussion on H1-B labor around the need for “skills.” Analysis of H1-B employees clearly shows that this is not the primary reason for the importation of H1-B labor. As we cover in the article,  Is There an IT Skills Shortage That Necessitates H1-B Visas? There is no evidence for a skills shortage in the US.