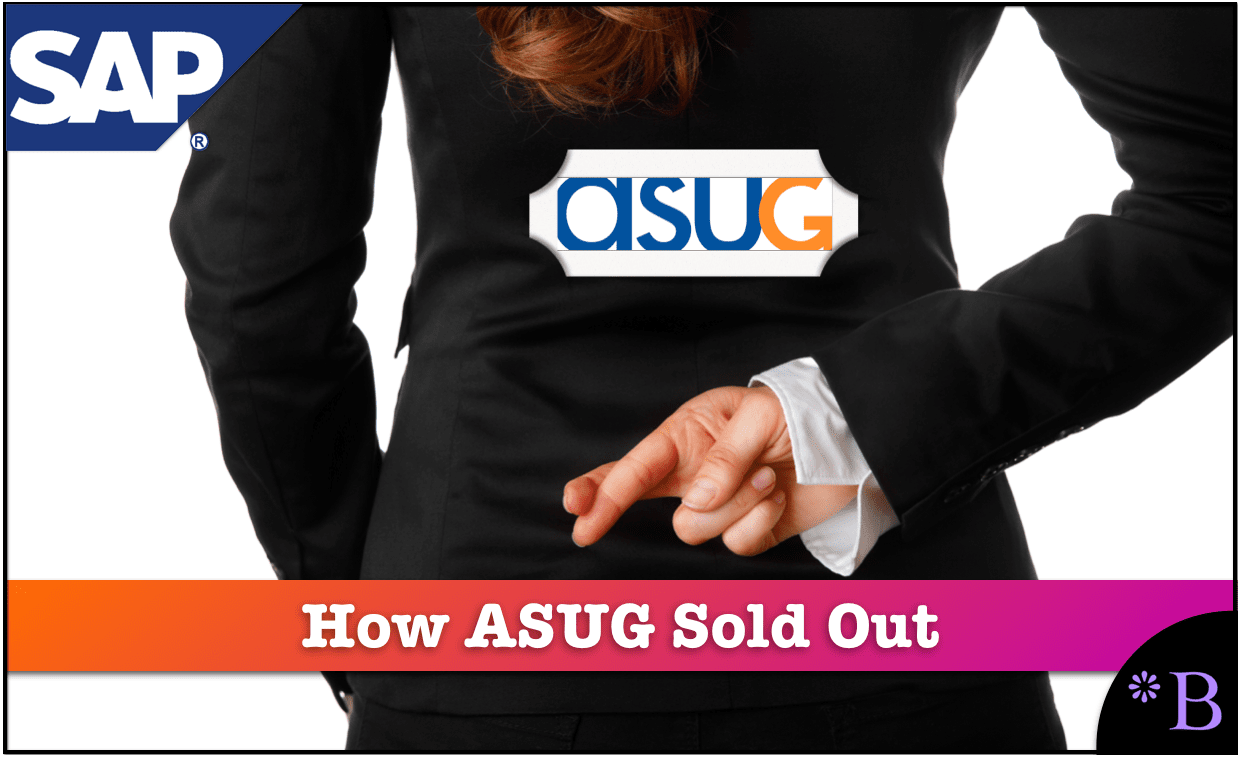 Video Introduction: How ASUG Lost its Way and Sold Out to SAP

ASUG began its life as a user group, which meant that it represented the interests of SAP customers. However, it did not take long for ASUG to become captured by SAP. ASUG now functions as simply a marketing arm of SAP, and the information they provide to SAP customers is unreliable as it is undifferentiated from what SAP provides to their customers. You will learn that with ASUG pretending to represent user’s interests while putting SAP’s interests first, why the information that ASUG provides to the market on SAP topics is unreliable.

I spend a lot of time analyzing the media output of entities in the IT space. My observation of ASUG’s media output is the following:

All of this is strange for what is ostensibly a user group. This article will explain what has happened to ASUG.

The Origins of ASUG

ASUG was founded in 1991 as a user group. At that time, SAP customers needed a forum to share their stories, concerns, feedback to SAP, etc… One should also remember that this was still relatively early in the development of the Internet, and nothing like the ability to share and consume information existed at that time. For many users, ASUG was the primary avenue for obtaining information about the reality of SAP implementations, and it added quite a lot of value.

I have not performed a detailed review of people that attended ASUG events or consumed its media at that time, and this time also preceded by involvement in SAP by about six years. Yet, what I can ascertain from interviewing various people who have participated with ASUG for some time is that ASUG actually did a good job of meeting its user community’s needs and that it also did serve as a mechanism to provide feedback to SAP.

How ASUG Changed Over the Years

It is difficult to pinpoint the exact time when it happened, but ASUG became captured by SAP over time in some shape or form. SAP has powerful ways of corrupting any entity if it wants to, and ASUG has been no exception. Changes at ASUG have demonstrated a nearly continuous encroachment into ASUG’s plan to meet SAP’s needs. Examples include the following:

Changes at ASUG have demonstrated a nearly continuous encroachment into ASUG’s agenda to meet SAP’s needs. Examples include the following:

Frequent presentations that are ostensibly designed to keep customers up to date on what is new and coming down the pike from SAP have turned into sales presentations. However, ASUG events did not start that way, but sales presentations have become much more prominent as time passed. SAP always had SAPPHIRE and other events to present their new products or to promote current products. SAP performs what product pitches disguised as “updates” at all the events, with ASUG being no exception. Consulting companies are also thick on the presentation docket at ASUG events.

It is interesting to see users/customers at ASUG events presenting things they accomplished that are impossible to accomplish. This includes SAP applications that could not support the workflow that the user states are supported or entirely unrealistic implementation timelines. This is something I faced in particular while performing research into S/4HANA implementations. ASUG has several false testimonials about S/4HANA on their website. However, the false testimonials have become so extreme that I have developed a term that I hope catches on called conference monkeys.

Conference monkeys will say anything at conferences and mislead other users to improve their career or their relationship to SAP. SAP has a way of making it “worth their while” to exaggerate or otherwise mislead on what was accomplished.

In addition to the presentations being strangely positive in their outcomes, cost, and timelines, ASUG is now actively censoring presentations given by users who did not get the memo that they are only supposed to present positive information. All SAP software issues must be framed as “challenges” rather than problems or things that did not work. For example, Johnsonville Sausage broke the rules and presented on their S/4HANA implementation experience, which turned out to be quite problematic. ASUG did not put this particular presentation on its website. (Surprise surprise.) However, if ASUG is truly a user group, why would it censor negative information about SAP?

Wouldn’t it want its user community to know about problems so that other users could learn from them? And this is the problem ASUG faces.

If they are responsive to users, then they upset SAP. And SAP can apply pressure on ASUG behind closed doors to keep the ASUG events “upbeat.”

The ASUG events were originally for users/customers. And in the early years, they tended to be limited to those people. But today, ASUG events have become infested with consultants and salespeople. As an SAP consultant, I have frequently been told to attend ASUG events and even present at ASUG events. One salesperson I know was frequently made to go to ASUG events by their boss. The idea being that ASUG events are a good place to get business. Yet, again, that is not what ASUG was originally intended to be. This means that users interested in getting information from other users will spend more time in the company of consultants and salespeople than other users. All while these salespeople and consultants are trying to fill their quota at a “user conference.” At a recent event attended by a contact of mine, they estimated that 90% of the attendees were either salespeople or consultants.

How ASUG Poses as a User/Customer and SAP Mediator

ASUG does not criticize SAP or state things that SAP should change. But when topics such as indirect access arise, ASUG promptly papers over any conflict by discussing coming to amicable resolutions, but invariably these resolutions are on SAP’s terms. ASUG also understates the frequency with which problematic issues arise on SAP implementations.

In this way, ASUG is working against its users’ interests because it is posing as something it is not, which is either an independent entity (which it is not) or an advocate for the user/customer (which it is certainly not!). This means that ASUG is lying to its members, and strangely, the members have to pay to be an ASUG member. How strange that even if you pay ASUG, you can’t rely upon ASUG to take your side.

For example, on the topic of indirect access, ASUG has published articles that encourage users to reach out to ASUG to gain access to their indirect access “expertise.” However, by doing so, the customer may be exposing themselves to SAP. ASUG is not under any obligation to not merely share the information that is shared with ASUG with SAP and given where ASUG’s loyalties lie, that seems actually like a likely scenario. If I were a customer, I would be concerned about sharing any information with ASUG. ASUG can’t help users with something like indirect access because it is opposed to the interests of SAP. And ASUG’s first loyalty is to SAP.

If I were a customer, I would be concerned about sharing any information with ASUG.

What began as a user group isn’t a user group anymore. Sure, ASUG user members meet at ASUG events, but the entire focus of the event has shifted away from users and their concerns and how to help SAP meet its sales objectives. ASUG members pay for a membership, but ASUG no longer represents their interests versus SAP.

SAP has capture ASUG to the degree that ASUG is primarily about “making SAP” look good. This is pure and simple corruption. ASUG is misleading its members by presenting itself as a user group. And that is the reality of what ASUG has become.