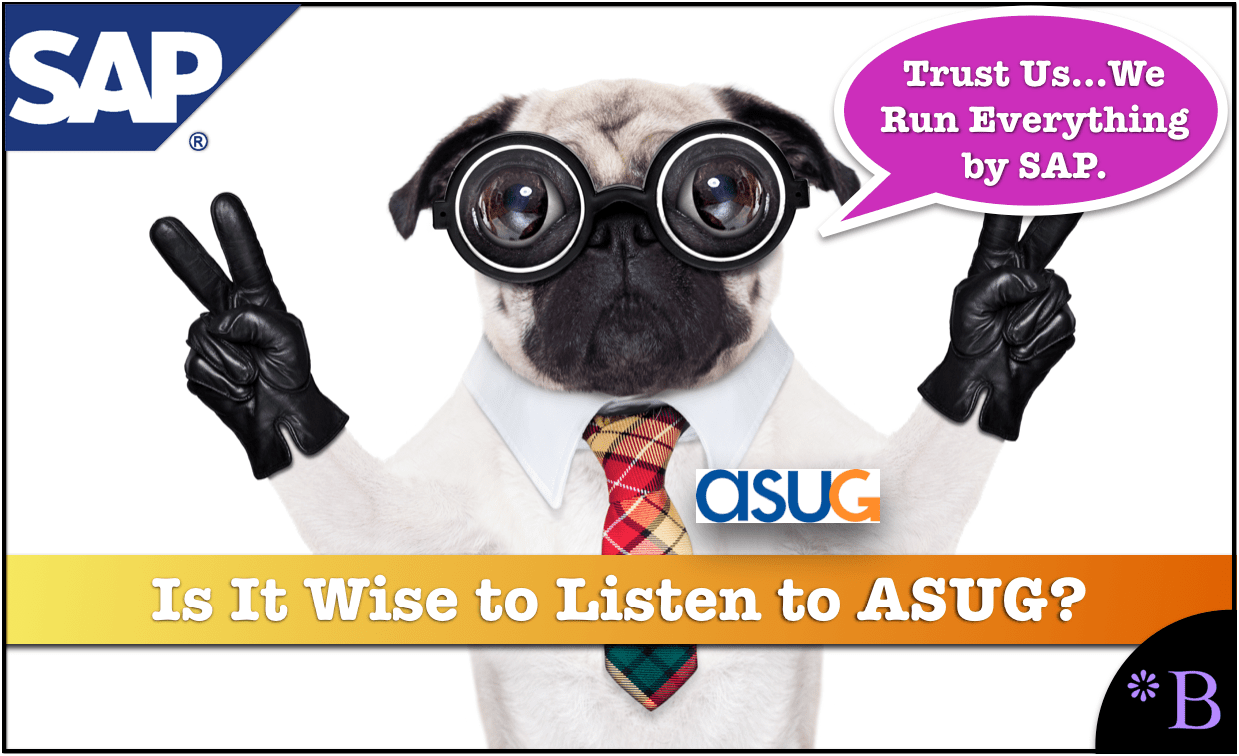 In this article, we will cover yet another inaccuracy presented by SAP and repeated by ASUG. This has to do with estimating the number of live customers for S/4HANA by a specific date.

The following is from the ASUG S/4HANA Adoption Survey of 2016.

ASUG on the Obstacles to S/4HANA Adoption

“When it comes to the top obstacle to S/4HANA adoption, our survey drew no one clear answer. Of the 550 respondents to the question, 18 percent said it was unclear how S/4HANA benefits their specific organization. In joint second position, at 15 percent apiece, were lack of a clear general-purpose S/4HANA road map and lack of in-house S/4HANA skills. Not far behind, at 14 percent, was not enough live S/4HANA customers, which we’ve heard voiced regularly by ASUG members who would like to see S/4HANA live customer figures in the thousands rather than the hundreds before they commit their organization to moving to the suite. SAP tells us it expects to reach those levels of live S/4HANA customers by SAPPHIRE NOW and ASUG Annual Conference, in May 2017.”

In the Brightwork article How to Best Understand ASUG’s S/4HANA Adoption Survey dated 03 30, 2017

I stated the following:

“S/4HANA will not meet those number of live customers by May 2017.”

If one looked at the pattern of reported go-lives for S/4HANA, there was nothing in August 2016 that would have supported SAP’s prediction that they would reach go-lives in the thousands by May of 2017.

Let us compare that to what happened. 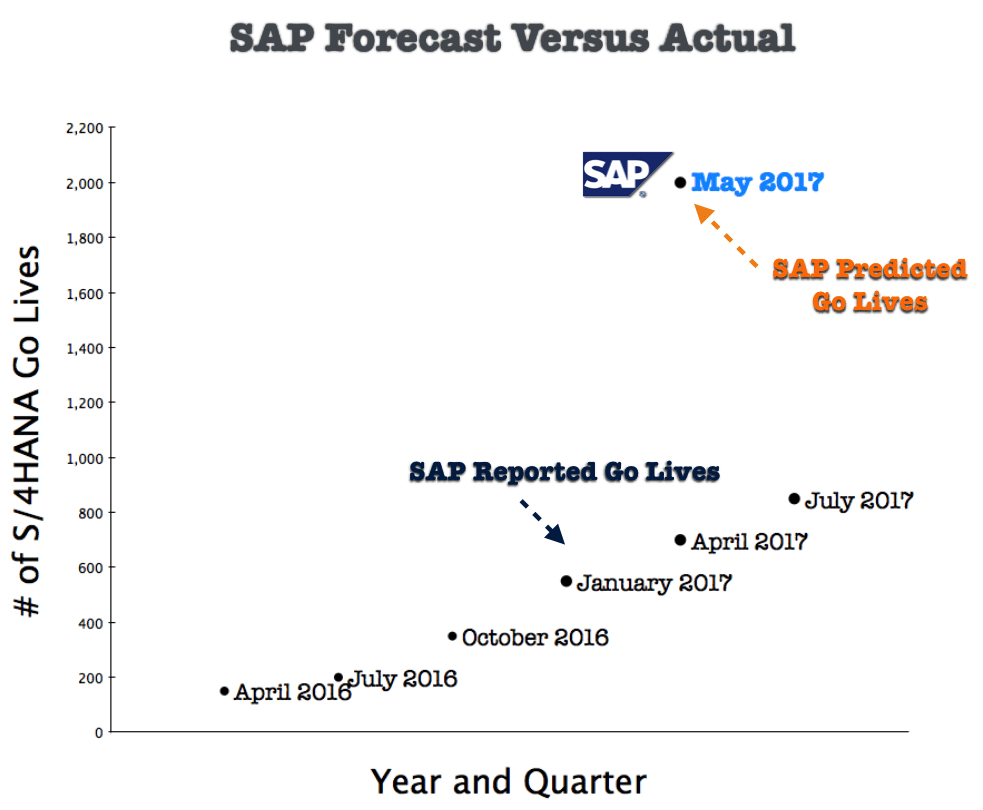 SAP’s forecast accuracy For May of 2017 was 2000 (SAP stated to ASUG they would have S/4HANA go-lives in the thousands by May 2017 — which I have translated to 2000. Although “in the thousands” could be 3000. But to give SAP the benefit of the doubt, I kept it to the lowest possible number that would still meet the definition of “in the thousands.”)

In several Linked In comments as of late, individuals that make their career in SAP and are SAP biased frequently accuse that Brightwork is biased. The accusation of bias is easy to make. However, it is curious when the person making the accusation has an easily traceable income stream to SAP. A verifiable income stream is the most predictive element to forecast bias. For example, the sales forecast is the least accurate input of all the inputs to the forecasting process. I cover this in detail in the book Sales and the Statistical Forecast Combined.

The accusation of bias is easy to make. However, it is something else to prove bias. Bias means that what a person or entity says and what they predict is consistently inaccurate in either a positive or negative direction. Yet, SAP and ASUG are always positively biased.

Biased can be measured mathematically when predictions are made that are quantitative. In this case, SAP’s forecast had an error of 185%, and it wasn’t very objective.

This is always the way SAP predictions work.

The Importance of Verifying SAP’s Predictions

A trend line off of the data points available to ASUG when the prediction was made would have easily shown that this forecast by SAP was doubtful. The last published data point available to ASUG in their August 2016 adoption study was 350 go-lives. S/4HANA had already been available for a year and a half at that point. Why would ASUG think that SAP would increase its go-lives by over 1650, which would have been a 470% increase in 8 to 9 months?

SAP is consistently positively biased. SAP stated that Oracle was finished on SAP, that HANA was the fastest database globally, that it would take over the CRM market, that it would effectively compete against AWS in the PaaS market (see this article on the Multicloud).

All of these things were covered uncritically in the major media outlets.

None of these things came true.

If one could describe a perfect audience for SAP’s forecasts, it would be a group of amnesiacs.

It is interesting to observe that no one from Accenture, Deloitte, or other SAP surrogates seems to care if SAP is biased. They collectively will not tolerate if a person or entity observes this and makes a prediction that does not match with SAP’s positive bias. As soon as any entity questions the accuracy of SAP’s statements, then at that point, the person making money from either selling SAP licenses or consulting services levels the claim of bias.

It is quite hypocritical for entities with a 100% bias in favor of SAP, accusing entities (like Brightwork) of being biased when, unlike SAP surrogates, we do not obtain revenue from vendors that compete with SAP. Naturally, SAP surrogates’ forecast accuracy is similarly inaccurate as they serve primarily as passive repeaters for messaging and prediction, which is developed at SAP and released to the surrogates.

Redefining the Definition of Bias

The standard definition of bias is simply unacceptable to SAP surrogates. So it is back to the drawing board to create an entirely new meaning. It is a definition where their strong financial incentive to promote SAP is not biased; it’s “looking out for the client’s interests.”

For SAP surrogates, bias is information that is not explicitly promotional of SAP.

When asked directly to vouch for Hasso Plattner’s previous statements, Bill McDermott, Vishal Sikka, Bill Enslin, and others, comments that are now clearly inaccurate, the SAP surrogate swiftly pivots back to why Brightwork is biased.

According to how ASUG reports, SAP never lies or provides false information about their applications. How can ASUG credibly hold this view? What evidence is there, aside from ASUG declaring it to be true that ASUG looks out for their member’s interests?

Virtually all of the global SAP user groups are just like ASUG, with only DSAG for the German-speaking countries challenging SAP when they do bad things for customers. Now ASUG did not start like this, but it is where they are at this point in their history.

This is not only ASUG’s approach. ComputerWeekly, Gartner, Forbes, Fortune, Deloitte, Accenture all also do the same thing. They quote SAP. And very rarely question the information. And when the data ends being wrong, they don’t go back and explain that SAP previously misleads them. That is why none of them can forecast SAP because they are all on the take from SAP.

How SAP Misleads in Multiple Dimensions

Up to this point, I only pointed out that SAP widely missed its forecast of having thousands of live S/4HANA customers by May 2017, as per the officially reported figures.

However, the official numbers of 850 live S/4HANA customers reported by SAP are also false.

SAP has probably very few numbers of customers who live on S/4HANA due to the application’s immaturity. This is not to say S/4HANA implementations have not been attempted. It is not to say that tiny areas of S/4HANA are being used for “something” or that there isn’t a demo environment set up for customers. But truly live customers for S/3HANA? That number is so small it is barely worth discussing.

But uncovering that fact would require getting into some detail, doing research, and in the end, it would all be for nothing…… as it would hurt these media outlet’s ability to get money from SAP. In this way, these media outlets pretend that they represent the interests of their readership. When, in fact, they represent the interests of those that pay them to publish.

Strangely there is no other vendor that receives such universally positive coverage as SAP. All the large vendors obtain a media advantage over smaller vendors. That is an unfair system, which shows the dangers of allowing concentration in sectors of the economy. There is no other vendor, not IBM, not Oracle, not Microsoft, that can publish inaccurate information so consistently, and eventually not fact some blowback from it in the IT media. This is why we like to say at Brightwork that we almost have the market on providing the real story on SAP to ourselves. The other entities that call out SAP on inaccuracies being

Yet if the combined web traffic of these three entities plus Brightwork on SAP topics (Nucleus Research publishes on many issues, not just SAP, and Rimini Street tends to focus on areas of SAP reality that relate to support) and compare it to the web traffic of the pro-SAP cheerleaders in IT media, the size of the reality-based output would pale by comparison.

There is something about SAP’s total IT media control and control over so many consulting companies (who are also major providers of information to the IT marketplace – although not in a public forum) that is contradictory to the foundations of the US system of speech and the press. When a single entity has so much control over what people are told and what they read on a subject, that is not a diversity of thought; it is totalitarian. The fact that so much of it is false makes, of course, that much worse.

ASUG is another puppet of SAP that cannot challenge anything that SAP says. ASUG is an interesting case study in how an entity that begins as a user group transforms into a vendor’s marketing outlet. What is curious is that ASUG members pay for the privilege of receiving information from an entity that does nothing more than serving as a passive repeater for SAP marketing.