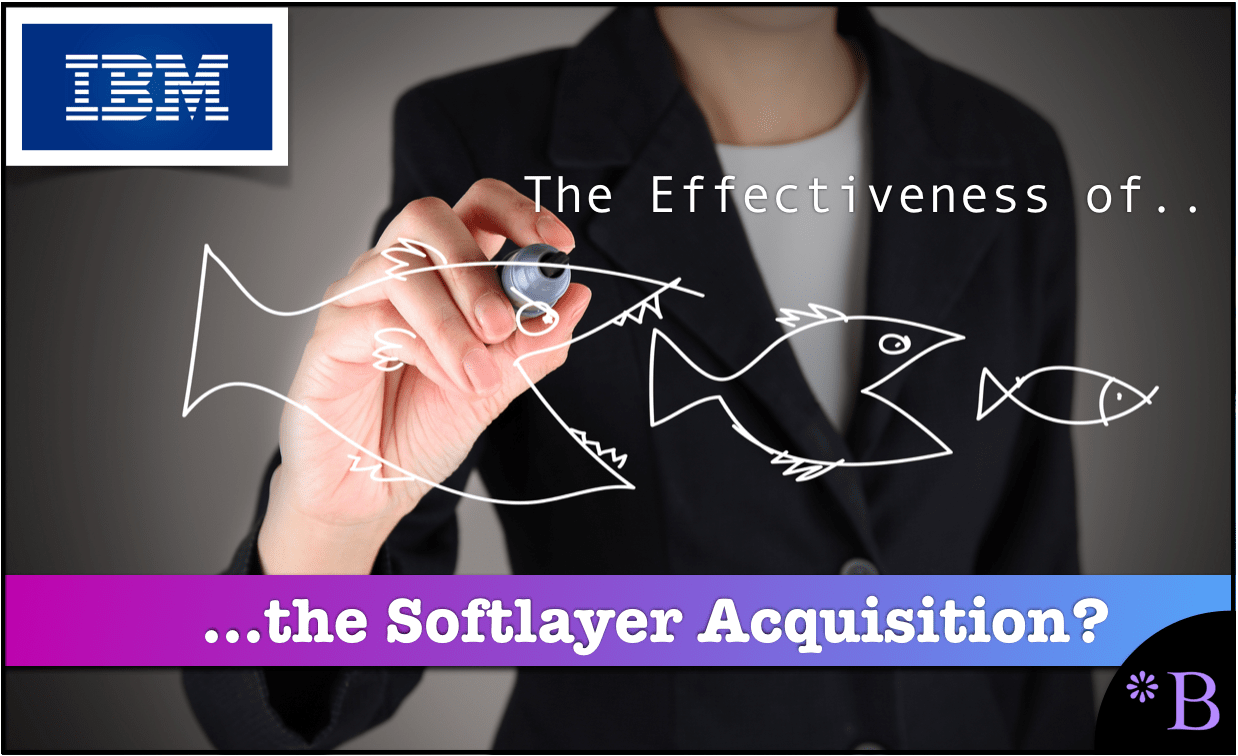 AWS and Google Cloud focus on driving internal efficiencies to make it very difficult for the mega-vendors like Oracle, SAP, IBM, and Microsoft to compete. The only one of these vendors that is even close is Microsoft with Azure, and this has far less to do with the quality of the Azure offering than just because of Microsoft’s built-in customer base. The IBM Softlayer acquisition exemplifies the competitive maelstrom that AWS and Google Cloud have created. The previously independent Softlayer was a high-end cloud service provider focused on dedicated servers and custom configurations that IBM acquired to boost its cloud profile in 2013. IBM thought that Softlayer’s 25,000 customers would be an excellent source of lead generation for other IBM products. Later in the Red Hat acquisition by IBM, we will see how acquiring customers is a primary motivator. Yet, even with IBMs resources, Softlayer went into a rapid decline after the IBM acquisition.

What Was Softlayer’s, Sweet Spot?

Softlayer’s primary differentiator was upper-end servers. SoftLayer, a company that had the potential to compete, from a technology perspective, with AWS. IBM, the story went at the time of the acquisition, would accelerate adoption and scale in the cloud. This was how they stood out in the cloud services market. However, not long after IBM acquired Softlayer, AWS and Google Cloud expanded their offerings into this space. This, along with IBM’s mismanagement of Softlayer, greatly reduced IBM’s Softlayer acquisition value. Softlayer is now another in a long list of failed IBM acquisitions.

“Considering that IBM is worse in every single aspect including but not limited to API availability and documentation, network and DNS services, storage services, etc… there is pretty much zero reason whatsoever to use IBM nowadays.”

What is apparent is that companies like IBM and other major vendors are based on proprietary designs. However, cloud services are based on open-source software and hardware. So when a company, like IBM (or Oracle or SAP), tries to enter cloud services, their first thought is to leverage proprietary designs. This is evident from Oracle’s strategy with Exadata, which we cover in detail later. However, the problem with this is that proprietary designs are not competitive with open source-based cloud services. Therefore, companies that attempt to compete with AWS and Google Cloud using their “secret, proprietary formula” put themselves at a disadvantage. Being acquired by IBM (or Oracle or SAP or Microsoft, for that matter) is like being punched in the face while being asked to compete. It is completely distracting. The acquired company’s focus becomes managing IBM’s (or another vendor’s) interference, dealing with some of the most talented employees leaving and trying to plug holes in the ship.

Of course, when the Red Hat acquisition was announced, we could find no mention of the Softlayer acquisition in the IT media or Wall Street analyst coverage. This is par for the course as analysts are cautious not to hold the mega-vendors history of acquisition failures against them with new acquisitions.

Our View on Red Hat

Our projection is well encapsulated by the following quotation, one of the few we could find that had a realistic perspective on these acquisitions. Mind you. This quotation is from a comment, not from an analyst or member of the IT media.

“Big acquisitions like this always sound good initially, but…..I have found that these kind of deals almost always signal desperation in the C-suite. It goes something like this: “why aren’t we growing?” “We need a plan!” “I know, we’ll acquire a company that seems to be doing well in a congruent space!! This will pump our stock and we will find some way to justify the merger on structural grounds.” Anyone remember SUN Microsystems and Storage Tech? The problem with these “let’s do something big and figure out why later” kind of deals is that the pressures that drove the deal in the first place don’t go away…they become more acute as the financials of the deal ultimately make things worse for the combined company. Yes, hybrid clouds are the coming thing, but does Red Hat really give IBM and edge in this area? Probably not…or probably not quickly enough to prevent bad things from happening to the Red Hat employees who will ultimately pay the price of future efforts to make this deal work financially. If I were a Red Hat employee, I would worry.”

We cover IBM and Red Hat further on as the topic of Kubernetes is central to the discussion of hybrid cloud.