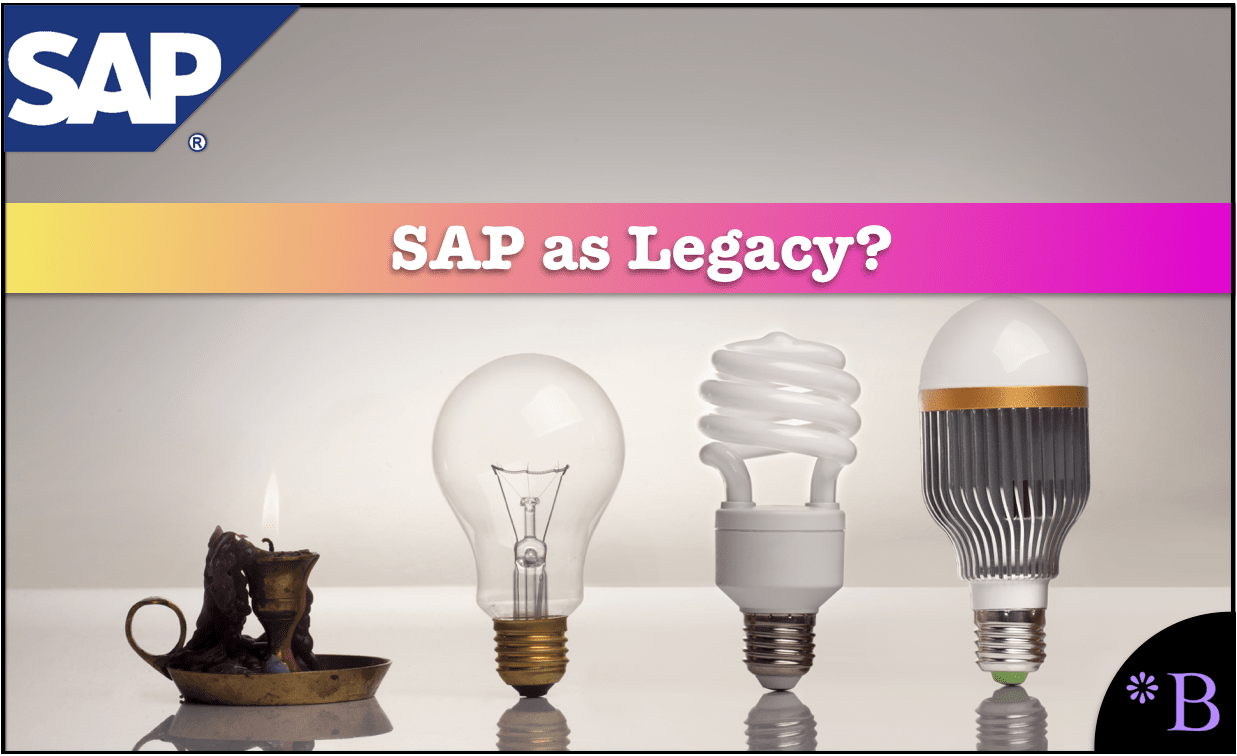 Introduction to SAP as Legacy

In a previous article titled SAP is Now Strip Mining its Customers, I laid out why SAP has reached an inflection point in its history and should now be treated by companies as selling legacy systems. In short form, the most accurate way of thinking is that SAP is legacy. There is a lot of background that is necessary to cover to understand why I have come to this conclusion to retrace the evidence in this article. But please go back to the original article link above if you have not read it.

The Flaw in the Current Interpretation of SAP

For decades now, SAP has been seen as a software vendor with a broad suite of applications that are at least somewhat competitive. The concept was that SAP would bring out improvements in functionality that were important to its customers.

This way of viewing SAP, which has become increasingly out of sync with the reality of SAP, drove everything from SAP software purchases to companies paying what is now a minimum of 23% in support. Yet, under the construct of SAP as legacy, other software vendors have asked me how they can take advantage of SAP’s new phase. This article is for them.

How Other Software Companies React

For other vendors, you now face a crack in the facade or an opening. Brightwork Research & Analysis is early in this analysis. My article on SAP is Now is Strip Mining its Customers is the first article that presented SAP as legacy or even associates SAP with being a legacy system or a set of legacy systems.

Almost all the media entities that cover SAP take money from SAP. Therefore, they cannot bring up this point even if they wanted to.

If you are a software vendor reading this, this reality of SAP as legacy does present considerable opportunities.

Yet does your company know SAP to widen that crack?

Let us review two areas to see how software companies that compete with SAP can follow the wedge.

The Software Company’s Understanding of SAP

I have spoken to many vendors that compete in my time, and in my view, only a small minority understand how to compete against SAP. Most software vendors are very good at focusing on and presenting their value proposition. But they do so often without considering how the chessboard has already been set by SAP before you get to make your case. SAP sets the chessboard that the other software vendors work on in the following ways:

All of these things are present before these vendors even begin to present their value proposition.

It should be noted that much of the information presented through the mechanisms listed above are false. Yet, they are still useful in shaping the views of the buyers. I can come up with an example of how SAP stopped competitors by pitting immature products against established and effective applications by promising future growth in what the application could do.

One example of this is in the service parts planning space.

SAP developed a partnership with MCA Solutions and developed an xApp that worked with MCA Solutions. But they eventually dropped MCA as a partner. SAP took a significant amount of knowledge about MCA’s service parts and launched its SPP product, which was a stand-alone application. (For more detail on the xApp program, see the note at the end of this article.)

For years SAP customers were lulled into going with SPP over MCA SPO because it had the SAP name, would integrate better, etc..

So where are we close to 10 years later?

They future sold gullible clients who decided not to do the basic research into the application that I did.

For competing vendors, you cannot rely upon prospects to do their research on SAP’s products or the SAP products’ overall usage in the marketplace.

I have already listed SAP’s dead or problematic applications in the strip mining article. But as a software vendor, you have to raise the issue of the overall success (or lack of progress) of the SAP application. This is because most SAP customers tend to assume that other customers are having success with the application. They did not have success because of an implementation failure, poorly trained users, etc.. I am amazed how often I go to clients, and they tell me they would like me to fix an issue that is actually a well-known software bug but which SAP support has hidden from them. SAP customers repeatedly attempting to bring functionality online that I have already tested and have determined should not be activated, and it is not useful.

This is how bad the information sharing is on issues is in the SAP space.

The Problem with SAP’s Flexibility

SAP systems significantly reduce the flexibility of their customers. With indirect access, SAP can control which applications are connected to SAP applications. This dawning awareness of SAP’s inflexibility is highlighted in the following quote from the book SAP Nation 2.0.

“When ERP was in its heyday, CEOs and business executives wanted reliable and integrated solutions, so they seized upon ERP as the way to provide….Business stakeholders still want these same qualities, but now they assume that these qualities will be present in any software solution, and their requirements have switched to the twin concerns of lowering IT costs and seeking increased flexibility. A system that is not sufficiently flexible to meet changing business demands is an anchor, not a sail, holding the business back, not driving it forward.”

How the SAP Partner Program Censors Partners and Reduced Competition

A significant part of SAP’s success, probably the most crucial part, is its partner network. There are over 10,000 SAP partners. SAP will partner with just about anyone.

SAP has considerable leverage over SAP partners, as the partners often need or believe they need their certification or partnership credentials to sell into SAP accounts.

There are various SAP certification logos that companies that have “become certified” can place on their websites.

The following are essential characteristics of the partner program.

I can’t tell you how many software vendors became partners in part because they thought SAP would bring them deals.

The Importance of Software Vendors Knowing The Limits of Their Knowledge

If you are in senior management at a software vendor, who believed this, you did not have enough exposure to or information about SAP to compete against them. And it’s good to know this to address the issue because addressing the issue has good potential to lead to higher sales.

SAP is a complex beast and cannot be understood with light or occasional exposure. It often surprises me that SAP marketing works not only on customers but also on competing software vendors. They will often assume that many of the fanciful items presented by SAP marketing are, in fact, true.

How SAP Will Deal With its Customers that do Not Comply

If you do not show interest in buying SAP, you will most likely be subject to an audit.

Inappropriate Constructs in IT Decision Making for Companies Using SAP

Every SAP shop in the world is now following a faulty construct. It is a construct somewhat based upon the past, but which was always exaggerated, and it goes something like this.

SAP is a leading software vendor. We rely upon SAP’s new products to improve our IT capability. SAP’s applications are not always the best, but they connect back to the “mothership,” the ERP system. Therefore, whenever possible we will buy SAP.

This construct has been leading to bad IT software decisions at companies using SAP for over twenty years. The downsides of relying upon this construct are about to get worse. Here is why:

Many IT departments place SAP above the interests of the business of the company they work for. This observation has come from many years of interacting with IT departments at companies using SAP. I have presented to numerous IT organizations the problems with various SAP applications that they purchased over the years, and I am invariably told that.

“The thing is Shaun, we are an SAP shop.”

Therefore, SAP customers should be on notice that your IT department will, in most cases, lack sufficient independence from SAP to represent the interest of the company they work for, and by the way, that pays their salary. How this was accomplished, at least the full story, is still a mystery to me.

SAP has passed into a new phase of its existence, and its marketing machine is intense. The term reality distortion field seems appropriate.

The fact remains that outside of SAP ERP, the returns from SAP’s other applications have been extremely weak (something I have covered in my previous articles). Of all software companies, SAP has the most implementations of applications that add little value to their customers. This makes sense as for decades; SAP has had all of the major SIs mindlessly shilling for them. Therefore the SAP “garden” is overgrown with “weeds” and various applications with serious problems. The IT departments in these customers often try to defend these bad applications by pointing out the users’ stupidity or denying the problems.

This information comes from two decades of evaluating SAP installations at many accounts. However, you don’t hear this information because the people now have a financial incentive not to publish this. This is the real story, not the paid-off story offered by SAP consulting companies. These SAP applications are vulnerable, particularly after it can be explained that they have little in the way of a future. You can only promise the future for so long until it eventually arrives. Well, the future is nowhere.

Brightwork Research & Analysis published the first article to call out SAP applications as a legacy. Although if you read SAP Nation by Vinnie Mirchandani, he says essentially the same thing, without using the terminology of “SAP as legacy.” Realistically, there is no likelihood of SAP bringing out future products that do anything special. SAP still has an ERP system. But outside of that, there is not much to be concerned about, in real rather than perceptual terms.

But now, the question turns to what software vendors can do to take advantage of this opportunity.

Note on the SAP xApps Program

In 2010, I called for the SAP xApp program to be terminated as it resulted in a large amount of intellectual property being extracted from software vendors and transferred to SAP. And that companies that were engaging in the xApp partnership were naive to how SAP operated. In my article, I stated it is a program that the US Federal Trade Commission should have reviewed. Larger software companies are not supposed to have a program that promises improved sales that largely never materialize to Hoover up their IP.

I also covered how SAP used a partnership with i2 Technologies to extract intellectual property from them in the 1990s to use as the basis of SAP APO. I covered this story in the early drafts of my book on Discover SAP SCM. This material was censored from the book by the publisher SAP Press, and so it never appeared in the published version. My experience with SAP Press promoted me not to publish books through traditional publishers.

There are no publishers in the SAP space who will publish 100% truthful information on SAP. But unfortunately for me, that is the only information I was or am interested in writing or publishing. Brightwork Research & Analysis Press is my publishing company, where all the books are uncensored.