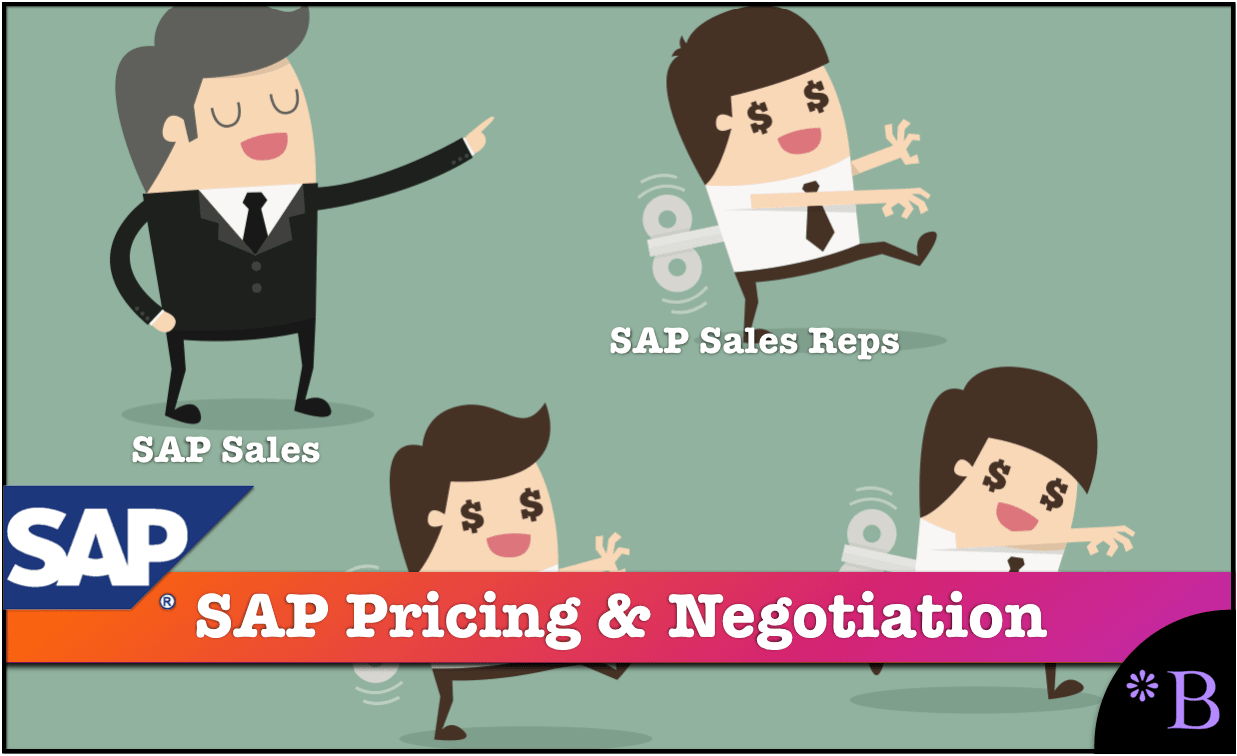 SAP pricing is a mysterious topic that is hidden from public view, making purchasing from SAP a convoluted process. You will learn essential details of how SAP manages pricing that you can use in negotiations with SAP.

SAP follows the on-premises model of keeping its pricing secret. When reviewing SAP’s price list, it states that the price list is public and cannot be published.

Right on the first tab of the SAP price list, it states the following:

“All rights reserved. The contents of this work are confidential and proprietary information of SAP AG. Improper and/or unauthorized reproduction in whole or in part of the information contained in this work is a violation of SAP’s proprietary rights and could cause irreparable damage. No part of this work may be reproduced or copied in whole or in part in any form or by any means (including without limitation graphic, electronic, or mechanical, including photocopying, recording, taping or information storage and retrieval systems) without the prior written permission of the publisher.”

That is false. SAP is selling a public product. Therefore the price and the pricing list cannot be protected in that manner.

The cost of SAP should never be confused with the price of SAP software.

The cost of SAP gets into the topic of TCO or total cost of ownership. When people say the cost of SAP, they don’t necessarily mean the TCO, but they may. TCO means making a model that accounts for the different cost categories. I have written the only book on enterprise software TCO, which can be seen here A Book on How to Best Perform Enterprise Software TCO.

In this book, I break the costs of enterprise software into:

So in this article, we will only be discussing SAP pricing.

The Price of SAP and Pricing SAP

SAP is priced in some different ways, and the price, of course, changes depending upon the specific application, and the number of different ways that SAP can be priced is surprising to most customers.

The different ways the price of SAP or pricing SAP can be arrived at include the following:

Pricing SAP can be determined (before discount) by estimating the number of “things” that the pricing is based upon. And that by itself can be challenging.

The SAP Price List and the SAP Software Cost

The SAP price list is restricted to SAP account executives and salespeople at SAP partners. However, it is a good idea to verify the SAP software cost provided by SAP or an SAP partner with a third party. We repeatedly catch SAP sales providing false information about pricing by serving in this exact capacity for companies. 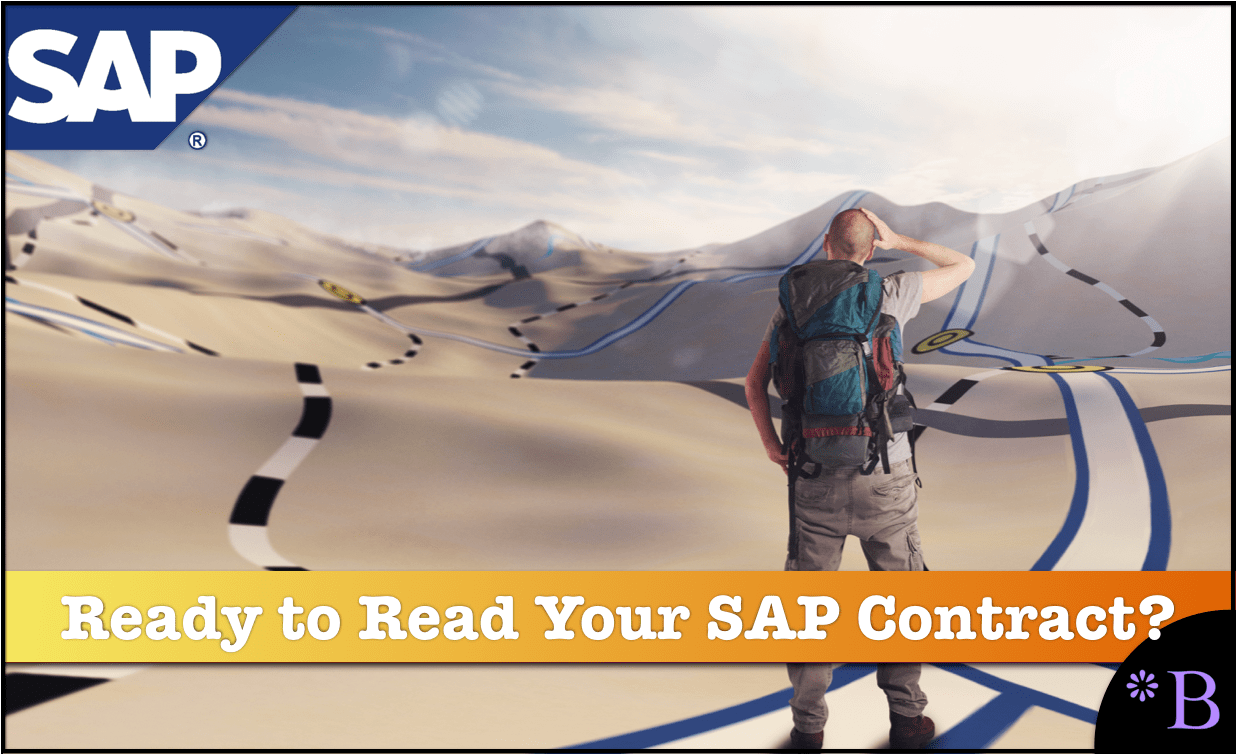 How to Understand The Rising Complexity of SAP Contracts

SAP talks a lot about simplification, but SAP’s contracts are becoming more sophisticated and more limiting regarding what customers can do with SAP’s software. In this article, we will get into this little topic for which there is so little published information.

Example of the Cloud Connector

SAP has the following to say about its Cloud Connector.

An analysis by a commenter stated the following:

It is supported to run S/4 HANA on AWS as IaaS provider, the same for SCP (fka HCP). But it really seems not wanted to use more from AWS than the virtual OS. You even have to solve basics like connectivity yourself when you leave the SAP world. “Must not” – a license restriction?

Once again, SAP restricts the usage of its products to other SAP products. This is done even after SAP proposing that it is in favor of open standards. It should be remembered that middleware companies never limit the usage of their adapters. However, SAP does.

This type of language is littered all through SAP’s contract documentation. It is an orientation to control things, so they maximally benefit SAP. So that SAP controls how the software is used. This is a growing problem and liability with using SAP. Actually, by upgrading to newer versions of SAP, the customer ends up with more restrictions than in older versions, so the restrictions are being ratcheted up.

One thing that SAP does, which seems to be magnanimous, but is actually a trap is to allow customers to trade licenses that they don’t use for licenses of products that they do intend to use. The reason this is a trap is that the primary reason for offering the trading of licenses is to allow sales reps to tell customers:

“Don’t worry about if the product is the best fit because you can always trade the license in the future.”

That is, license trading is a sales technique designed to close a sale when the customer has not performed sufficient research to be able to justify the sale. The issue is that once the license is requested to be traded, SAP controls the terms of the trade. In the case where the license is not yet purchased, the leverage is with the customer, but when the trade-in is requested, the leverage resides with SAP. The second problem is that SAP tries to get customers to trade licenses for things that SAP just happens to want to sell. This means that the license trade often ends up benefiting SAP more than it benefits the customer. We covered this topic in detail in the article How to Trade Unused Licenses S/4HANA and HANA. 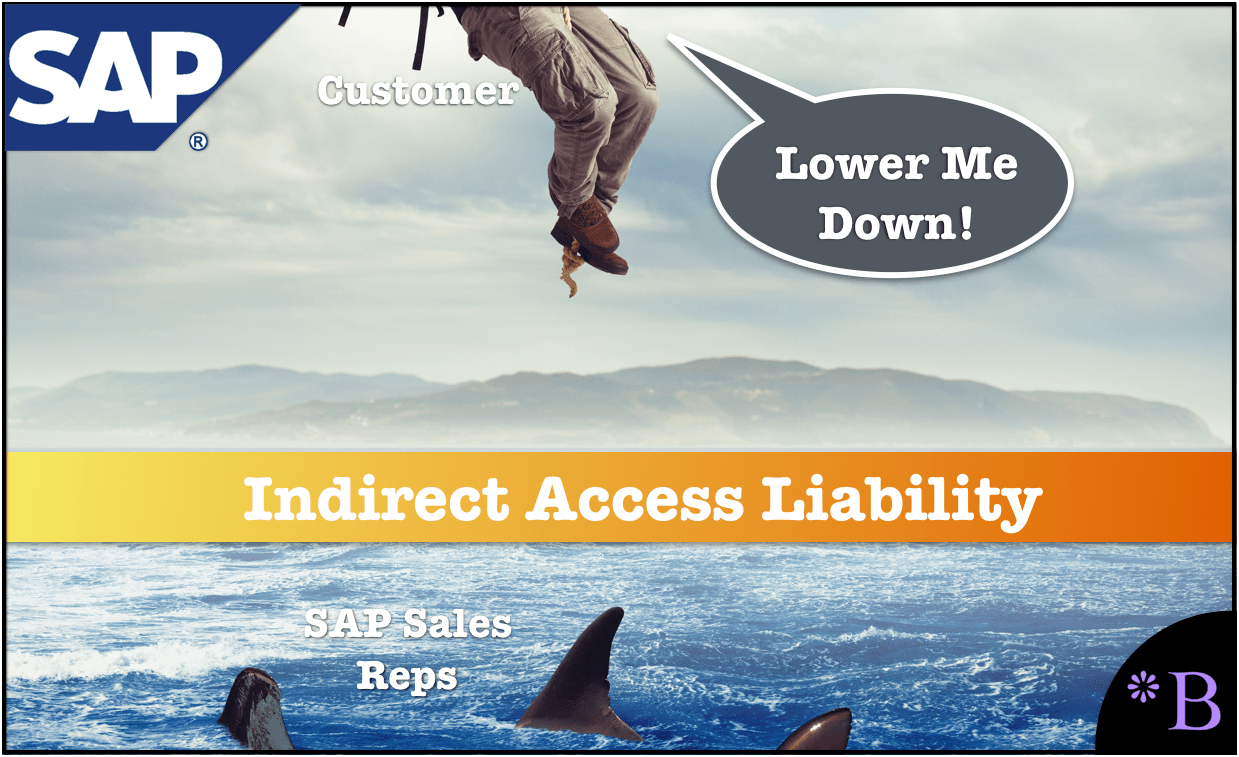 Two vendors stand out from the rest in terms of how, after license purchases, increase liabilities for customers. The first is Oracle, which constantly audits its accounts. The second is SAP that uses indirect access to coerce extra income from licenses. In terms of understanding indirect access, SAP has created its definition of the term indirect access, which we call Type 2, and which is covered in the article SAP and Type One Versus Type Two Indirect Access. SAP claims the right to charge all customers for any non-SAP system that is connected to an SAP system. Media entities like Diginomica and ASUG have normalized indirect access as they are controlled by SAP through financial relationships, but SAP’s indirect access is not based on logic. As a way to set the stage, SAP has created a term called being “underlicensed,” which they use to set the stage and legitimize indirect access claims as we critiqued in the article Are SAP Customers Actually Under Licensed?

A major problem with SAP’s indirect access is it creates a long term liability for SAP customers that SAP can choose to activate at any time, as we covered in the article Dealing with Surprise SAP Indirect Access License Charges.

While SAP license management companies show much more independence from SAP than other entities that provide advice around SAP. It should be noted that licensing management entities are not active in that many dimensions of SAP. They focus on the contract side. While licensing is one dimension where there is more independence, there are far more dimensions that are uncovered by any entity providing independent advice.

And of course, it’s not as if Deloitte. etc. are dying to provide factual information to its clients, but even if they wanted to, they are restricted by the partnership agreement they signed with SAP. 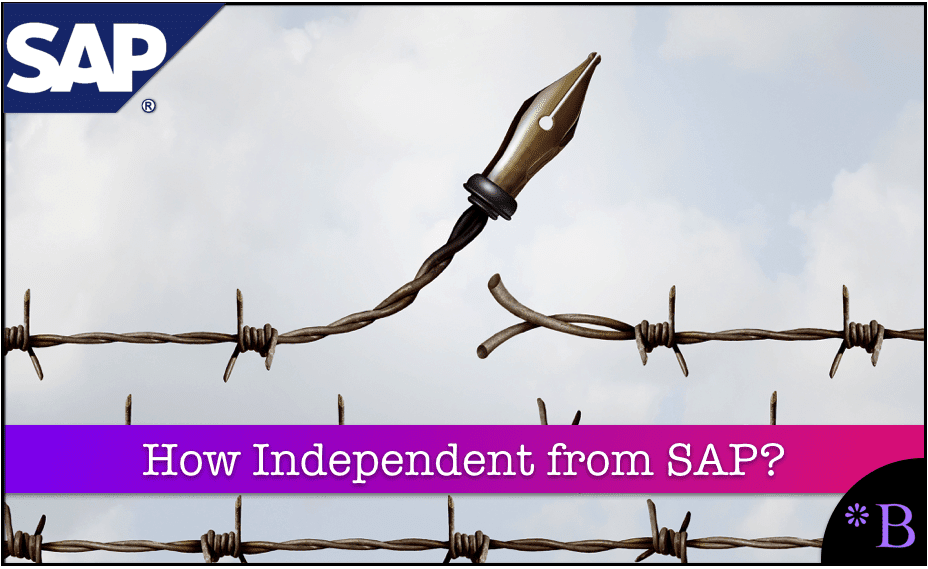 There is one issue within the SAP license management space. So the license management/SAM vendors are partners with SAP. They have to be to get their software work with SAP. That means they have to watch how they step around SAP. If you look at the publishing around indirect access by the SAM vendors, they did not take the position that SAP’s position was untenable and it was cheating the customer, and even illegal. Which we have written is the undeniable conclusion, but that indirect access could be managed with their software.

The licensing consulting companies rely on SAM software, so one could see some “tendrils” of SAP reaching out to the license management companies through the software that the license management companies rely upon. When SAP has a point of leverage, they use it. And their “partnership managers” are I think the best in the business. For those looking for training as “muscle” in enterprise software, the SAP partnership division provides the best training in intimidation tactics.

SAP pricing is quite complex. SAP keeps this pricing complex and opaque, even as they talk about moving to simplified pricing and transparent pricing because it allows them to extract the most money from their customers. 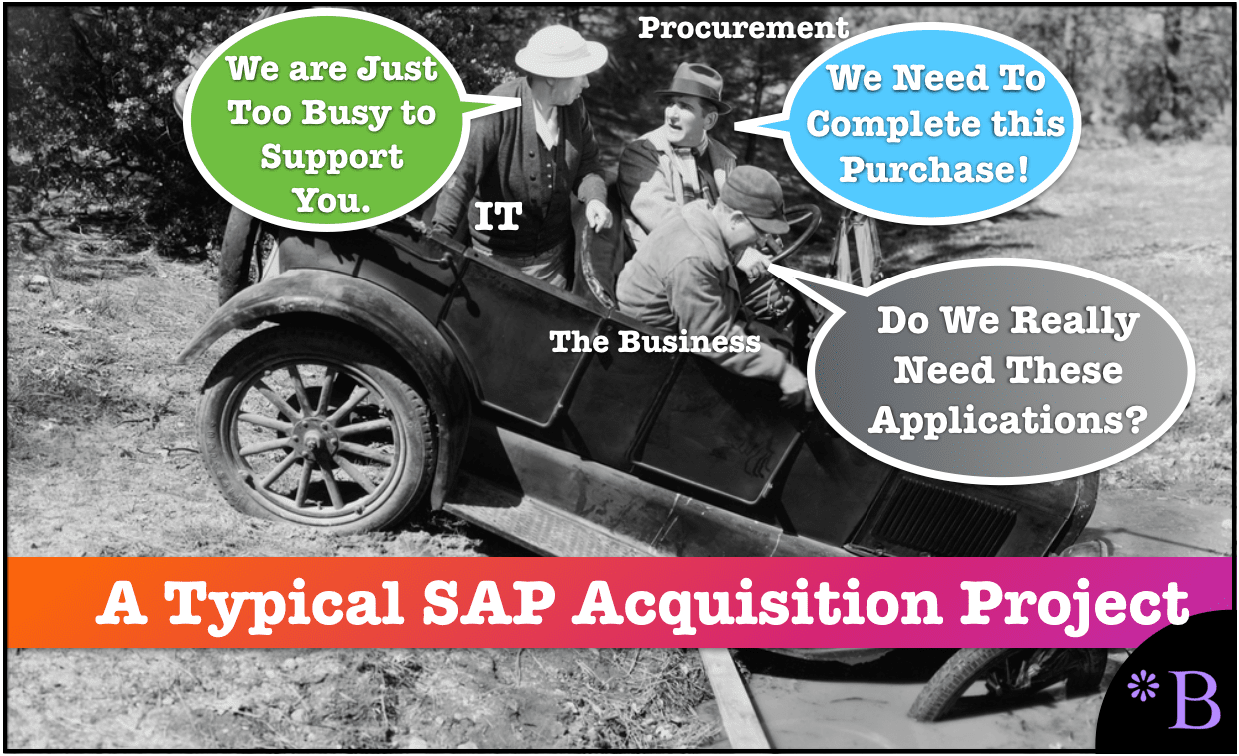 Having supported several SAP pricing negotiations, several items jump out as important to get right. 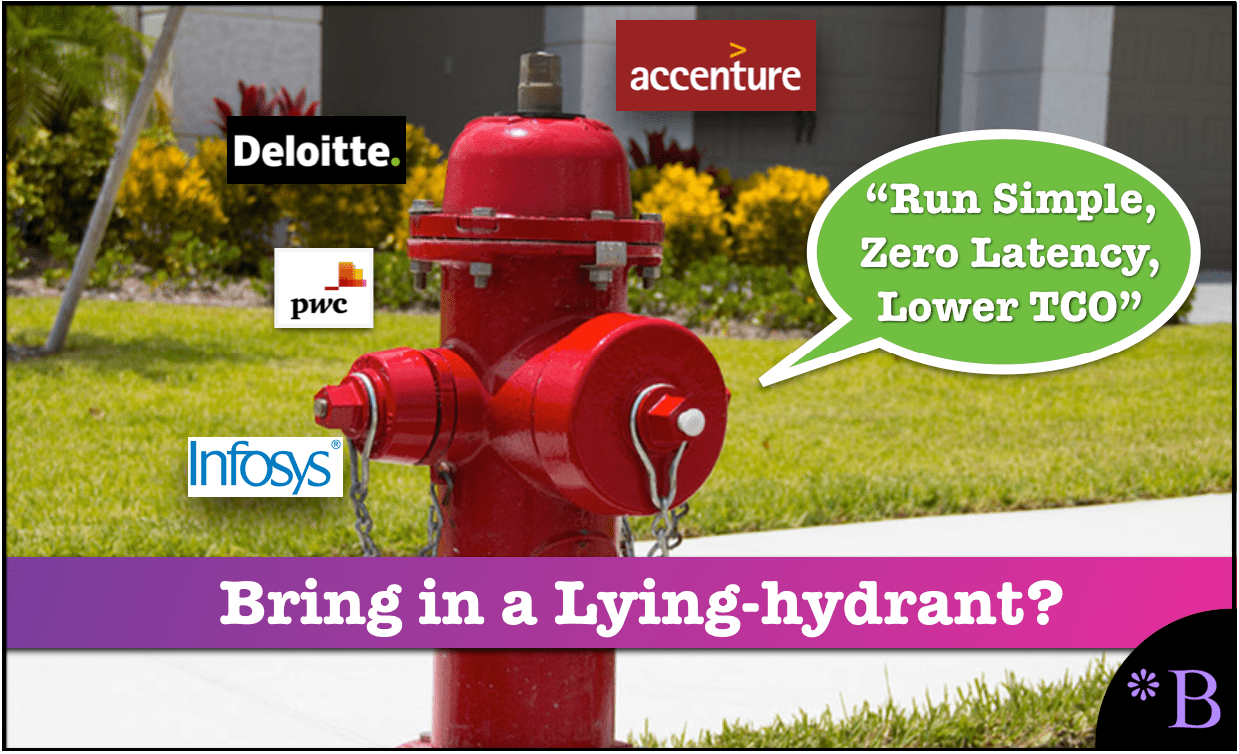 SAP customers that listen to large SAP consulting companies either don’t get how the game is played or have IT departments that entirely in the back pocket of vendors as we covered in the article Where Does The IT Department Owe Allegiance?