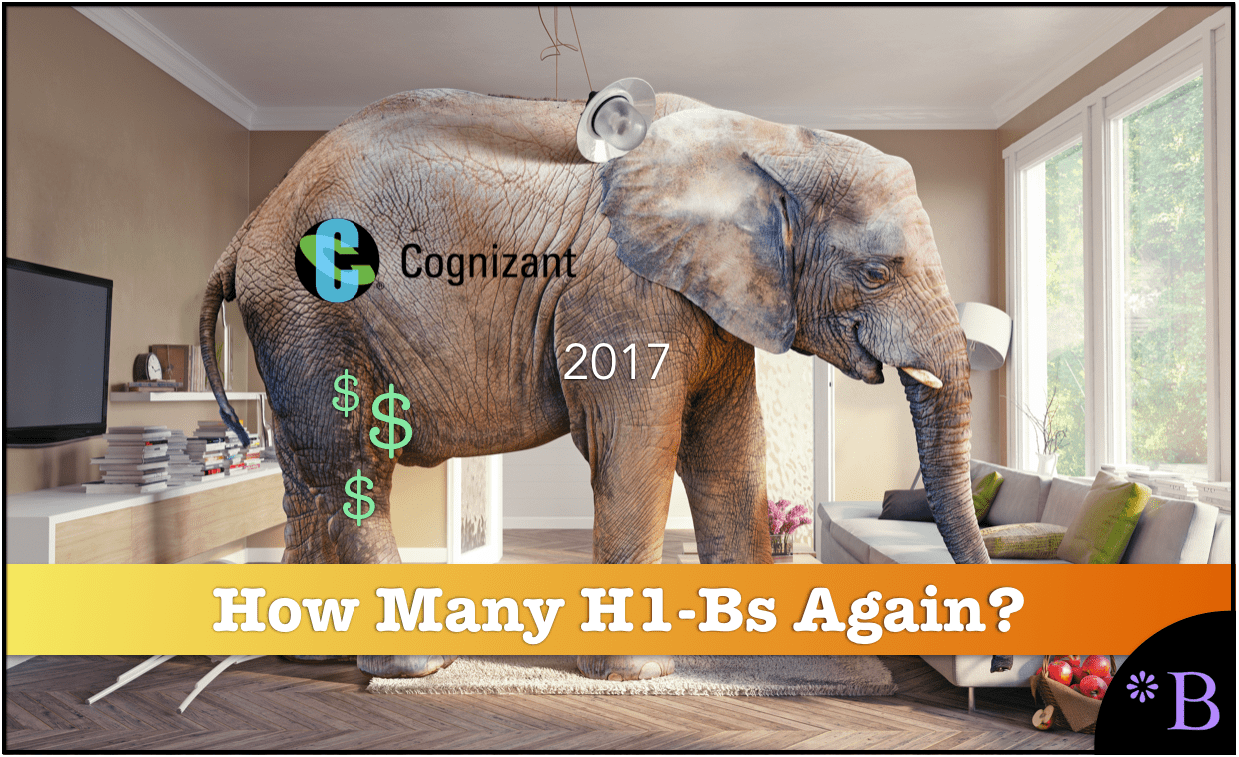 The international media that covers IT and immigration topics have done a terrible job of explaining how much the H1-B program is being taken advantage of by multinationals.

In 2017 Cognizant’s H1-B approvals were ridiculous, and they garnered no media attention. 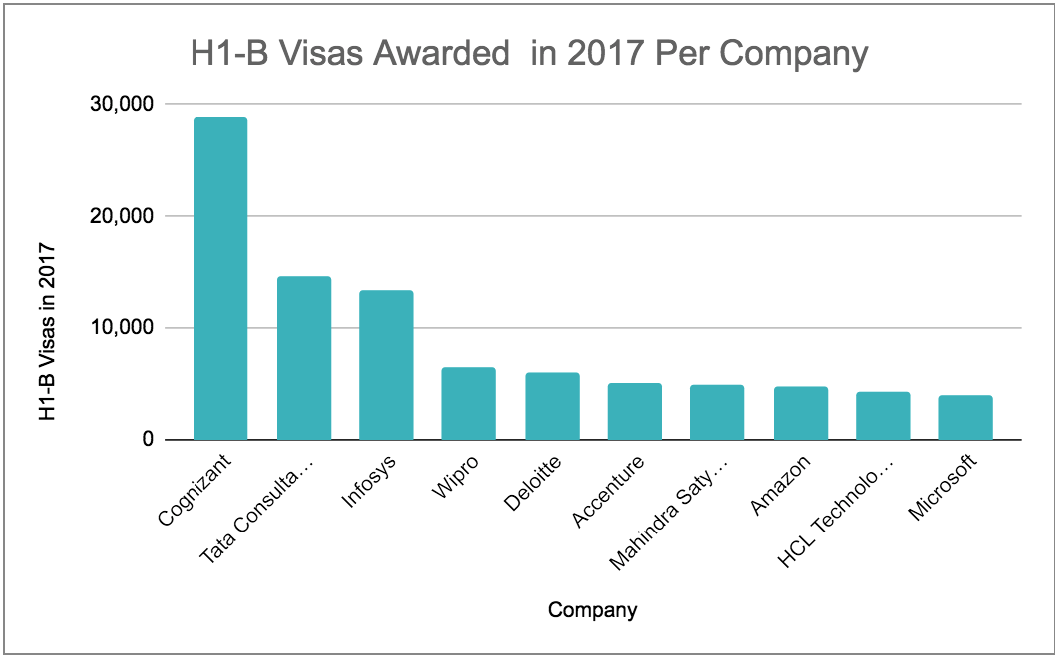 A single company, Cognizant, brought in over 28,908 H1-Bs, nearly all from India in 2017. Is this a program for resources with unique skills, or a mass production system for importing cheap labor into the US?

Blasting the Immigration and Naturalization Service with H1-B Applications

The process to get H1-B applications approved is described as follows:

Immigration officials do not acknowledge the outsourcing firms’ advantage. “The selection process is completely random,” said Shinichi Inouye, a spokesman for United States Citizenship and Immigration Services, the agency in charge of the visa program. “We cannot speculate as to why one company has more petitions selected in the cap.”

For the limited quota of visas, Mr. Négri discovered, the outsourcing companies had submitted far more applications than a small company like BuildZoom could manage or afford — each application costs up to $4,000. – New York Times

How Does Cognizant Say It Uses the H1-B Program?

Several consulting companies said H-1B workers were only a small part of their work force in the United States. Cognizant said in a statement that it regularly recruits experienced American workers and qualified students, and uses H-1B visas only “to supplement our U.S. hiring in order to fill talent gaps in the market.”

At the numbers that Cognizant is bringing in to the US under the H1-B visa program, while no doubt Cognizant hires people in sales and marketing as the English skills of domestic US workers are far superior to H1-B visa holders. It is unlikely that Cognizant is hiring many technical US domestic workers, at least as a percentage. Yet again, every company that files for massive H1-B visas, continually understate their usage of H1-Bs when made to comment publicly.

Here is the original intent of the H1-B program.

In its report on the original bill creating the H1-B visa program, the House Judiciary Committee made clear: “[Immigration policy can fill] the need of American business for highly skilled, specialty-trained personnel to fill increasingly sophisticated jobs for which domestic personnel cannot be found and the need for other workers to meet specific labor shortages.”

The panel also noted: “Employers seeking foreign workers have a special obligation to ensure that obtaining workers from abroad is a last resort.” – Sold Out

If H1-Bs displace US citizens who are already doing their jobs for years, then how can this intent be the current state of the H1-B program?

Using the H1-B For Exactly What it Was Not Intended

It is difficult to accurately interpret how far the H1-B program is from its roots and original intent, but the following quotation explains it well.

One of the earliest government reports on the H1-B program came from the Department of Labor’s Office of Inspector General. The report found that 6 percent of H1-B workers were being contracted out to other employers. The report concluded “In our opinion, the H1-B program was not intended for an employer to establish a business of H1-B aliens to contract out to US employers. That was in 1996. By 2013 the majority of H1-B visas were being used for bodyshopping.” – Sold Out

This disgusting and dishonorable company that does nothing more than serving as a mechanism for displacing US workers also received tax incentives to open its office in Charlotte, NC, as explained in the following quotation.

Professor Ron Hira drew the obvious conclusions: “If I was a North Carolina taxpayer I would be really baffled and shocked that we would be taking our tax dollars and subsidizing a firm that’s actually going to be a net negative for the economy.

Only after being informed by a local news outlet of Cognizant’s primary business agenda did one Democratic lawmaker respond: “I was stunned.” According to WFAE, “nothing in its contract with North Carolina prevents Cognizant from filling the new jobs with more temporary guest workers.” State officials, asleep at the wheel, earmarked $5 million in the name of job creation and economic development to a company infamous for obliterating American jobs. ” – Sold Out

That is right. State government officials knew so little about Cognizant’s business model that they gave $5 million to a company that will displace US workers, particularly right in the state where Cognizant provides “outsourcing” (read US worker displacement services) to the banking sector. North Carolina should get ready to pay out much more unemployment and other social services after Cognizant is finished sucking more jobs out of the state.

The level of abuse of the H1-B program is off the charts and should offend any IT worker or any US worker or US citizen.

The program has become controlled by the significant outsourcing firms and India based companies, that constantly understate how much they rely on the program to compete against firms that do not have the same control and specialization in the H1-B program.

Companies like Cognizant, Tata Consulting Services, Accenture and others are lying to the government when they propose that they must bring in tens of thousands of H1-B visas and that none of these H1-B visa recipients is displacing US workers. The Department of Labor, which is tasked with policing the H1-B program is either brain dead or corrupt if they are approving so many H1-B visas and allowing the entire design of the H1-B program to be rigged for these companies.