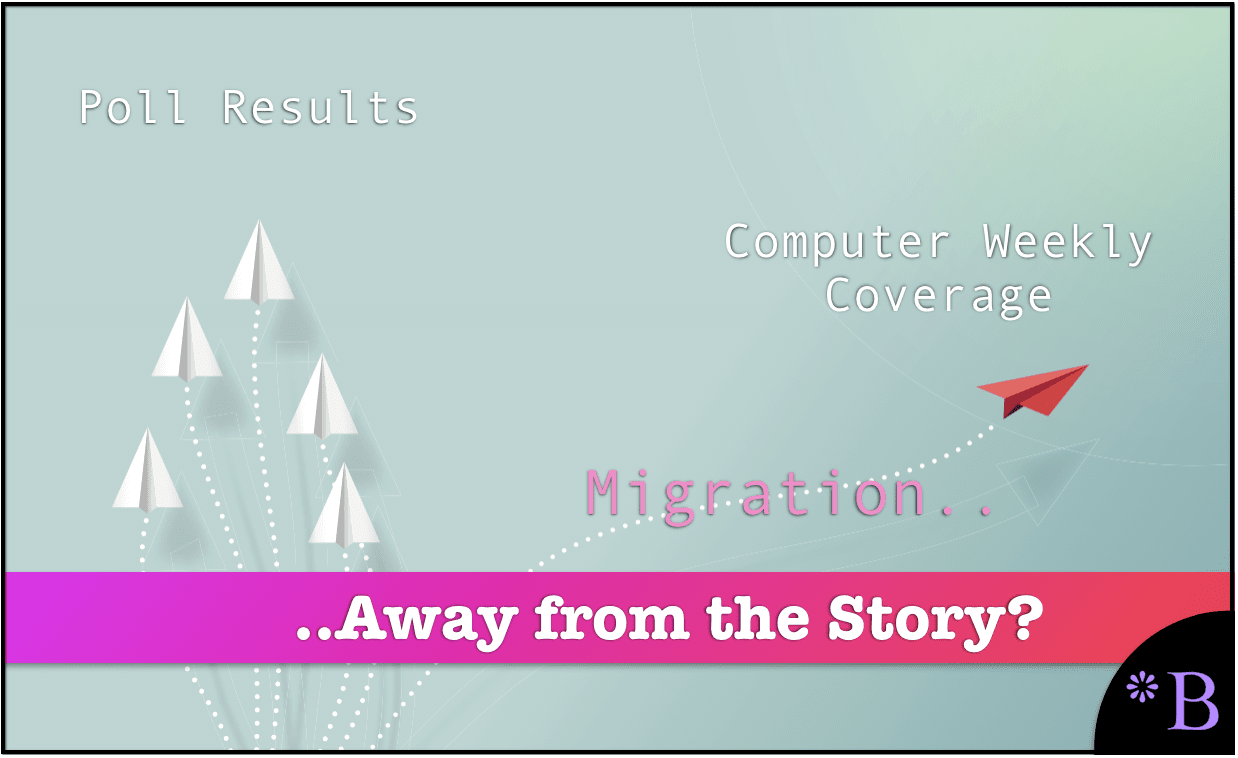 ComputerWeekly covered a poll of data scientists on their plans in the following way.

Research unveiled at the Women in Data (WiD) UK conference in London today shows that most data scientists are ready to move on because of a lack of management support.

This poll has a problem right off of the bat.

The reason is that this poll is being taken by two entities that don’t have a background in research and have a promotional bias in favor of data science. Or, more specifically of companies like IBM or Accenture that are passed contact information from ComputerWeekly’s parent company TechTarget.

Notice that ComputerWeekly never brings up this point, and reports the poll results as if the poll is like a poll taken by Pew Research.

The results show that more than half of the respondents plan to change jobs next year. When asked what is the greatest professional difficulty they face, more than a quarter (29%) cited lack of support from managers and leaders and nearly half (44%) said bureaucracy was a hindrance, while 28% complained of a lack of access to the right tools to carry out data science.

The most important part of the poll is that 1/2 of the respondents, who work in one of the best-paid areas of IT and where many people are trying to break into the profession, want to change jobs.

As for the reasons given, there is an issue with each of these listed items.

Issue #1: A Lack of Management Support

Most people working would like more support from managers. As a longtime consultant, I routinely felt that I could have used more support from management. However, management is perpetually distracted, in too many meetings, and usually lack the understanding and bandwidth to support particular projects with a complicated subject matter. However, I never thought of leaving an area of work because I know that any other area also has similar issues with management support.

Issue #2: Bureaucracy was a Hindrance

This issue is similar to a lack of management support. I don’t know where there data scientists are going to transition to where bureaucracy will not be a hindrance. A lot of what management does in companies is throwing deckchairs at the legs of resources as they are trying to run hurdles.

These complaints are beginning to sound like those that come from people who are new to the workplace. If a poll were taken of nearly any category of job in IT or outside of IT, the bureaucracy would be listed as a major hindrance.

Issue #3: Lack of Access to the Right Tools to Carry Out Data Science

Tools like R, R Studio, and Python, and NLTK are free. The overall field is filled with high-quality tools. Even MATLAB is only $2,350. Data scientists have far more choices of how to do their work than any of the business users in a company because business users have to use software that is selected for them by IT managers who do not know good software from bad and are sheep dogged into ineffective applications by the major consulting companies.

In data science, IT barely understands these tools, and there is not a major industry built up that force-feeds inappropriate solutions down the throats of data scientists. Therefore, while there are some tools that data scientists may not have access to that do cost money, the past few years in data science have been marked by one of the more expensive tools in the market, SAS, losing ground to free languages and tools.

The article could have addressed the topic of why data scientists want to leave such an in-demand field, but instead, the article pivots to the topic of the ever-present skills gap. The skills gap is a long term talking point of companies, that no matter how many skills employees have, there are always some skills they do not possess, and therefore a “gap.” The context of this is that companies now perform very little training, and the skills that companies desire are to arrive immediately out of the hiring pool.

Let us review the quote from the “poll.”

Roisin McCarthy, co-founder of WiD, said in a statement: “We are asking our members, and the wider business community, to help us to demystify perceptions around data science as a way to address the skills gap and appeal to a wider-ranging section of professionals. Data-driven organisations have a massive opportunity to attract and recruit the right talent, growing a data science community that is thriving, challenging and lucrative.”

The poll takers may want to ask the question that if half of the people in the poll want to leave, how much longer will it be growing. But as both WiD (the conference giver) is in the business of promoting data science, a pivot away from what the poll says is apparently necessary.

And this specific topic is then surfaced again in the following quote.

The survey revealed that data scientists are spending an average of two and a half years in a role, but 56% of respondents said they would be seeking a new job in 2020.

A sense of crisis is evident in the research – no internal science communities predominate, and 51% of those of managerial rank said siloed organisations were a barrier to delivering business value.

Now we get a standard quote from managers.

The same managers said skills shortages were a real problem, with 86% saying it was hard to hire data scientist talent, and 69% planning to plug the gaps by upskilling.

So again, why are we back on the topic of the skills shortage?

Is this poll about the skills shortage or about the percentage of respondents, and why they want to leave the field?

Other recent research – by travel booking platform Trainline – found that about 60% of respondents expected more women to move into tech roles in 2020. That research also indicated itchy feet, with 67% of people in tech planning to move jobs next year.

Time to Talk about Women in Data Science? (Pivot #2)

This is now the second pivot in this article. The article jumps to a different poll about women in tech roles and the overall movement of people in tech jobs.

If 67% of people in tech were moving out of their area into a new area, then this would mean that the 1/2 of respondents that plan to leave the data science field is low compared to all of IT, but that is not what this second poll says. It only says 67% of people in tech are “moving jobs,” which could mean a promotion or to a new company, etc..

Apparently, after determining that two pivots are not enough, ComputerWeekly adds a fourth.

Almost 90% of respondents said the purpose of a brand, and the ethics of a company, would factor into where they next chose to work. That sentiment was strong among younger people, with 40% of those aged between 18 and 24 seeking to work for an environmentally friendly brand in their next role.

Now we have moved to a discussion around where data scientists want to work and how age influences that factor. What is going on here with the logic ComputerWeekly?

“Due to the dynamic and growing nature of data science, creating a data science team with the optimum blend of analytic and ‘soft’ business skills is costly and complex. There is a scarcity of resources and a lack of common understanding around existing analytic skillsets and job descriptions.

“As more organisations embrace data-driven transformation, there has never been a more urgent need to upskill and resource data science teams across a wide range of sectors and departments. Data science should be considered a team sport, with the combined skills of each member contributing to success.

“If organisations cannot hire people with all the skills required, I would urge them to look at what skills are in existence internally and create a team of people with complementary skillsets. That way, as a collective team, firms can create a solid foundation for driving data-driven transformation.”

This is a flexi quote. It can be used again, but with just a find and replace for the term “data science” with really any other expertise. Marketing, professional sports, running an amusement park, you name it, and this quote is ready for repurposing.

Watch as I do exactly this.

“Due to the dynamic and growing nature of marketing, creating a marketing team with the optimum blend of analytic and ‘soft’ business skills is costly and complex. There is a scarcity of resources and a lack of common understanding around existing analytic skillsets and job descriptions.

“As more organisations embrace data-driven transformation, there has never been a more urgent need to upskill and resource marketing teams across a wide range of sectors and departments. Marketing should be considered a team sport, with the combined skills of each member contributing to success.

“If organisations cannot hire people with all the skills required, I would urge them to look at what skills are in existence internally and create a team of people with complementary skillsets. That way, as a collective team, firms can create a solid foundation for driving data-driven transformation.”

There we go. See, it works the same for different expertise, and it is impossible to tell the has been word replacement.

ComputerWeekly does not know how to conduct a poll, nor do they care. ComputerWeekly, which is owned by TechTarget that specializes in sharing contact information with “partners” as we cover in the article How Computer Weekly is a Front for Marketing Automation writes articles for one purpose, and one purpose alone — to collect and pass on contact information to vendors and consulting firms. ComputerWeekly/TechTarget has a significant conflict in conducting an honest poll due to its financial entanglements. Every part of the poll is designed to take the company’s site or position on the topic of data science. This is why a number of pivots were used in the article. Once the topic veered to close to an uncomfortable truth, a pivot was used to move to a different topic.