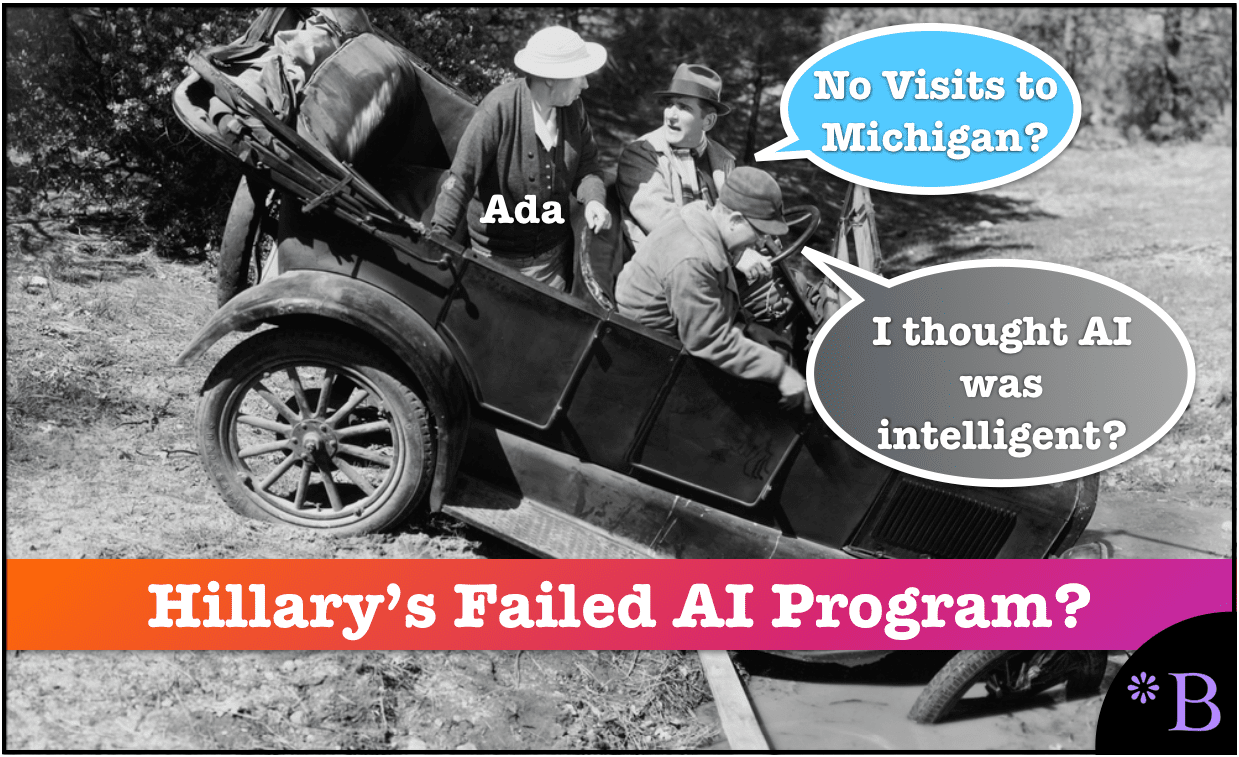 We are bombarded with marketing information about the opportunities for AI and Big Data. Nearly every IT consulting company and many significant vendors have some AI stories they are currently pitching to help “crush” their quota.

All of this marketing promotion and complicit IT media coverage on AI has made the information generally published on AI extremely one-sided. And when AI projects fail, they are very quickly swept under the rug.

This article will focus on one such story, one of the most critical developments in the US, at least in the past ten years, where AI played a decisive and decisively negative role.

The book The AI Delusion is focused on the overall overestimation of AI and not the Hillary Clinton campaign per se. However, it has some fascinating insights regarding how the campaign was run and how it over-relied on a software program.

On September 16, 2016, seven weeks before the election, Eric Siegel wrote an article in Scientific American titled “How Hillary’s Campaign is (Almost Certainly) Using Big Data.” He argued that, “The evidence suggests her campaign is using a highly targeted technique that worked for Obama.” Ada ran 400,000 simulations a day prediction election outcomes for scenarios that it considered plausible. For example, 70% of the campaign budget went for television ads, and Ada determined virtually every dollar spent on these ads. The advice of experienced media advisors was neither sought nor heeded. Ada’s database contained detailed socioeconomic information on which people watched which television shows in which cities and Ada estimated how likely they were to vote for Clinton. No one really knew exactly how Ada made her decisions, but they did know that she was a powerful computer program analyzing an unimaginable amount of data. So they trusted her. She was like an omniscient goddess. Don’t ask questions, just listen. – The AI Delusion

Right off of the bat, the number of simulations run per day should have been considered suspicious. There is a general misunderstanding that AI runs itself. AI systems do not work without human intervention. There is a category of AI or machine learning (which is the less marketing and more accurate term) that is called unsupervised learning, but again, after some time, the results must be analyzed by a human. When I have run “machine learning” algorithms, I have commented to people I was working with at the time, how little the machine was learning, and how much work I had to do.

The entire topic of 400,000 simulations per day should have been reviewed to determine what this meant or if it was merely a way to impress the recipients of the message.

We do not know how Ada determined what she considered to be an optimal strategy, but it is clear that, based on historical data, Ada took blue collar voters for granted, figuring they they reliably voted Democratic, most recently for Obama, and the would do so again. With blue collar voters as her unshakeable base, Clinton would coast to victory by ensuring that minorities and liberal elites turned out to vote for her. This presumption was exacerbated by Ada’s decison that the campaign did not need to spend money polling in safe states –so, the campaign did not realize that some safe states were no longer safe until it was too late. – The AI Delusion

Oddly, Ada believed that Hillary Clinton could not lose blue-collar voters. She would seldom talk about labor or issues of workers in general. This is for the following somewhat obvious reasons.

The Jimmy Dore show provides many analytical videos around politics and political media. Jimmy Dore describes himself as a “C student who spent his life in comedy clubs.” However, he predicted the problem with Hillary as a candidate before the election occurring. Why was Ada not fed the very available statistics that Jimmy Dore describes in this video?

Ada did not see these stats — which opens up a far-reaching question as to what overall data was being used. The Democratic National Committee also did not see this (that is, the real subject matter experts).

No One Could Have Predicted Hillary’s Electability Problems?

When Clinton suffered a shock defeat to Sanders in the Michigan primary, it was obvious to people with campaign experience that his populist message had tremendous appeal, and that the blue collar vote could not be taken for granded. Ada didn’t notice. Clinton blamed her shock loss on everything but Ada. Ada was, after all, a powerful computer — free of human biases, churning through gigabytes of data, and producing an unimaginable 400,000 simulations a day. So, the campaign kept to its data driven playbook, largely ignoring the pleas of seasoned political experts and campaign workers who were on the ground talking to real voters.

Most glaringly, the Clinton campaign’s data wonks shut out Bill Clinton, perhaps the best campaigner ay of us have ever seen. Bill was outraged that Hillary did nto listen to him during the campaign– literally refusing to take his phone calls. He complained to Hillary’s campaign chairman, John Podesta that “Those snotty nosed kids over there are blowing this thing because no one is listening to me.”

Ada concluded that voters were more worried about Trump’s unpresidental behavior than they were about jobs; so Hillary focused her campaign on anti-Trump messages: “Hey, I may not be perfect, but Trump is worse.”

Following Ada’s advice, the Clinton campaign almost completely ignored Michigan and Wisconsin, even though her primary-campaign losses to Bernie Sanders in both states should have been a fire alarm of a wake up call. Instead, Clinton wasted time and resources campaigning in Arizona — states she probably could not win (and did not win) becuase Ada decided that Clinton could secure a landslide victory win wins in marginally important states. – The AI Delusion

What Information Was Fed to Ada?

It is a bit surreal to hear that individual states were barely visited by Hillary Clinton when one considers how easy these states are to visit.

Did Ada know how easy it would have been to visit these states? Each action takes effort and resources. Was Ada fed the relative effort for each action when it performed its simulations? This again brings up the questions of what was going on with Ada.

The Problem with the Term AI

The problem with stating that something is “AI” is that it does not describe precisely what is being done. AI is not just a self-guiding robot that is all-knowing.

This brings up the question if one AI system contradicts another AI system, then what happens? And if two AI systems can contradict each other, then what is AI? These are the questions that should have been asked. AI is not a place where questioning should stop. It is a place where questioning should begin. AI is quite dangerous is that it can easily fall into the same fallacy of the omniscient deity, that the deity has all the answers, and that the deity should not be questioned. This is precisely the thinking that science spent the last several hundred years trying to dismantle.

Consulting firms, most likely just like the group of people used by the Hillary Clinton campaign, are using the term AI to bill hours and gain power by tricking non-technical people with they can build systems that allow humans not to think.

Losing to the B Team

In the various post mortems of the Hillary Clinton campaign, one of the questions that have been asked is how such a sophisticated team such as the one fielded by Hillary Clinton lose to what is generally acknowledged as an inexperienced team in the Trump camp. It seems that Ada, in part, neutralized the team that Hillary Clinton had assembled. Ada blocked out Bill Clinton’s advice and the advice of other experienced staff.

Consultants that lie about AI are enabled in their lies by the fact that the IT media is compensated to promote AI. Major firms like IBM and Accenture have no demonstrated ability to implement AI projects, spend big money to get AI promoted in the IT media. Therefore, IT media is delighted to promote AI without ever looking at the evidence. As we covered in the article How Awful Was the Coverage of the McDonald’s AI Acquisition?, much of the AI coverage appears to be written by authors who have never used AI/ML themselves and who don’t know what it is. They are not questioning the statements made about AI by those trying to sell AI software and AI consulting. Therefore the promotional AI quotes, which are most often false, are being repeated without a filter.

If Ada had been a success, its success would likely have been published. But as it was not only a failure but a miserable failure, it took years for this story to come out.

It is curious that while AI is being lauded, the most fundamental part of the scientific approach (which is that you are honest in observing the data points) is being discarded to promote AI.