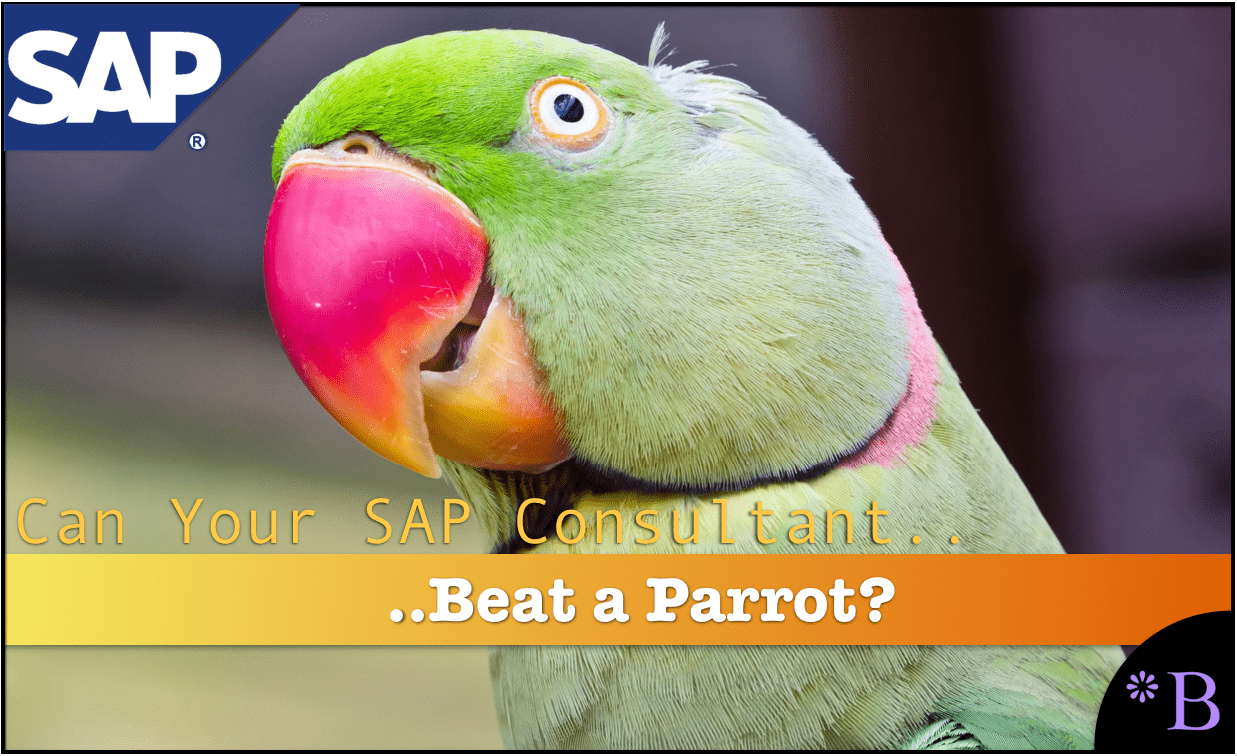 In previous articles at Brightwork, we have covered the issue of HANA marketing on the part of SAP consulting companies. In our research, we have found that the major SAP implementation consulting companies repeated everything SAP said on HANA. However, as covered in the article How SAP Changed Strategy on Oracle and HANA, almost all of these statements regarding HANA have been proven over time to be incorrect. This has brought up the topic among SAP customers about the value-add of overusing large SAP consulting companies over merely using a parrot. You will learn how an SAP consultant compares to a parrot.

There is a great preference for humans to overestimate their cognitive ability and value-add versus the animal kingdom’s rest. There are, however, many areas where animals far exceed the abilities of humans. For example, a squirrel can remember where it has stored hundreds of nuts, while many humans frequently lose their house keys. The Monarch butterfly migrates from Mexico to Canada over four generations (butterflies do not live long). However, without GPS, most HANA consultants would not find their client’s office locations.

When one comes to the parrot and other speaking birds, their abilities are quite impressive. The budgerigar has a 2000 word vocabulary, far enough to cover the entire lexicon of HANA. One of the best known of these is Disco, who was profiled on the BBC.

A major reason for using parrots instead of consultants from the large SAP consulting companies is, of course, the lower price. Parrots will work…literally for bird feed or chicken feed as it were.

The test we performed was to see how a parrot would compare against what was true about HANA. To accomplish this test, we purchased a male budgerigar parrot that was named Blue Baby.

Blue Baby weighed 1.4 ounces when purchased and had not been trained before we bought him from Stan’s PetWorld in Sebastopol, CA. Blue Baby was trained for two hours per day for two weeks in preparation for this study.

Blue Baby was in good health and trained it to repeat the essential SAP talking points, just as the large consulting companies do with their consultants. He was able to pick up the SAP catchphrases on HANA very quickly.

Here were the results.

Secondly, due to HANA’s immaturity, lack of backward compatibility between HANA 1 and HANA 2, and a host of other factors, SAP customers who use HANA have experienced increased complexity rather than decreased complexity.

Actual results from HANA projects show that HANA reduces the data footprint by 40% and 70%. Much of this depends upon how much effort and time is spent in archiving. But archiving can be performed with or without HANA, so including archival as footprint reduction due to HANA’s column-oriented design is misleading. Secondly, the database’s size is not an issue unless all of the tables must be put into memory and if the database is sized per GB. Unfortunately, HANA has both of these disadvantages.

Unfortunately, HANA has both of these disadvantages.

“HANA allows either OLTP or OLAP from a single platform!”

Blue Baby liked to say this catchphrase and would say it loudly and frequently, often disrupting the staff in our office. We did encourage Blue Baby to be enthusiastic, but the volume on this sentence meant that we had to sometimes put a blanket over Blue Baby’s cage. This can work for SAP salespeople and SAP consulting company resources that get a bit too enthusiastic (thinking about the bonus or the billing hours), but putting blankets on top of people is considered unprofessional. Instead, we recommend directly sending them out to Starbucks when they get too worked up about their catchphrases.

The only other problem with this catchphrase is that this statement is also false. HANA is optimized for analytics and cannot switch between these two modes as DB2 and Oracle 12c. This shows HANA’s performance, which is covered in the article What is HANA’s Actual Performance?

But even beyond this, it is not clear that performing both from a single database is particularly necessary. This increasingly seems more of a marketing ploy on the part of SAP.

Blue Baby was able to repeat these and many other HANA catchphrases with remarkable fidelity. While the SAP HANA consultants in our study would often move words around in the sentence, Blue Baby reproduced the SAP talking points with far higher repeatability and with less variance from utterance to utterance. This means virtually no movement of words or propositions along with the catchphrase.

Criticisms of the Research

Since we published this research in Nature Magazine, there have been some surprising and strong criticisms of our work. The largest criticism is that our test parrot does not know what it is saying. That is when Blue Baby says…

It has no idea what it is saying and is merely “parroting” the talking points back to the listener. And while we would like to disagree, it is true. Most research into parrots indicates that parrots do not understand abstract concepts. Parrots primarily evolved the ability to vocalize to identify themselves and to mimic to fit into other groups of birds. They did not evolve to explain concepts related to information systems.

This is explained in the following quote.

Birds seem more likely to respond to calls that are familiar to their own, and they ostracize individuals that don’t speak their language, so to speak. This may allow them to keep untrustworthy newcomers from joining their clan. – Heath and Science

However, we think this criticism is unfair because many consultants and senior members of SAP consulting organizations don’t know anything about databases and are, therefore, really just doing the same thing that Blue Baby is doing. Furthermore, Blue Baby demonstrated a higher accuracy level as SAP consultants in HANA at the major consulting companies. Parrots have all kinds of benefits that are not realized in addition to their lower cost.

Our Proposal for Parrot Usage

Our proposal is more modest. We do not propose that parrots and SAP consultants are the same on SAP HANA. No. But Parrots have all kinds of benefits that are not realized in addition to their lower cost.

These include the following:

For this reason, it is long past due for parrots to be considered as a lower cost alternative to SAP HANA advisors in companies.

No parrots were injured as part of this study in their use as substitutes for consultants from large SAP consulting companies.