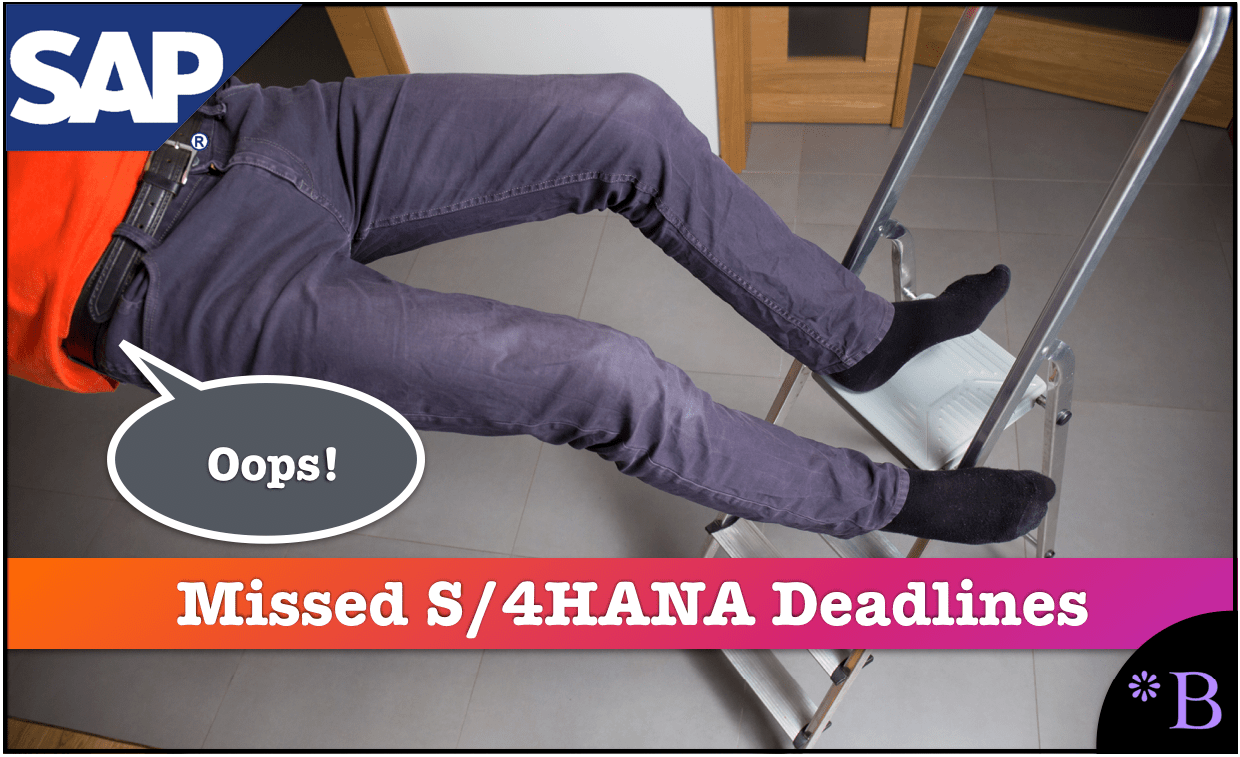 Video Introduction: The Evidence That The S/4HANA Suite Missed Its Release Deadlines

During the review process for the S/4HANA implementation research, the topic was brought up that if SAP did not have precise dates on releasing the overall EM suite, how can it be proposed that S/4HANA missed its deadlines. We show clear evidence of S/4HANA not being complete significantly after SAP stated that it would be complete. As time has progressed, SAP has released more items that illustrate that S/4HANA was introduced far too early, something inconsistent with its messaging in 2014. You will see how SAP missed its deadlines and how IT media never covered the issue.

Here is a published roadmap from SAP on S/4HANA from the publication SAP S/4HANA Enterprise Management Introduction and Innovations for extended Supply Chain.

In this slide from SAP, it shows Simple Finance (now Finance) was to be released in 2014, but that deadline appears to have slipped and Finance was released and generally discussed in February 2015. The official release date is a bit hazy. The is a SAP article on SAP’s site (which I have footnoted) that show S/4HANA was released in early February. There is an article about S/4HANA being “launched” in June 2014 at SAPPHIRE, but that is not necessarily the same thing as being released. Most likely, that was a convenient time to give people an advanced view of S/4HANA. Indeed, in 2014 there would have been almost no S/4HANA Finance implementations.

However, in this slide, SAP is predicting S/4HANA as a suite will be released in 2015. The plan was always to introduce the Finance module first, and for the rest of the suite to follow shortly after. This is the message that was delivered to account after account, telling customers that they should jump on Finance, and by the time they had implemented Finance, the entire suite would be ready to implement. It is now 1/3 of the way through 2017, and S/4HANA is still not a complete product.

This is the message delivered to the account after account, telling customers that they should jump on Finance, and by the time they had implemented Finance, the entire suite would be ready to implement. It is now 1/3 of the way through 2017, and S/4HANA is still not a complete product.

The question here is how great is SAP’s forecast inaccuracy?

How different was what occurred from what SAP said would happen?

Well, if S/4HANA was to be introduced in 2015, and S/4HANA is still not complete two years later, then we can’t say by how large of a margin SAP missed its deadlines.

It can only be said when S/4HANA as a suite is complete. SAP is misleading customers by stating that S/4HANA is becoming incrementally more complete with each release, but obviously, that makes no sense. Completion is when the functionality within each of the modules is complete. It is quite possible that SAP could have completed another module of S/4HANA by now, or in the past, if it had applied its development resources to just that module. However, SAP has chosen to develop all the modules incrementally.

Furthermore, it must be considered that SAP never stated that S/4HANA would be developed incrementally (as S/4HANA is currently being developed). Now, we are awash in things like Simplification Lists and various versions of S/4HANA that are gradually developed versions of S/4HANA. But that was not SAP’s messaging in 2014. SAP proposed that the new ERP system would be introduced in two phases. Finance in 2014 (in a complete form) and then the rest of the suite in 2015 in a complete form.

In April of 2016, Dennis Howlett of Diginomica has the following to say about the state of S/4HANA.

“The free S/4 HANA trials are available, I’ve tried some of the cloud modules but if I’m candid, they’re a tad anemic and barely qualify as modern. I poked around in the financials and the marketing module the last day or so and found that while holding promise, SAP hasn’t taken advantage of modern idioms to present a truly compelling offering. Asking me to select a company by its number and not its name for instance seems arcane. Asking me to name product segments with underscores between names is geeky and requires extra thinking.

Taken together, S/4 HANA must be viewed as a work in progress. On the upcoming earnings call, I am hoping that SAP will provide some clarity around S/4 HANA beyond the customer counts.”

This was interesting, because according to Dennis Howlett, even in April 2016, S/4HANA does not appear to be a complete product. And Dennis Howlett’s Diginomic counted SAP as a sponsor at this time. However, SAP initially communicated a release in 2014 (the month unspecified), but the proposal here by Dennis Howlett is that over two years later, S/4HANA Finance is still not complete.

The Fact of the Matter with S/4HANA Finance Customers

The fact is that companies that implemented S/4HANA Finance do not have a complete ERP suite to connect. That is a new development in the history of SAP’s ERP system. For a number of the companies on the S/4HANA list of implementations, the public case studies, these companies are only financing entities, and therefore they do not need the rest of the ERP suite. But for customers that intended to connect to the rest of the ERP suite, one has to wonder what their state of mind is now that they have invested in S/4HANA Finance.

The Media Coverage of the Missed Deadlines

This topic would seem to be a pertinent fact that would be reported by media entities that cover IT. However, I cannot find anyone covering this topic. Media entities like ComputerWeekly will report when SAP produces a press release and also takes advertising from SAP. But in terms of checking whether previous statements/predictions came true, there is no coverage of the topic. A media entity in the IT space cannot expect to receive advertising if they spend time verifying vendor and consulting company statements.

This specific topic was covered in more detail in IT Media Output and the Fake News Debate.