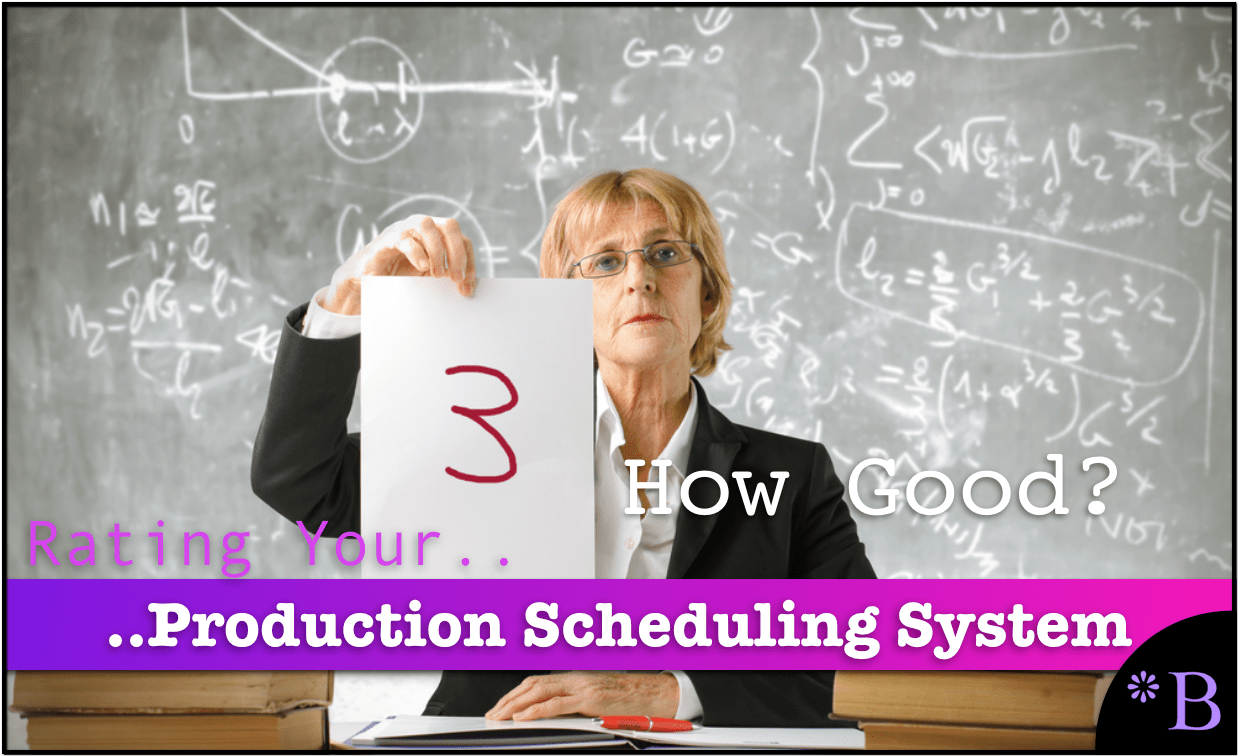 And really, why write about production scheduling software when you can write about next-level analytics or CRM systems that will explode the pipeline! If you are an analyst firm, you need to keep your eye on marketability and write on hot topics.

It all reminds me of a quotation from the movie 13 Days,  where the actor playing Adalei Stephenson (The US  Ambassador to the UN) has to bring up an unpopular topic related to trading US missiles in Turkey for Russian missiles in Cuba. To introduce the subject, he states to JFK and his group of advisors:

“Maybe someone in this room should be a coward, so I guess I will be.”

I suppose in that vein, someone has to risk talking about unsexy software categories, so it might as well be me.

However, before we get into the details, let us cover what I mean by a “system,” so we can all be on the same page on terminology. So since I am talking about explicitly grading a system, what is meant by this term?

Production Scheduling Software is whatever logic makes the production and scheduling process go.

I am using the term Production Scheduling Software very generally to refer to the software that supports the production scheduling process. This is whatever is used.

There can be some confusion here because spreadsheets can have sophisticated optimizer add-ins, which can be used to develop custom solutions (Excel come with an optimizer, but you can buy much better and more powerful optimizers to be used with Excel). However, in most cases, this not what companies use, so this is not what I mean when I refer to spreadsheet scheduling in this article.

Whatever is employed by a company for production scheduling, then it is, by my definition, the Production Scheduling Software that is to be graded.

Is ERP + a Spreadsheet Your Production Scheduling Software?

In this previous article titled Why Do Companies Continue to Use ERP/MRP Systems for Production Scheduling?, I explained the reason so many companies score poorly in their production scheduling is due to the fact they use a combination of ERP and spreadsheets as their “system.” This is a significant error in understanding of what production scheduling requires (in most instances)

That Wasn’t Supposed to Happen!

It turns out that companies often start off thinking they can use ERP systems because of the combined fact that they were initially told they could, and secondly because at many companies production scheduling efficiency is not a high priority (see above statements regarding the relatively low profile of this software category.)

Once the combination of ERP + spreadsheet it used, inertia sets in, and there can often be a reticence to move to something more appropriate and more capable like full production scheduling software.

It’s hard to pinpoint all the reasons for this, as they shift depending upon the company in question, but a few things can be said. I have seen and others who I have spoken to have seen a general underestimation of how difficult it is to schedule most production environments with essential tools effectively.

I have an appreciation for this because I have tried scheduling production scheduling environments myself, using the same tools that were in use by my clients. I did very poorly.

Secondly, another big part of the problem is due to the illusion that the ERP system is adding much more to the process than it actually is. Let us get into this topic briefly, because it’s foundational to understanding how so many companies ended up with the production scheduling systems that they have today.

One System to Rule Them All?

ERP is simply an extensive footprint application that provides many functionality areas under one “roof.” It always needs other systems to do work in specific areas. Spreadsheets and customization are performed when the ERP system cannot meet the business requirements. It is still amusing to hear that an ERP system can meet some requirements as long as there can be some customization. If customization is written, then the application is not meeting the requirement, and one is at that point on par with using an external application. This apparent mind trick has worked on many people over the years.

Companies that sold this vision of exclusively using the ERP system had to back so far off of this concept that the modern interpretation and usage of ERP systems is unrecognizable from the original presentation of ERP. I extensively researched this topic and have a book on it called The Real Story Behind ERP, but the short version of the short, a lot of people who made predictions about ERP owe ERP buyers a big apology.

Since ERP systems were first introduced and up until the present time, most ERP vendors have proposed that ERP (and the MRP method contained within) was a satisfactory approach for performing production planning and scheduling. The only ERP vendors, who currently do not propose this, are the ERP vendors that also happen to have production planning/scheduling applications to sell — and they only started saying this after they added this category of application to their portfolio. Until that time, they said ERP could do production scheduling.

I can say quite confidently that except in rare circumstances, which I will describe further on, ERP (often with help from Excel) for production scheduling is not a satisfactory approach. Instead it is merely what evolved – or was a fall back after the promises made by ERP vendors regarding their ability to support production were found not to be accurate.

MRP is a method of both supply and production planning. MRP and similar methods only produce a plan, which allocates a planned production order to a day. Through using some capacity restricted (and there are several ways of doing this), then the job is to present a production plan to a production schedule that is roughly feasible (that means achievable by the plant every week).

However, everything after this point is where the production planning process stops. We now move into production scheduling. This distinction is a critical part of any executive decision-maker to understand.

The Next Layer Down

So, MRP takes the original view or demand/requirements and capacity and then create the plan. Next, it requires help from another grouping of logic to schedule the production. One important thing to consider is that MRP is not exclusively focused on manufacturing. Yes, that is right as another big part of MRP is procurement — either for the product to be used for resale, or to support production.

In fact, and this is the part that many people that make decisions critical to this area may not know, MRP only deals with manufacturing at an abstract level — that is when to schedule production orders and purchase orders. This has several important implications for any “system” that is used to perform production scheduling. This system should have the following:

Now up to this point, I have described MRP as a process that is put in front of the detailed scheduling process. And that is true, but it is not exclusively right. This is because some of the production scheduling applications can also run MRP so that the procurement/material implications can be seen within the application, which is far more detailed and useful (for this purpose) than any ERP system.

In this case, the application will tend to run MRP quite frequently when the MRP/ERP system is integrated correctly into the detailed scheduling system to the production schedule. The changes to the production schedule are then fed back to the MRP/ERP system, which then makes adjustments — although the modifications are at a higher level of aggregation.

There is a powerful tendency to oversimplify and to unify manufacturing environments conceptually. For whatever reason, when many people think of manufacturing, they think of a discrete production line. However, there is so much variety in manufacturing. This is cheese being mixed. Mixing operations are their specific type of scheduling problem (and they can be simple or complex).

This is an oil refinery. The production scheduling is so specific for the petrochemical industry that it is mostly dominated by a single software vendor that only focuses on developing solutions for this industry.

And considering the variety of manufacturing environments, it gets to the next topic of this article, which is the all-important matching process between system selection/development and the specific requirements.

How Does Your Production Scheduling System Match The Production Requirements?

There is a crucial matching process that must be performed first to connect the right type of solution to the needs, and one of the critical distinctions is based upon the complexity of the scheduling problem, which I break into low complexity, medium complexity, and complex or custom.

Knowing Where You Are on the Production Scheduling Decision Tree

I recently had a consultant reach out to me regarding the benefits of using a production scheduling system in a chaotic environment. At the end of one of his correspondences, he asked.

(In this case) Is there really a benefit to using production-scheduling application?

This consultant started by asking me if I could recommend a packaged production scheduling application.

What Node of the Decision Tree Again?

The questions that he was asking had multiple facets to them, and in fact, his company was, in my opinion, further “up” the decision tree — which from what I could see is at the “first node.”

The following seems to apply to the first node of decision making.

This is about moving backward from the requirements of the best approach first, then worrying about the second node after the first node is determined. The decision branch currently is what application or what solver or what lightweight application or what type of custom solution.

So I think because of the specific types of requirements that he had with his client that it is essential not to move down to the second decision branch yet, and to stay up at the first node until this first question had been answered.

Due to actions primarily on the part of Marketing and Sales, production scheduling is increasingly chaotic. It is always amusing to hear about “demand shaping,” where Marketing and Sales adjust the incentives to smooth demand. Where is this happening outside of discussions at conferences? Just the opposite is now the most common approach. I will get into this in detail a future article. Still, pandemonium is the new normal in manufacturing, and this entire topic is far less acknowledged than it really should be.

So the question is if your company was evaluated, how well do you think they would do in how “good” the production scheduling system is?

I hope this article has at least demonstrated that it is important enough to find out the answers to these questions.

This article does not mean that I propose just any production scheduling solution.