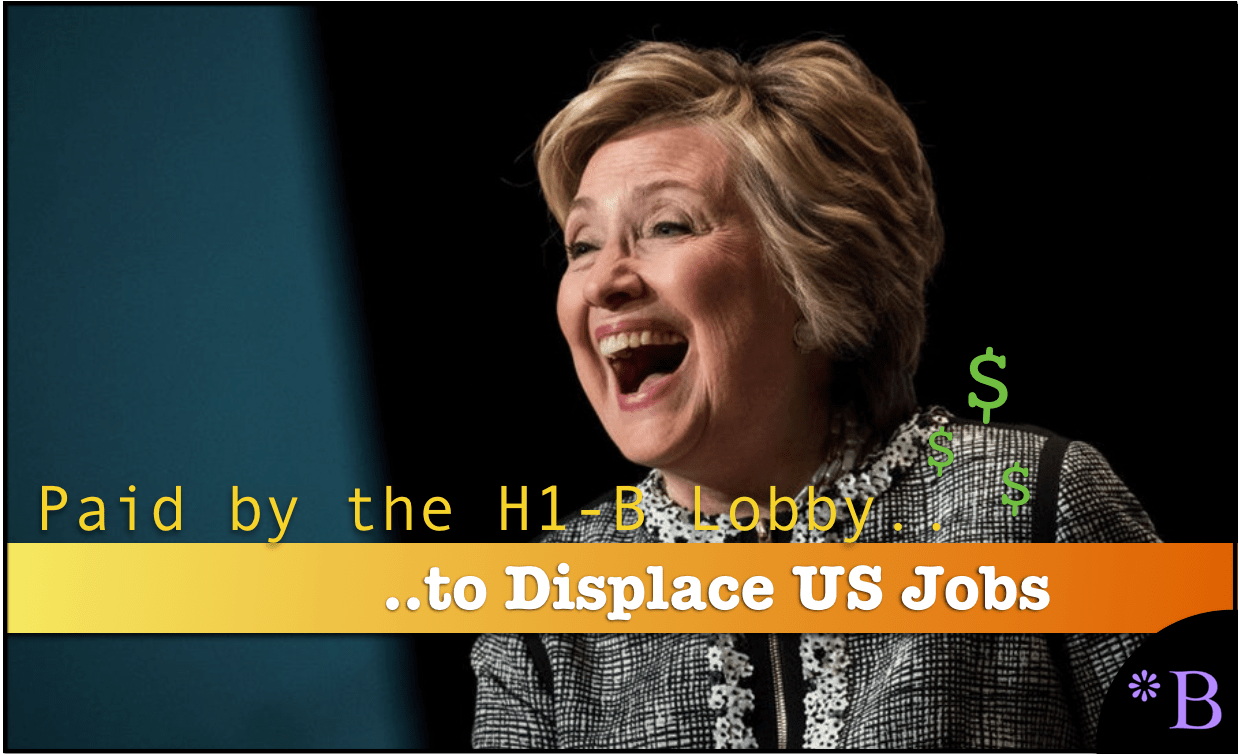 Hillary Clinton was a robust anti-US worker politician, who was in the pocket of Big Tech.

The Democrats’ 2016 frontrunner campaigned in Silicon Valley on a pledge to increase H1-Bs during her failed 2008 presidential bid. She devoted considerable time and energy to promoting offshore outsourcing during her Senate tenure.

In 2003, then Sen Clinton celebrated the arrival of Indian outsourcer Tata Consulting Services to upstate New York, where the company’s research deal with the University of Buffalo yielded a measly ten US jobs. During that time period, Indian outsourcers petitioned to import more than sixteen hundred temporary guest workers to the Empire State under H1-B. Tata called the arrangement Hillary’s “brainchild” Two years later, she traveled to India, where she touted the economic benefits of offshore giant Tata, endorsed “more such partnerships,”

President Clinton racked up three hundred thousand dollars in speaking fees from Cisco — an aggressive outsourcer that laid off thousands of American workers. – Sold Out

Hillary’s “Interesting” View on Who Voted for Trump

When According to Hillary Clinton, is it Acceptable for US Workers to Be Angry About H1-B Displacement from Their Jobs?

Did that jealous American lose their job to an Indian based upon real credentials? Because Indians are well known to fake credentials. How about US citizens that are displaced by companies like Infosys or Tata that run outsourcing operations and specifically target US workers? Or what about the fact that the vast majority of H1-B workers are not highly skilled as we cover in the article How the Pay Level of H1-B Visa Workers Contradicts Industry’s High Skills Argument. Is it, according to Hillary Clinton, acceptable for US workers to be bitter about this? Or are they also “the deplorables?”

“Racists, sexists, homophobic, xenophobic, Islamaphobic,”…you know bad people. Not good upstanding people who sit on various corporate boards because of family relations. These deplorables are “irredeemable” and also (unfortunately) not on Infosys’ or Tata’s payroll.

At the end of this video, Hillary talks about “empathizing with these people.” However, having their jobs outsourced — which is Hillary’s policy, is not a very good way to do this.

We have many questions for Hillary.

At one point in the video, Hillary declares that these irredeemable (who live in red states) don’t represent the real America, which is odd, because this is virtually the same argument, only in reverse made by Sarah Palin. In Sarah Palin’s worldview, “real Americans” lived in rural small towns, while no or lesser Americans lived on the coasts and voted Democrat. 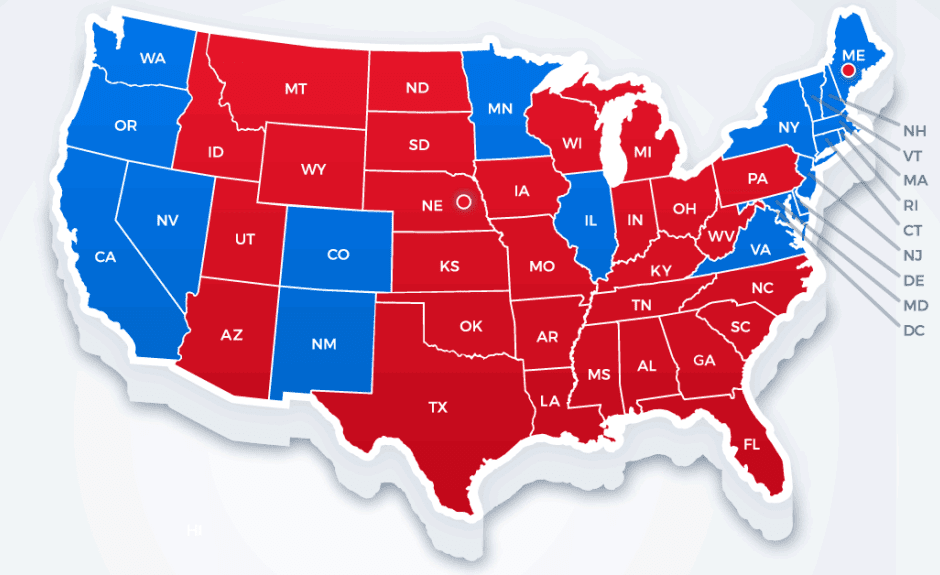 There is a clear demarcation between the Red (Republican states) and the Blue (Democrat) states in the US, with the blue states being mostly on the coasts and the red states mainly in the middle. According to both Hillary Clinton and Sarah Palin, the bad people, and less American people live in the states that don’t vote for their party. (image from CFain Institute)

Hillary’s explanation (in the first video) of why she lost the election has no evidence to support anything that she says.

She was in bed with the H1-B lobby, and therefore, takes the H1-B lobby’s viewpoints. However, she presents this financial bias as is if it some progressive through on her part. If she loses an election, it is because of racists and sexists, not because her policies of her husband and her were terrible for US workers.

If US workers don’t appreciate being screwed by Indian firms and American firms that engage in H1-B fraud and discriminated against in their own country, it is because they are also racist. (The term racism seems to now be a defense used by any individual who happens not to be white). And according to Hillary, diversity equals innovation, which is odd. When did white societies suddenly develop a problem with innovation?

Hillary presents her view in India about what amounts to..

“Hillbilly whites who are jealous of Indians”

..without telling the audience that she is knee-deep in Big Tech money generally and Indians outsourced money specifically.

She also neatly divides the country into backward and white areas (that of course voted for Trump) and those enlightened individuals — who are of course diverse and dynamic (that naturally voted for her). These “backward areas” also include former stable manufacturing states like Michigan and Wisconsin that had their manufacturing hollowed out by her husband’s disastrous NAFTA program and manufacturing being moved to China.

If only those states were more “diverse” and less racist and sexist, they would have voted for Hillary, who would have then supported hollowing out white-collar technical jobs the same way her husband did for blue-collar manufacturing jobs. What a bonus!

Hillary, like Bill Clinton and Barack Obama, is a “New Democrats.” 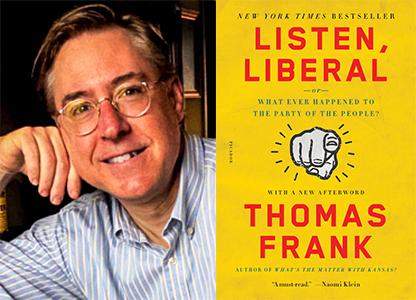 The book Listen Liberal explains how the New Democrats have turned their back on workers, who used to be the backbone of the Democratic party, and have sidled up to big-money donors. Because the Democrats have nothing to offer ordinary people in terms of their policy, they differentiate themselves from discussing identity politics.

The New Democrats that now run the DNC (and are the polar opposite of Bernie Sanders) detest working people and prefer the company if big tech and labor exploiters and H1-b fraudsters like Infosys or Tata, but also US companies like Cisco and Google, that are significant funders of enlarging foreign worker visa programs as we cover in the article Why Are 47 Entities Lobbying in Favor of the H.R.1044 IT Immigration Bill?

An alternate explanation is that the Democrats had nothing to offer most working people. At least Trump bothered to lie to them and tell him that he wanted to help workers. Trump himself brought in low-cost foreign workers for his golf courses because he found US wages to be oppressive — and naturally, all of his Trump products are made in third world nations.

Hillary is very much a supporter of merit-based employment. See the hard work and 100% honest income made by her daughter. Chelsea earned every penny of her $ 9 million compensation, as did Joe Biden’s son. And anyone who thinks that these two people did not earn their positions on the boards of various corrupt entities clearly has a jealousy problem.

Jobs for Displaced US Workers on Corporate Boards?

All that is necessary is for Hillary to get jobs like she did for Chelsea for displaced US workers who she enabled through her pro-Indian and anti-US worker legislation. Jobs sitting on boards are available for those with limited experience (with Chelsea beginning her board sitting career at only thirty years old.)