The first thing to note about the ASUG poll is that ASUG provided no numbers about who took the survey. Nothing. No numbers about how many participants there were, industry the customers were from, nothing.

But something else to mention is that ASUG has no independence from SAP. Therefore they are an entirely non-credible source of information on SAP, and we find falsehoods presented by ASUG in their publications as an ordinary course of reading ASUG material. ASUG’s content is mostly copied and pasted directly from SAP marketing literature.

These graphics are the only real detail from the poll. We will highlight some of the curious observations listed in these graphics.

In June of 2016, Nucleus Research published a very different type of result from polling SAP customers. 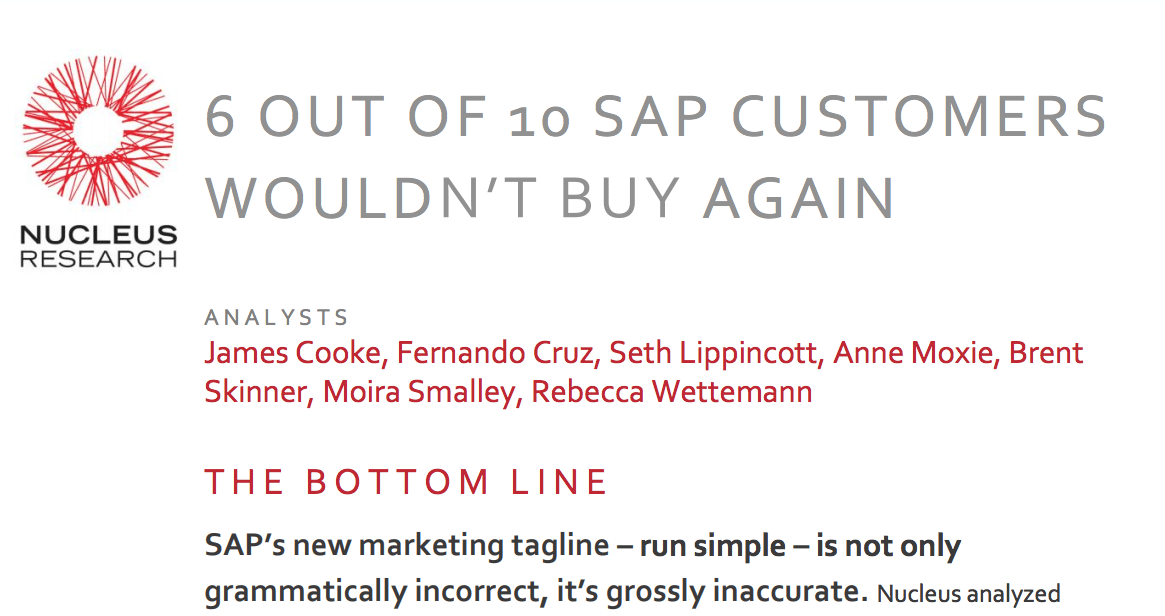 But again, ASUG exists primarily to promote SAP. Therefore they are required to report that the vast majority of customers see SAP as central to their innovation.

Business Self Identify as Innovators?

Being an innovator has a positive connotation. This does not prove that the respondents are innovators, only that they think they are.

Who is Moving to S/4HAAN and When? 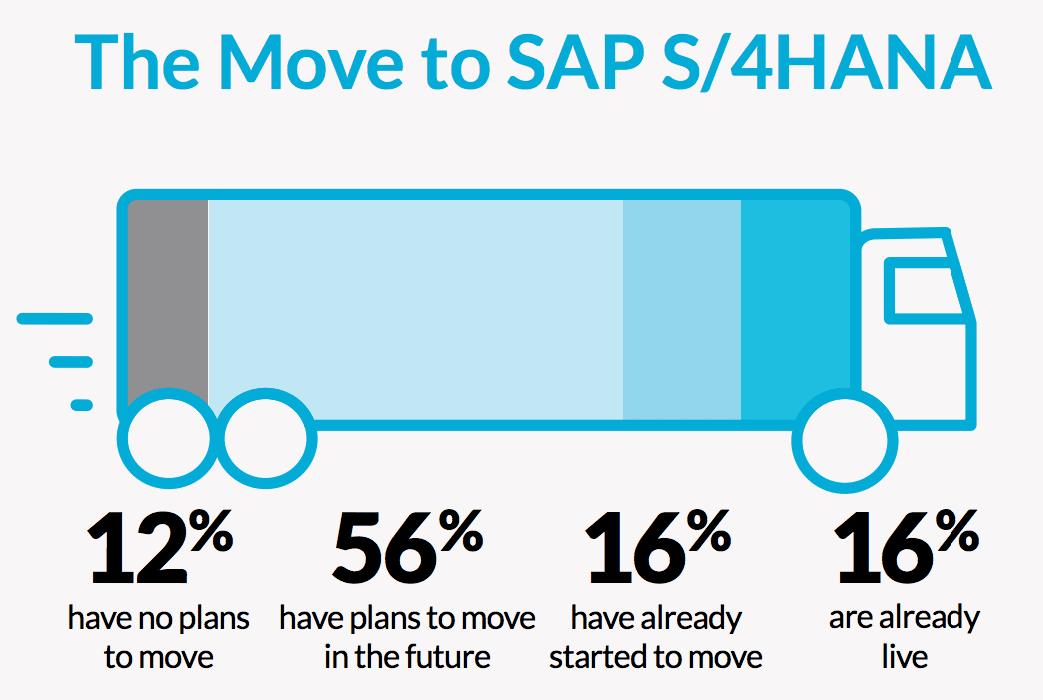 This is a problematic reporting of the percentages that fall into each category. If we look at just the percent of customers already live, which is reported as 16%, multiply this by the number of ERP customers. First, let us review the estimate of the SAP ERP customers.

SAP has the following ERP systems.

ECC and R/3 customers are natural candidates for S/4HANA. Although, interestingly, most of SAP’s ERP customers are still using R/3 and not ECC. This is made even more interesting by observing that ECC was introduced in 2016. This means that most of the SAP customers on R/3 did not migrate to ECC.

*The raw data for this table was provided by HG Insights. Something to observe is that there are not truly reliable sources for the number of customers actively using the various SAP products. We cover this topic in the article Does SAP EWM Have Close to 2,000 Live Customers?

To arrive at an estimate for the potential installed base ERP customers that are the potential overall market for S/4HANA, we used the following logic.

This is how we arrived at we arrived 40,591 potential S/4HANA customer conversions from the current installed base. The poll is of current SAP customers, so we did not estimate net new SAP customers.

If we apply the 16% provide by ASUG by 40,591, we arrive at 6,495 customers already live on S/4HANA. However, as recently as a month ago at SAPPHIRE, Hasso Plattner estimated only 3,500, which, according to our study, is hugely exaggerated.

This means that ASUG’s poll shows more than 1.85x or almost 2x the number of live instances of S/4HANA of even the rosiest projections. It also proposes that another 6,495 (roughly) S/4HANA projects are currently being implemented. If this were true, this would be an enormous number of S/4HANA consulting jobs and job listings (that we do not observe) and an overall “buzz” around the S/4HANA application. It would also mean many tickets being opened on S/4HANA topics.

This brings up a question about the representativeness of the poll group or the sample to the population. But ASUG has no adherence to any research rules. They don’t even report any of the details around the underlying information. Polling has to attempt to represent the population, or the poll is worse than useless.

When ASUG reports these numbers and is repeated through various media and consulting channels, these numbers will be quoted without observing that…