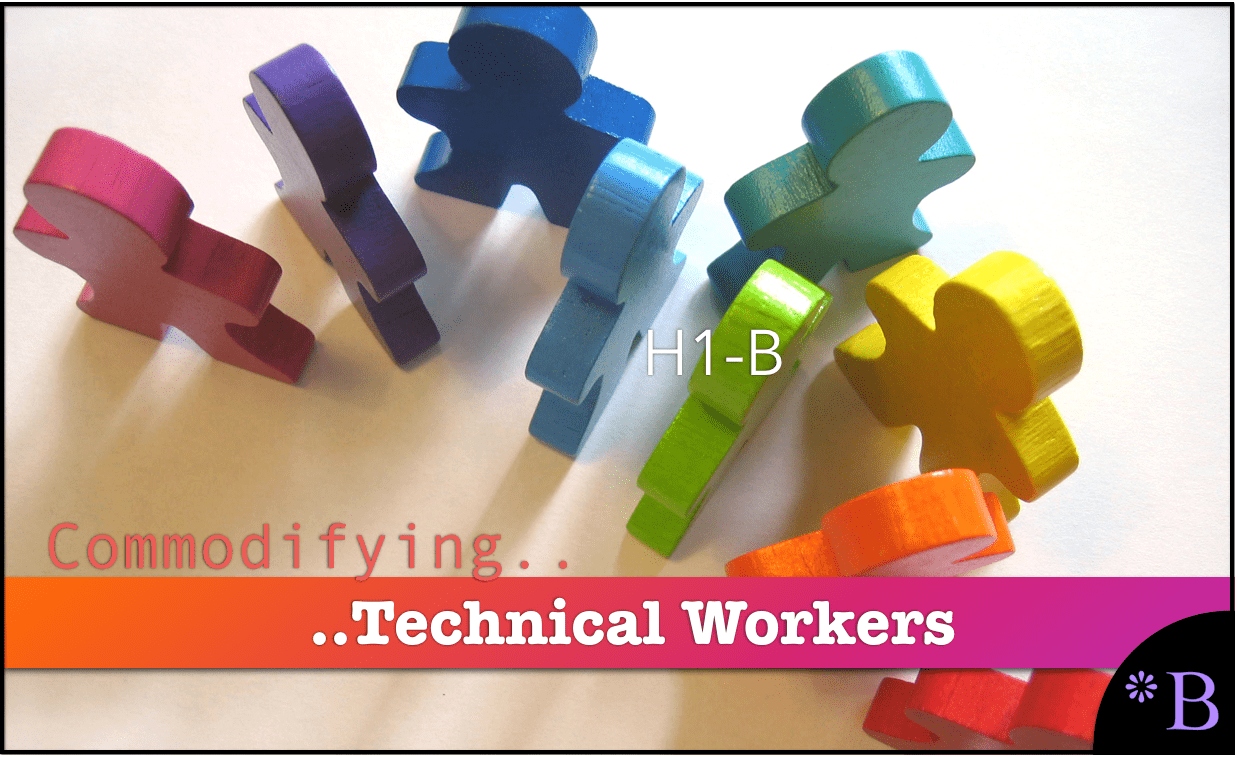 Before the H1-B program, the US had one of the best markets for technical skills. This was instrumental in allowing the US to become the world leading in computer hardware and software. The system provided an incentive to acquire technical knowledge by having a market that compensated those that had the aptitude and the willingness to put in the effort to master technical topics.

The Effect of H1-B

Every year the H1-B visa program, along with a number of other foreign worker visas such as the L-1, B-1, and others, along with enormous fraud in each of the visa programs, has served to undermine the investment that US citizens put into developing their technical knowledge as workers, primarily from India have flooded the US market. This has had deleterious effects on STEM fields as we cover in the article How The H1-Bs Are Pushing Out Domestic US Workers of IT and STEM.

This is also explained in the following quotation.

“From almost the day I was hired, I saw that most of Wilco’s employees were non-immigrant guest workers on a bouquet of temporary visas including H1, L1, J1, F1, and even visitors and training visas,” she reported, “I witnessed firsthand the degradation of the workforce, foreign and domestic, enable by these unregulated visa programs.” – Sold Out

Our research indicates that the US is in a full-scale change to its technical market and that it is moving to a situation where there is an overabundance of technical immigrants from India which will lead to the domestic population moving out of technical skills — for reasons both related to the lower pay in technical subjects as well as the discrimination enforced by Indians and Indian firms (see the article The Amazing Fact That 99.7% of Tata Consulting is Indian), and the fact that Indian workers make for hostile work environments for non-Indians.

These changes commodify technical labor, and they also move more of the income from technical work away from those that do the work to corrupt middlemen.

In India, there is no level of labor exploitation that is considered to be excessive. Bonded labor, slavery, companies that do not pay employees are common throughout India. Inhumane treatment in India for workers is commonplace.

Workers making clothes that end up in the stores of the biggest names on the British high street have testified to a shocking regime of abuse, threats and poverty pay. Many workers in Indian factories earn so little that an entire month’s wages would not buy a single item they produce.

Physical and verbal abuse is rife, while female workers who fail to meet impossible targets say they are berated, called “dogs and donkeys”, and told to “go and die”. Many workers who toil long hours in an attempt to support their families on poverty wages claim they are cheated out of their dues by their employers.

akamma, a 42-year-old mother-of-two working for Gap supplier Texport in Bengaluru, told the tribunal she earned just 22p an hour and that when she finished at the factory she had to work as a domestic help to top up her wages.

“It hurts us to be paid so little. I have to do this and they sell one piece of clothing for more than I get paid in a month,” she said. “We cannot eat nutritious food. We don’t have a good life, we live in pain for the rest of our life and die in pain. – The Guardian

In a high-profile case last July, a 26-year-old domestic worker from Bangladesh lodged a compliant with Indian police saying she had been beaten up and held captive by her employers at a home located in the upscale gated community of Noida, a suburb of New Delhi.

Her employers accused her of theft, but it was later discovered that she had not been paid for two months. The case is indicative of a larger trend of domestic workers in India being mistreated.

She was freed after friends and family gathered in protest outside the apartment complex where she was being held.

There are widespread reports of domestic workers in India being underpaid, overworked and abused by their employers. Incidents range from withholding of wages to starvation, not allowing time for sleep or rest, and beatings, torture, and sexual abuse. – DW

By law, he says, masks and safety equipment should be provided to all workers. Children should not work until they are 16.

There have been cases of them falling asleep through exhaustion and suffocating in the piles of raw cotton.

From the ginning factories, the cotton is spun into thread from which textiles are made.

It is at this stage that the supply chain becomes a completely different world.

Mandhana Industries in Tarapur, two hours from Mumbai, is a supplier to many European brands.

Its plant is clean and modern, with an abundance of posters promoting good working practices. Staff wear protective masks and clothing.

“We have a social programme,” says Mandhana president Ajay Prakash Bhatnagar. “We have doctors and health care. We take care of everything.

“I think this is why we get so many repeat orders again and again. Our customers are happy with the way we operate.”

Labor exploitation is not occasional in India. It is the norm. And it is largely unquestioned in India, and when Indians come to the US, they usually hide this history of terrible labor treatment from Americans that they meet.

Secondly, India is no doing anything to reduce the horrific labor exploitation in the country. Instead, Indians are IMPORTING this philosophy in the US.

There is now ample evidence that that same exploitation is enforced when possible on IT workers by Indian firms (see the article How Infosys Violated B-1 Visa Law and Charged Clients a 98.6% Margin) That is the Indian modality of the income distribution, and poor worker treatment is being imported from India to the United States.