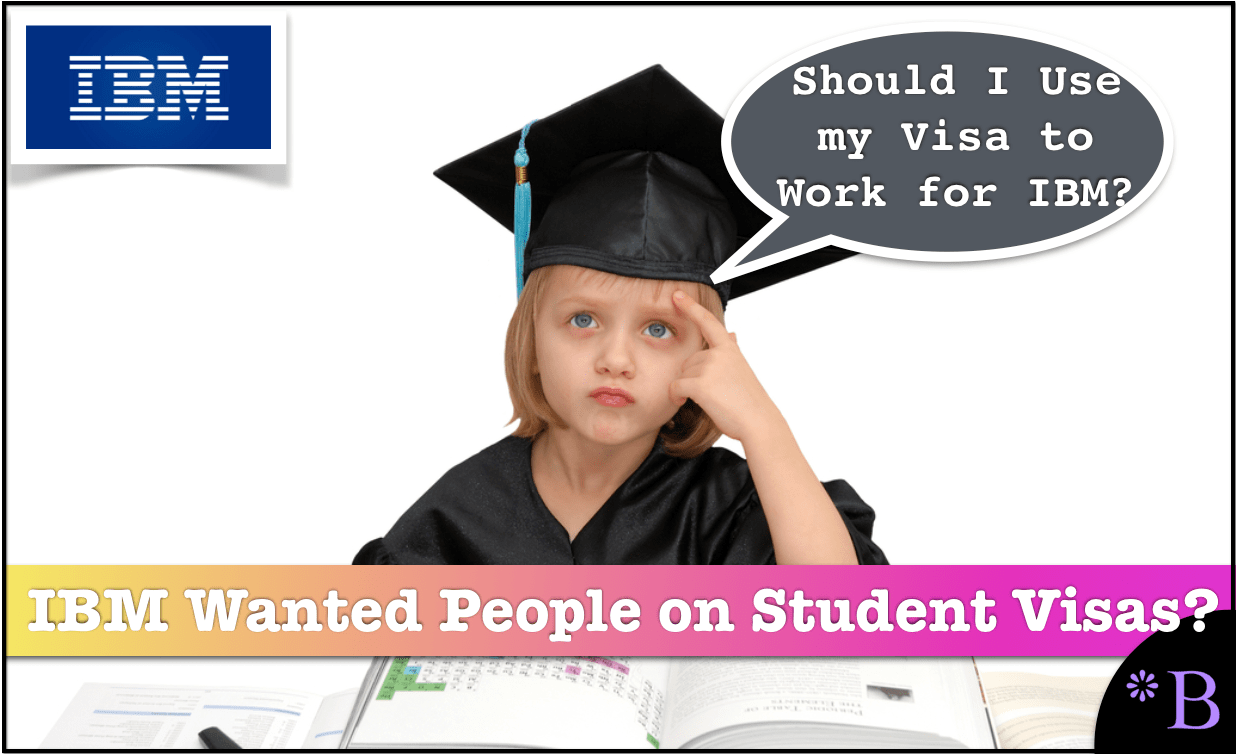 Reading through the senate hearing on H1-B abuse, it was interesting to run into this about how IBM advertised for only people on the student OPT visa for a position.

What is the OPT Program?

The OPT program is described by Protect US Workers as follows.

Optional Practical Training, better known as OPT, is offered to foreign student graduates. OPT provides foreign graduates the ability to work after college graduation and any company that hires the foreign graduate would receive the benefit of not paying certain taxes including taxes that go into Social Security and Medicare.

Trolling for People on Student Visas

Companies have determined that the OPT program is a great place to find exceedingly cheap labor, labor from those desperate to stay in the US.

Aside from the national security risks posed by the program, there is also the concern that OPT is allowing employers to use foreign students to bypass worker protections in other immigration programs. Foreign students don’t have to be paid at all, and when they are paid they are substantially cheaper than U.S. workers because employers are generally not required to make the 7.65% wage contribution on their behalf for Social Security and Medicare taxes.

People on a student visa are also more likely to take a very poorly paid job with IBM or another company to continue to work in the US.

They also become susceptible to exploitation because they are desperate to stay in the country. Foreign students are being targeted.(emphasis added) In 2013, IBM placed ads on their webpage with the following mandatory job requirement: “Should have a valid OPT work permit for legal work authorization in the United States.” And, the job was located in Idaho.

The anti-discrimination provision of the Immigration & Nationality Act does not permit employers to express or imply a preference for temporary visa holders over U.S. workers, for any employment opportunity in the United States.

Wait, what if IBM did not express the preference, but then just took in a number of resumes, and then selected the person the student OPT visa? If that had happened, would The Department of Justice had a problem with this?

The Department of Justice opened an investigation. In late 2013, the Department of Justice announced it had reached a settlement agreement with IBM under the terms of which the company agreed to pay $44,400 in civil penalties, revise its hiring and recruiting procedures and train its human resources personnel to ensure compliance with thaw law, and to be subject to reporting requirements for a period of two years. – Immigration Reforms Needed to Protect Skilled American Workers (Senate Statement)

How will IBM ever recover from this $44,400 fine? What would IBM’s motivation be for not doing this in the future? All they need to do to stay away from this fine in the future is not advertise the fact they are looking for a person with an OPT visa.

Nearly every time Ginni Rometty, the CEO of IBM, is interviewed, she talks about the importance of skills. However, what she leaves out is that IBM refuses to publish where IBM has its employees because IBM has an embarrassing number of employees and is now derogatorily referred to as “Indian Business Machines.”

Left out of this “high minded” conversation is that IBM knowingly advertised to hire people on student visas. CBS is owned by a multinational and will give any CEO who comes on to any show a series of softball questions that burnish their image and allow them to get their marketing message out. We don’t listen to what IBM says, because their statements are highly inaccurate and do not match their behavior.

How the OPT Program Was Expanded

The OPT program has gone from a small program to a massive program. This has increased the incentive companies like IBM to “leverage” the program for what it was not intended. It now provides IBM and other multinational Fortune 500 companies with another source of extremely low cost labor.

The administrations of both George W. Bush and Barack Obama sneakily expanded the foreign worker supply by administrative fiat, including expansion of the Optional Practical Training (OPT) program, through with 560,000 foreign “students” have been authorized to work in the US. It may well be America’s largest guest-worker rivals (DACA) program, which allowed illegal alien children to remain in the United States.

It has never been authorized by Congress. This backdoor H1-B visa increase allows foreign students to work with little monitoring, no wage protections, no payment of Social Security payroll taxes, and no requirement for employers to demonstrate labor market shortages. We’ll show you how Microsoft lobbied the Bush White House for the program on the cocktail party circuit. – Sold Out

How the OPT Visa is Barely Regulated

The OPT visa has the ultimate unqualified program.

While the labor protections for American workers under the H1-B program are meager, there are none at all in OPT: no wage floor, no cap, no recruitment or non displacement requirements, and virtually no oversight. Basic data collection is so abysmal, the Government Accountability Office found in 2014, that the feds “cannot determine whether students with employment authorization are working in jobs related to their studies and not exceeding regulatory limits on employment.” – Sold Out