Last Updated on April 29, 2021 by HostingandOther 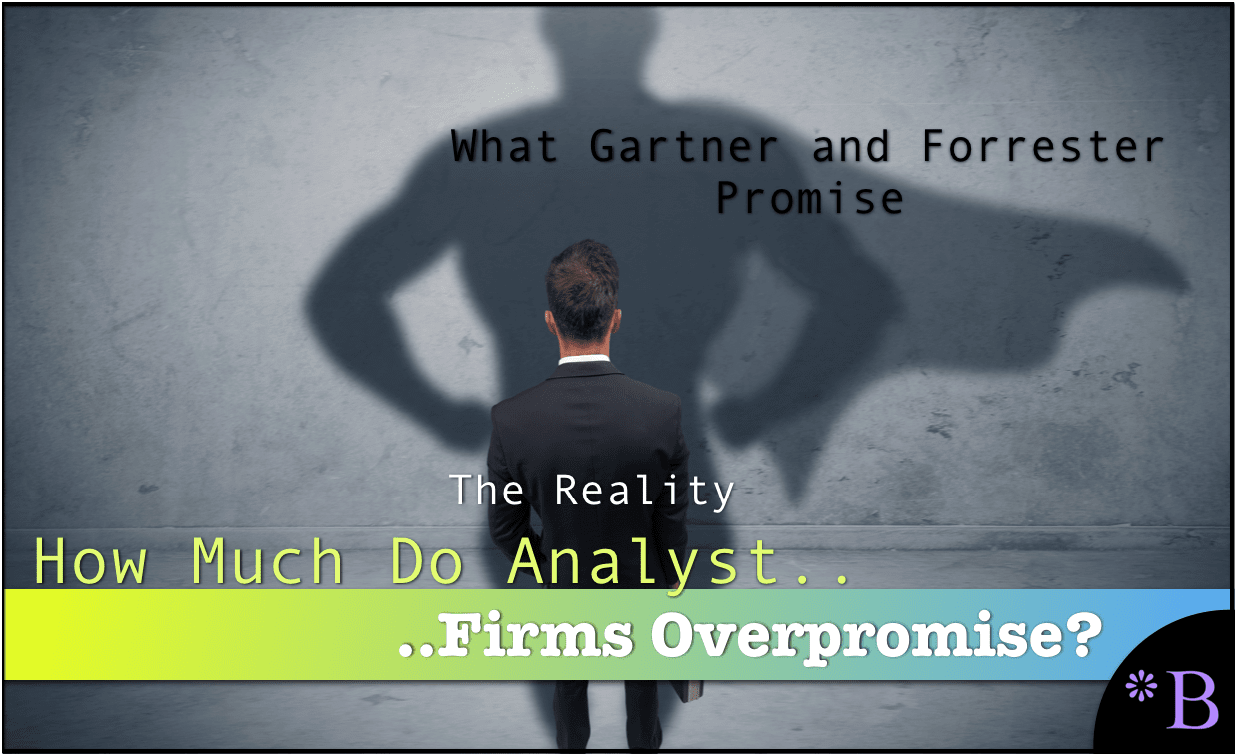 Video Introduction: How IT Analyst Firms Like Gartner and Forrester Overpromise Marketing Exposure to Vendors

If we look at the coverage in, say IDC, Forrester, or Gartner, their coverage is most advantageous for the largest and most powerful vendors, or vendors that can raise money and give some of that money to Gartner so they can score well in a Magic Quadrant. These vendors can afford to pay these entities the most money, so Gartner pushes them upwards and drives customers to the highest cost solutions. You will learn how Gartner overpromises the marketing benefits it can provide to medium to smaller vendors. And a major reason for this is that Gartner is already “owned” by the largest vendors, and their sales culture makes them overpromise what they can do and maximize the amount of money they pull out of the most vendors.

The Focus of IT Analyst Firms — Legitimate Research or Profit Maximization?

Gartner has highly aggressive growth goals that they communicate liberally within the company. The IT analysts would like the industry to think that they can do quality research and maximize profit. This is not possible and has never been possible in the history of research. Real research means publishing what is true, often at the expense of what is profitable.

This is why private companies have such a terrible reputation in research, with the primary entities that have stood out in research being entities like Bell Labs and Xerox PARC Labs, which were run as non-profit labs. Still, highly profitable entities, or in the case of Bell Telephone/AT&T, was a government-regulated monopoly. As soon as AT&T was broken into the baby bells and Bell Labs had to be “market directed,” their prominence went into a steep decline.

None of the major IT analyst firms are above publishing the most inaccurate information as long as the price is right. We cover this topic in the article How to Understand Forrester’s Fake S/4HANA TCO Study. Forrester used three samples to project an implementation cost of $877,000 and six months in this study. This is for an application whose previous version never costs less than $10 million (and routinely takes $100 million) or takes less than a year and takes multiple years in many cases. This is also for a new and immature application, hence INCREASING rather than decreasing its likely implementation duration.

How Bad Does it Get?

We have routinely lampooned various publications by these entities, including the article How Gartner Distributes Press Releases On HANA. There is literally no level of inaccuracy that we can document, even when our articles are widely read, that seems to cause questioning of how IT analysts can be legitimate if the quality of their output is so rigged and of such poor quality. Several publications are rigged and lack basic analytical competence, with important information left out or miscalculated.

Neither IDC, Forrester, nor Gartner cares what is true. They try to maximize their profits, which means sidling up to the entities with the most resources and presenting the story they want to be presented.

How Medium and Small Vendors Should Look at Gartner

The first thing to recognize is that the IT analyst system is highly corrupt. One firm, IDC, is owned by a Chinese firm, which is a bit of a joke given China is only a few places above North Korea in press freedom. But IDC was not an honest firm before their acquisition by a corrupt Chinese company that is most likely working in conjunction with the Communist Party of China or (CPC) to pull US business knowledge through the IDC.
Even medium-sized vendors (say around 1,000 employees or below) receive generic coverage from the major IT analysts. The entire scenario is a bidding war in which medium and small vendors cannot compete.

There are some exceptions, like the data warehousing vendor Snowflake (now with around 1600 employees). 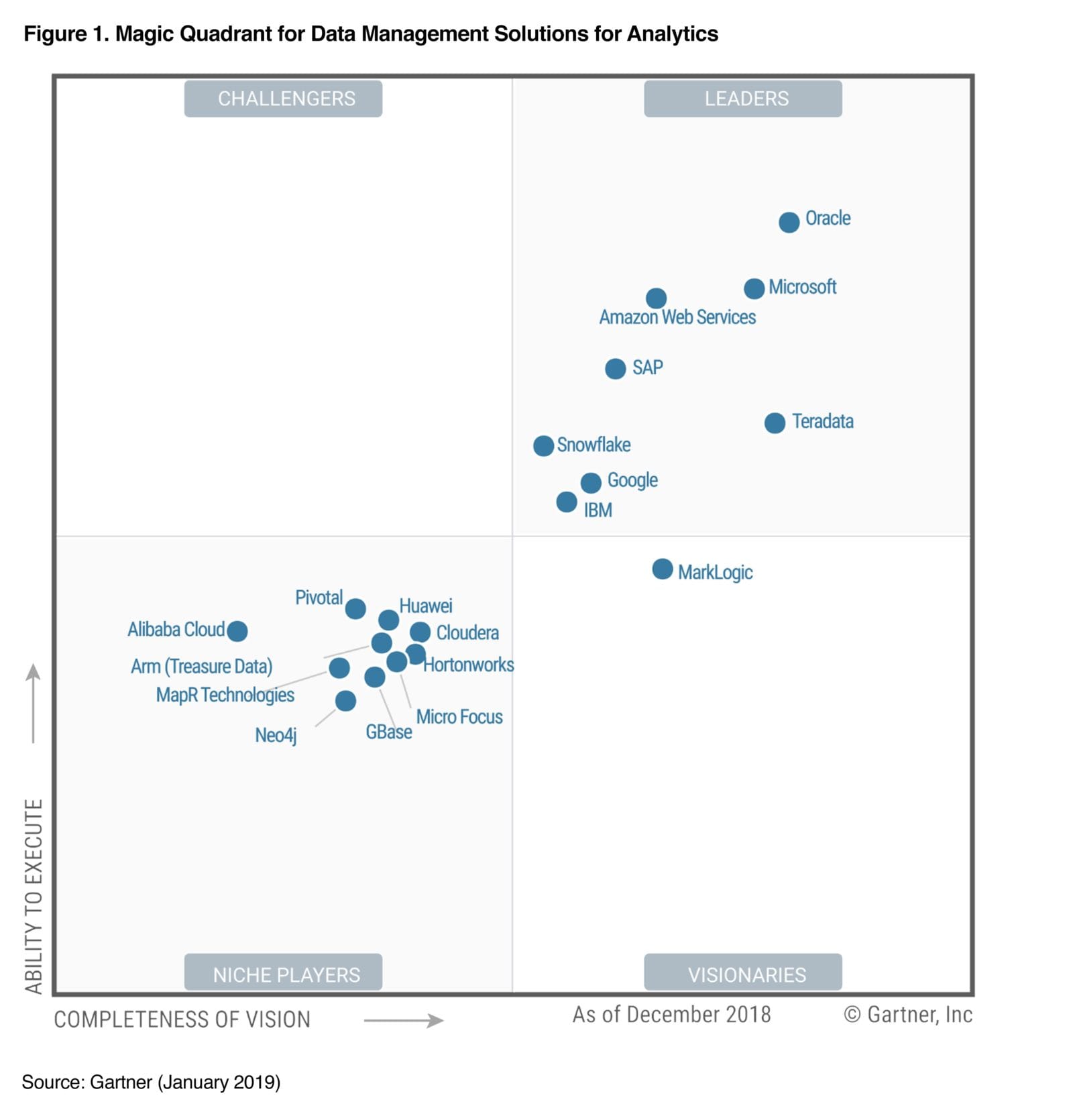 Notice how one of the only moderate-sized vendors in Gartner’s Data Management Solution of Analytics was Snowflake.

For most medium and small vendors, “making it rain” at the Gartner headquarters will not be a reasonable option.

I wrote a book on Gartner. I cover their business model in the article The Problem with How Gartner Makes its Money. They favor large vendors over small and against open source in the article How Gartner Undermines Open Source for its Own Benefits.

Most non-major or non-majorly funded vendors get listed in some “mini” MQ type segments. And then receive a profile of the company on the site.

Over Promising to Medium and Small Vendors

IDC, Forrester, and Gartner are “in the tank” for the major vendors. They are throwing their weight in favor of the largest (or extremely well-heeled vendors). Therefore they can’t also throw their influence in favor of medium and small vendors. However, these firms can promise that they will because while the medium and small vendors are not entities they can do a lot for, they are still revenue sources for IDC, Forrester, and Gartner. This is where salesmanship comes in. Salespeople for these firms (within our view, Gartner being the worst) tell the representatives from the medium and small firms that they can significantly improve their condition by paying off these firms.

In some cases, Gartner salespeople have explained the scenario as basically an arms race — using the logic that since other firms are paying them, to “stay competitive,” the vendor they are pitching must match the payments by other vendors so as not to “fall behind.”

IDC, Forrester, and Gartner promise benefits to most vendors that they can’t back up. They are marketing to every vendor in every category, but they can’t give everyone preferential treatment.

The major IT analyst firms are mass entities; they reach out to virtually every vendor on the planet and offer a generic type of coverage.

The current highly concentrated IT analyst system (Gartner has made over 70 acquisitions in its life as a firm) benefits the largest vendors the most, or vendors that are well-heeled with startup money. Medium and smaller vendors suffer from this system, and open source projects, which can afford to pay nothing, are entirely cut out of the IT analyst recommendations and receive zero coverage and active lobbying and advice from the IT analyst firms not to use open-source software. Another modality that the IT analyst firms aggressively advise against is custom development, not because of any actual research, but because commercial vendors oppose custom development.

It should be noted that none of this has anything to do with the quality of applications or databases. Databases such as PostgreSQL and many others have demonstrated excellent options, but to the IT analyst firms, open-source does not exist.

The system’s genius is that while it primarily benefits the largest vendors, at the expense of all other vendors, the participation of medium and small vendors with IT analysts helps to legitimize the overall system rather than having it called out for what it is.