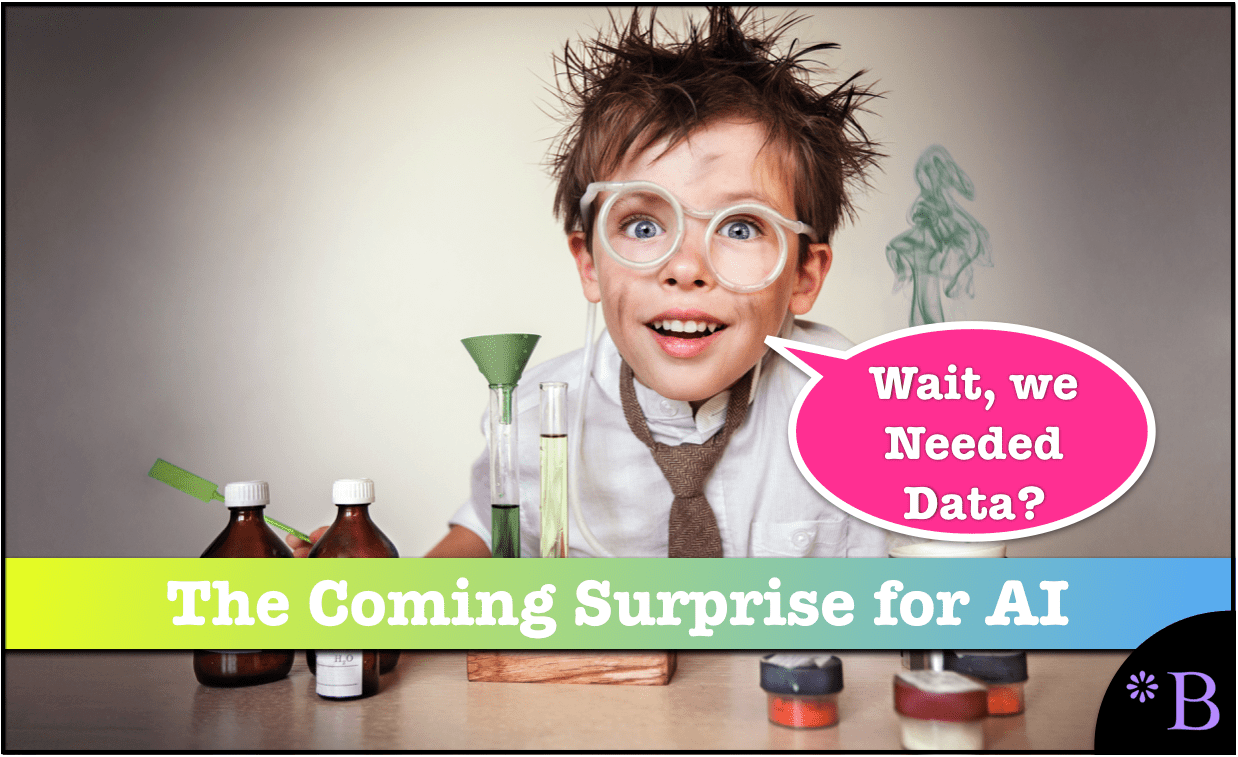 We are now someway into the AI/ML bubble. What are AI projects finding to their dismay? A lack of data for running AI/ML.

Quotes from IBM on AI Projects

“Many ambitious artificial intelligence-backed projects never come to fruition due in large part to issues with data collection and cleaning, according to Arvind Krishna, PhD, IBM’s senior vice president of cloud and cognitive software.

During an interview with The Wall Street Journal earlier this month, Dr. Krishna noted that a common reason projects using IBM Watson AI often unravel is that companies are unprepared for the amount of time and money they must spend just collecting and preparing data. Those unglamorous yet crucial tasks, he said, make up approximately 80 percent of an entire project.

This quote is problematic from multiple dimensions.

Watson has been a failed product for IBM. It is AI directed at health care, which is still essentially non-functional after billions and over a decade of investment. However, this article is not about Watson (we have quotes about the problems with IBM Watson in the references). This quotation is about AI writ large. But it is curious that with Watson, IBM ran into its data problems as the following quote describes.

“The employees said there was never clear agreement, for example, on how to merge data gathered by the three companies into a unified format that could be used by Watson. That made it more difficult to deliver insights to help hospitals target medical services to specific patients, cut costs, and improve the quality of care.

With this acquisition, IBM will be one of the world’s leading health data, analytics and insights companies, and the only one that can deliver the unique cognitive capabilities of the Watson platform,” Deborah DiSanzo, general manager for IBM Watson Health, said in a statement following the Truven acquisition.

But the deals presented the difficult task of harmonizing all that data – housed in different formats, and focused on different aspects of patient care – into a model that could be digested by Watson, a challenge that is not unique to IBM.” – STAT

Perhaps IBM is not the company to rely upon for “spiffing” up your data for your AI project. As it is now quite clear, they were not able to figure out how to do it for their internal project, for which they had more resources than any one individual IBM project will likely ever match. IBM Watson is specific health care focused AI solution. However, IBM appears also to call AI not related to that particular item Watson as well, which is, of course, confusing.

Let us review this portion of the quote from Dr. Krishna.

“often unravel is that companies are unprepared for the amount of time and money they must spend just collecting and preparing data.”

When IBM sold the project, did they explain the level of effort this would take? This quote makes it sound like someone else, that IBM does not communicate with, is selling AI projects that IBM consulting then has to work. Is Dr. Krishna that his own IBM sales team is communicating with these same customers before the IBM AI project begins?

“You run out of patience along the way, because you spend your first year just collecting and cleansing the data,” he said. “And you say, ‘Hey, wait a moment, where’s the AI? I’m not getting the benefit.’ And you kind of bail on it.”

Questions Related to this IBM Quotation

How accurate are the IBM machine learning quotations.

The question of underselling the data effort and overselling the benefits of AI is all-important because IBM has routinely oversold its Watson solution as the following quotation attests.

“But it also earned ill will and skepticism by boasting of Watson’s abilities. “They came in with marketing first, product second, and got everybody excited,”” –  Robert Wachter, chair of the department of medicine at the University of California, San Francisco

“Robert Burns, a professor of health care management at the University of Pennsylvania’s Wharton School, said the complexity of integrating mis-matched data sets has vexed hospitals and other health care entities for decades. It is folly, he said, for IBM, or any company outside the industry, to suggest the problem can quickly be solved to cure terminal diseases or dramatically improve health care delivery.” – STAT

And of course, this is in no way limited to IBM. It is difficult to find a consulting company in IT that is not making outrageous claims around AI. Let us review several.

Getting Your AI From Wipro

Wipro, a firm not known for forecasting, is now your one-stop-shop for AI.

Getting Your AI From Infosys 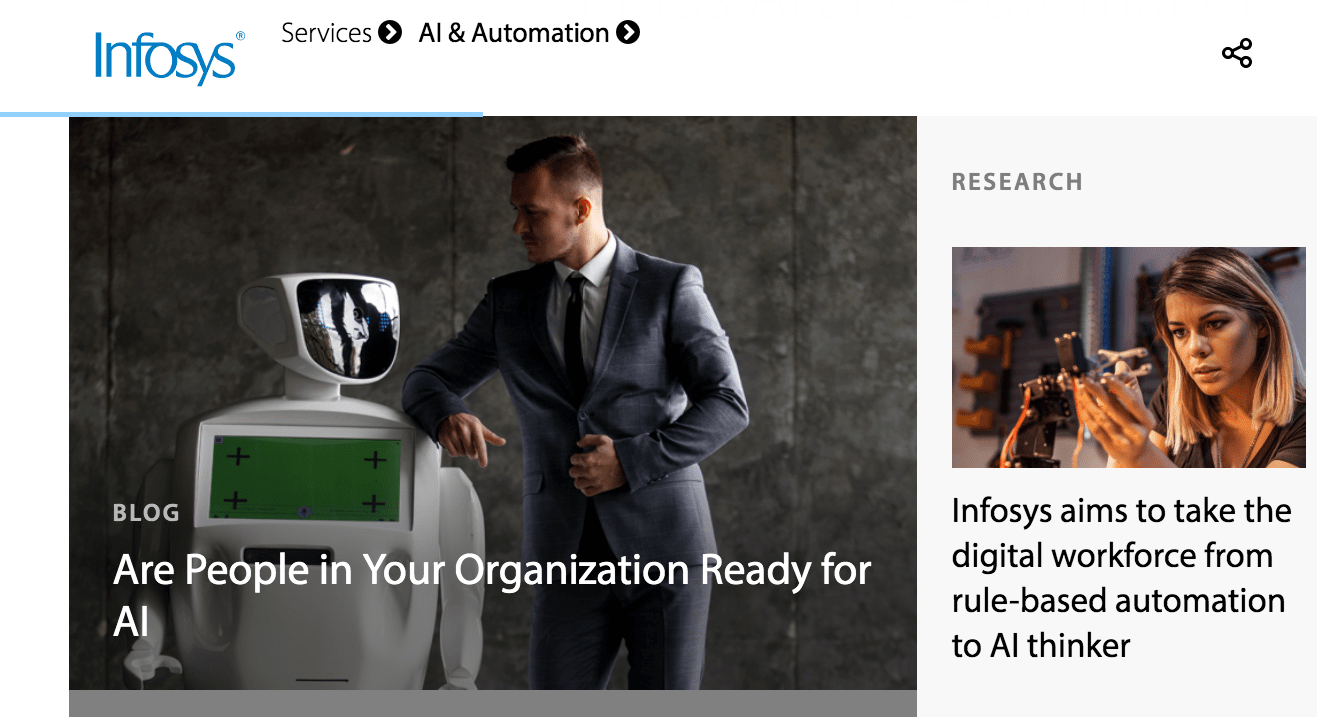 Infosys is another AI expert. So many AI experts to choose from among the giant IT consulting firms. That man later married that robot.

Getting Your AI From Capgemini

This video from Cap Gemini is filled with inaccuracies, but if it does not “jack you up on AI,” it is unclear if anything will.

As with WiPro and Infosys, Cap Gemini is a non-entity in the forecasting space, but that does stop them from producing a killer video.

Still, Dr. Krishna maintained that the fairly common occurrence of halted AI projects is “the nature of any early technology.” Even as so many fizzle out, IBM still has about 20,000 more ongoing AI projects, a number that he deemed indicative of overall success.”

There is a severe problem with Dr. Krishna’s statement here. This is because AI is not new. Is Dr. Krishna unaware of this fact?

AI has failed to produce results in at least two separate historical AI bubbles (in the 1960s and early 1970s, the 1980s), each one of them followed by an “AI winter.” Many of the people working in data science/AI are not even aware of these previous bubbles. And how far back AI goes surprises most people, we discuss this topic with.

“Many of them predicted that a machine as intelligent as a human being would exist in no more than a generation and they were given millions of dollars to make this vision come true.

Eventually, it became obvious that they had grossly underestimated the difficulty of the project. In 1973, in response to the criticism from James Lighthill and ongoing pressure from congress, the U.S. and British Governments stopped funding undirected research into artificial intelligence, and the difficult years that followed would later be known as an “AI winter“.” – Wikipedia 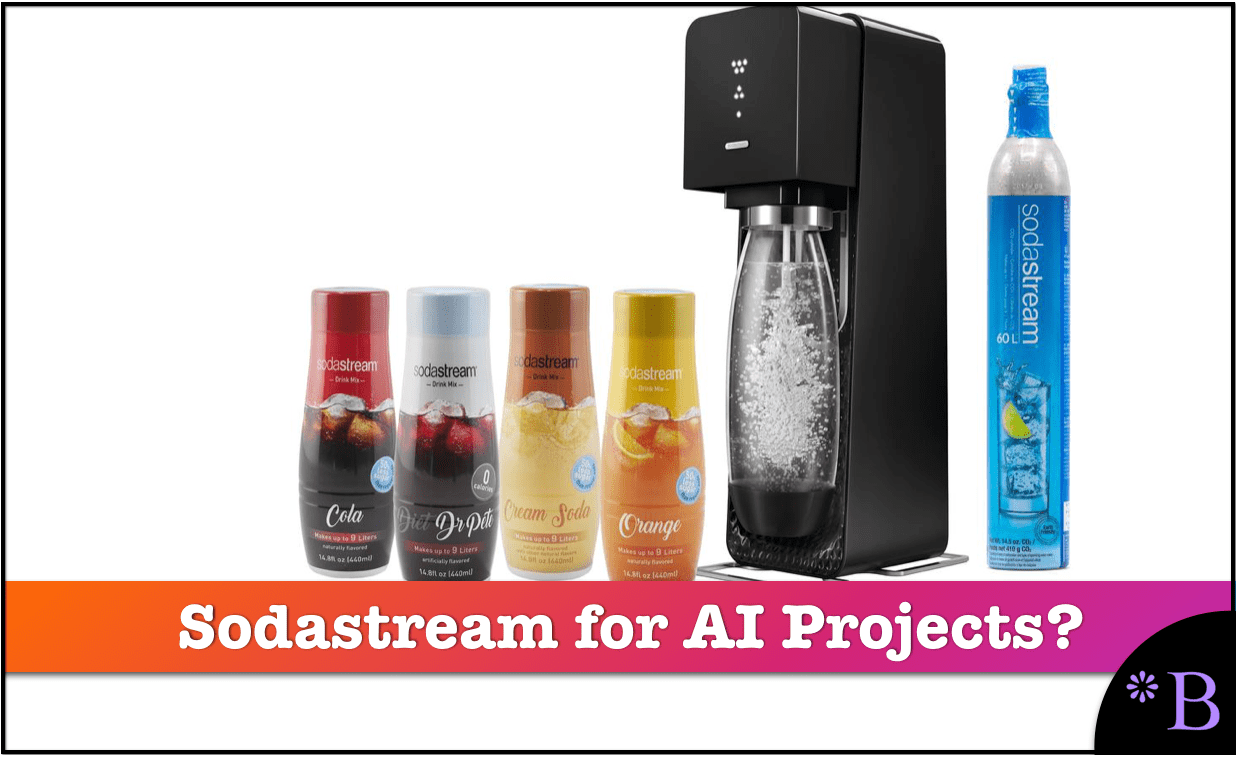 For those of you who have not tried SodaStream, you really should. It not only can add fizzle to new drinks, but it can give that “sparkling quality” to drinks that have gone flat. The problem? As of yet, there is no SodaStream for AI projects.

To review a portion of the quote from Dr. Krishna.

“Even as so many fizzle out, IBM still has about 20,000 more ongoing AI projects, a number that he deemed indicative of overall success.”

And when questioned about IBM’s success in AI, he responded defensively with the following quotation.

This brings up the following questions

IBM certainly sees this as a success, but IBM only cares about billing hours on projects. By this definition, even AI projects where hours are billed but not work is done considered auspicious by the consulting company. However, IBM clients measure success, not by IBM’s metric. That is, customers that invest in AI measure the benefit by how AI improves the accuracy of their various predictions.

The idea that IBM would have so many AI projects ongoing, and that there would be so little published about the benefits of AI received by companies is odd.

Another question is, why is IBM placing data science resources on-site and billing for them if the data is mostly unavailable and if it may take a year or more to develop the data? Would IBM sell an automobile service plan for a customer that has yet to purchase an automobile? It seems like a simple question to ask of what data the client has that can be used. Without this, IBM has no idea if their client can benefit from an AI project.

This topic of data availability brings up the question of how common it is for companies that engage in AI projects have the necessary items to pull such projects off successfully.

To evaluate this, below are the individual estimates of the author and three other experienced resources in forecasting and ML/AI.

The Implications of the Poll

If this poll is roughly representative, it means that AI projects are begun with a minimal likelihood of success. AI projects have been ongoing for a number of years now, and given these estimates, it is easy to project very high rates of failure. When these failures do happen, they will be hidden by consulting firms and vendors. And it will take far longer to find out the real story about the outcomes of these projects.

The question arises — how can an entire bubble be based upon AI, if such a small percentage of companies can be successful with these projects?

What Happened to Data Lakes?

For the better part of a decade, companies were told to through large amounts of unstructured data into data lakes. The idea was that data was now accumulating so quickly that there was no time to organize it. NoSQL is hot, and it’s happening. It’s now. The point was to gather almost as much as you could. The data scientists would come by later and sort out everything after it was collected. Unstructured or semi-structured data was seen almost as a virtue

However, now it is taking years to assemble this data, and now that it comes time to use this data, it takes lengthy projects to make is usable. Was the projection about the benefits of just collecting data and worrying about organizing it later actually justified, or was this waste? 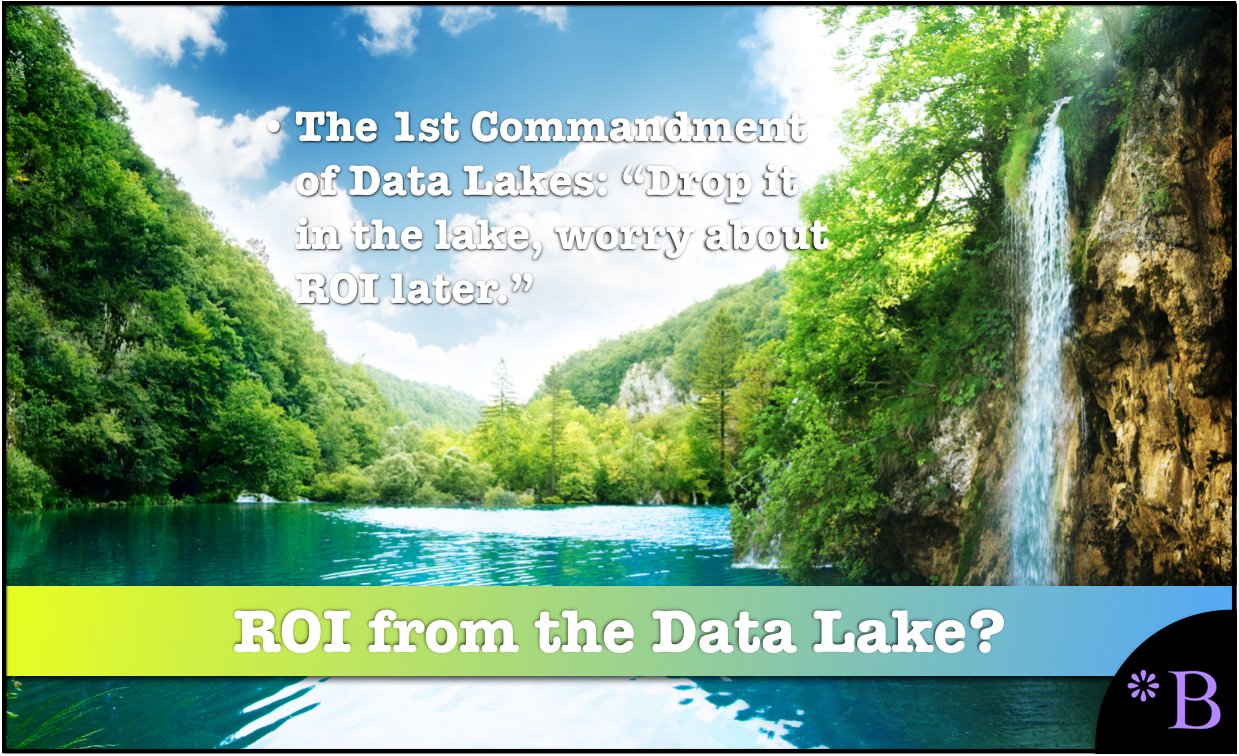 Companies like IBM love charging for data lake projects. It allows them to talk up the future potential that will be released from AI. However, if Dr. Krishna is correct, these data lakes may not be as valuable as they were first proposed.

This is attested to by the following quotation.

“Data lakes promised to be the next generation of data warehouses, a central place to dump all of a company’s data. Unlike the warehouse, however, data lakes allow companies to dump data into the lake without ordering it beforehand. The problem with this approach, however, is that it simply delays the inevitable need to make sense of that data.”

Dataversity stated that 2019 is the year when companies begin “draining the data lake.” Data lakes did not appear that long ago, and we are draining them already?

The Otherworldly Claims of AI

Consulting firms are making significant and unsubstantiated claims around AI. Consulting firms with no background in either AI or forecasting are making world-changing claims about their AI capabilities, and the claims appear to be uniform.

“In the world of IT in general, about 50% of projects run either late, over budget or get halted. I’m going to guess that AI is not dramatically different.”

Not all IT projects have the same success rate. This is something else that Dr. Krishna should know. AI projects, because they are so firmly based upon false claims, will have a much higher failure rate than 50%. The AI Project Preparedness Matrix above indicate that most of the AI projects that are sold are sold into companies that can’t complete them successfully.

Who Are the AI Poll Contributors?