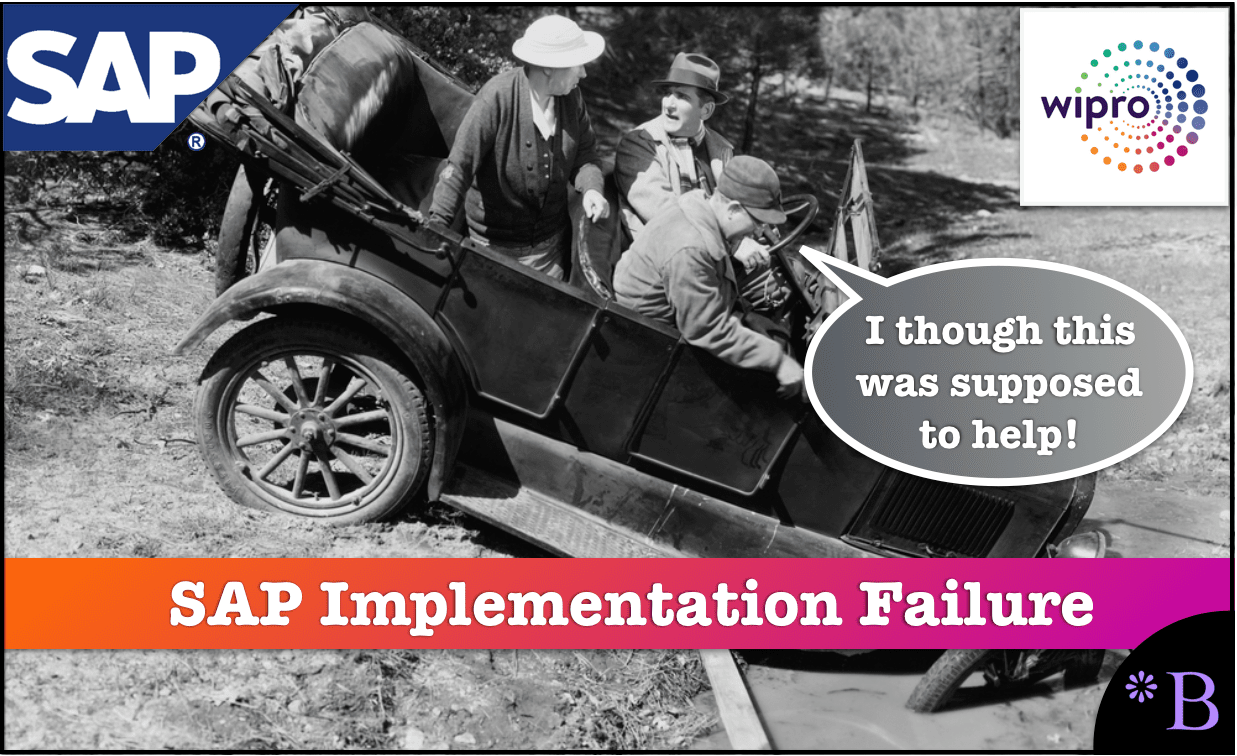 The Claims by National Grid

This is the first claim that caught our eye in the filling by National Grid.

Specifically, inherent technical defects in the new SAP system rendered National Grid unable to operate its core functions relating to payroll, supply chain and procurement, accounts payable, and financial close and reporting. Wipro’s failures caused National Grid to suffer hundreds of millions of dollars in damages. The first series of payrolls processed after go-live were plagued by errors. As an initial matter, payroll programs that took a few hours to run on National Grid’s legacy payroll systems took weeks to run on the new SAP system (in part due to the flawed design of National Grid’s SAP in-house cash module).

This would have been a surprise as the project would have likely promised improvements in this area, as SAP has been massively exaggerating what SAP ERP can do. However, this quote brings up a question about how the system passed the sign-off stage. We cover the tricks that consulting firms use to get companies to give sign off on systems. The consulting firm covers itself by having the client sign off that they agree the system is ready to go live. WiPro will use this document against National Grid in the lawsuit.

Claim #2: The Problems With the Payroll System

This is quite basic functionality and considered essential for operations. However, it is also a common problem cited in lawsuits against SAP and SAP consulting firms. This same issue happened to The City of San Diego, as we cover in the article The Art of Blaming the Client When A Project Goes South.

Within weeks after go-live, the SAP system could not properly run National Grid’s business processes for paying vendors. By January 2013, the backlog of unpaid invoices exceeded 15,000, caused in part by data corruption that generated inaccurate vendor invoices.

Unable to obtain the supplies it needed to service its customers and run its operations, National Grid had to prematurely pay vendors, in estimated amounts, to ensure that they would continue to supply National Grid with required materials. These pre-payments resulted in reconciliation problems when National Grid had to subsequently determine amounts that were advanced to vendors in excess of what was actually owed.

In other instances, National Grid unknowingly paid vendors for the same invoice multiple times, which took extensive research and effort to uncover and correct.

This quote describes a ridiculous situation that calls into question how much the system was tested before being cutover. This is not only the consulting firm’s responsibility, and questions around National Grid’s efforts in this area and the timeline that may have lead corners to be cut naturally arise. The only way that this could have happened is if the National Grid management of the project was weak. Remember, this is WiPro. It is an Indian consulting firm. All of the managers at WiPro would have been corrupt and provided false information to National Grid executives and members of the project team.

Claim #4: Cash Reconciliation Was a Disaster

As a result, a cash reconciliation team had to be formed to contact banks to determine whether checks were actually cashed or not. This encashment problem forced National Grid to write-off approximately $3 million on approximately 40,000 checks that were cashed or voided in error.

Following go-live, National Grid experienced extreme delays in its financial close and reporting processes, which jeopardized its ability to carry out each of the functions discussed above. For months, neither National Grid nor its auditors could rely on the integrity of the data generated by its new SAP accounting management systems.

National Grid was therefore forced to repeatedly delay issuing critical financial and regulatory reports (both state and federal) regarding its financial status, drawing penalties from its regulators and jeopardizing its relations with lenders.

Obviously, with the previous items, there would have been no way to close the books. This means that National Grid turned into a full-time firefighting operation as soon as they went live.

Claim #6: National Grid Was Stunned by How BadWipro’s Implementation Was

The financial close delays after go-live were stunning: whereas National Grid typically performed its monthly financial close in 4 working days, the first financial close after go-live took 43 working days. These delays were caused by (among other things): (i) the instability and defects in the SAP system; (ii) inaccurate data conversion and lack of data capacity; (iii) defective application interfaces; and (iv) the cascading effects of the payroll and supply chain issues described above.

Again, the basic things could not be done in the ERP system. But notice for the first time in these quotes we have instability and defects in the SAP system called National Grid.

Nor could National Grid take advantage of certain attributes of the SAP solution that are designed to enhance an organization’s financial close and reporting capabilities. The system’s flawed mapping and related design defects prevented National Grid from benefitting from the SAP FERC module, which addresses unique accounting requirements set by FERC for public utilities like National Grid.

SAP ERP had defects? Why did this claim not receive broader coverage? This is a major issue, and I cannot recall this specific claim ever breaking into the SAP community’s consciousness.

For more than a year after go-live, National Grid was unable to use the SAP FERC module to process the extensive financial reports it must regularly provide to FERC, and the company was forced to seek numerous extensions from its regulators.

This module, FERC, is a financial reporting module for the utility solution. It is widespread for SAP to exaggerate its industry solutions’ capabilities, which appears to be another case. However, no doubt, FERC would have been a central selling point used by SAP and Wipro during the project’s sales stage.

What Could National Grid Have Done Differently?

National Grid took SAP and Wipro’s word that FERC was ready to be used (SAP ERP). However, National Grid could have figured out if FERC was, in fact, ready to be implemented. We review SAP solutions for readiness. We use techniques to determine the general degree to which an application or module, or industry solution is mature and ready to be implemented. All of the SAP consulting companies that we have run into lie about SAP software’s maturity and capability. So neither they nor SAP is reliable sources of information for whether any SAP item is ready for implementation.

The quote on FERC continues.

FERC also denied National Grid the ability to engage in short-term borrowing from banks due to the company’s inability to file FERC financial reports. The problems with the SAP FERC module should have been readily evident during testing, but Wipro never tested the module and none of the problems were discovered until after go-live.

This lack of testing is prevalent in SAP consulting firms. SAP has many problems with its applications and various modules. However, there is a strong tendency in SAP consulting firms to “take SAP’s word for it” that something works. This claim is made against Wipro, but actually, SAP shares in the responsibility here for having such continual problems in so much of its software.

If you have to hire 321 external resources to stabilize a project, you obviously have a massive issue on your hands.

This is little discussed in the SAP and ERP industry. When a project does fail, what are the costs of remediating the situation? The loss is often the project cost, but when it negatively impacts the business,  the business costs and the remediation must be added.

One has to be careful in making accusations in legal cases at face value. There is no requirement in a US legal case that any stated be true. However, these issues are explained in specific detail by National Grid. If there were no lawsuit filed, we would never have heard of these claims as the implementation failure would have been suppressed. SAP consultants usually give a highly misleading representation of the benefits of SAP implementations.

This is what can happen when an SAP project goes south. Project problems and failures occur far more often than are generally discussed because they are suppressed. They are suppressed by the customers, by SAP, and by SAP consultants.