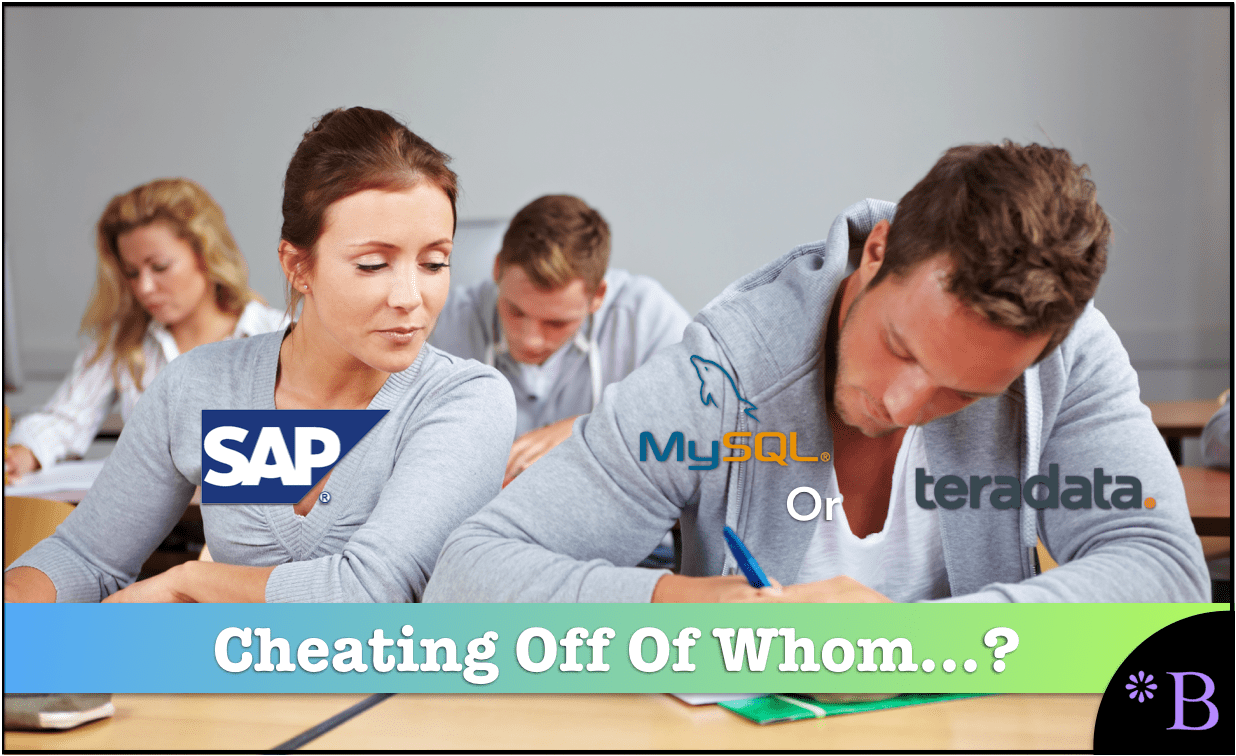 The recent submissions to the court by Teradata outline what IP Teradata asserts was taken by SAP during their partnership with SAP. In one of the patent documents, they have claimed to have taken concepts from MySQL rather than Teradata. This is expressed in the following quotation debating one of the patents that Teradata is accusing SAP of violating.

One might think that this is a good strategy. After all, it provides a direct explanation of where SAP obtained the IP that does not subject them to liability in the Teradata lawsuit.

The problem (for SAP) is that SAP is not allowed to do this under MySQL’s GNU General Public License or GPL.

This is covered by the following portions of the GNU GPL.

For example, if you distribute copies of such a program, whether gratis or for a fee, you must pass on to the recipients the same freedoms that you received. You must make sure that they, too, receive or can get the source code. And you must show them these terms so they know their rights.

By contrast, the GNU General Public License is intended to guarantee your freedom to share and change all versions of a program–to make sure it remains free software for all its users. We, the Free Software Foundation, use the GNU General Public License for most of our software; it applies also to any other work released this way by its authors. You can apply it to your programs, too. – GNU

And it is explained by Markian Jaworsky.

One can only use that argument of copying from a GNU GPL covered code base if you are planning to make your product open-source as well.  Open-source being protected by both copyright and contract law.

Why This Clause in the GPL is So Necessary

If this clause did not exist, the private companies would routinely take public projects and then claim they performed the invention or created the IP and then never give back to the public project. This needs to be made clear. For-profit companies routinely pretend to have innovative areas where they have not and will steal as much from the public domain as possible and claim the invention of things they had nothing to do with.

However, faking innovation is alive and well in the US software industry and many other industries, with pharmaceuticals being another major area. Currently, we are in the midst of an enormous AI bubble, with companies that have nothing added to AI or faking the use of AI raising massive sums of money claiming that they do. SAP has tried to sell public domain machine learning algorithms that are decades old, under at least the impression that SAP had something to do with developing them, which they did not.

While Gartner was being paid by SAP to write ridiculously flattering and ultimately false articles about HANA, as we cover in the article How Gartner Got HANA So Wrong, and while companies like IBM, Accenture, Wipro, and the overall SAP ecosystem were mindlessly repeating SAP’s false claims about HANA’s innovation, Brightwork Research & Analysis has been saying for some time that SAP did not create new IP when it developed HANA. We cover this in the article Did SAP Reinvent the Wheel with HANA?

SAP HANA still has major memory management problems that other databases do not have, meaning HANA is a significant step back for companies versus databases pulled out and replaced with HANA. Another report came in on HANA memory management recently (and adds to HANA’s CPU management problems that we cover in the article How HANA Takes 30 to 40 Times the Memory of Other Databases). But these reports show the same issue, meaning that SAP is doing little to correct the design flaws with HANA.

All of this is hidden, with people only agreeing to share this information if their names are never associated with what I report. Any IT worker sharing information that is negative about SAP, whose name became public, would be reprimanded by their IT director. No adverse information about customers can be published….until that is, and if the company seeks monetary damages against a vendor or consulting firm. Until that time, everything is censored.

The rule is the same for both IT departments workers and business users,

..and allow the mega-vendors and their associated “ecosystem” to rob your company so that the top brass in the IT department can continue to add the latest mega vendor versions to their resume. And to be wined and dined by the mega vendor and consulting account managers. Remember, as we learned from Hunter Biden, it is not real corruption, and it’s just “soft” corruption. Or the cuddly kind of corruption. “Real” corruption only occurs when a suitcase of money is involved, not when you sell out the interests of your employer.

Failures are explained away with establishment articles from the Harvard Business Review that discuss the importance of a “shared vision,” “top management support,” and a host of other topics that never get to the information quality provided to software buyers. Or the account control used by mega-vendors and consulting firms against their customers.

Why the Case Between SAP and Teradata Keeps Delivering Information

Ordinarily, SAP gets to make their claims against a backdrop of paid-off media entities and consulting firms with no other information-sharing purpose than obtaining highly wasteful SAP projects. In this environment, everything is stacked in their favor.

However, in court, SAP is trying to win its case against Teradata, and this will force it to point out to other databases where it copied the things it lied about inventing internally. This is entirely inconsistent with their messaging to customers. The official story of HANA’s development has already been manufactured by SAP, as we cover in the article Did Hasso Plattner and His Ph.D. Students Invent HANA? Why is the story now changing?

SAP wants to have the court documents remain undiscussed to have two stories—one story for the court and a separate, entirely inconsistent account for customers. And SAP’s compliant media entities will make sure they don’t cover the details of the case. 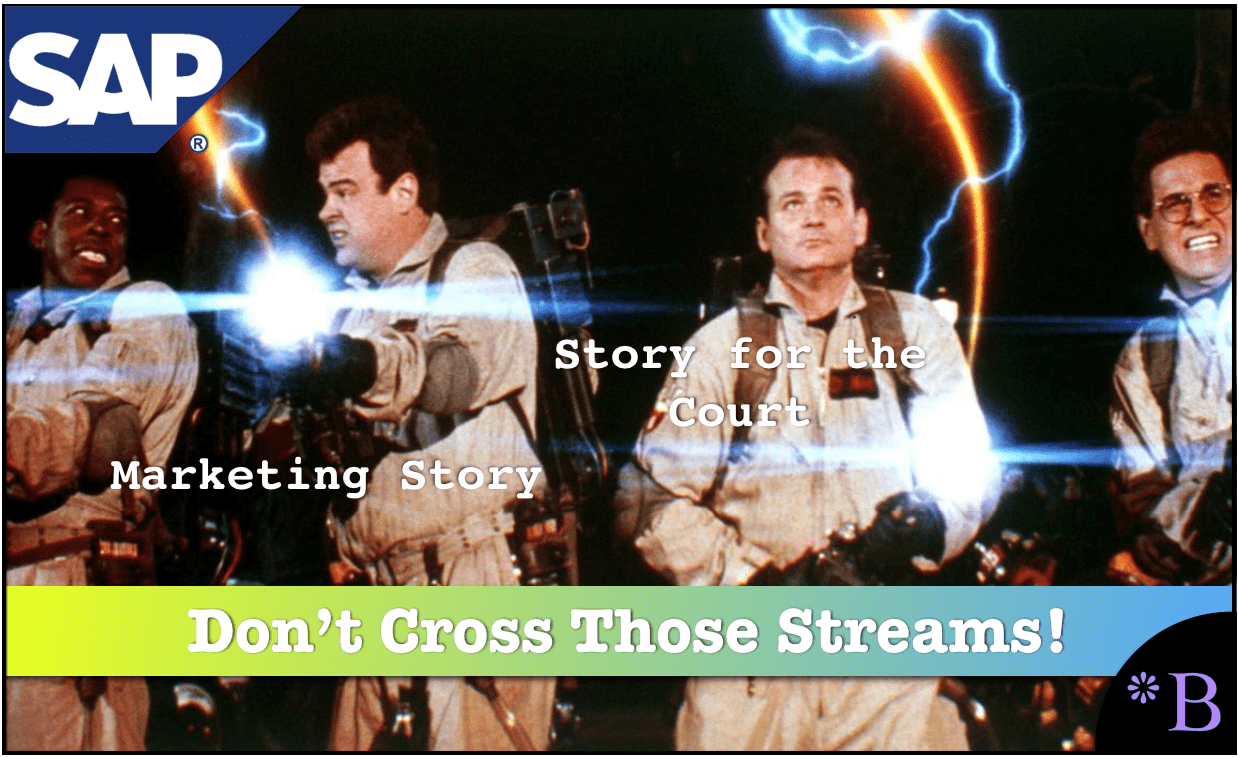 As anyone how saw Ghostbusters knows, you never cross the streams. Customers who bought HANA or plan to buy HANA should not “worry their pretty little head” about what SAP is now saying in its court case against Teradata. They should rely on PwC or Infosys to explain all of it to them.

This is much like the ZL Technologies case against Gartner, where Gartner said they could not be sued because their output was just “opinion,” as we cover in the article How to Best Understand Gartner’s Ombudsman.

Currently, of the database base/data warehouse vendors, only Teradata is suing SAP. However, other database vendors were the victims of the same false claims made by SAP about HANA. The more the lawsuit persists, the more information becomes available for other companies that SAP used incorrect information to market against. While the case has not gotten to this part of the Teradata complaint yet, SAP used the same anticompetitive tactics to block out of accounts as we cover in the article, HANA Used to Block Out Other Databases. We documented this behavior of SAP on customers from multiple sources before Teradata ever filed their lawsuit.

Teradata is not the only database vendor with at least anti-trust claims against SAP for what they did with HANA. However, it should be noted that anti-trust complaints are now tried in court, as companies know that the FTC won’t do anything about enforcing the US laws on anti-trust. The current anti-trust status is that the US society allows the most egregious abuses of power by the giant entities. These same companies continue to tell us that they function in a “capitalist system” and compete in a free and open market.