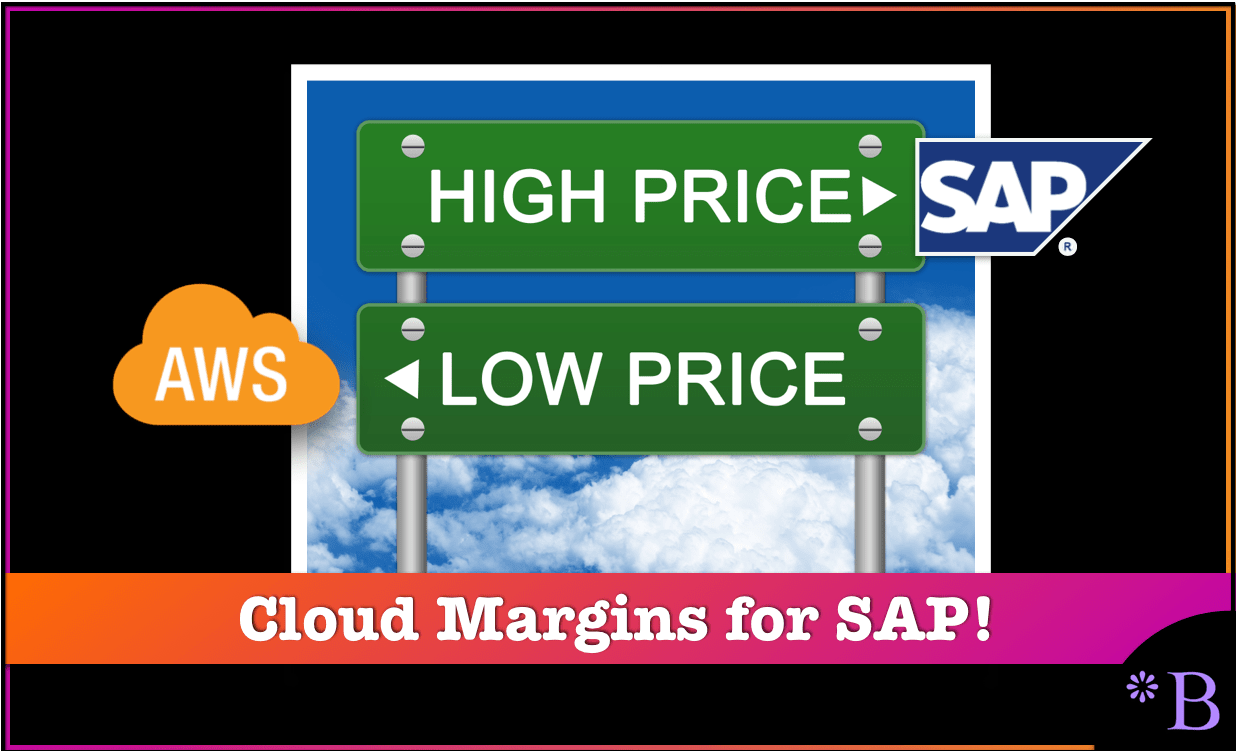 One of the most interesting developments in the public cloud is how the public cloud service providers like AWS or GCP or Azure will work with the on-premises vendors. Often things are presented by companies for political reasons rather than what is true. We found the following slides from a presentation by AWS. 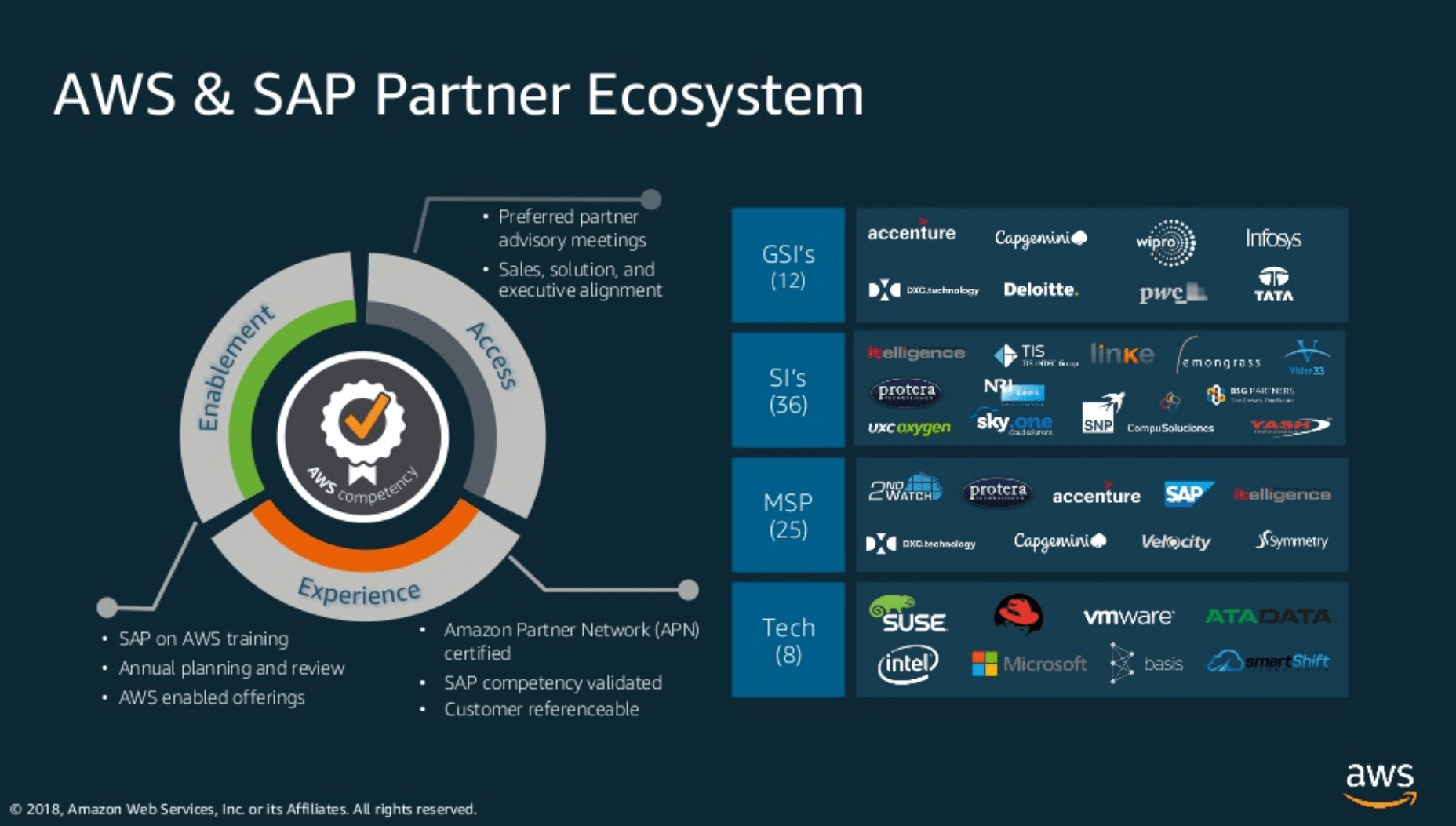 This slide from a presentation by AWS shows a very complementary relationship between AWS, SAP, and several partners. However, the reality is quite a bit different. Not only SAP but many of the partners on this slide intent to significantly intermediate between AWS and the final customer. 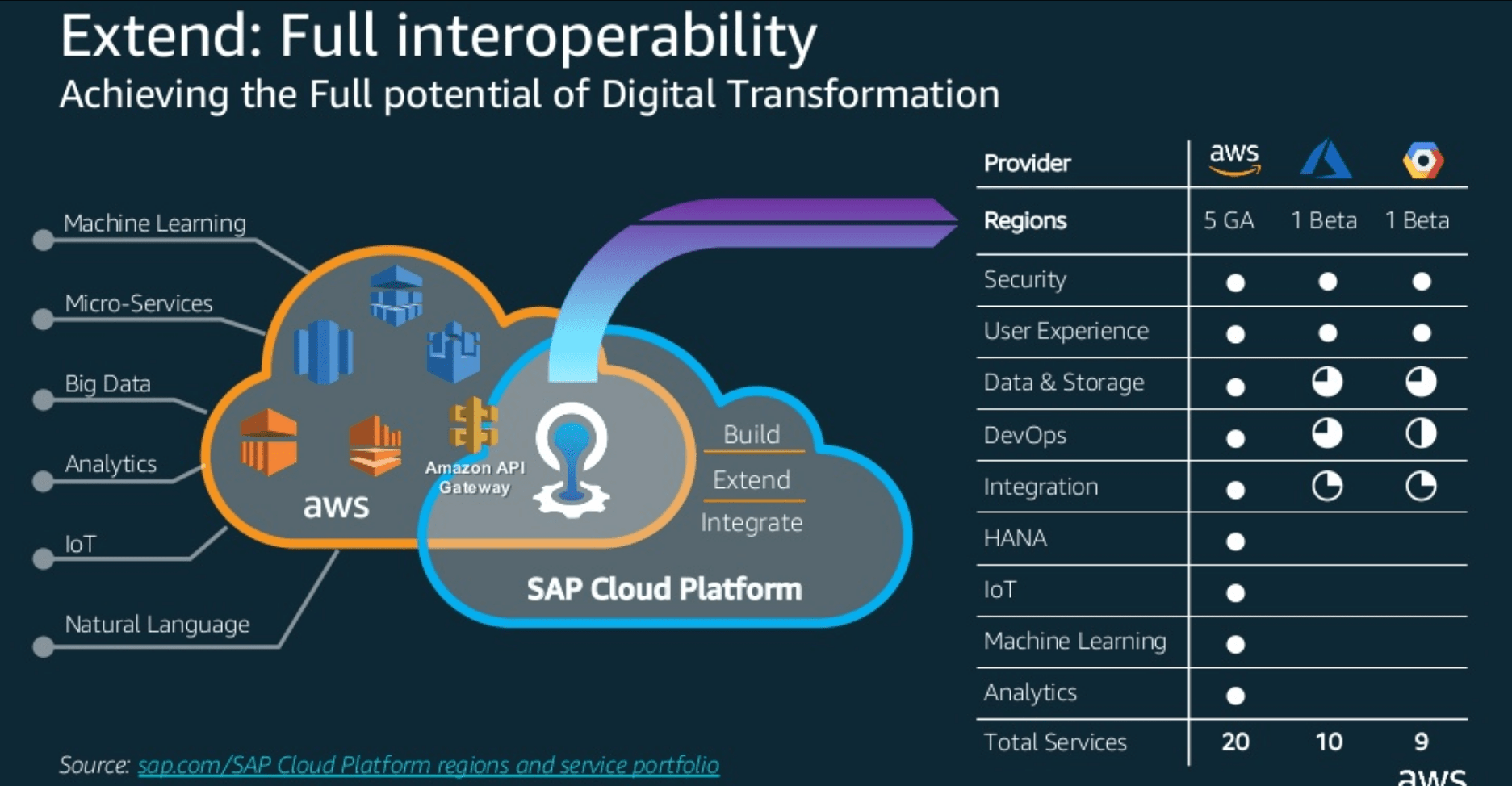 This slide (by AWS) shows what is feasible, but not necessarily what is desirable for customers. Under the scenario where the SAP Cloud is the origination, the prices are dramatically higher. The table to the right shows that AWS claims a far more complete offering than GCP or Azure.

How SAP Plans on Maintaining its Margins

All of SAP’s recommendations for cloud come with a markup over the cloud provider, which SAP does not discuss and pretends does not exist. Cloud service providers that seek to gain SAP business must tread very carefully around the topic of SAP’s markup on their services, as we covered in the article How to Understand SAP’s Upcharge as a Service Cloud. Repeatedly circumvented SAP to sell directly to SAP customers rather than giving them a markup, SAP will immediately disappear from SAP’s recommended providers listing. SAP will try to direct customers to cloud service providers that allow SAP to obtain their margin. This may be the primary strategy that SAP will use to increase their margins.

See this comment from the SAP Q3 2018 analyst call.

As customers choose to switch to cloud, vendors have to deal with shifting from the upfront cash earned in on-premises deals to the ongoing subscription costs associated with cloud services.

On the earnings calls, execs argued that, as cloud has more lifetime value and more predictable future revenues, the firm was going in the right direction in the long term.

Insisting that the core business was stable anyway, CEO Bill McDermott said they should be “celebrating with champagne… that the cloud is soaring”, adding that if cloud was flat with a “rock solid core”, analysts would be “worried about the future”.

CFO Luca Mucic said the firm would always trade a software dollar for a cloud dollar, and “will not artificially slow cloud growth to optimise our P&L in the short-term”.(emphasis added)

Under what scenario where the vendor cannot markup the cloud services of other companies, this explanation is not true?

How can we say this?

Where Do SAP’s Margins Come From?

SAP has around an 85% margin on support. This is by far their largest margin item and the only real part of SAP’s revenues that are growing. SAP’s margin on applications and database licenses is considerably lower. The quotation above leaves out the fact that for SAP’s internally developed products, SAP’s cloud is just a passthrough. The actual infrastructure and real work are performed in either a public cloud or private cloud service provider. SAP spends extremely little on its cloud infrastructure. The cloud can become a very profitable item for SAP — if SAP can trick companies into using SAP Cloud as an intermediary rather than going direct to the cloud service provider.  The way to do this is to hide the margin from the customer. However, with the public cloud, this is tricky as the pricing is public.

See this pricing estimate. SAP wants to mark this cost up by a factor of between 3 to 10 times. SAP wants to be paid for this solely for “originating the deal.” This is the only way that SAP can grow its revenues from the cloud. The SaaS applications that SAP purchases have a low margin, and several years after being acquired, the applications begin to decline in the marketplace. Cloud markup is where SAP’s financial future is.

SAP has a long history of marking things up that they do not put work into developing. Databases are an excellent example of this. For decades SAP has been marking up the Oracle database and IBM DB2. Customers could have received a lower price by going through those vendors directly. Still, both vendors allowed SAP to serve as a reseller of their databases, which resulted in significant profits for SAP, and higher costs for SAP customers.

SAP can worry less about the margin on its applications and databases if they can merely markup the cost of other cloud service providers. This will be easier with “private cloud” providers because the pricing is hidden. However, for this strategy to work, the private cloud providers must cooperate with SAP, and refer customers back to SAP rather than provide a direct bid. As soon as the customer finds out the real cost, SAP will lose its position as intermediaries. To do this, SAP will have to enforce stringent rules for how private cloud providers communicate costs.

At the time of publication, this is still a “story.” That is in the IT media and on calls with Wall Street analysts, the question is not asked for SAP where these margins are coming from. That is, it is not very much discussed that SAP’s’s strategy outside of its SaaS acquisitions is to markup the offering of other cloud service providers. In the quotation from Luca Mucic above,

“always trade a software dollar for a cloud dollar,”

..the fact that the software dollar that is being traded will in many cases not be for an SAP SaaS/cloud application, but a dollar of revenue that SAP plans to markup by 3 to 10 times over AWS/GCP/Azure/HPE/IBM/etc. Under that scenario, SAP could have the highest cloud margins in enterprise software, while doing the least actual cloud “work.”