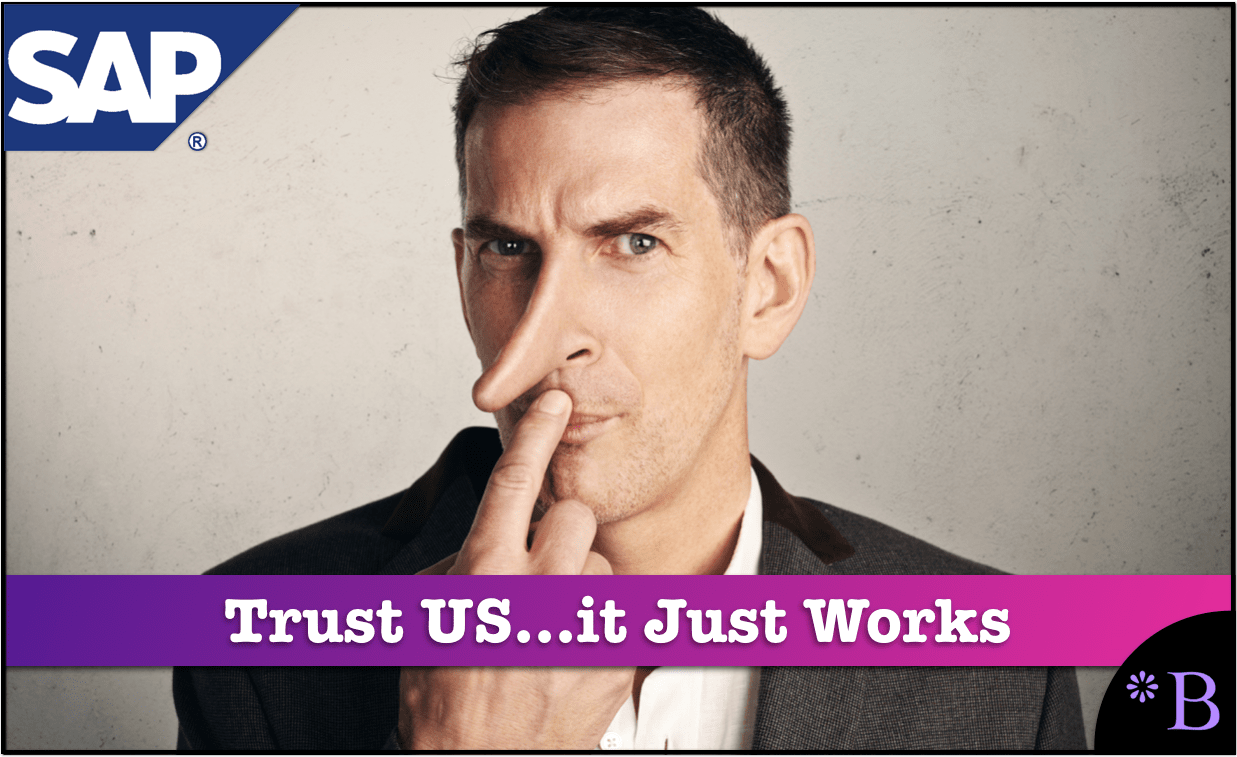 SAP resources sometimes get quite incensed by the research we do here at Brightwork. We analyze the quotes from one such SAP resource.

Tell Customers They Are Not Following SAP “Best Practices”

Tell Customers That All of Their Problems are Unique

A second argument used by SAP and their consulting partners is by telling you that all other customers are happy with the software. I have often arrived on SAP projects trying to recover an SAP module, and I am surprised to find that that client is never informed that all other clients that use the same functionality have similar problems. One example of this is how the SAP optimizer does not work, as I covered in the article The Problem with SNP Optimizer Flow Control. In the article Experiences with Dynamic or Extended Safety Stock. I will have often written articles 6 or 7 years before arriving at a client that calls out the SAP issue, and the client is still unaware of the issue because they are consistently misinformed by SAP and their consulting partners. At Brightwork, we continue to receive problems that come in from S/4HANA and HANA implementations and others. These problems are never published, and we have to be careful in publishing them as they must be anonymized, or they would get the source in trouble. One example of this is described in the article A HANA Performance and HANA on Azure Case Study.

The big illusion that SAP proposes is that customers that use SAP are very content. As a person who has been on SAP projects since the late 1990s, I can say this is not true. Executives who don’t have to deal with SAP or work on SAP are happy to have SAP on their resumes, but SAP customers are by, in large, not happy places. The best description of SAP clients is that they feel restricted by the system.

What is curious about this argument is that it is identical to VW’s argument for over a year to dispute the emission test results from the University of West Virginia. VW continually told them…

“your measurements are wrong”

“you don’t understand our technology.”

The Centrality of Gaslighting to SAP’s Strategy in Customer Management

This is called gaslighting. You attempt to get the receiver of the message to think they are crazy. This is such an essential part of SAP’s overall business strategy, and it’s necessary to delve into the definition.

“Gaslighting is a form of psychological manipulation in which a person seeks to sow seeds of doubt in a targeted individual or in members of a targeted group, making them question their own memory, perception, and sanity. Using persistent denial, misdirection, contradiction, and lying, gaslighting involves attempts to destabilize the victim and delegitimize the victim’s belief.[1][2]

Instances may range from the denial by an abuser that previous abusive incidents ever occurred to the staging of bizarre events by the abuser with the intention of disorienting the victim. The term originated from the 1938 Patrick Hamilton play Gaslight and its 1940 and 1944 film adaptations, in which the gas-fueled lights in a character’s home are dimmed when he turns the attic lights brighter while he searches the attic at night. He convinces his wife that she is imagining the change. The term has been used in clinical and research literature,[3][4] as well as in political commentary.” – Wikipedia

Psychology Today has the following quotes on how to identify a person who is gaslighting you.

“You know it’s an outright lie. Yet they are telling you this lie with a straight face. Why are they so blatant? Because they’re setting up a precedent. Once they tell you a huge lie, you’re not sure if anything they say is true. Keeping you unsteady and off-kilter is the goal.” – Psychology Today

SAP constantly lies. In fact, we rate SAP as our least honest vendor, as we cover in the article How to Understand the Honest Vendor Ratings – SAP.

“You know they said they would do something; you know you heard it. But they out and out deny it. It makes you start questioning your reality—maybe they never said that thing. And the more they do this, the more you question your reality and start accepting theirs.” – Psychology Today

We constantly playback false statements made by SAP to SAP resources, and they are swift to non-observe the statement or change the subject. SAP resources will call out senior executives, particularly in public.

“Gaslighters know that people like having a sense of stability and normalcy. Their goal is to uproot this and make you constantly question everything. And humans’ natural tendency is to look to the person or entity that will help you feel more stable—and that happens to be the gaslighter. ” – Psychology Today

SAP has been lying since its inception as a company, and we have tracked their accuracy over the past ten years in the article A Study into SAP’s Accuracy. However, this inaccuracy does not seem to be observed by customers to use in interpreting SAP’s proposals.

A perfect example of this was found in a recent comment from an SAP consultant around something called the sap optimizer. SAP consultants, like this one, tell their clients that the problem lies not with the optimizer but lies with the business. This position is held even though I have yet come across an instance where the optimizer worked. I have troubleshot clients where the company was blamed for the optimizer issues. Years after I left the project (often with many of my recommendations ignored), the client still tried to get the optimizer to work.

Here is a direct quotation.

I worked on using SNP optimizer. The main problem was not the tool or the maths within ILOG algorithms. The real problem was getting business to understand optimisation. With optimization, 2+ 2 can be 4 but also 3,8 or 4,2 . If you are lucky you have business familiar with operational research concept most still in the MRP mindset. The business also have difficulty merging granularity: medium term planning to operational planning” – Pino Villa

And this is the problem generally with SAP consultants because they are not reliable as to why SAP does not work as it should work. In the article SAP Platinum Consultants and Objectivity on Difficult Issues with SAP, we covered the most experienced consultants that work for SAP. However, there they do not have the authority to tell the customer the truth.

It is exceedingly difficult to find SAP consultants that will tell you anything but the standard SAP marketing and sales position.

Background on Requirements That Were Unaddressed During the SAP Sales Process

By that time, the company has made the investment and then must customize the software to make it work. If SAP is the active at the implementing company (rather than letting a consulting company take most of the work) SAP will fight aggressively to hide this fact as long as possible. I have been pressured several times by SAP to help them cover up for the mistakes of their salespeople. At one company, I was asked to “get creative” in cobbling together “standard” SAP functionality in a way that would somehow meet the business requirement – a requirement that SAP’s software could simply not meet. Another tactic they will use is to state that the requirement is not legitimate because all SAP functionality is based upon best practices; so therefore, the requirement is not a best practice. I have demonstrated that this is just a political tactic and has no validity. More on this can be found in the following article.

However, there is more to this story that I am placing in the book. However, I think it is tangential to the narrative, so I am publishing this perspective here instead of in the book.

The Story From SAP

The next question is, what can companies that encounter this issue expect from SAP. After intimately experiencing this process several times, I can say that SAP’s response will be fairly consistent. Here are the steps that SAP account management will employ:

The Company Response to SAP

Bullets 1 and 3 are standard SAP spin and can be dismissed out of hand. They say the same thing (Just like every SAP salesperson now proposes that they will turn the implementation with the client into a “showcase” or the well-worn line that the client will get only SAP’s top resources. See this article because all of the consulting companies make the same promise during the sales process).

As for bullet 2, the company being promised this by SAP must monitor this commitment very carefully. I say this because SAP made this same promise to one of my clients, and I never saw anything come back from SAP development. Instead, the clients on-site (me being one of them) were tasked with being “creative” and coming up with some solution using the standard functionality. I analyzed the requirement and determined in around 15 minutes that SNP did not contain this functionality. However, we were made to spend many hours — all billed to the client — to develop a design employing standard functionality. This is three consultants working and billing the client — to cover up a mistake made by SAP sales. What did the client get after all of this billing?

Not much. I eventually worked with my client counterpart to develop a custom design that leveraged no SAP functionality that would have been a freestanding application. I could have done this right off the bat without myself or other consultants billing any hours to follow up a dead end, but this would not have satisfied SAP’s political needs.

The internal communication to be my SAP was completely cynical. We were told on several occasions that the solution we developed did not have to work, it just had to be “a solution” so that SAP could say that they offered a solution, but the client had not accepted it. This would have removed any obligation on the part of SAP to cover part of the custom development, so it was all they were after.

Looking for Independent Views on SAP?

One may search, but SAP remotely controls nearly all of the information sources on SAP. Please review the following providers of information to see their dependence or independence from SAP.

As the least honest vendor in our ratings (the second being Oracle), SAP has continual large discrepancies between what SAP is sold to do and what SAP can actually do. To bridge this gap, SAP uses several techniques and arguments that pivot the topic away from SAP’s misrepresentations of its software. It is 100% supported in this behavior through a compliant consulting ecosystem with the same financial incentives to prevent the customer from using the evidence in front of them that they have been misled.