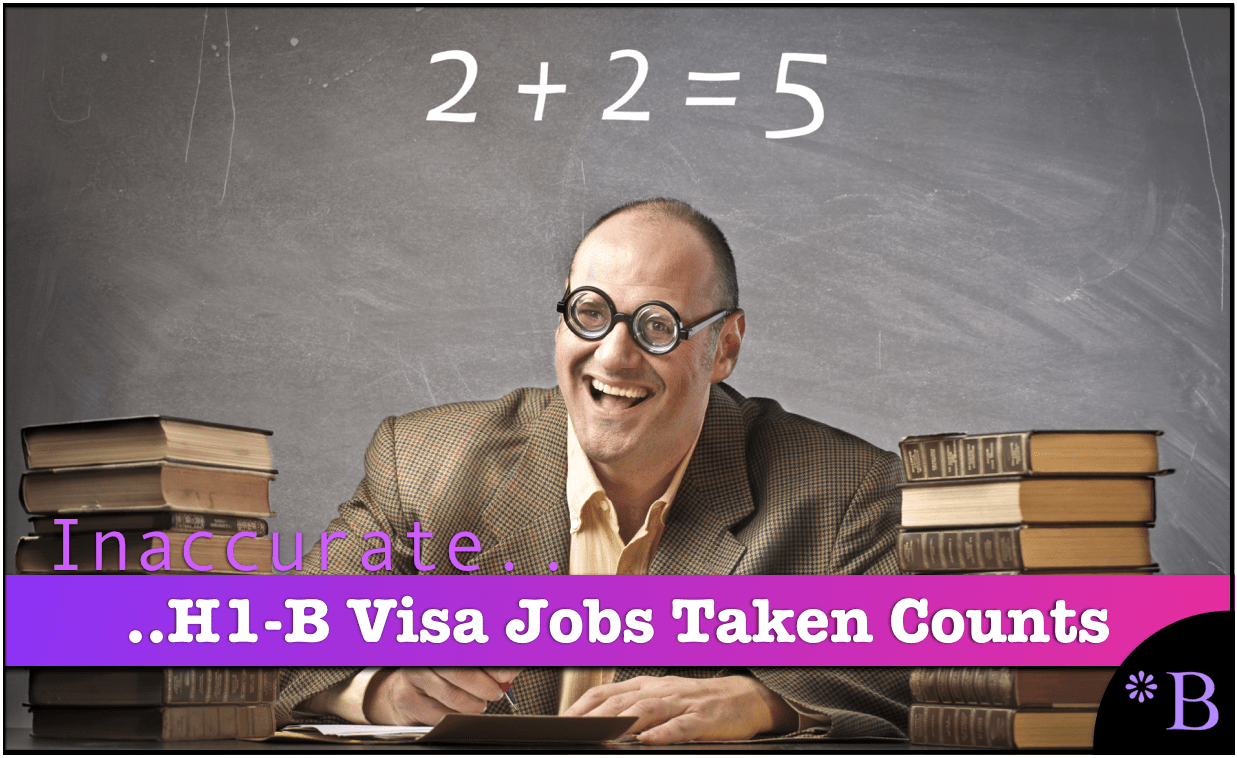 It is widespread for media coverage to entirely understate the number of people flowing into the US under the H1-B program.

The Commonly Stated Number of H1-Bs

Notice this quotation from Wikipedia

The Immigration Act of 1990 established a limit of 65,000 foreign nationals who may be issued a visa or otherwise provided H-1B status each fiscal year; the annual limit is often called a quota or a cap. An additional 20,000 H-1Bs are available to foreign nationals holding a master’s or higher degree from U.S. universities. In addition, excluded from the ceiling are all H-1B non-immigrants who work at (but not necessarily for) universities, non-profit research facilities associated with universities, and government research facilities.

The media reports typically that 65,000 H1-B visas are awarded per year. However, this leaves out the 20,000 that are awarded to students in US universities that obtain either a master degree or PhD. Universities have a special incentive to allow students from India in to achieve theirs out of state tuition. Most Indians that study in the US then apply for the H1-B visa after graduation. In this way, the acceptance into a US university becomes a potential ticket to citizenship. However, this increases the number of H1-B visas to 85,000 per year, not 65,000 per year.

There are far more people studying in the US that want H1-B visas than the 20,000 number, as the following quotation explains.

Those who have the U.S. master’s exemption have two chances to be selected in the lottery: first, a lottery is held to award the 20,000 visas available to master’s degree holders, and those not selected are then entered in the regular lottery for the other 65,000 visas. – Wikipedia

Trying to get a handle on the actual number of H1-B and related job dislocation gets extremely weird, as this quotation explains.

The quota was increased to 195,000 H-1B visas in fiscal years 2001, 2002, and 2003 only. Nonprofit research institutions sponsoring workers for H-1B visas became exempt from the H-1B visa quotas. – Wikipedia

However, it gets worse than this. The reason is that the cap is essentially an imaginary number in any case. See the following quotation.

When the H-1B category was enacted in 1990, Congress established that a maximum of 65,000 H1B visas may be issued to aliens during each fiscal year. This limitation, commonly referred to as the “H1B cap,” does not apply to H-1B petitions filed on behalf of aliens who have been counted against the cap in the previous six years and who have not been outside of the United States for one year or longer.(emphasis added) – Characteristics of Specialty Occupation Workers (H-1B): Fiscal Year 2004

This means that there is a backlog of H1-B visas that are to be approved each year. This pushes the number far above the published cap.

Thus, generally, petitions to extend an H-1B nonimmigrant’s period of stay, change the conditions of the H-1B nonimmigrant’s current employment, or request new H-1B employment filed on behalf of H-1B workers already in the United States will not count against the H-1B fiscal year cap. – Characteristics of Specialty Occupation Workers (H-1B): Fiscal Year 2004

This ridiculous logic is how we end up with the following. 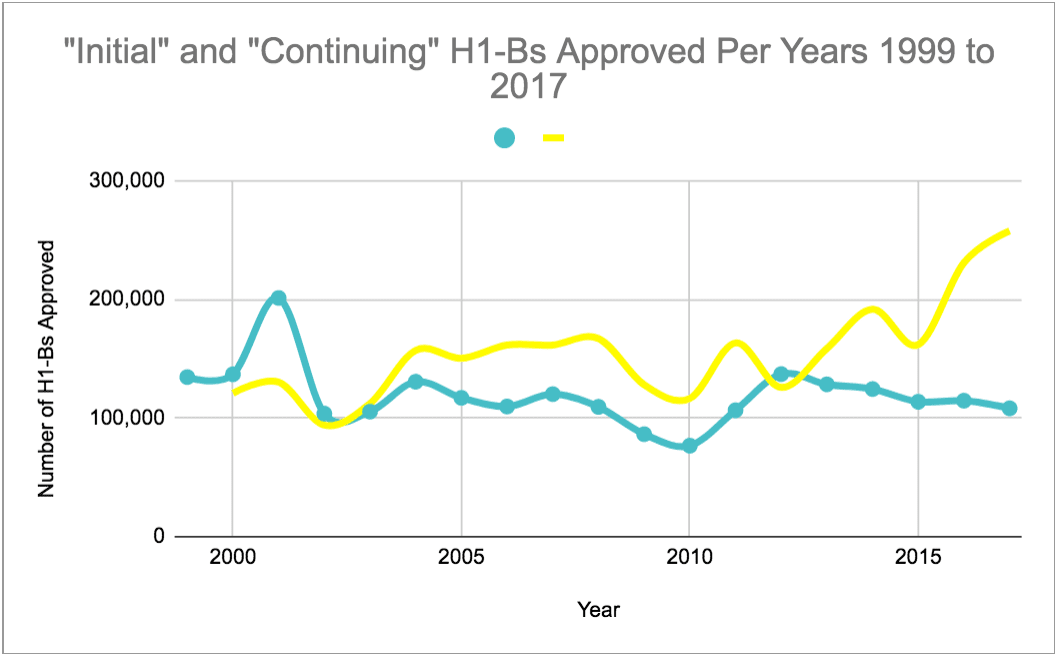 From 1999 to 2017 (from Wikipedia) each year, the number of H1-Bs approved for entry massively exceeded the officially published number (often seen in media entities) of 85,000 per year. The H1-Bs are approved in two different categories. One is the “initial” application. The second is “continuing.”

These two categories have to be added together to arrive at the total, which is shown below. 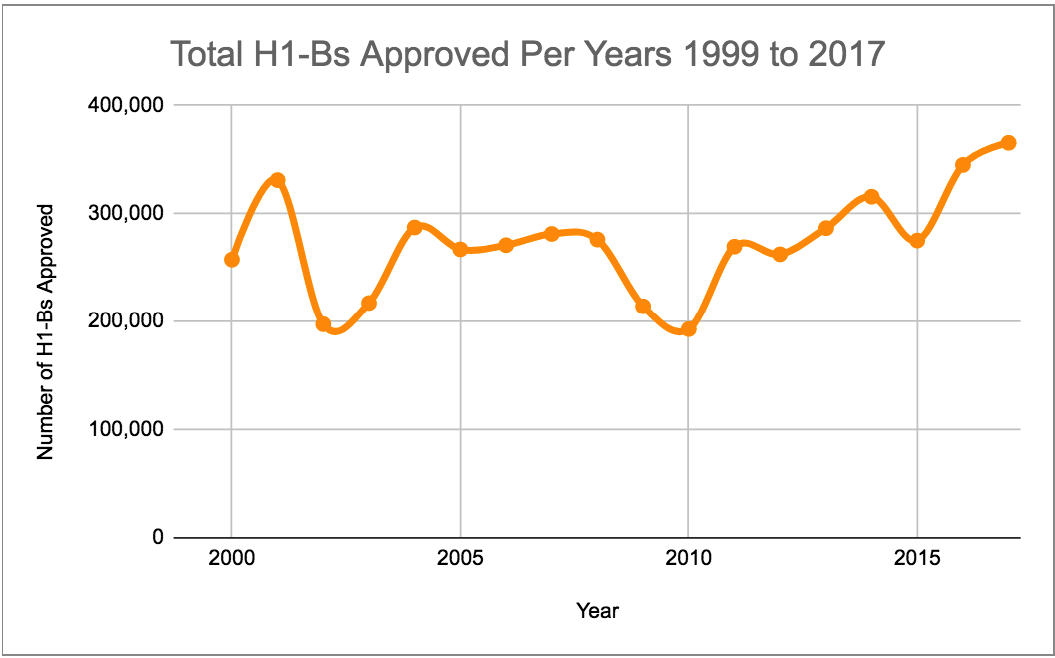 And each H1-B brings in more non-domestic US labor than just the H1-B visa holder, which gets right into this next topic.

How Many H1-B Related Work Visas Per Year?

Each H1-B recipient is allowed to bring in family members, which includes spouses under an H4 visa. Having been around H1-B visa holders, it is rare for an H1-B visa holder not to bring over a wife within a year. Any H1-B holder is an extremely marketable commodity, a spouse back in India, for (typically women) who again, want to get out of India. However, eventually, many of the H4 visa holders end up working. This is true even though they never fell into the H1-B program and have not provided any evidence that they have any special skills. Instead, they were selected by the H1-B holder.

Stated in US Government Documents

Notice this acknowledgment in the following government document.

Even though the annual H-1B cap is 65,000, the actual number of foreign workers coming in through the program is much more because of numerous exemptions. For example, in Fiscal Year 2014, the agency in charge approved 315,857 H-1B petitions. – Immigration Reforms Needed to Protect Skilled American Workers

The Story Gets Even Worse With L-1 Visas

The IT media focuses and relays only the H1-B visa program. However, the H1-B program is not the only foreign worker program, and each of these different visa programs increases every year. This is covered in the following quotation.

It Gets Worse Still With the OPT Visa

Virtually undiscussed in the IT media is the OPT student visa program. This is another highly abused program that leads to workers being added to the US to compete with domestic US citizens. This program is virtually “off the grid,” and we only began to understand it and its shocking size when we started researching the H1-B issue. 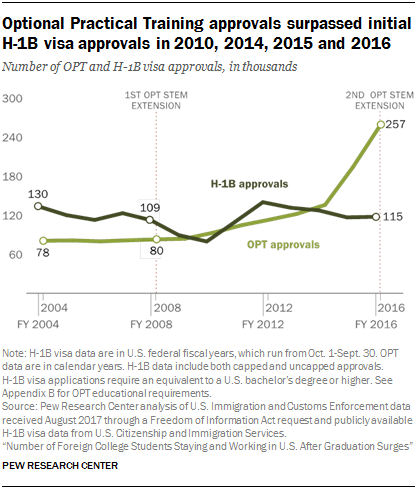 The graphic above is not correct from the H1-B approvals because they appear only to count the initial approvals — as we have covered already. However, the OPT visas are still over 100,000 individuals every year, with a peak of 257,000 in 2016.

How can such a massive program have such a small signature? The OPT (Optional Practical Training) program is designed to get students to work experience — why is a mystery, as they are in the country on student visas. And now, multinationals are hiring these visa holders, as we cover in the article How IBM Advertised for OPT Student Visa Holders for Low Paid Jobs.

Notice there is no need for companies or lobbyists to lobby to increase the OPT visa cap — because there is no cap, as is explained in the following quotation.

Also, unlike the H-1B visa program, which imposes an annual cap of 65,000 visas to private companies sponsoring foreign workers9, there is no cap on the number of approvals available under the OPT program; all F-1 visa holders are eligible to apply. – Pew Research

John Miano, a fellow at the Center for Immigration Studies, called the 2008 STEM extension a “scheme” by Microsoft to “circumvent the H-1B quotas.” The program started out giving work-experience opportunities to foreign students but has since been “transformed into a full-blown guestworker program whose stated purpose is to provide labor to American business,” Miano wrote in a September blog post for the center. – Mercury News

One commenter on the Mercury News article described the OPT program as follows:

We can thank the great Obama for screwing the US citizens by extending the opt from 12 months to 3 years. OPT is just another back door to get more cheap labor into US. OPT stands for optional practical training, the idea is you get practical experience for the program of study. But it is being abused and our lawmakers and administration are not closing those loopholes. for example, a person graduating with civil engineering degree should not be working in an IT company, how is that getting training in his field of study? but nobody is stopping them from doing it. Small IT body shops routinely go to universities and get desperate foreign students who doesn’t want to leave US to work as IT contractors. These students are paid a 1000 to 4000 a month while the IT body shops peddle them to companies with fake resumes showing 5 years of experience. These small IT body shops\staffing companies pay experienced people 500$ to 1000$ to take proxy interviews and provide them on the job support while these foreign students just show up and sit in front of computer. Will any US citizen be willing to work for 1000 to 4000$ per month?

The OPT Visa Holders are “Students” But Don’t Need to be Enrolled in School?

The functions of the INS shifted the newly created Department of Homeland Security in 2002. One of the post 9/11 department’s first regulations allowed aliens to work on OPT without being enrolled in school. – Sold Out

Why would this be changed, except to allow people to work when they are not students? Also, what does this have to do with 9/11? OPT visa holders can now work for three years on the OPT visa!

The H1-B lobby is continually complaining about how they don’t have enough foreign workers and are taking a jackhammer to the visa programs to enlarge them. At the same time, fraud grows every year in each of the programs as we cover in the article After H1-B, The L-1 Visa Program is the Next Worker Immigration Program to be Scammed. We also showed the number of companies behind the H.R.1044 expansion of the percentage of the H1-B program that is consumed by Indians in the article Why Are 47 Entities Lobbying in Favor of the H.R.1044 IT Immigration Bill?

To put the Gang of Eight’s unweildy new quota change in perspective, take a look at how the cap has morphed over time. When the law’s limit was first created in 1991, it specified that thet total number of aliens to be issued H1-B visas during any fiscal year “may not exceed 65,000.” After twenty three years of amendments, the loopholes have proliferated like bunnies on Viagra.

It would have been easier — and a hell of a lot more honest — to just remove the H1-B quotas altogether. That is what this part of the bill effectively did, anyway. The so called market based cap would have been tied to “market” forces other than the bottomless demand for H1-B visas. The sole purpose of all this legislative diarrhea was to increase the cap when the cap was reached. Consistent with the rest of the bill, the authors felt a need to lard up the package with unwieldy language to conceal its true goals. Now you know why the bill was 1,198 pages long. – Sold Out

The official reporting on the number of jobs taken from US domestic workers by H1-B visa holders is highly understated. For several years, the H1-B caps are increased by a factor of at least 2x. For one, there an extra 20,000 H1-Bs issued to students. Second, H1-B visa holders in virtually all cases bring in spouses, a high percentage of which also work, and therefore displace US domestic workers. Thirdly, the H1-B program is only one of many foreign worker visa programs. These multiple programs are combining to flood the US labor market, and the programs increase in size virtually every year. 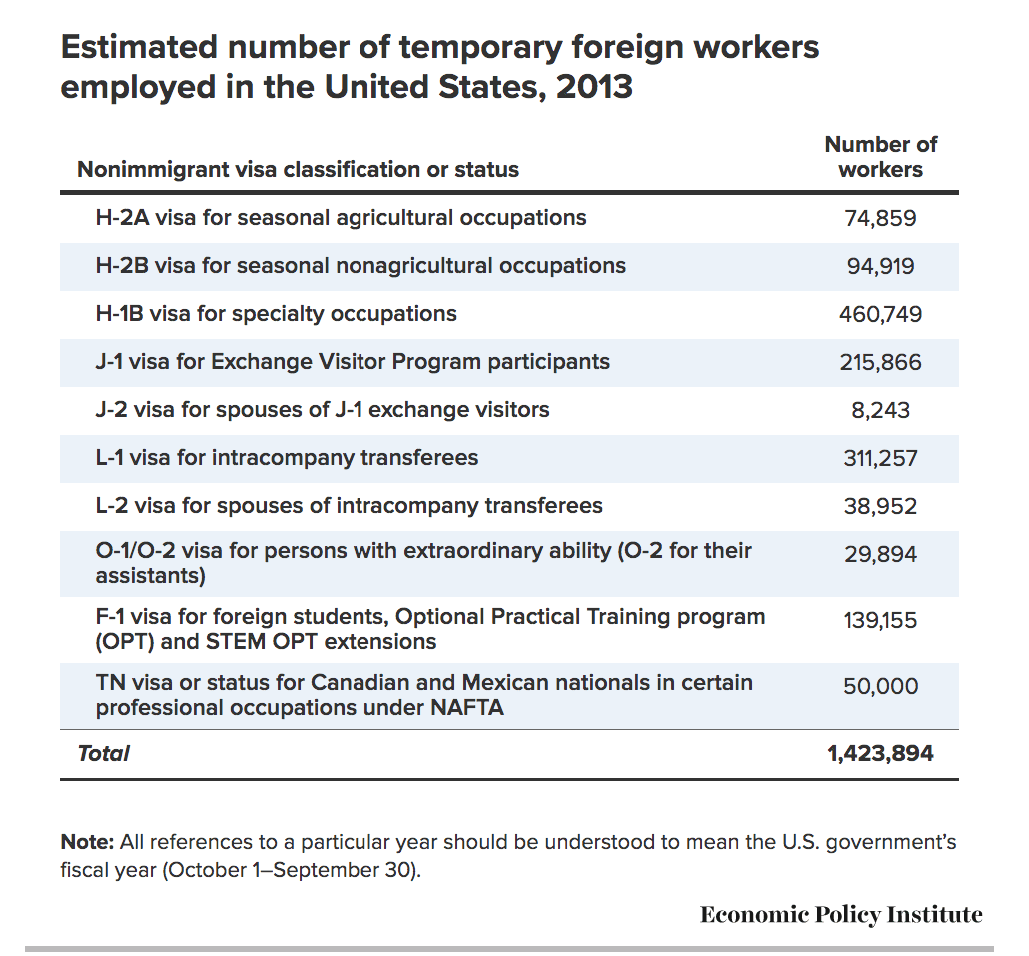 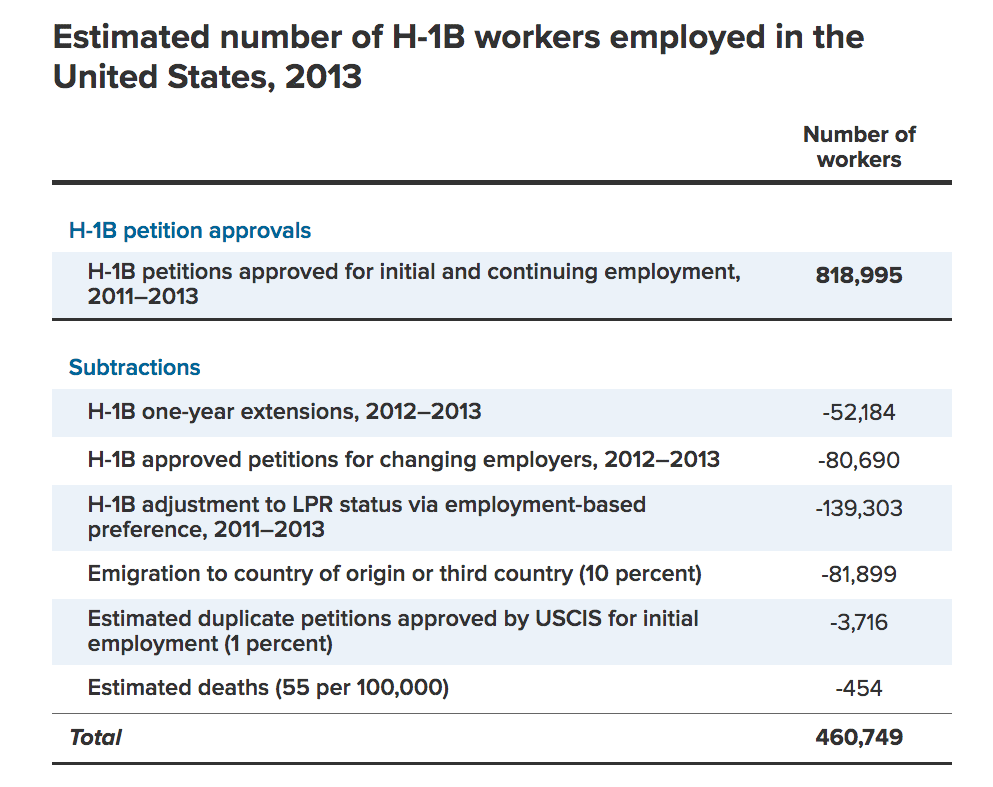