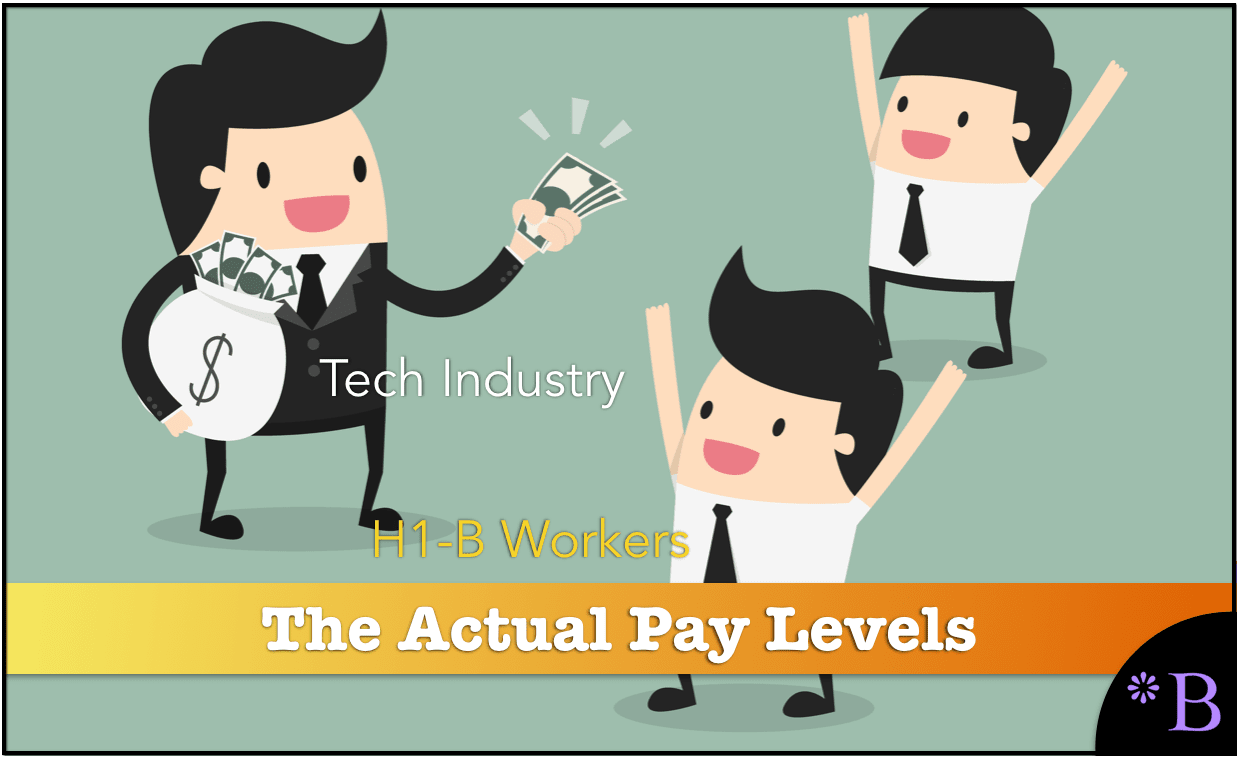 It is crucial to consider the pay of H1-B visa holders when testing the claims of H1-B visa lobbyists that the skills of the workers that are brought in under this program are unique.

Evidence for this is in the following quotation.

Clearly, the nation benefits by bringing in “the best and the brightest” high-tech workers worldwide.195 However, contrary to the claims of industry lobbyists that the H-1Bs tend to be “the best and the brightest,” workers of extraordinary talent comprise only a small fraction of the overall population of H-1B workers in computer-related fields. One can see this directly by considering H-1B salaries, say for 1999–2000.196 The INS gives data separately for two H-1B subgroups, those who are first-time recipients and those who are renewing their visa. The latter group is paid more, so let us give the industry the benefit of the doubt here by using this group as our basis. The 25th, 50th and 75th percentile salary levels for computerrelated H-1Bs were $44,000, $50,000 and $57,000, respectively.197 Fitting a normal distribution to this, we find that 99 percent of computer-related H-1Bs made less than about $79,400. This is far below the $100,000 or more that “genius” workers in the computer field make; even the 90th percentile, arguably not “genius” level, for salaries for software applications engineers in 2001 was $109,170.198 – University of Michigan Journal of Law Reform

We had to read through the University of Michigan Journal of Law Reform to find this information. However, how many people will do this when confronted by false claims made by industry lobbyists who are paid to tell any lie they need to to allow their funders to access more cheap labor?

What is Skill Level of These “Best and Brightest” H1-Bs?

The workers brought in under the H1-B program, by in large do not match the claims made about them by the H1-B lobby.

The GAO found that more than half of H1-B workers with approved LCAs between June 2009 and July 2010 were categorized as Level 1 workers. These H1-B workers are in the US earnings bargain basement wages to perform “routine tasks” that require only “limited judgement.” Meanwhile, employers braying about losing the world’s “best and brightest” laugh all the way to the bank.

Professor Ron Hira told Congress about one large offshoring firm that hired H1-B visa holding computer programmers at $12.25 an hour. “That’s hardly the best and the brightest,” he bluntly testified. The end result, as Lofgren admits, is depressed American workers’ wages. – Sold Out

Why do 1/2 of the H1-B visas fall into the least skilled and least experienced category? The H1-B program was initially intended to apply to the most distinguished overseas workers.

The Problem with Indian Engineers

The latest Annual Employability Survey 2019 (external link) report released by Aspiring Minds reveals that “80 per cent Indian engineers are not fit for any job in the knowledge economy.”

The findings are based on data collected from 1,70,000 students from across 750 plus colleges in India.

For the first time, the employability report includes comparative data with inputs from engineers in the US and China.

“Good coding skills are possessed by 4.6 per cent of Indian job applicants.”

It says that Indian engineers (4.6 per cent) can code correctly compared to their Chinese counterparts (2.1 per cent) but lag behind American peers (18.8 per cent) who can write codes correctly.

The annual report also identifies some of the reasons why there is a skill gap.

“Sixty percent of faculty do not discuss how engineering concepts apply to industry. Only 47 per cent of students report the opportunity to attend a talk by industry personnel during their college career. Most talks that students attend are intra-departmental, rather than seminars, workshops, conferences or webinars that typically feature outside experts and scholars who present complementary or alternative perspectives.” – Kashmir Monitor

India has a massive issue with degree and credential falsification. See the following video.

The data in this report show the top 30 H-1B employers are in fact hiring H-1B workers to fill a very large number of routine (Levels 1 and 2) positions that require relatively little experience and ordinary skills.

Sixty percent of H-1B positions certified by the U.S. Department of Labor are assigned wage levels well below the local median wage for the occupation. While H-1B program rules allow this, DOL has the authority to change it—but hasn’t.

As with other fact-checking of claims made by H1-B lobbyists, this claim does not turn out to be true.