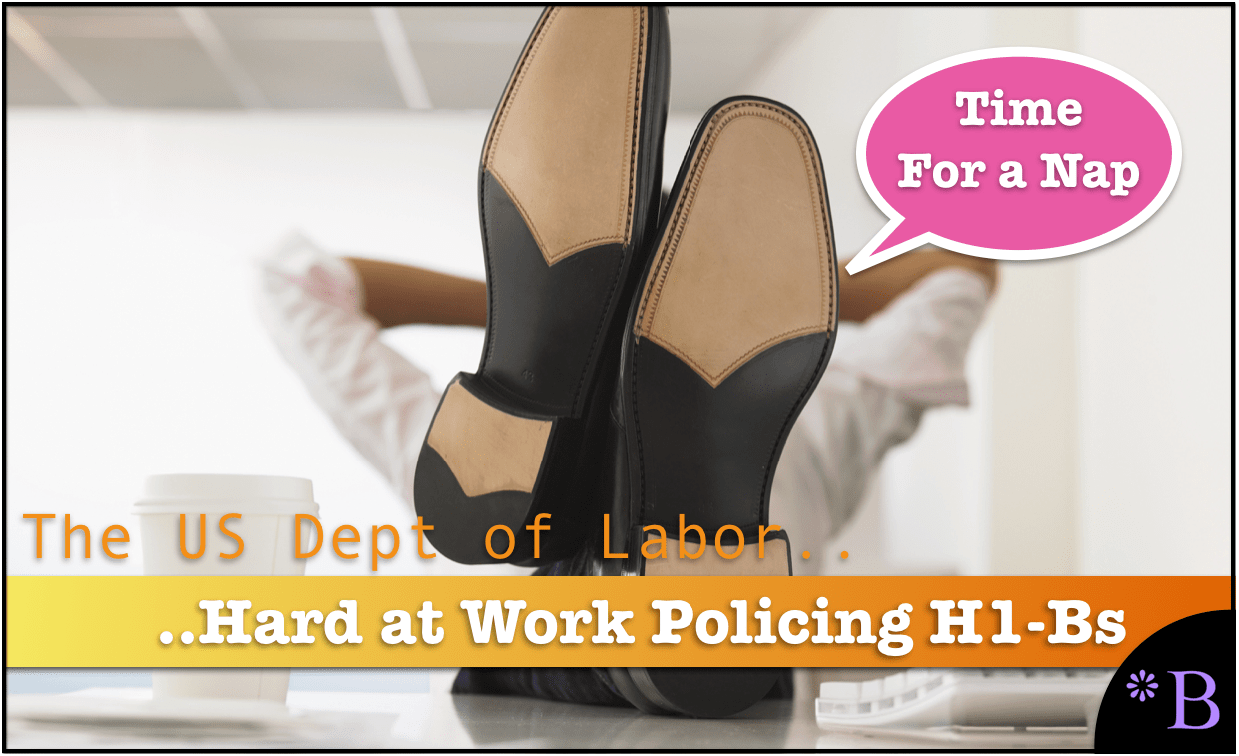 The US Department of Labor has been tasked with regulating the H1-B program, as is explained in the following quotation.

The U.S. Department of Labor (DOL) is responsible for ensuring that foreign workers do not displace or adversely affect wages or working conditions of U.S. workers. For every H-1B petition filed with the USCIS, there must be included a Labor Condition Application (LCA) (not to be confused with the labor certification), certified by the U.S. Department of Labor. The LCA is designed to ensure that the wage offered to the non-immigrant worker meets or exceeds the “prevailing wage” in the area of employment. – Wikipedia

However, the evidence around their actual work fulfilling their responsibilities regarding the H1-B program is clear through how many LCAs they reject.

The law specifically restricts the Department of Labor’s approval process of LCAs to checking for “completeness and obvious inaccuracies.”[173] In FY 2005, only about 800 LCAs were rejected out of over 300,000 submitted. Hire Americans First has posted several hundred first hand accounts of individuals negatively impacted by the program.[158] -Wikipedia

The reason this number is so concerning is that it is known that firms like Tata Consulting Services, Infosys, and others are now “H1-B mills” and are bringing in many thousands of H1-B visa employees that do not meet the criteria of the H1-B program. The idea that the Department of Labor would only reject .0026 of the total number of LCAs shows that the Department of Labor is not doing the job.

If the Department of Labor does not have the resources or interest to regulate the LCAs, then it allows large scale H1-B fraud that results in US workers being displaced by H1-B workers that cannot meet the actual H1-B criteria. The Department of Labor’s dereliction of duty is hidden from the general public and never a topic of discussion in the IT media. In fact,the IT media does all that it can to obscure how the H1-B program works.

The LCA is the H-1B program’s primary mechanism to ensure employer accountability, by requiring employers to promise they will comply with H-1B visa rules and pay at least the prevailing wage that corresponds to a specific occupation in a geographic area. The LCA is intended to preserve the integrity of the labor market by safeguarding the wages and working conditions of U.S. workers and of migrant workers employed with H-1B visas.

DOL reviews individual LCAs and then either certifies or denies the requested positions. The review process is perfunctory, with “minimal human intervention,” according to a report from DOL’s own inspector general.7 Electronically submitted LCAs may be approved in a matter of minutes. To be approved, applications must only be “complete and free of obvious errors.”(emphasis added) The inspector general’s report labeled the DOL’s review of LCAs as simply a “rubber stamp” that “adds nothing substantial to the process.” – Economic Policy Institute

So the LCA is a rubber stamp and does nothing but look like a process step, which is in fact merely an automatic approval.

How Many H1-B Petitions are Approved?

In fiscal 2019, 968,538 H-1B positions were certified through LCAs. However, it is important to note that not all certified positions in LCAs go on to become approved USCIS petitions that ultimately allow employers to hire H-1B workers; every year there are many more positions certified by DOL than the ultimate number of H-1B petitions and work visas that are approved, because employers may decide not to use the certified positions from an LCA in a petition (application) for a worker, or the subsequent petition might be denied by USCIS, or the employer may not be allowed to petition because of the H-1B visa’s annual numerical limit.8

The total number of H-1B petitions approved for H-1B workers by USCIS in fiscal 2019 was 389,323, which includes approved petitions for both initial (new) and continuing employment. – Economic Policy Institute

The number of Indians working in the US has reached overwhelming levels, where it is now common for 1/2 of the IT department in companies to be Indian. Yet the statistics show an even greater demand for H1-B workers.

A Major Conclusion of the Economic Policy Institute Report

The new wage-level data presented in this report make clear that most companies that use the H-1B program—but especially the biggest users, by nature of the sheer volume of workers they employ—are exploiting a flawed H-1B prevailing wage rule to underpay their H-1B workers relative to market wage standards. These largest H-1B employers include not only outsourcing companies—whose abuses of the program have been well documented—but also major U.S. firms such as Microsoft, Amazon, and Google.

Passing Durbin and Grassley’s H-1B and L-1 Visa Reform Act is the easiest and simplest solution to ensure that migrant workers with H-1B visas are never paid below the market rate according to U.S. wage standards, and that the wages and working conditions of college-educated U.S. workers are not undermined. Future legislation can and should go further by permanently setting the lowest H-1B wage level at the 75th percentile of wages surveyed for an occupation in the local area. – Economic Policy Institute

No Matter How Eggregious The Displacement of US Workers, the Department of Labor Refuses to Act

The Department of Labor has an appalling track record of doing nothing to protect US domestic workers from displacement by H1-B visa workers.

In 2002, the U.S. government began an investigation into Sun Microsystems’ hiring practices after an ex-employee, Guy Santiglia, filed complaints with the U.S. Department of Justice and U.S. Department of Labor alleging that the Santa Clara firm discriminates against American citizens in favor of foreign workers on H-1B visas.

Santiglia accused the company of bias against U.S. citizens when it laid off 3,900 workers in late 2001 and at the same time applied for thousands of visas. In 2002, about 5 percent of Sun’s 39,000 employees had temporary work visas, he said.[175] In 2005, it was decided that Sun violated only minor requirements and that neither of these violations was substantial or willful. Thus, the judge only ordered Sun to change its posting practices.[176] -Wikipedia

How could these violations not be substantial or willful?

This continues with another famous case at Southern California Edison.

Last year, Southern California Edison began 540 technology layoffs while hiring two Indian outsourcing firms for much of the work. Three Americans who had lost jobs told Senate lawmakers that many of those being laid off had to teach immigrants to perform their functions. – New York Times

When Asked Why They Did Nothing

Asked why the Department of Labor refused to intervene when H1-B workers for India run Softech blew the whistle on its unlawful bonding and serial fraudulent practices, an official drily responded: “We need to be strategic with our resources.” – Sold Out

The DOL Under Trump

The DOL labor secretary under Trump is Eugene Scalia. Here is a statement he made on the H1-B program.

“There’s been concern for a long time that the wages at which H-1B workers are allowed to be brought into the country are too low and are undercutting US workers’ wages,” Scalia said in an interview. “That’s never acceptable, but totally intolerable when you’ve got millions of Americans still out of work because of the pandemic.” – Al Jazzera

If there is a concern, why is the DOL not doing anything but rubber stamping H1-B applications?

The answer is found in this quotation.

Some advocates of reforming the H-1B programme are also sceptical.

“If they really had prioritised this and cared about it, they would have done it months ago, if not years ago,” said Daniel Costa, director of immigration law and policy research at the left-leaning Economic Policy Institute. – Al Jazzera

The Office of Management and Budget performed an analysis of how the Department of Labor (what the quote refers to as “Labor”), and it appears that it cannot perform its duties as part of the program.

..as the program currently operates, the goals of preventing abuse of the program and providing efficient services to employers and workers are not being achieved. Limited by the law, Labor’s review of the LCA is perfunctory and adds little assurance that labor conditions employers attest to actually exist. Furthermore, the requirement that employers first file the LCA with Labor before filing the same information with INS represents an extra, time-consuming step that adds to H-1B processing time. Expanding Labor’s authority to question information on the LCA would provide additional assurance that labor conditions are being met; however, this would likely increase processing time substantially and the Congress has demonstrated its desire that this process be handled quickly by establishing a short time frame and limiting Labor’s review. If the Congress wants to retain the minimal review, it could consider eliminating altogether the separate filing of the LCA with Labor and assigning the LCA review solely to INS.

Because Labor cannot now independently verify whether labor conditions will be met, no current protections would be lost if INS were to subsume this process. Moreover, because INS reviews much of the information on the LCA as a part of its petition review, there would not be any additional resource needs for INS adjudicators to perform this function. Finally, eliminating one review step may also shorten the total approval time for H-1B workers, thereby increasing employers’ ability to get the workers they need in a timely manner.

And that the Department of Labor can do nothing.

It has no authority to subpoena records during an investigation to identify whether employers are complying with the law, and it cannot conduct a baseline survey to obtain a true understanding of employer compliance with the H-1B program.

And It Is Not Only The Department of Labor

During a slam dunk case of B-1 visa fraud perpetrated by Infosys, whistleblower Jack Palmer had difficulty in getting any of the following agencies to look at the evidence he had acquired.

Palmer filed an internal whistleblower complaint. It went nowhere. He turned to the State Department, Department of Homeland Security, Justice Department and Internal Revenue Services, among other agencies. Finally, his whistleblowing led to a federal criminal grand jury investigation.

Other inside Infosys employees had provided Palmer with information of illegal B-1 workers at Wal Mart, Goldman Sachs, American Express, and other customers. One employee provided Palmer a spreadsheet with a list of illegal B-1 workers at Johnson Controls, Inc, who were “working full time testing software code and writing scripts but were paid their salaries by Infosys depositing money into…cash card accounts without withholding or paying income tax.” – Sold Out

Therefore, even with apparent cut tax evasion, in addition to worker visa fraud, it took titanic effort on the part of Jack Palmer to get any US government body to even look into the matter.

The US Department of Labor is not interested in regulating the H1-B system, which means that the H1-B system is run entirely at the discretion of the multinational companies that apply for H1-B visas. There is no public oversight of the program. Indeed the program is routinely expanded without the expansion legislation being understandable except to those lobbyists that write the legislation as we cover in the article Why Are 47 Entities Lobbying in Favor of the H.R.1044 IT Immigration Bill.

The multinationals that have rigged the H1-B program and weaponized it against US domestic workers distribute a steady stream of lies about the need fo the H1-B program. These lies are faithfully carried out across financially biased media entities that have little ability to do anything but repeat talking points provided to them by corporations.