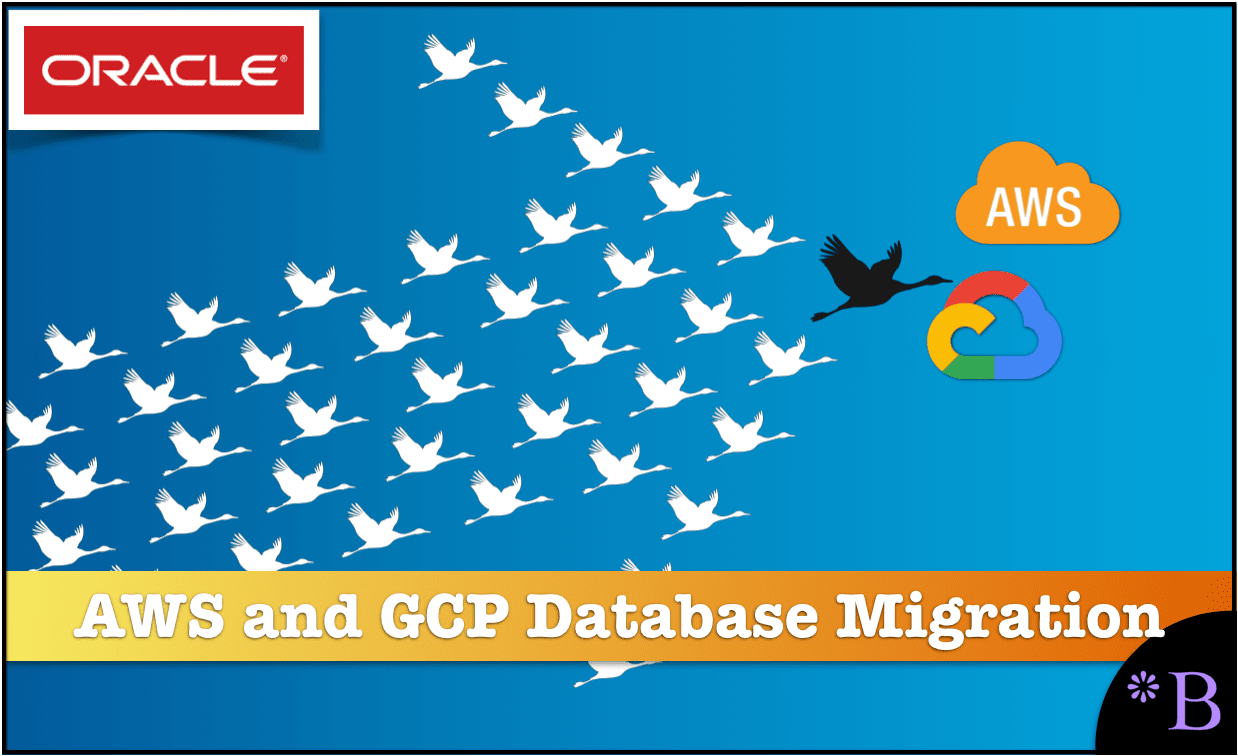 Migrating databases and applications to AWS or Google Cloud has numerous benefits that have already changed how IT is managed at a wide array of companies.

These benefits include the following:

The list of improvements is quite extensive. Amazon RDS manages the work involved in setting up a relational database. This is from provisioning the infrastructure capacity you request to installing the database software. Once your database is up and running, Amazon RDS automates everyday administrative tasks such as performing backups and patching the software that powers your database. With optional multi-availability zone deployments, Amazon RDS also manages synchronous data replication across Availability Zones with automatic failover. Using RDS is only one of the options for migrating an RDBMS to AWS. The other option is to use EC2.

AWS describes the advantages and disadvantages of EC2 vs. RDS thusly.

However, the RDS is a fully managed database, and it also provides significant economies of scale as AWS manages so many databases inside each RDS instance. But as AWS observes, RDS is not right for every usage, and universality of application is not the impression we intend to provide in this chapter.

On Innovation in AWS

On the topic of innovation, one thing that catches everyone off guard has been that AWS, in particular, has been and will be adding so many features and capabilities. A challenge with AWS is the rate of innovation is high-speed compared to most customers, so there’s a significant learning curve involved, and that learning curve keeps extending out to new things as soon as one “thing” is mastered. Many of us in technology have been told that we have to be dedicated to continual learning. However, AWS pushes the envelope of what is possible for a company to absorb.

As observed by AWS in their AWS Migration Whitepaper, the best way to migrate is incremental. A significant reason for this is simply the learning curve to figure out AWS and how to best leverage the AWS services.

Getting Started with Backups

One easy way to get started with AWS or Google Cloud is backing up data to either one. Every company needs a remote backup to get the process started and begin scaling up in familiarity. AWS explains this in the following quotation.

“Organizations are looking for ways to reduce their physical data center infrastructure. A great way to start is by moving secondary or tertiary workloads, such as long-term file retention and backup and recovery operations, to the cloud. Also, organizations want to take advantage of the elasticity of cloud architectures and features to access and use their data in new on-demand ways that a traditional data center infrastructure can’t support.” 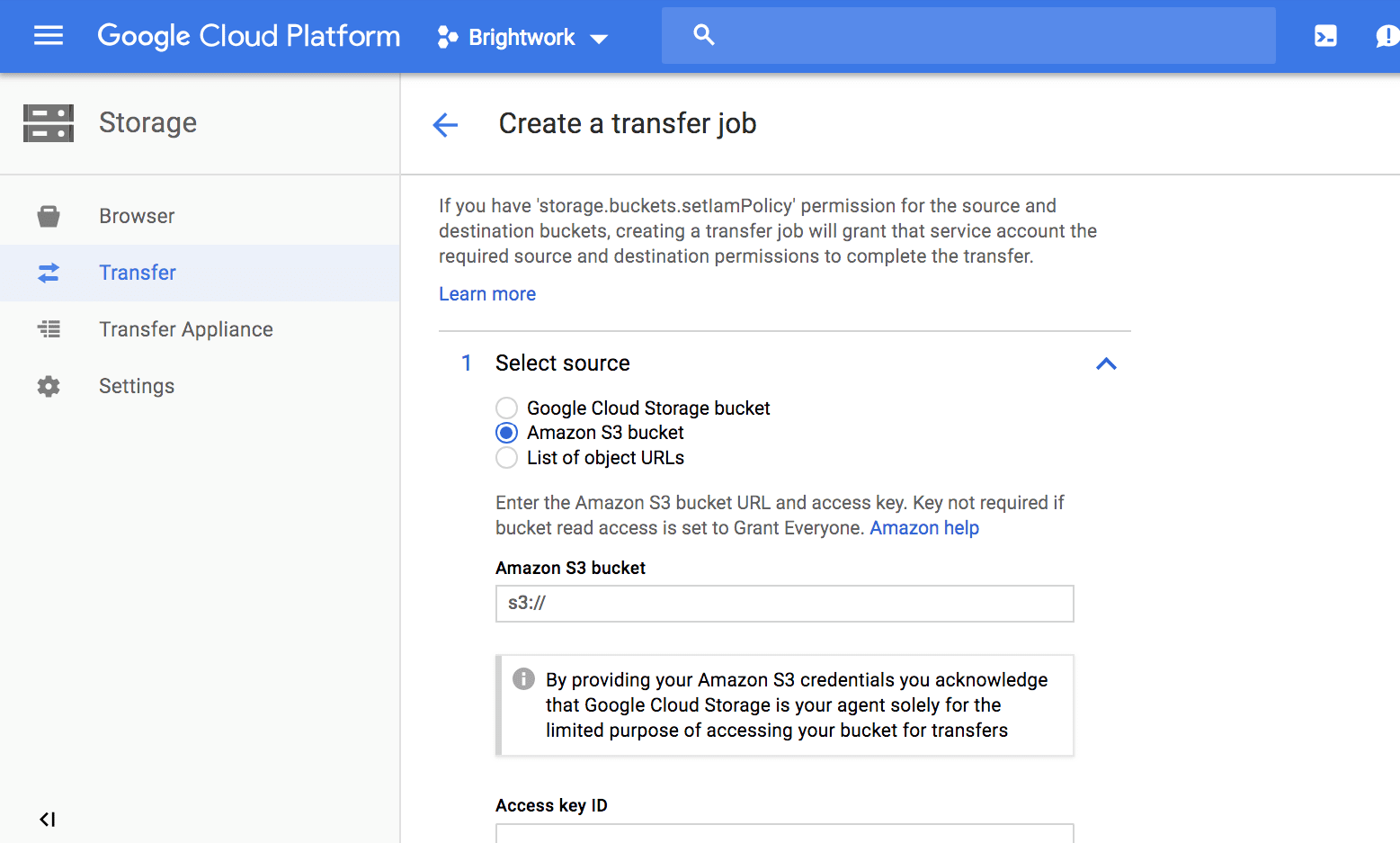 As we discussed earlier, one has a lot of flexibility when using both AWS and Google Cloud. Here we can begin by backing up our data on AWS, and if we choose, switch to Google Cloud. 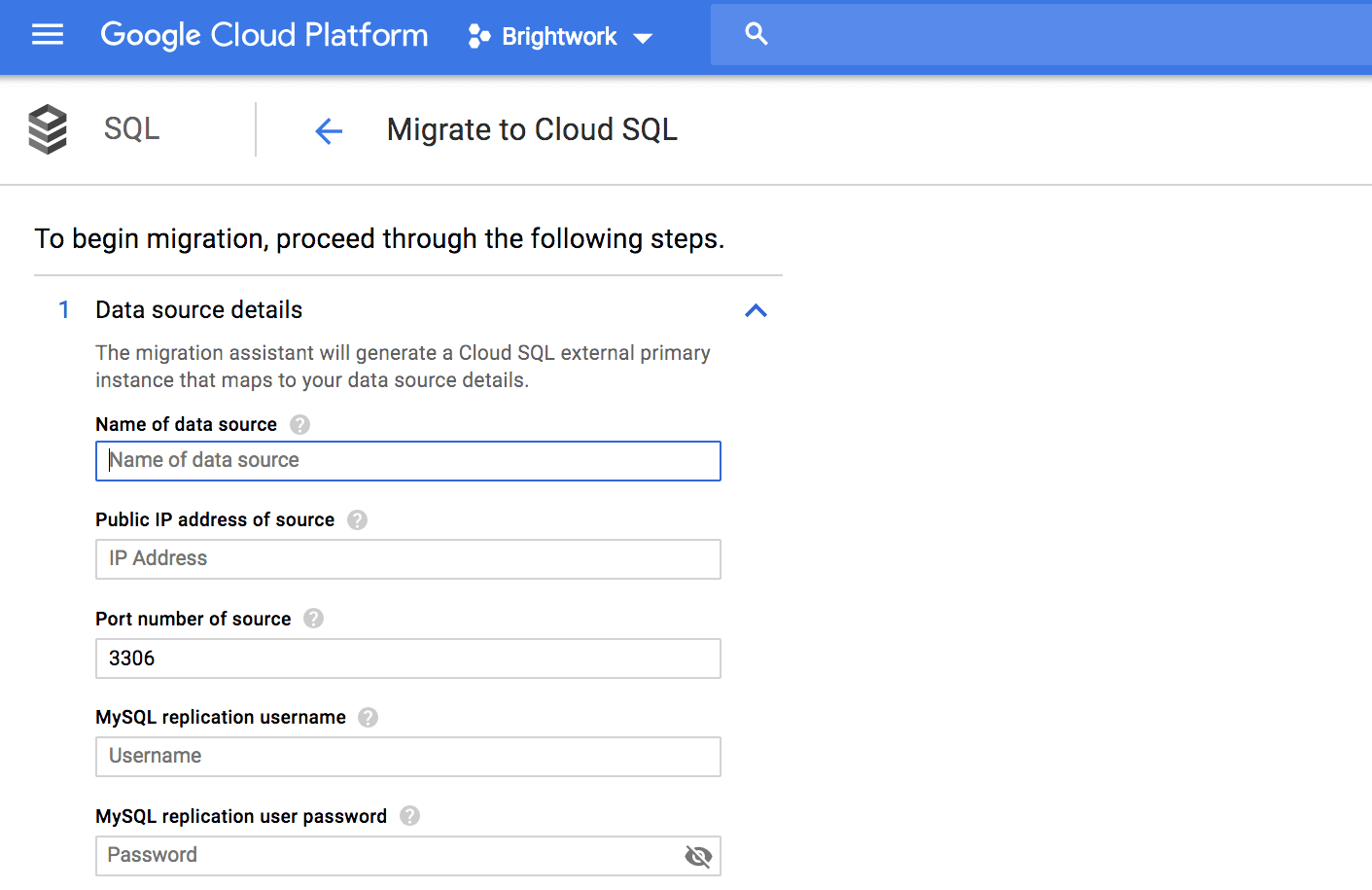 Right after creation, data can be set up for migration. 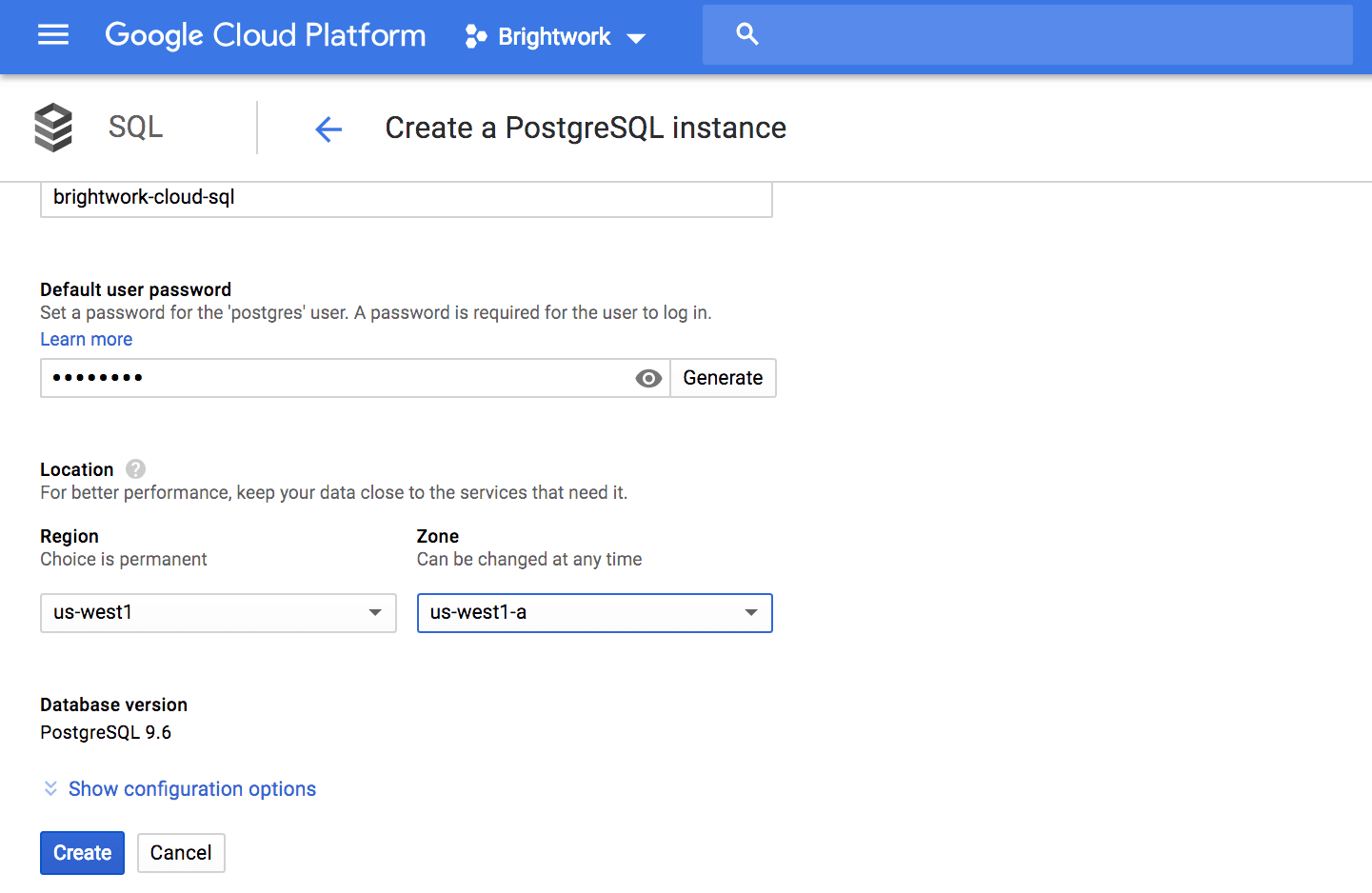 A second natural progression is to migrate some databases from an on-premises SQL or AWS RDS after backing up data. PostgreSQL is a particular favorite of ours. Companies that migrated from the Oracle DB to PostgreSQL often never look back.

We are in a golden age of resource management. One can bring up instances, test them, and bring them down in ways that would have been unthinkable in the past.

Moving Past Stage One of Using AWS and Google Cloud

Backups and database migration are just the starting points for getting one’s feet wet with AWS and Google Cloud. Rather, a testing-based migration of what makes sense to AWS starts with the low-hanging fruit and moves up to more advanced items. We also identify what has been low-hanging fruit from our exposure to AWS and Google Cloud and recommend starting places. It is easy to start small with AWS and Google Cloud that the testing approach is the natural default position. The overall testing approach and low cost and low-risk capability to perform testing are some of the areas that strongly differentiate AWS and Google Cloud from SAP and Oracle. This shortens the time by which feedback is received. This changes the overall decision-making process in IT organizations. It means that the IT organizations can rely less upon projections and sales information and more on trying out the various AWS offerings instead of having to project. 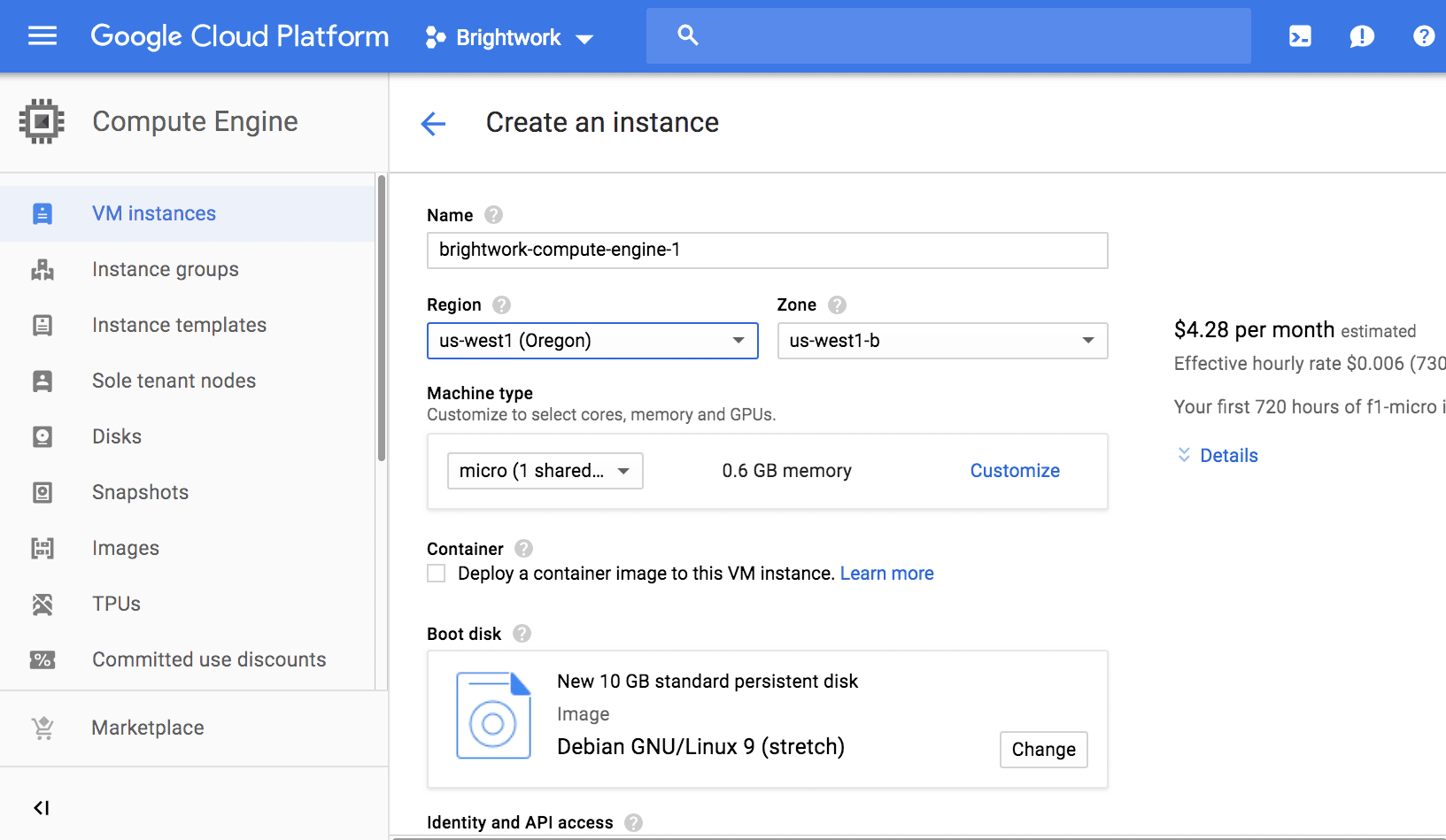 Virtual machines are a primary building block of the cloud. Notice we can even set up a micro virtual machine to create a small test environment.

A Breath of Fresh Air for Database

Migrating databases to AWS will be a breath of fresh air for SAP and Oracle customers. While SAP and Oracle base their business on lock-in, which perpetuates a mentality where old investments need to be protected (as they cannot easily be switched off), SAP and Oracle want you as a customer to buy specific things.

AWS RDS is offered for the following databases. 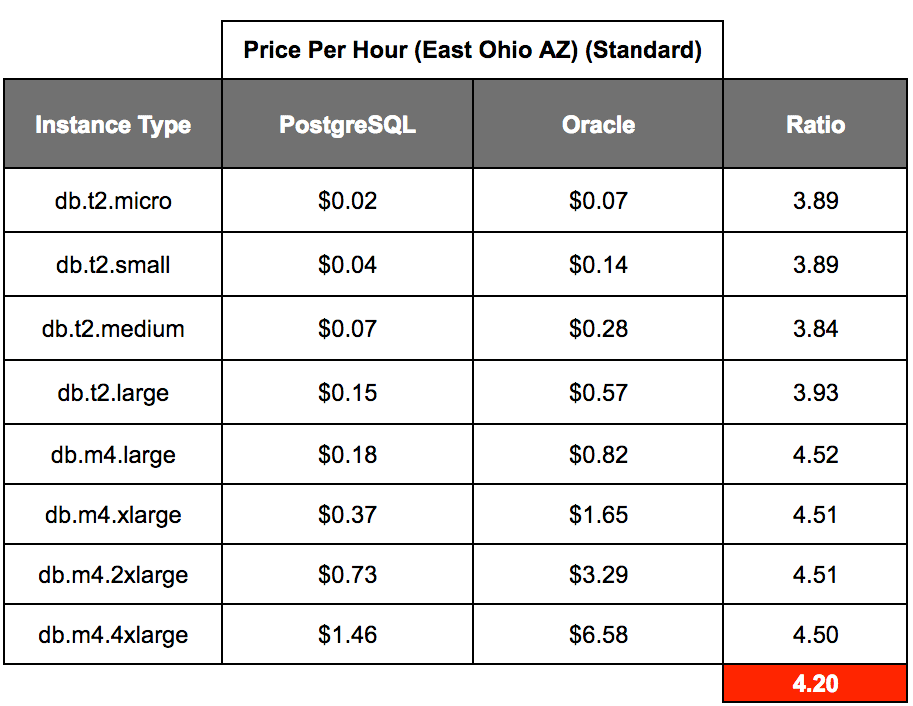 Of the different RBBMS databases offered by RDS, Oracle is by far the most expensive. The graphic above compared the instances that were available for both PostgreSQL and the Oracle database. On average, Oracle costs over 4 times as much to run per hour on AWS as did PostgreSQL. This analysis was performed against the Standard Edition 1 of Oracle. Standard Edition 2 was roughly another 8% more than Standard Edition 1.

One of the topics is whether AWS charges more for products that it developed rather than open-source options. Therefore, we decided to compare Aurora versus PostgreSQL. 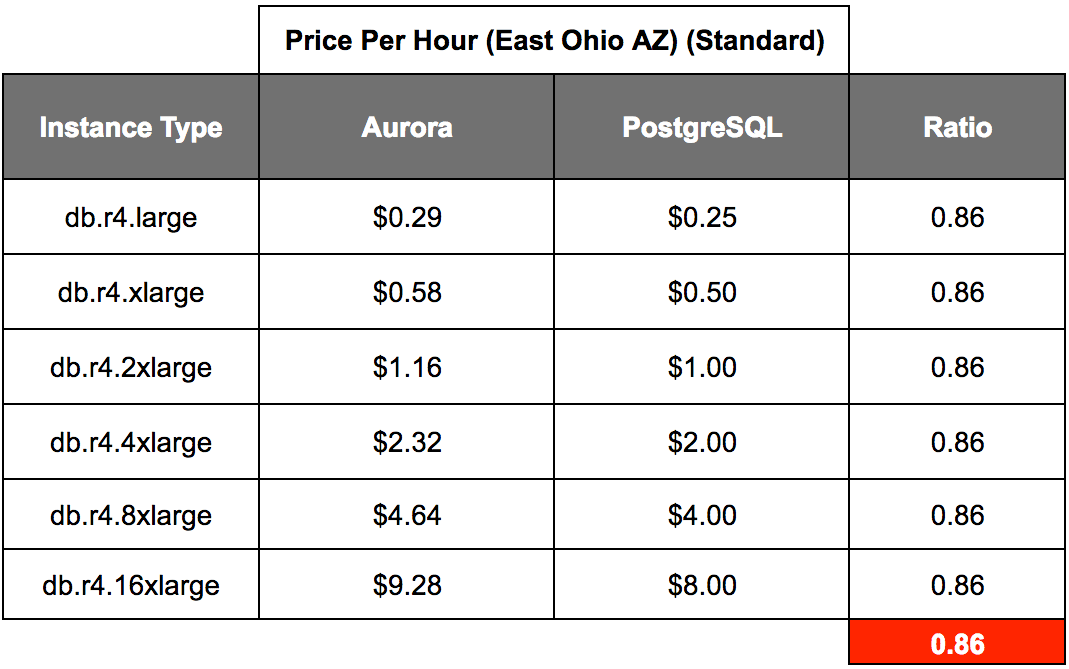 It turns out that AWS does charge more for PostgreSQL than for Aurora or homegrown database versus an open-source database. And the difference is around (14/86) or 16.6% more. Therefore, this in part answers how much incentive AWS has to push their databases over other alternatives. The answer from a financial perspective is “not much.”

AWS RDS is free for customers to try and provides 35 different instance configurations ranging from 2 CPUs to 128 CPUs. This includes low network bandwidth to 20 MBPS. Moreover, of course, scalability allows one to switch between the different configurations. This type of flexibility never existed before AWS introduced the RDS, and as usual, AWS is the first to introduce such things.

While we have focused on open source databases, AWS supports Oracle. Oracle to Oracle is the most straightforward migration. However, moving on from the Oracle database is where the more extended savings can be found as AWS offers managed database service.

This means that AWS now performs much of the work ordinarily performed by the DBA. Oracle had no practical answer for this, so they came up with an impractical one. They decided to develop a fallacious concept called the autonomous database.

With the automated database, Oracle proposed the following: 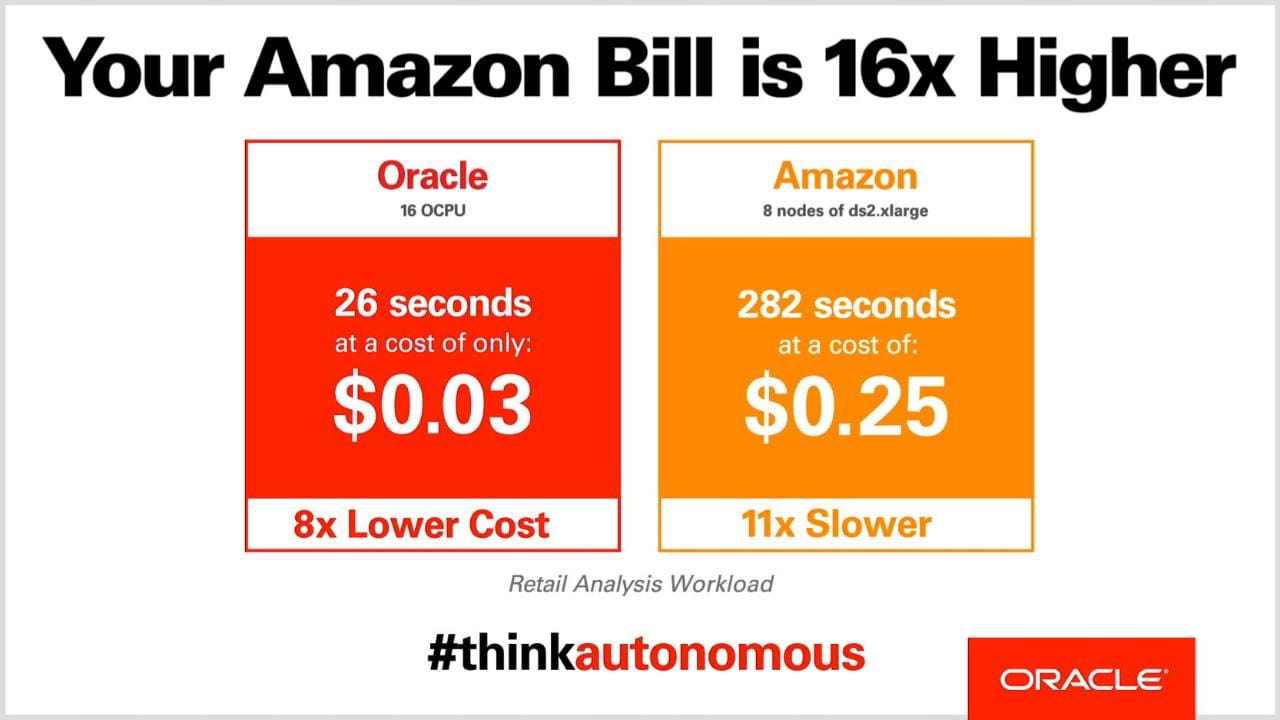 Oracle made a big push on its supposed autonomous database, but the story about this database fell apart as soon as the details were explained. Oracle increased the price of its database on AWS before this announcement of the autonomous database. AWS has an excellent reputation for database performance. The proposal of Oracle on both performance and cost is not believable. Secondly, the vast majority of customers will not want to use Oracle Cloud, which is required to run the “autonomous database.”

As shown several pages previously, our independent comparison showed that the Oracle database costs more than four times as much to run on AWS versus PostgreSQL. However, Oracle stated it would run databases at 1/8th of the cost of AWS? The following is explained by Dan Woods (#2).

While the impact of this is obvious, making it cheaper to run the same Oracle footprint on Oracle’s cloud compared to AWS and Azure, it is not at all clear that Oracle is going to benefit in any significant way from making it more expensive to run on other clouds. Here’s a look at why Oracle may have done this and the likely impact. So then will this price change actually cause more people to use the Oracle cloud? For that to happen, someone would have to switch their entire cloud deployment from AWS or Azure to the Oracle cloud for the sake of the increased cost of one part of the infrastructure. Given that Oracle isn’t in the mix in most of the cloud deployments I’ve heard of, and that its cloud is far behind both AWS and Azure in terms of features, adoption, and ecosystem, it is likely that it would cost a huge amount more to move to the Oracle cloud than to stay with AWS or Azure, so no, this policy change isn’t going to cause a rush of Oracle cloud sales.

So is Oracle in effect giving up on competing with AWS and Azure databases on feature, function and price? Is the doubling of prices of its software the only way that Oracle can make more dough on the fastest growing clouds? Whatever this policy change is intended to be, it certainly isn’t a show of strength by Oracle. It seems more like a show of weakness and an attempt to grab a sliver of revenue that may be out there for a short while.”

Dan’s comments were published in Forbes on Mar 23, 2017. But this price change makes it easier to make the case that Oracle is lower in cost on Oracle Cloud than on AWS or Azure.

The Composition of the Autonomous Database

The Oracle autonomous database is comprised of the following items:

Oracle offers two configuration choices for the Autonomous Database: enterprise and mission-critical. The 99.995% availability is only true for the mission-critical configurations, which cost 2X the monthly subscription fee. This increased cost is based on the requirement of a standby database that doubles infrastructure and storage resources.

The Exadata X7-2 systems only dedicate OCPUs and a single PDB (Pluggable Database) to each cloud client. The memory, flash cache, and other resources on an Exadata system are not dedicated. Oracle will decide how many other clients share the PDB resources available within a single Exadata machine. Clients with strict service level agreements for their production workloads have to ask themselves if this type of multitenant configuration is acceptable. This is the sequence we predict with the autonomous database.

The Basis for Predictions

Where do our predictions come from? From the experience that one of the authors, Ahmed Azmi, has obtained from years of working with Oracle. And there is another problem with the autonomous database. Oracle claims that the Autonomous Database uses machine learning to detect anomalies in usage patterns automatically. This means it has to have access to sufficient customer data to train a customer-specific threat model to protect each specific customer. Furthermore, there is a question of how to preset a rule to distinguish between a spike caused by an attack from a spike caused by seasonality.

“Even in areas where Oracle likes to trumpet the richness of functionality it offers, like Oracle HA, the reality is that much of the “richness” is actually external to the database itself. You “have to add a ton of stuff outside of the database [to make it work] for replication, failover, monitoring, etc,” Keep says. Of course, this being Oracle, each of these add-ons is sold separately, resulting in a fat price tag and a seriously complex system to manage. Even worse for Oracle, the only way for a developer to get access to such Oracle extras is on the Oracle cloud, which basically no one wants to use.”

Many companies that have the Oracle database have to stay with it.

And common reasons are the following:

And as noted by Silvia Doomra.

“If you’re using a packaged software application whose vendor does not certify on PostgreSQL, migrating is probably a non-starter.”