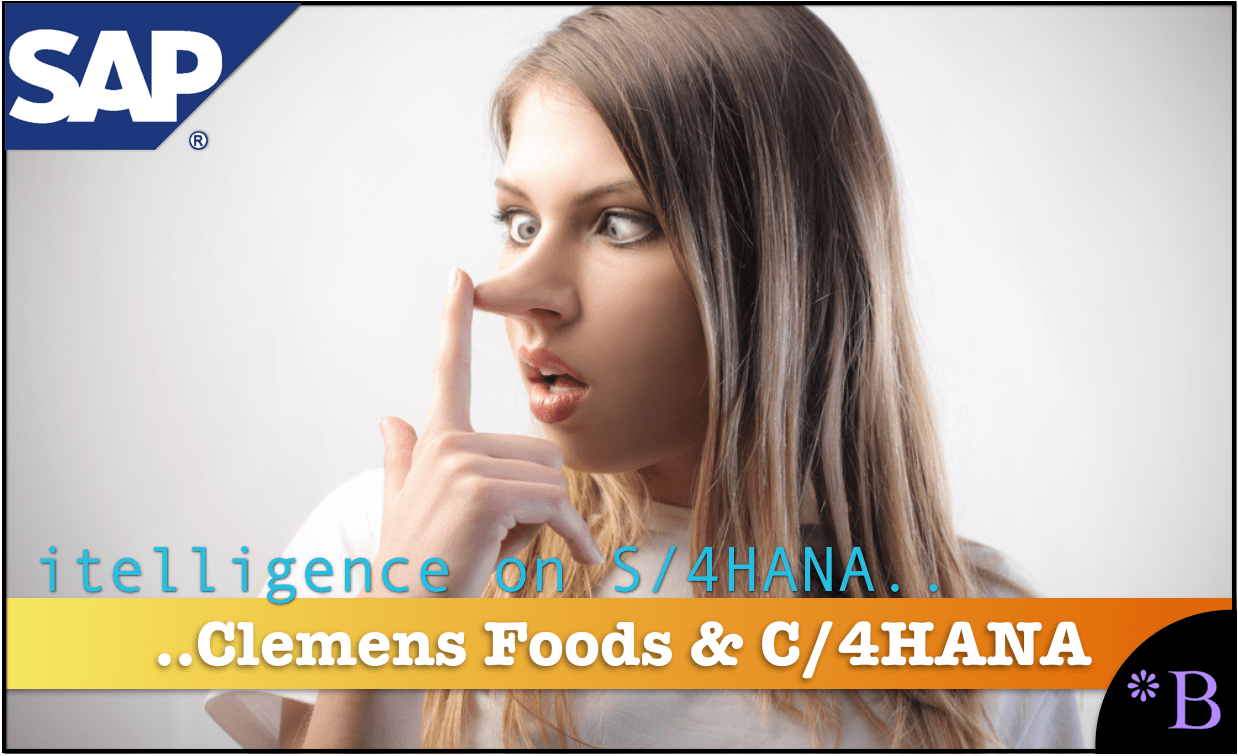 Video Introduction: How to Interpret itelligence’s Massive Lies on S/4HANA

The lies in SAP consulting firm websites never cease to amaze us. intelligence is one of these SAP consulting firms that has zero concern for whether anything it publishes is true. intelligence writes articles for people that can be tricked and essentially just repeats whatever information is provided to them by SAP marketing. You will learn about itelligence’s claims made on their S/4HANA website pages and our analysis of these claims.

Digitization has nothing to do with anything. The ERP system that S/4HANA replaces is also a digital system. This would be like saying you are replacing your current car with a new car with an internal combustion engine. Yes, so does your current car.

S/4HANA has failed at the vast majority of companies that it has been attempted to be implemented. Lidl wrote off 500 M Euro due in part to a failed S/4HANA implementation. Nanshan is $336 M into its implementation and has suffered major dislocations. It is an odd statement that companies can not afford not to implement S/4HANA.

Secondly, S/4HANA does not contain functionality that is contained in ECC. Functionality has been cut, which we cover in our analysis in the article The S/4HANA Simplification List. S/4HANA is primarily a technical reorganization of ECC.

SAP is already offering post-2025 support at a premium, as we cover in the article Why SAP Will Charge a Premium for 2025 ECC Support. We have already predicted that the 2025 deadline will be extended. 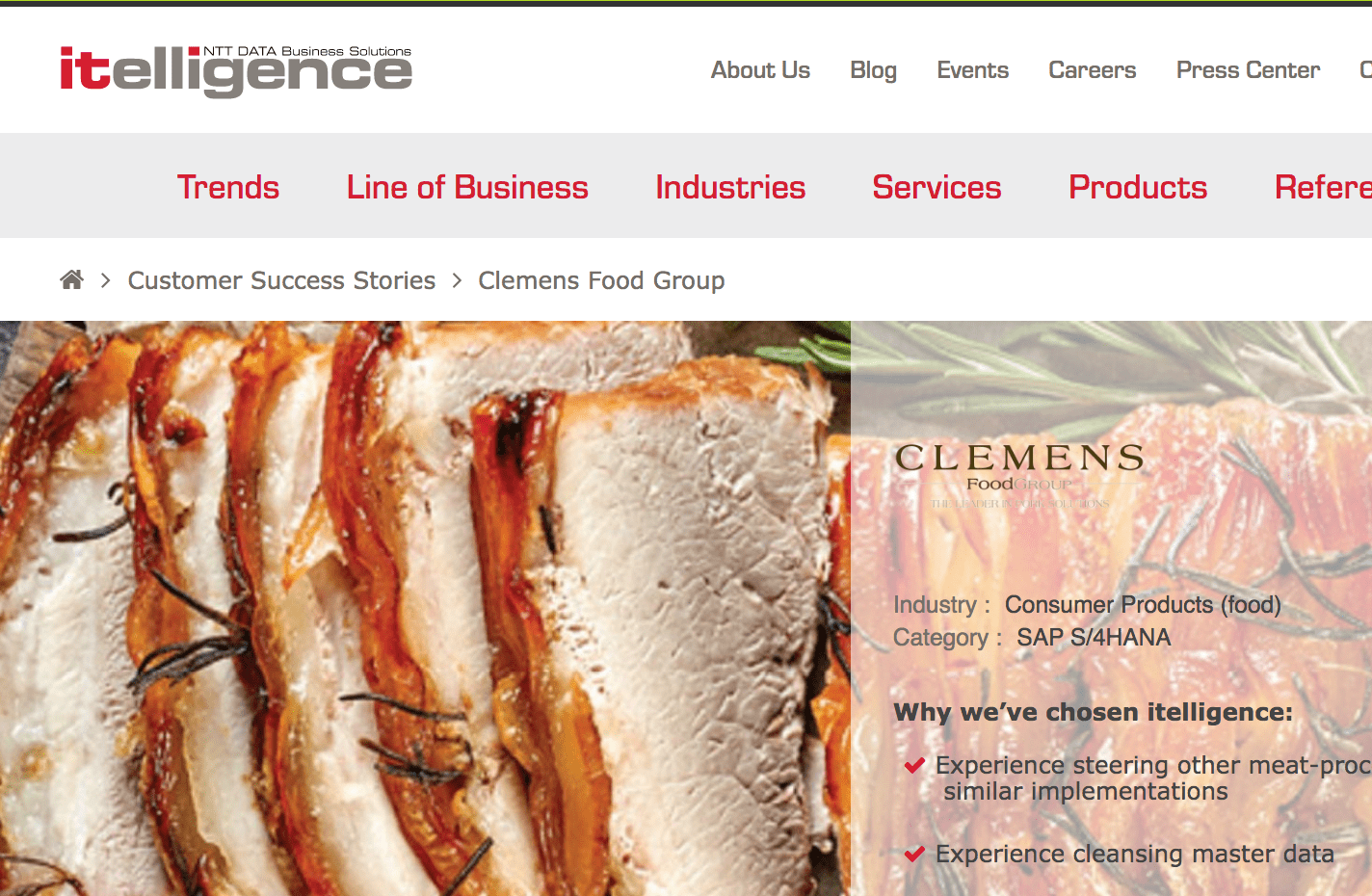 itelligence proposes that they took Clemens Food live. However, as itelligence has been lying throughout their web pages, there is no reason to accept this as true without analysis.

There is no reason that the previous ERP system not have been capable of scaling for the anticipated growth. S/4HANA has no scale capabilities beyond other ERP systems in terms of volumes.

If the company had 70 disparate applications that needed to be integrated into S/4HANA, this implementation cost must have been expensive.

S/4HANA is not a “modern integrated platform.” It has all of the same integration limitations of previous SAP ERP systems and is considerably more difficult to integrate than other non SAP ERP systems. It is also impossible that Clemens Food will be able to replace all 70 systems with S/4HANA.

This is most likely overstated. Clemens Food may have been able to go live, but 2017 is very early, and S/4HANA still has maturity problems. 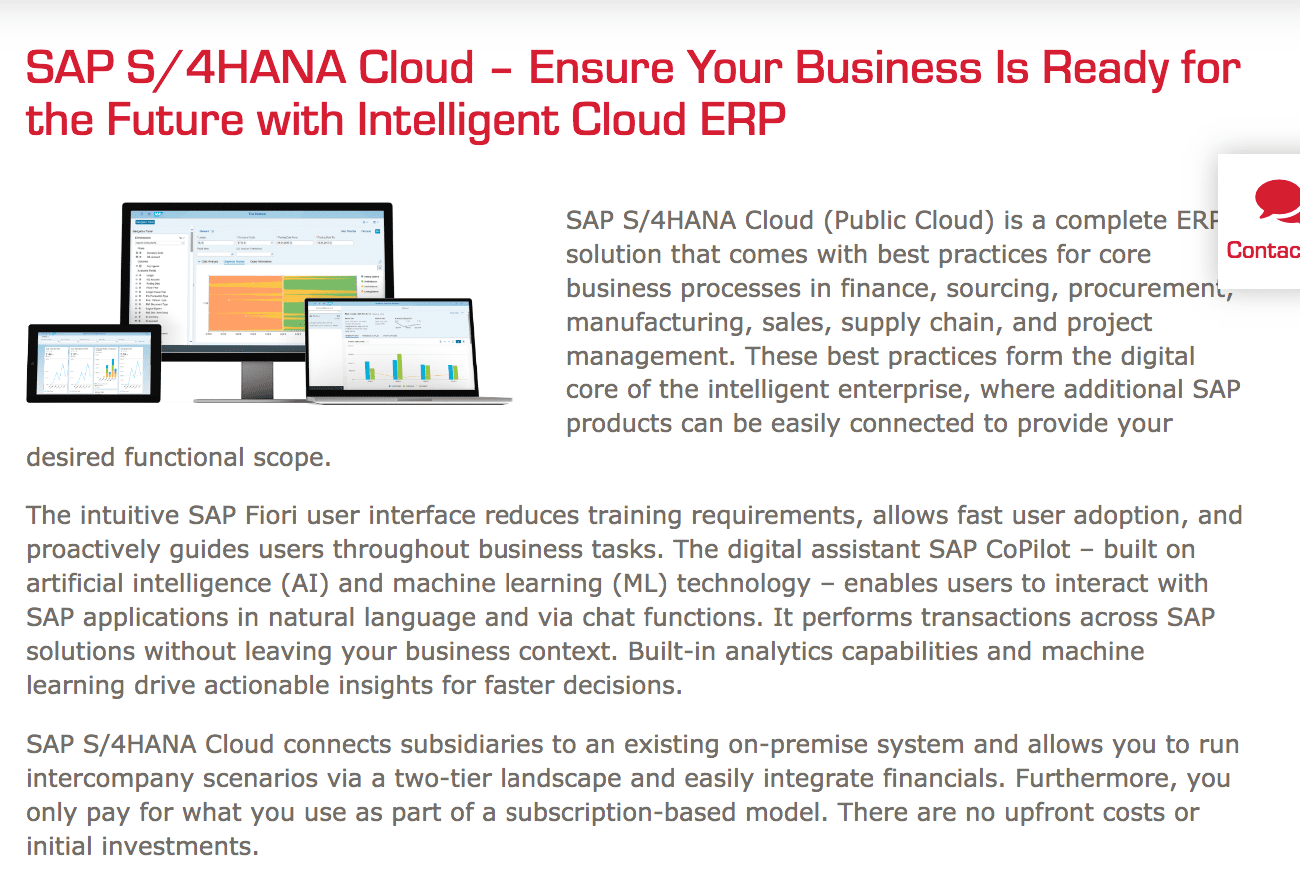 Is itelligence a S/4HANA Cloud Leader? 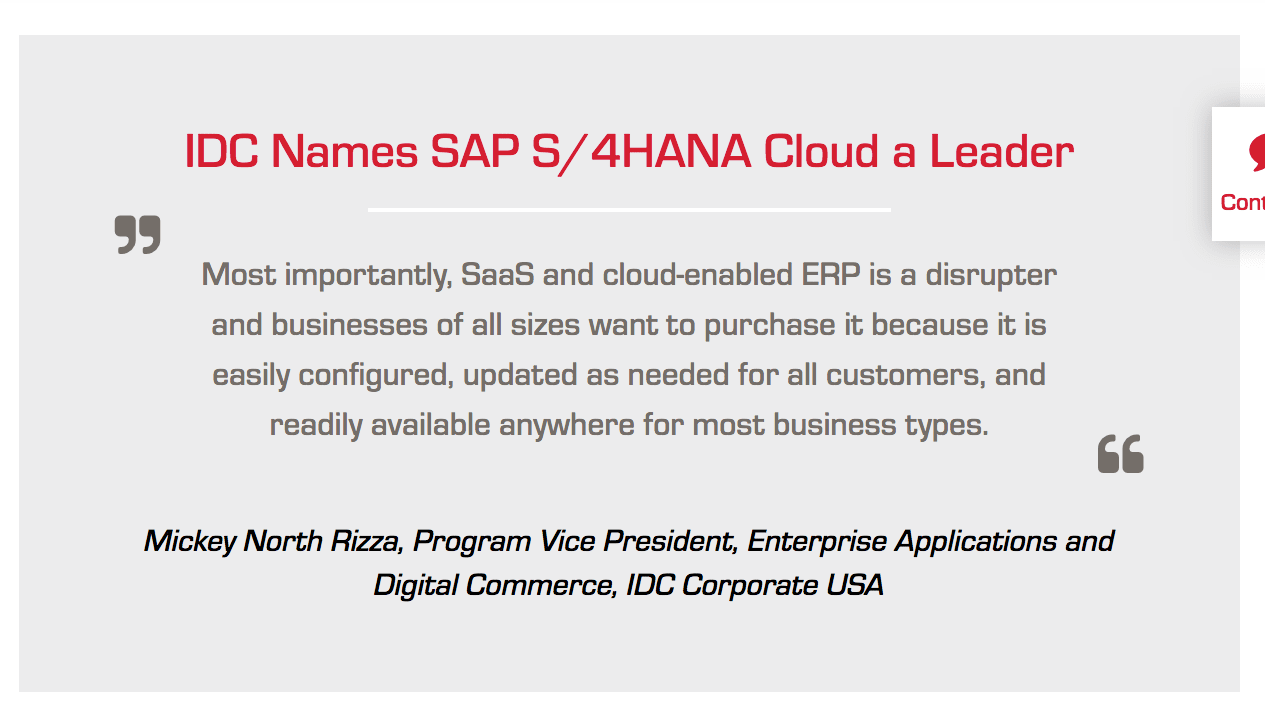 One can normally get whatever ranking one wants out of IDC by simply paying them. IDC has no integrity and is owned by a Chinese firm that has no standards of any kind. Secondly, being a leader in S/4HANA Cloud means little as there are so few S/4HANA Cloud implementations.

The reason for these constant updates is that S/4HANA Cloud is still so immature it is unstable. This is why few companies can go live with the application, which is much smaller in scope than S/4HANA on-premises.

itelligence included an SAP video, which is a highly inaccurate description of what is in S/4HANA Cloud. Companies do not use what is described in this video. This video was taken down by SAP. 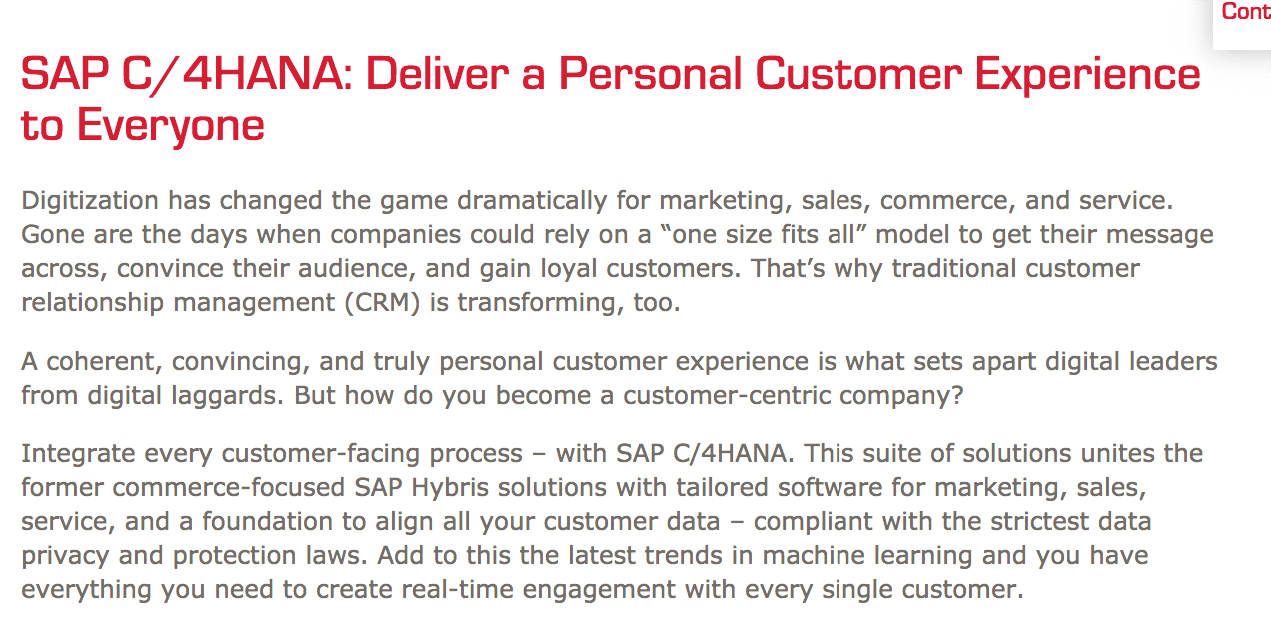 C/4HANA is not yet released; however, that does not stop itelligence from writing about it as if it is a completed product. The first question to ask intelligent is, can you sell me a functioning C/4HANA application? 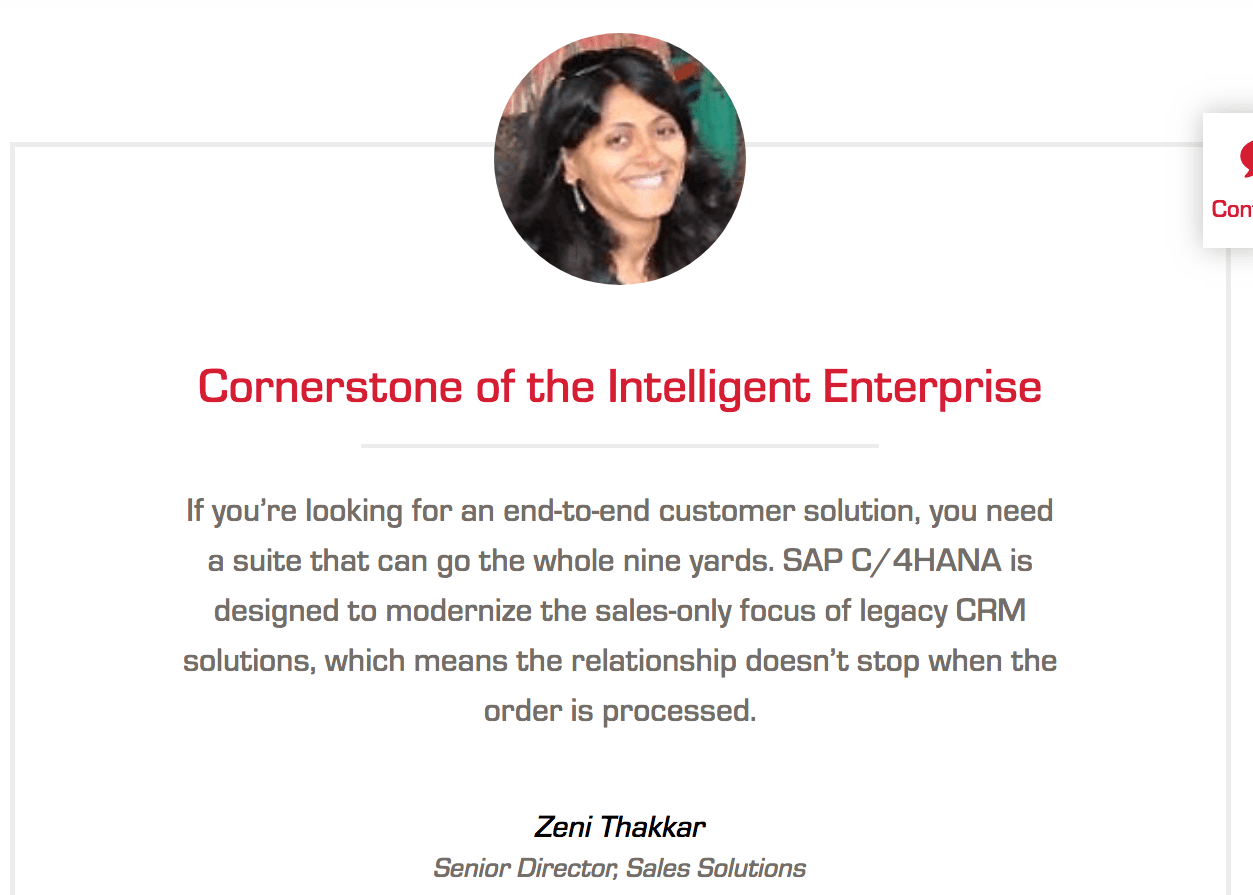 No, this is false. C/4HANA is a hodgepodge of acquired applications, including Hybris and CalladiusCloud (sales performance management), that do not have CRM functionality. CRM applications that follow a CRM workflow are not “legacy.” This continues SAP’s established pattern of calling any application that is not SAP “legacy.”

Both of these products are not complete (SAP Analytics Cloud and C/4HANA), yet these videos discuss them as if they are finished products.

itelligence misrepresented not only the state of S/4HANA but their experience to get S/4HANA projects.

itelligence receives a 1 out of 10 for accuracy for their articles on S/4HANA and C/4HANA.