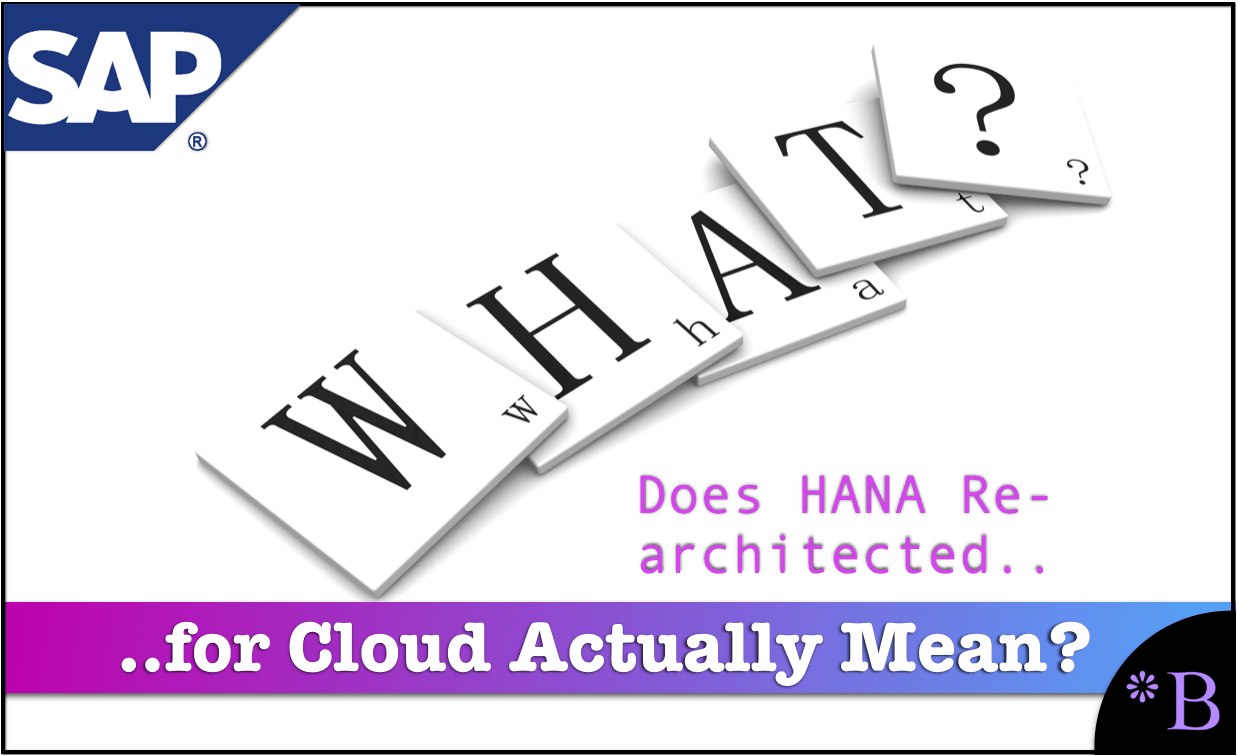 At SAP’s TechEd announced that its HANA database had been re-architected for the cloud. ZDNet covered this.

Beneath those headlines was a very significant development, of SAP re-architecting HANA for its new managed cloud database service to become what it terms “cloud-native.” By that, they are speaking of a separation of storage from compute and embrace of Kubernetes, the combination of which will enable elasticity and quick start, stop, and resizing of cloud services. – ZDNet

Accomplishing in the Cloud What AWS and Azure Have Not Been Able To?

This was analyzed in the following quote by Christian Kaul.

AWS and Azure have so far not been able to rewrite their cloud data warehouse offerings in this way. But I am sure SAP has managed it, given their extensive database and cloud expertise. Neither Redshift nor the Azure version of SQL Server PDW (Parallel Data Warehouse) can scale storage and compute in a cloud-native way.

Also, which version of HANA did they make cloud-native? I thought native meant born somewhere.

Native has a specific meaning.

In another post, we’ll devote a further airing on what’s meant by “cloud-native” data platform as the term is being applied so broadly these days that the definition is in the eye of the beholder. For now, we’ll refer to it as denoting a data platform that exploits the elasticity (use and pay only for the compute that you use) and horizontal scale of the cloud. – ZDNet

Let us help out ZDNet. Cloud-native means developed for the cloud. It is not subjective or in

“the eye of the beholder.”

Secondly, developing for the cloud means exploiting elasticity, but just because SAP announces something does not mean they have mastered it. This is something ZDNet (owned by CBS Interactive) might be more willing to emphasize if they did not receive SAP income. ZDNet makes zero effort to compare SAP’s history versus the reality, and of course, they are being paid not to. They simply accept whatever they are told by SAP. Notice this in the following quote.

By that definition, SAP HANA is just the latest database to exploit a cloud-native architecture. For instance, other platforms such as Amazon Aurora, Microsoft Azure Cosmos DB, and Google Cloud Spanner also exploit the scale of the cloud. – ZDNet

Again, according to ZDNet, SAP does not have to provide evidence. They simply have to make the announcement, and ZDNet immediately associates SAP’s product right along with truly cloud-native products as Google Cloud Spanner and Amazon Arora.

And the list goes on. Oracle Exadata in the cloud also exploits an abstracted storage/compute architecture to support elasticity. – ZDNet

No, this is false.

Exadata is not a cloud. Oracle calls Exadata “cloud in a box,” but that is inaccurate marketing hyperbole and part of Oracle’s pattern of slapping the “cloud sticker” on anything they have.

Exadata is a customized database appliance that is an on-premises server. We cover this in the article How to Understand Exadata and Exadata Cloud Services.

Back to our main train of thought, we think that as the data pillar of SAP’s next-generation enterprise application portfolio, including S/4HANA and C/4HANA, rearchitecting HANA for the cloud presents some unique possibilities. – ZDNet

No, this is also false.

S/4HANA is barely implemented in the cloud, and C/4HANA will not exist for years, as we cover in the article How Accurate Was Bluefin Solutions on C4HANA?

Rearchitecting HANA for the cloud may present unique possibilities, but again, ZDNet assumes that the announcement is real and that it works. There is no reason (when not paid by SAP, that is) to believe either of these things without first seeing the evidence.

Pay As You Go Licensing and Change The Way We Run and Pay for Enterprise Applications?

And combined with phasing in of pay-as-you-go licensing, which will simplify pricing and offer more economical options for running HANA and its sister services in the cloud, the result could lower barriers to adoption. It could change the very architecture and the way we run and pay for enterprise applications. – ZDNet

Once again, ZDNet assumes because SAP says they will do something, they say they will. SAP has been promising more transparency in pricing for at least a decade, and it has yet to arrive in anything but around the fringes. SAP has been continually promising to make licensing more cloud-like in press releases while doing nothing to make them more transparent or cloud-like in reality. This is part of their commitment to cloud washing.

None of SAP’s cloud offerings, even the S/4HANA Cloud, are month to month. They are all at least yearly in commitment. SAP is a vendor that sells on-premises software under on-premises and highly restrictive terms and conditions while promising that it offers the flexibility of AWS.

It stands to reason that if the underlying data platform is re-engineered to support elasticity, why shouldn’t the application tier? It provides the opportunity for SAP (and others) to rethink their SaaS enterprise application portfolios to provide the ability to ramp up and down compute for specific business processes, or modules. – ZDNet

Brightwork Research & Analysis is a SaaS provider with our Brightwork Explorer application for forecast error measurement and MRP parameter optimization, but we don’t have any servers. We don’t have to make any adjustments — AWS or GCP make the adjustments.

You know, HANA is the most popular item in terms of instances available on AWS.

But I hypothesize that it is just for marketing. SAP does not want companies running HANA on AWS because they can’t upcharge them the same way as we cover in the article How to Understand SAP’s Upcharge as a Service Cloud. SAP wants them to use a corrupt private cloud entity (a CPCE) they can control. Therefore, I view the HANA instances on AWS as a marketing gimmick.

How SAP’s Story Falls Apart for the Public Cloud

The announcement is directed towards the public cloud providers. However, this is not a market SAP has much to do with.

SAP has virtually (and outside of its declining SaaS acquisitions) nothing to do with the cloud. Most of SAP’s applications can’t function in a private cloud environment.

SAP’s only hope to attain what McDermott proposed as margins from the cloud is to keep pushing the CPCEs, which aren’t cloud but are hosting. It is not multi-tenant, and there are no economies of scale versus the public cloud. Instead, it is just on-premises but in different geographies. They are moving the server location from the IT department location to the hosting location.

It is amazing. HANA has fallen on its face in nearly every dimension — and that is just backward engineering other databases — and yet they continue to make new announcements. HANA should be called the Chinese knock-off database, as we cover in the article Did SAP Just Reinvent the Wheel with HANA? And SAP always has IT media entities that will carry their message and pretend they are engaging in journalism.