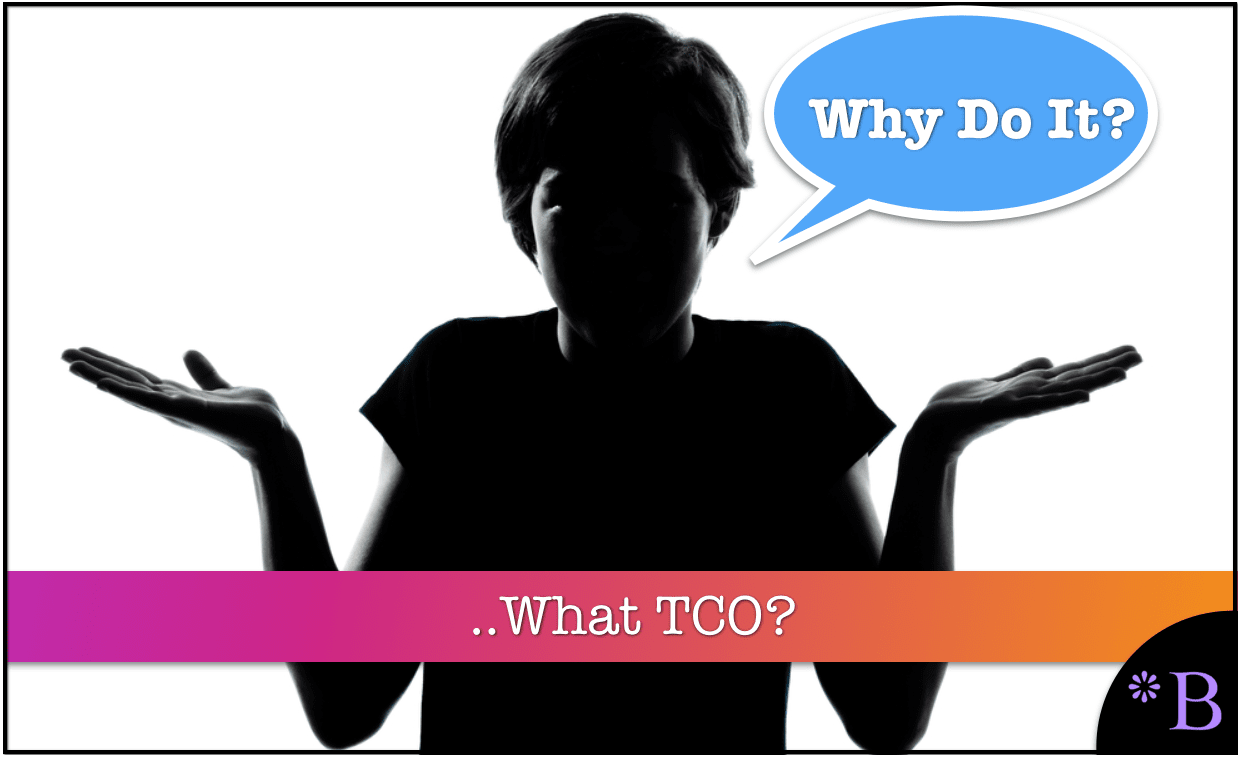 TCO is barely performed in any shape or form in IT for either software selection or other IT decisions such as outsourcing, and when it is done, it is usually done poorly. However, I do not want to give the impression that this issue is specific to IT. Companies have major problems performing TCO, and these problems extend to all manner of areas.

One is manufacturing outsourcing, where many outsourcing decisions were made by comparing part costs and not performing a TCO analysis. Compared to the direct part cost between the US and China, many companies found a lower cost of between twenty-five and forty percent, but did not consider other costs!

Costs such as longer lead times, reduction in supply chain flexibility, loss of control over the supply chain, bottlenecks, and many other costs needed to be evaluated before the outsourcing decision was made. The following graphic from Archstone Consulting shows all of the different cost categories that must be analyzed in manufacturing outsourcing. 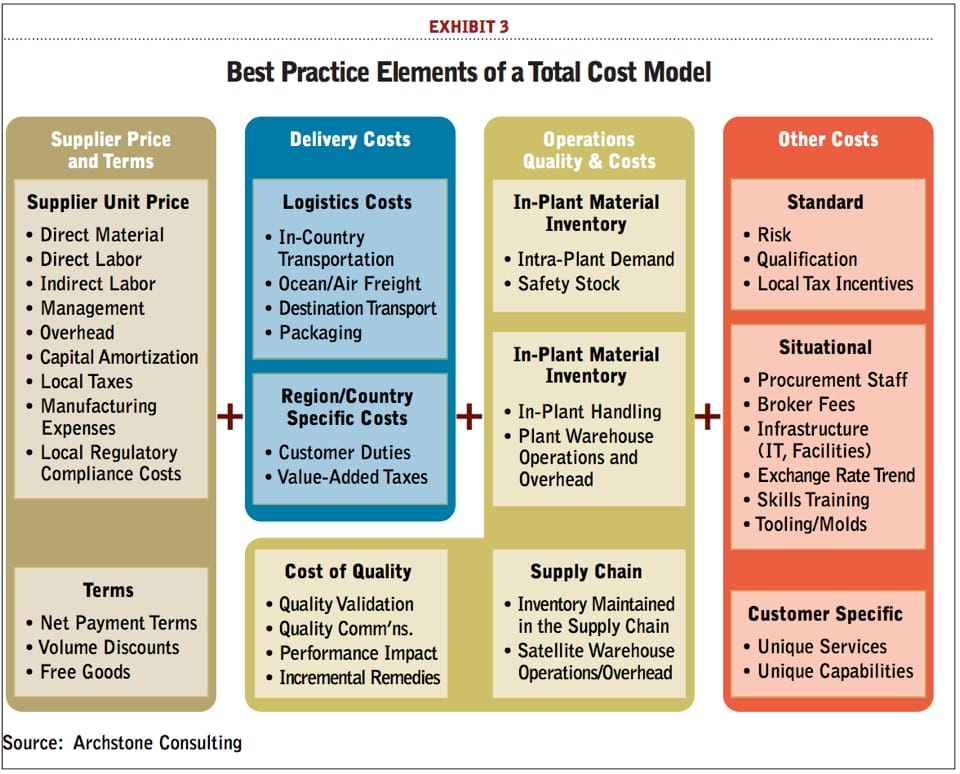 Most companies that performed manufacturing outsourcing were not interested in getting to this level of detail. It was far easier to compare part costs and assume everything else would stay about the same. This is what passes for analysis at many companies. Based on a 2009 survey, Archstone Consulting estimated that sixty percent of manufacturers ignored twenty percent or more of offshoring costs.

Many factors are left out of the TCO analysis of manufacturing outsourcing, including the following.

Lack of Managing an Offshore Contract: Underestimating the people, process, and technology required to manage an outsourcing contract.

Quality Problems: Substitution of lower grades or different materials than specified is a common problem.

Travel Expenses: One or more visits to an offshore vendor can dissipate cost savings.

Cost of Transition: Overlooking the time and effort required to do things in a new way. It takes from three months to a year to complete the transition to an offshore vendor.

Considering the numerous accountants and financial experts that work in so many companies, the rudimentary nature of how companies make cost decisions can be shocking.

“Accountants deal with hard costs such as material costs, material overhead costs, labor costs, labor overhead costs, quality costs, outside services, sales, general and accounting costs, profits, etc. What they don’t measure are the intangible costs associated with business such as the true costs of delay, defects, and deviations from standard or expected processes (the three D’s).” – Michele Nash-Hoff

Much of what I have described up to this point makes it difficult for companies to develop accurate TCO calculations. Hypothetically, IT analyst firms should be good candidates for performing TCO analysis. Gartner, the largest IT analyst firm in the world, is actually credited with first introducing the concept of TCO to enterprise software. However, as discussed, most IT analyst firms have major conflicts of interest because they sell consulting services to vendors. They also take considerably more money from the large vendors compared to the smaller vendors—and not coincidentally, larger vendors tend to charge more for their software, more for their consulting, and so on. The upshot is that the TCOs of large vendors will be higher. Since most IT analyst firms take the most money from vendors with the highest TCOs, they have little incentive to provide detailed TCO analyses. Doing so would probably cause them to lose some of their software vendor consulting revenues.

Also, different IT analyst firms have different interpretations of TCO. For instance, Gartner tends to be “pro-TCO,” while Forrester tends to be “anti-TCO,” proposing that most companies cannot aspire to TCO successfully and that simpler approaches should be used. Forrester also points out that, according to their surveys, only about twenty-two percent of purchasing companies use any TCO in their decision-making.

Is TCO Calculation Even Possible?

Several entities disagree on whether or not a full TCO analysis should be a goal. In this section, we will review the concerns leveled frequently at TCO. One of the entities—which could be labeled as anti-TCO and influential in the area of enterprise software decision-making—is Forrester, the IT analyst firm.

“To really implement TCO-based analysis it takes a comprehensive and continuously updated catalog of asset inventory, in-service dates, agreed upon operating cost rates for activities, and a scheme to divide shared costs among the constituent business processes that use them. For most firms, this is a pipe dream viewed either as a waste of resources in a futile quest for achievement or too intimidating to even begin. Forrester recommends a more expedient and realistic financial approach that can be just as effective but much simpler to calculate—relative cost of operations (RCO). RCO can be a middle-ground solution, moving far beyond acquisition-cost-only analysis, while being more achievable than a full-blown TCO.” – Forrester

I agree with Forrester’s assertion that companies rarely use TCO, but I do not see why performing a complete TCO analysis is beyond most companies if they are properly advised. Because we take no money from vendors, we can legitimately say that our TCO analyses do not have a bias. One could always propose other non-financial biases—and these are possible and also come down to whether you consider exposure to a topic to be a bias or to be knowledge (babies, after all, are completely unbiased and open-minded)—however if one analyzes the major problem concerning objectivity in analysis in not only the enterprise software arena but also other areas such as financial advisement—consistently the problem is financial bias.

This is true to such a degree that once financial bias is removed, one has taken care of the vast majority of the problem. Forrester is not alone in their concerns regarding TCO. The white paper Rethinking TCO takes a similar view of TCO as Forrester. Rethinking TCO points out some of the limitations of performing a meaningful TCO analysis when they state:

“The large amount of variability in product complexity and comprehensiveness from one enterprise vendor is an important limitation on the potential for using TCO in multi-vendor analysis.”

However, this type of calculation will be performed either implicitly or explicitly (with an actual TCO); therefore, it is difficult to see how not performing the analysis is better than performing a TCO, especially considering what is at stake. In fact, merely performing the analysis—imperfect as it may be—puts a company in a more analytical frame of mind during their selection process.

Rethinking TCO also made the following argument against TCO.

“…different companies within the same industry may have significantly different business processes expressed in the same software product, or may have extensively customized a standard software package in order to gain some degree of competitive advantage. Indeed, this variability in use often represents a key strategic value for the enterprise software package: by using a standard software product in a nonstandard or customized fashion, many customers hope to gain competitive advantage over other companies in their industries that may be using the same or similar software.”

That is all true. However, this is where the implementation experience of individuals performing the TCO comes into play. If they are sufficiently experienced, they can increase or decrease a particular item’s cost through their knowledge of how much customization can be expected on the project. Furthermore, a noncustomized TCO value probably would not make a lot of sense. It appears that this is an argument against non-customized TCO calculations.

“The implementation process is another major factor that adds to the problems with using TCO as a vendor selection tool. Implementation costs figure as one of the largest single expenses in enterprise software, and yet they are neither standardized nor consistent from one vendor to the next or one implementer, or implementation, to the next.”

Companies that implement enterprise software often skip TCO evaluations because they require effort and would get in the way of making trendy purchases. Most executive decision-makers tend to believe in safety in numbers, which means buying and implementing what other companies are buying and implementing. As for consulting companies, because they are surrogate software sales entities (that is, their interests are aligned with software sales because these sales drive consulting revenue), they are not oriented to the consumer or purchasing side.