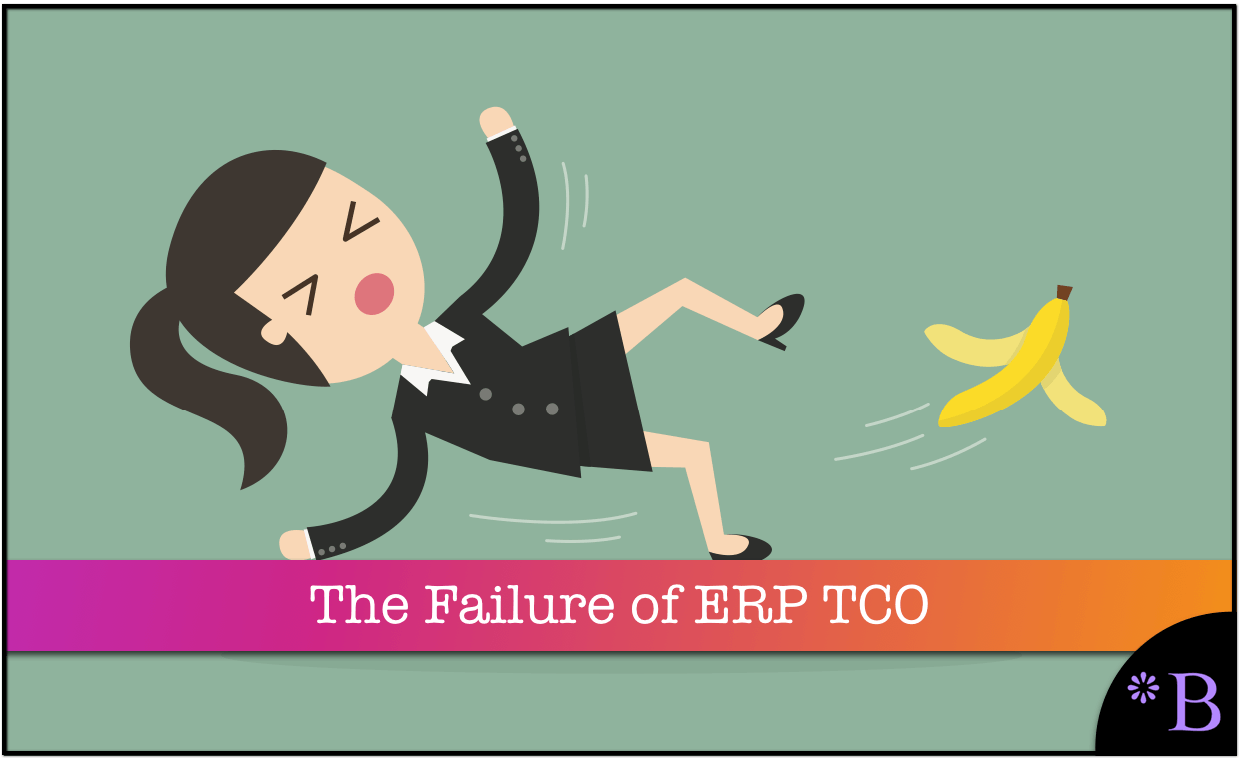 In the field of enterprise software, one of the most amazing stories of the past several decades is the mass purchasing of ERP systems—purchases made without the customers searching for evidence that ERP systems are good investments. If they had looked, they would have found that the logic presented to sell ERP systems had no evidence to support it. In the early phase of ERP’s adoption, the excuse could have been made that the systems were new and studies had not yet been performed. However, thirty years after ERP systems were first adopted, that excuse no longer holds any water. This story is explained in detail in the book, The Real Story Behind ERP: Separating Fact from Fiction. The adoption of ERP systems by so many companies occurred with very little actual research on the part of the parties involved either in making the purchases or in recommending the systems.

The vast majority of ERP purchases were made without TCO calculations performed, which is why I dedicated a chapter of this book to ERP—it is such an amazing example of what happens when decisions are made without the necessary research—and instead of research large groups of individuals simply buy what other companies are buying—all the while assuming “someone else must have checked.” This short chapter will illuminate what happens when purchasing decisions are made without sufficient research. These long-lived mistakes with respect to ERP have affected every part of IT today. ERP systems turned out to be vastly more expensive than even the highest “generalized” cost estimates of purchasing companies, even though eighty percent of the time these companies performed no real estimation. Now the ERP systems consume a very substantial portion of the overall IT budget, particularly for companies that purchased from the most expensive “big ERP” vendors. Other applications have been crowded out, and almost any of these other applications would have a higher ROI than ERP.

Did Logic and Analysis or Trendiness Drive ERP Procurement Decisions?

ERP was sold to companies on the basis of a number of arguments, which are outlined in the Brightwork Research & Analysis Press book, The Real Story Behind ERP: Separating Fact from Fiction, and then analyzed. However, it must also be recognized that many ERP purchasing decisions were made because companies felt they simply needed to have ERP, and these decisions were driven by fear—such as the Y2K fear that drove so many ERP implementations—or by a herd mentality.

“Slater (1999) discusses the breadth of such problems as he notes that ‘companies buy multi-million-dollar software packages only to find out they don’t work—or at least they don’t work well—for one of their key business processes.’ The reason, Slater suggests, is that ERP software is so hot, the flames fanned by consultants and the technical press cause companies to simply push forward without dealing with such key restrictions.” — Technology Monoculture

Another reason that success is often overestimated is that companies do not even know the applications well enough to know that they have failed. That is, they
cannot properly measure the output of their system. While the users may know the system does not work as desired, the executive decision-makers often do not. In my own field, I have written a number of articles that explain that often some of the most advanced software available is configured incorrectly to such a degree that there was no point in implementing the sophisticated software that was chosen.

When I have brought the topic up of analyzing the actual quality of the system output with several of my clients, I have sometimes been told that no time was allocated to fix the system and that we must “hit the deadlines,” which is loosely translated into rolling out the flawed configuration to new regions. The information I provide is often suppressed and never reaches the ultimate decision-makers. I have also been asked to suppress what I know about the problems with the configuration and to make it sound as if the application were correctly configured when discussing it with the users. Therefore, the top decision-makers are in effect insulated from accurate information about how systems perform and instead told that everything is on track. Furthermore, information is not only suppressed by consulting companies (which, of course, is incredibly common), frequently, the company’s own IT department withholds information from their own business, which explains the fact that even IT and the business cannot agree on striving for an effective software solution because of the differing incentives between IT and the business. So, when analyzing how and why companies do not perform TCO, the first assumption to dispense with is that those companies have rational decision processes or have effective channels for transmitting information to decision-makers. I could speak at length on this topic and have many articles that explain this in a multitude of different areas. However, to those with work experience, I suspect that this is not exactly new news, so I will finish with this topic here.

The High TCO of ERP

ERP systems sold on the benefits of lower costs have actually proven to be very expensive, not only to implement but also to maintain. ERP systems have continued
to become more expensive in terms of their direct cost because when companies give so many modules over to one vendor, they also give up a lot of negotiating
leverage. The ERP vendors use this leverage in several ways. One way is to sell uncompetitive software in other areas in the same account. From a marketing perspective, ERP sales are the “wedge” that gets the company into the account. Once the wedge is in place, ERP is in the catbird seat in terms of selling more
software into the account.

A second way ERP vendors use this leverage is to increase the cost of the yearly support contract. Generally the TCO of on-premises ERP systems is considered to be high.

The High Opportunity Cost of ERP

An area of ERP that is underemphasized or simply ignored altogether is the opportunity costs of ERP. The term “opportunity cost” is not used all that frequently on IT projects, so let’s define the term first before we explain how it can best be leveraged in decision making:

“In microeconomic theory, the opportunity cost of a choice is the value of the best alternative forgone, in a situation in which a choice needs to be made between several mutually exclusive alternatives given limited resources. Assuming the best choice is made, it is the ‘cost’ incurred by not enjoying the benefit that would be had by taking the second best choice available.” — Wikipedia

Costs are often described in general parlance as the amount that we pay for things. However, economists look at costs quite a bit differently. Promoters of ERP tend to present any benefits of ERP without acknowledging that the time and effort spent on the ERP project could have gone into other initiatives. The comparison should be between the gains from those systems versus the gains from ERP systems. Let’s take a simple example. Let’s imagine that I have no car. I have a hard time getting around town because I lack transportation. In order to improve my condition, I buy a tractor. After a week, I report that I am able to get around town much more efficiently, and compared to walking, am now much more mobile. With this background, have I established that the tractor was the best possible alternative? Obviously, I have not proved this. I could have purchased any number of cars, almost any of them with lower operating costs than a tractor. Tractors are great, but not a good choice for the purpose of traveling around town. Therefore, the question is not whether a tractor can improve mobility more than no other alternative device, but whether the purchase of the tractor improved my condition compared to the other alternatives (these alternatives could be a car, public transit, bicycle, etc.).

Does my argument about the evidence for why a tractor is the best vehicle sound silly? Well, it should, but it is no sillier, no less evidence-based, than the argument presented for why ERP has helped companies. Most fallacies in life—from fad diets to exercise machines seen on television to ineffective medical treatments—are essentially based upon anecdotal evidence with no supporting research. The comparison of something against nothing is one of the major ways in which individuals are led to false conclusions. The comparison can never be between “something” and “nothing,” but must be between two “somethings.” People who compare something to nothing are stacking the deck in favor of the “something” and are not promoting research or a logical and serious framework.17 A certain exercise cannot be compared against no exercise at all unless the intent of the study is to show the benefits of exercise versus inactivity. All tasks that are performed, all effort that is expended, all resources that are dispensed—everything can be expended and dispensed in a variety of ways.

The normal objective is to find the one best way. The direct costs of ERP systems have continued to rise because when companies give over so many modules to one vendor, they also give up a lot of negotiating power. The ERP vendors use their increased leverage in several ways. One way is to sell uncompetitive software in other areas in the same account. A second way is to increase the cost of the yearly support contract. Generally, the TCO of on-premises ERP systems is considered to be high compared to other application categories.

If this chapter has been surprising to you, you are not alone. When I first began researching the material for this chapter, I was unaware that every one of the proposed logics for the purchase and implementation of ERP systems would prove to not only be wrong but also spectacularly wrong. I was stunned that these amazing mental errors had not been reported in trade publications, as the lack of articles on these errors means that a multitude of actors has been misleading readers as to the benefits of ERP systems. I don’t necessarily believe that there was a nefarious motivation on the part of all the people who have written about ERP vendors over the years. Certainly, vendors and software companies have been writing marketing literature and have zero interest in printing the truth. However, many journalists lack research skills and instead simply repeat what they hear about ERP. Getting at the truth is why it is so important to perform actual research when making software selections, and this is true not only of the individual applications within a software category but of the software category itself. As an example, in the late 1990s many companies purchased marketplace services, classification of services that were introduced with great fanfare by both software vendors and IT analysts, as the following articles in the references discuss.

However, there was very little evidence that this trendy category—marketplace services—would work out. In fact, the only one that did was Covisint, but it is really only a shadow of what it was projected to be. That is interesting because I worked in a software company that promoted these “marketplaces,” and at the time they were pitched as the future of business-to-business commerce. These days there is a new software category that has no benefit other than allowing forecasting departments to falsify their forecast accuracy.