Client-server is not a good descriptor for on-premises servers, and it turns out that the term mainframe is also not a useful or descriptive term for what we call a mainframe computer. This is because the term comes from a large CPU cabinet that was within the enclosure. This is problematic as this has nothing to do with the design of a mainframe. It is more of a colloquialism that became codified into general usage rather than anything that explains how the computer is designed or the type of workloads it is good at processing.

To develop a more accurate term, let us look at what it is designed to do rather than what type of CPU cabinet it has.

A mainframe is a computer that is designed to meet the following design objectives:

Perhaps rather than “mainframe,” the term “RIOHB” computer would have been a more useful and descriptive term. This tells us what the computer is designed to do far better than the term “mainframe.”

Therefore a better terminology to logically differentiate between these two architectures is the RIOHB design (mainframe) versus the replicated standard configuration (RSC) hardware approach, referred to as “servers.” Both are centralized computing approaches. (see the table above) Although as they also work with personal computers that have their processing, they are also distributed methods. Therefore, the terms “distributed” and “centralized” are also a problem as, in reality, both types of processing occur except in unique circumstances.

Cloud services providers could run mainframes and provide services on mainframe “farms,” but they don’t. Instead, they run server (RSC) farms. There are particular reasons why they don’t do this, and this will be explained further in this chapter.

The debate between these two architectures has nothing to do with client-server, nothing to do with old versus new. Mainframes may be older in that the individual machines have a longer service life than do servers. The server’s average lifespan (depending upon the server type and other factors) is 3-5 years. The lifespan of mainframes is significantly longer, so yes, the average mainframe in use is older than the average server.

The debate between these two architectures has close to nothing to do with “old” versus “new,” and nearly everything to do with what approach is a better fit for various workloads. The benefits of cloud service providers are that the servers are aggregated and subject to scale economies. Web services can be managed by companies like AWS and Google Cloud that can share the management of services over huge customers. With the AWS RDS, AWS’s managed database service has enormous numbers of customers in single instances of RDS. On-premises software and hardware vendors have been focused on getting customers to have a high ratio between software licenses and hardware and users. The higher software and hardware vendors can make this ratio, the higher their revenues and profits.

Proprietary hardware vendors have known about the low utilization of their servers for many years but have done little to help customers increase this number. Likewise, the major commercial software vendors push for more and more shelfware purchases (in many cases coercing them through audits and other means). All of this is, in part, because wasteful purchases of shelfware and low usage servers are how sales reps meet their quota. However, cloud service providers focus on getting customers to rent their services, which means (at least in most cases) getting them to use their services. AWS or Google Cloud will take the extra money from underutilized compute instances like software vendors and proprietary hardware vendors. Still, with the transparency of the cloud, it is a bit more challenging to do so. And there is waste in the cloud also as the following graphic illustrates. 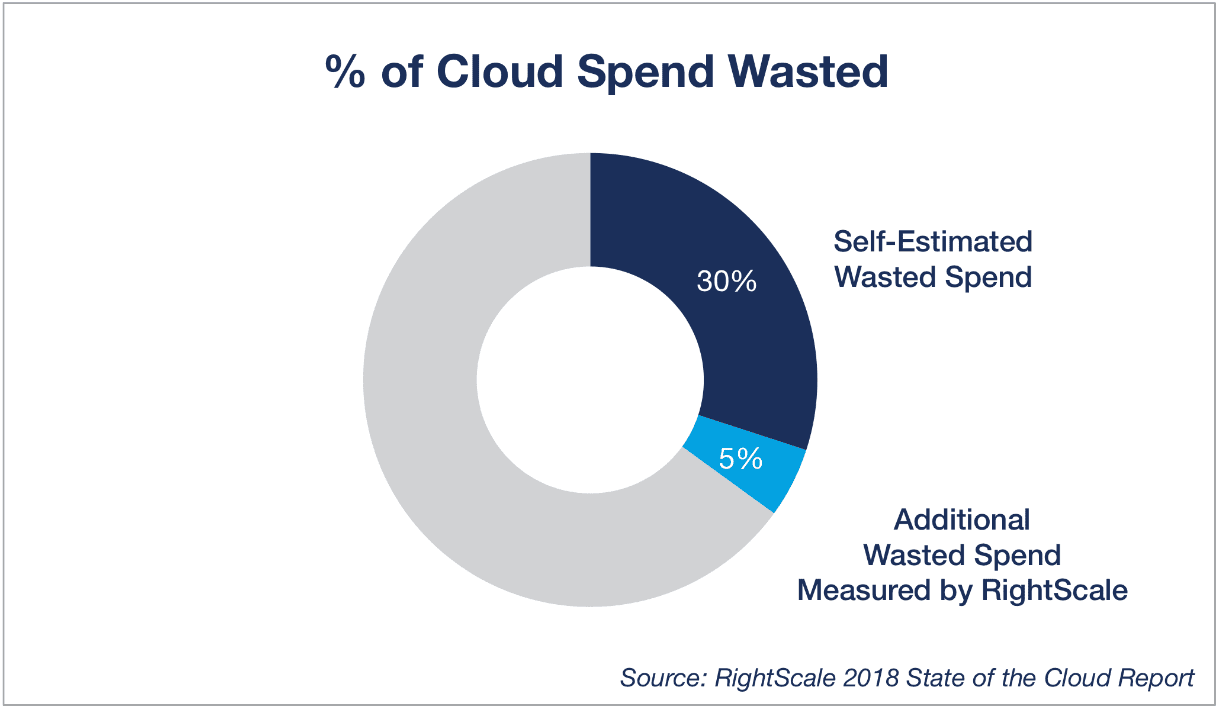 However, currently in on-premises managed IT environments, waste is at very high levels. And this does not discuss or include the consulting offered to manage on-premises hardware and software, another dominant leg in the stool of IT waste.

Therefore, scale economies are brought to hardware, but more importantly, software. There is no comparison to the software available on Google Cloud or AWS in any on-premises server environment in the world. There is no comparison between Google Cloud and AWS’s ability to manage its hardware assets versus the typical on-premises server environment. Moreover, this brings up the discussion of how the software and hardware market naturally changes over time. Let us go back several decades to look at how different the top hardware vendors are for the dominant “servers” of the day.

It is instructive to review the top mainframe vendors in the 1960s and 1970s. Notice the stop date of many of the hardware vendors below.

It is curious upon reviewing this list to realize that only IBM and Unisys remain today as either producer of mainframes or other hardware/server products, and with Unisys being more of a niche player. Many of these vendors ceased to be relevant in the computer space when they stopped manufacturing mainframes, which is now (on average) roughly 30+ years ago.

That topic is covered in the following quotation:

“In 1991, AT&T Corporation briefly owned NCR. During the same period, companies found that servers based on microcomputer designs could be deployed at a fraction of the acquisition price and offer local users much greater control over their own systems given the IT policies and practices at that time. Terminals used for interacting with mainframe systems were gradually replaced by personal computers. Consequently, demand plummeted and new mainframe installations were restricted mainly to financial services and government.”

Does that have an eerily familiar sound?

Yes, mainframe manufacturers were charging high prices to customers and receiving epic margins. In their heyday, some mainframe vendors, notably IBM, became extremely difficult to deal with. When lower cost and, in many ways, higher functionality alternatives presented themselves, mainframes went into a steep decline in terms of units sold (but not in terms of transactions processed or utilization, as we will see). A similar transition is happening today with on-premises hardware and software with cloud services. However, something that should moderate one’s 100% enthusiasm for the cloud is that the client-server could never replace mainframes for batch processing entirely. This is why mainframes continued to be used for batch processing-intensive applications commonly found in banking and insurance. Every time one checks a bank balance online, this is information provided by a mainframe. This issue very much impacts the cloud as well, as some applications are less prone to move to the cloud than other applications.

For decades mainframes have been presented in IT media as old technology. Mainframes are often used as an example of antiquated technology in literature and how one should move away from “mainframe ways of thinking.” However, certain mainframes are not old technology, and this framing does not distinguish the design of the mainframe versus the components and software used in a mainframe. This is inaccurate because we don’t apply the same thinking to other items in everyday life. For example, every car on the road is based on the Ford Model T design in both its physical properties (internal combustion engine, four wheels, steering wheel location, passenger seats, etc..) and mass production techniques). Still, we don’t ordinarily say that a new car is antiquated because the car’s design is based upon a physical and manufacturing design that goes back to 1908. We seem to be able to understand that the components are upgraded with the car. 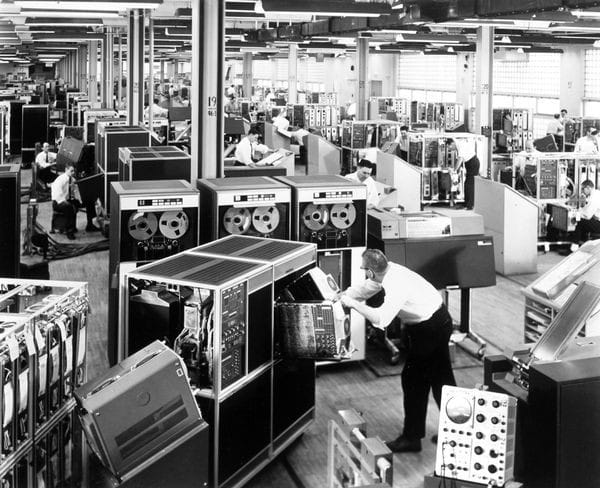 If you see this computer in your IT server room, talk to your doctor because you either found a time machine or are hallucinating. In the same way that it’s hard to find Model T’s driving around town, companies that use mainframes do not use an IBM 1401 mainframe from 1960. This should be an easy concept to get across but is lost on many people who can’t get over the original timestamp when mainframes were first introduced.

Although they last so long, they might be using a mainframe from the late 1990s. However, they could also be using one purchased in 2018 (or the year whenever you read this book).

The mainframe design has been around longer than the server design, but their first iterations are not measuring the mainframe or the server. Instead, we measure servers by their modern iterations. No one seems to ask companies why they are using a server design that goes back to the 1980s. New mainframes are constantly upgraded with the most up-to-date components, and older mainframes are upgradable. Furthermore, mainframes or RIOHBs are not based on the same core technologies as servers or RSCs.