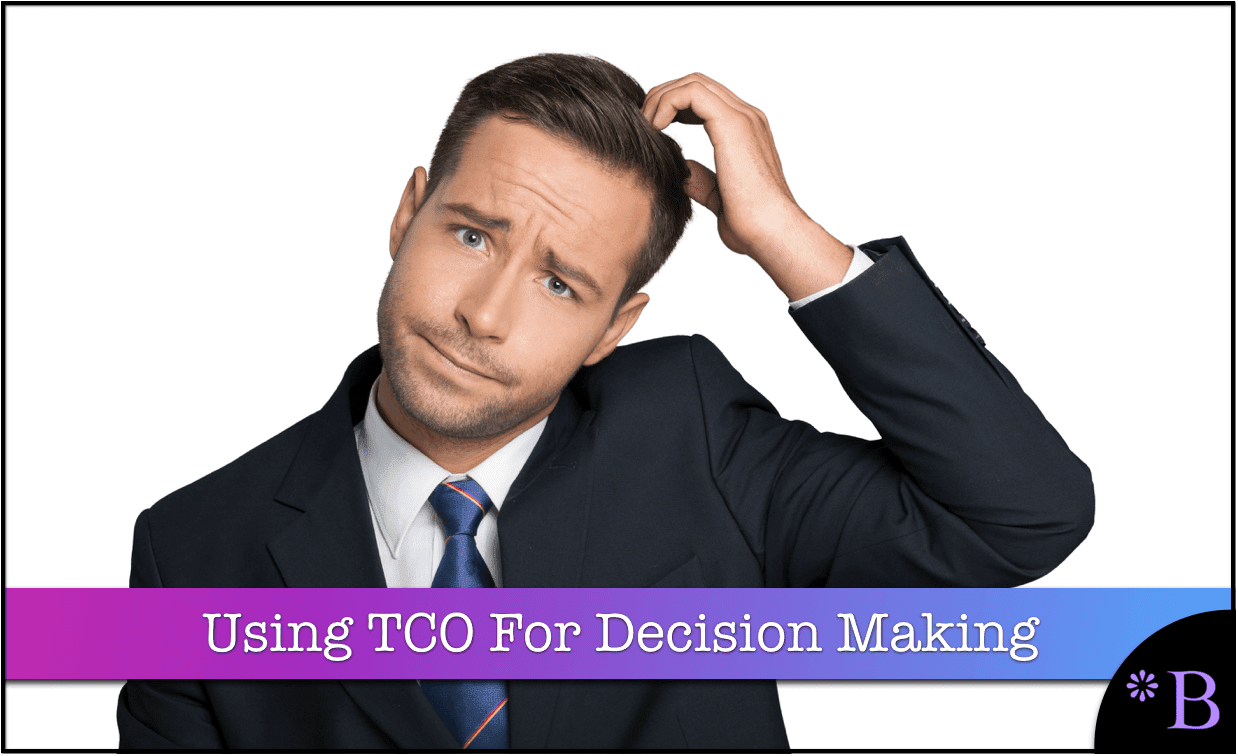 Developing TCO estimations is the difficult part. The more interesting part is actually using the TCO, as there many varied uses. TCO can be used specifically or generally. For instance, once one has a handle on TCO for an application area, the TCO can make future decisions after the purchase has been made. This is best explained with an example, and one came up while I was writing this book.

I was developing a proposal for an audit of an application that was already installed and live. This audit was designed to offer areas of improvement in the application. To provide some context, the following text was used on one of the slides from my proposal presentation:

“In software implementation, much of the focus is on the initial acquisition and the implementation. However, the measurement of optimal usage and received benefits can be a tricky proposition. To do this requires seeing the application in a variety of environments, and comparing the configuration and planning the outcomes. The audit provides important feedback toward the software implementation’s current usage and potential areas of improvement.

1. Some functionality may not be working exactly as desired.
2. An unknown feeling as to how much and/or well the investment in the application is being leveraged.
3. Issues with, or concerns that, the application may not be optimally integrated (both technically and process–wise) to the other applications in the company.”

Many companies are interested in such an audit if produced by an objective source. However, the question of the price eventually comes up, and while a consulting rate can be fiddled with, the biggest issue is the duration of the audit project. Previous audits/evaluations I had performed typically ranged from one week to three weeks. However, those who wanted a shorter audit based their logic upon the idea that the cost would be too high, as the audit would cost between $12,832 and $14,560. There was no way that some of the companies that had spent roughly $100,000 for both the software and the implementation (this was inexpensive enterprise software) would be willing to spend what could be close to $15,000 for an audit—or what amounted to fifteen percent of the total cost of the software and implementation.

Overfocusing on the Software License 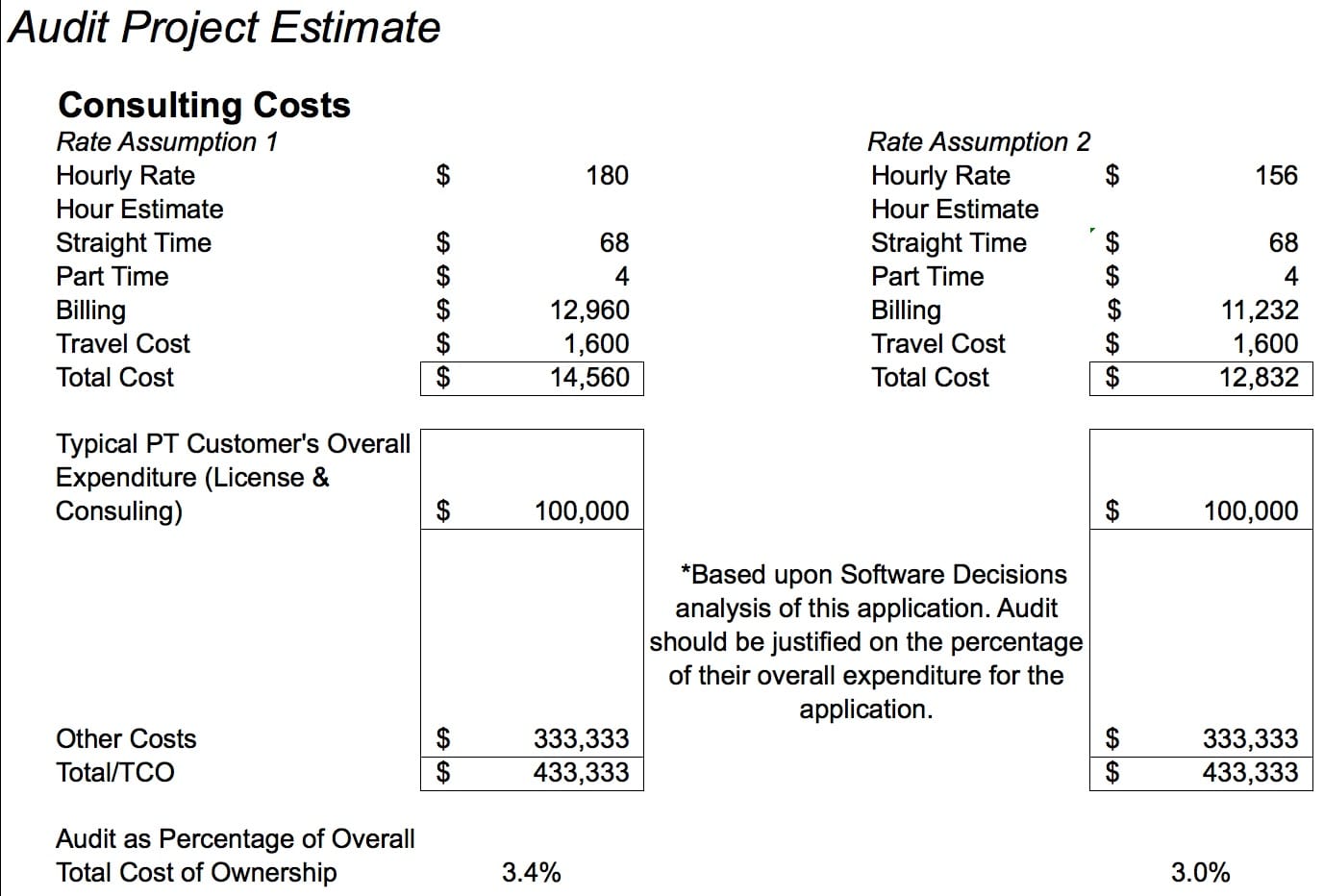 This analysis does not seem as if the company should be so concerned about the audit’s cost. An audit’s cost is not fifteen percent of the customer’s cost but would be between 3% and 3.4% of its TCO application. This is a far more logical context within which to decide between seeking advice about a solution. Of course, this says nothing about the audit quality; this TCO analysis provides a context to perform the cost-benefit analysis.

The Results of an Audit

The audit can provide good results or bad results depending upon the individuals’ knowledge level and incentives performing the audit. After TCO is developed, it can support decision-making in various ways, as shown in the example above. Companies should really have TCO analyses performed for all of their applications. It is quite common for companies to make decisions to extend the use of their ERP system in some area, usually functionality that is known to be mediocre; however, the decision is driven by the desire to “get more value from our ERP system” or to “leverage our ERP investment.” These can seem like desirable goals until one begins to look through the lens of TCO. When executives state that they want to leverage ERP by utilizing more of that ERP system’s functionality, exactly what is being leveraged should be understood. In fact, the only thing that is being leveraged is the software license fee, possibly some hardware cost and support fee—but not the implementation costs, some of the hardware cost, and not overall maintenance cost.

However, if the hardware cost is taken at a fifty percent value (which either way is a minor portion of the TCO), then the average costs for the license fee, hardware costs, and the support fee across a wide variety of applications come to roughly fifteen percent of the TCO of any new application implementation. And this means not using an application, which would win in a software selection. Rather this is simply using the application that happens to be “around.”

Overall, “leveraging” any current software, be it ERP or other software that the company owns, will not typically save the company more than fifteen percent of the TCO of the functionality in that area. Depending upon the situation, there can be more integration costs. However, while the company saves roughly fifteen percent on the TCO of the new functionality/application, making this decision will, in most cases, greatly reduce the ROI of the initiative.

How easy is it to reduce the ROI on a software project by at least fifteen percent? By using software that is not particularly adept in an area compared to competing options, not only is it easy—it is almost assured. According to statistics commonly quoted, software implementations have a roughly fifty percent success rate, depending on how the survey question is asked. By our estimates, this is too high, for several good reasons. Some companies that deem the solution to be a success do not know the software area well enough to know how little the application offers over previous approaches to solving the same problem. I can recall several projects off the top of my head where the application does tiny to improve on the previous solution. Still, that truth is hidden from the client by the consulting company or their own IT department. The business users know, but the executives—who mostly fill out the success/failure questionnaires—would not know.

So, trying to save fifteen percent on the cost of the implementation with absolutely no consideration for the potential ROI (which is the dominant approach to software selection and decision making in US companies) is one of many factors that keep the success rate of IT implementations so low, and probably lower than the commonly quoted statistics would lead one to believe. In fact, with IT implementations as risky as they are, the implementing company needs every possible advantage it can get, and trying to save fifteen percent in what is just one category of costs is not the way to do it. Choosing the best application for the job is the first step in increasing the likelihood of a project’s success.

The End Result of Not Using TCO to Inform Decision Making

Deciding to leverage what is “already purchased” (a misleading term as it should be rephrased as leveraging what is “already fifteen percent purchased”) will most often mean taking a major hit in functionality and in the ability of the users to perform the activities in the system that the company is asking them to perform. Furthermore, this line of thinking assumes that all other costs—that is, the other eighty-five percent of costs—are roughly equivalent. However, they are anything but equivalent. On a direct functionality-to-functionality basis, ERP systems are the most expensive systems to implement and to maintain. The TCO studies demonstrate this at Brightwork Research & Analysis. ERP systems are almost always combined with customization; estimates ranging from 87 to 93% of ERP implementations have moderate to extensive customization.

This customization lengthens the implementation timeline, resulting in increased implementation costs and higher long-term maintenance costs. This is a primary reason why so many companies had continued to implement uncompetitive functionality in their ERP systems when so many better solutions were available in the marketplace. They are attempting to utilize their pre-existing investment in their ERP system. However, our research demonstrates faulty logic as companies can only expect to save 12.5% of the application’s TCO by leveraging a previously implemented ERP system’s sunk cost. Other applications specifically designed to meet business requirements (aka best of breed) have better ratings in various compensating criteria. Because of this, it is a simple matter to exceed these cost savings with an increased likelihood of the following:

TCO calculations can be used to improve decision making. Making decisions without an honest TCO calculation and estimate is like flying blind. Both consulting companies and software vendors want their customers to stay as far away from TCO estimation as possible. This allows customers to be moved to the highest TCO solutions, benefitting consulting companies, and software vendors the most.