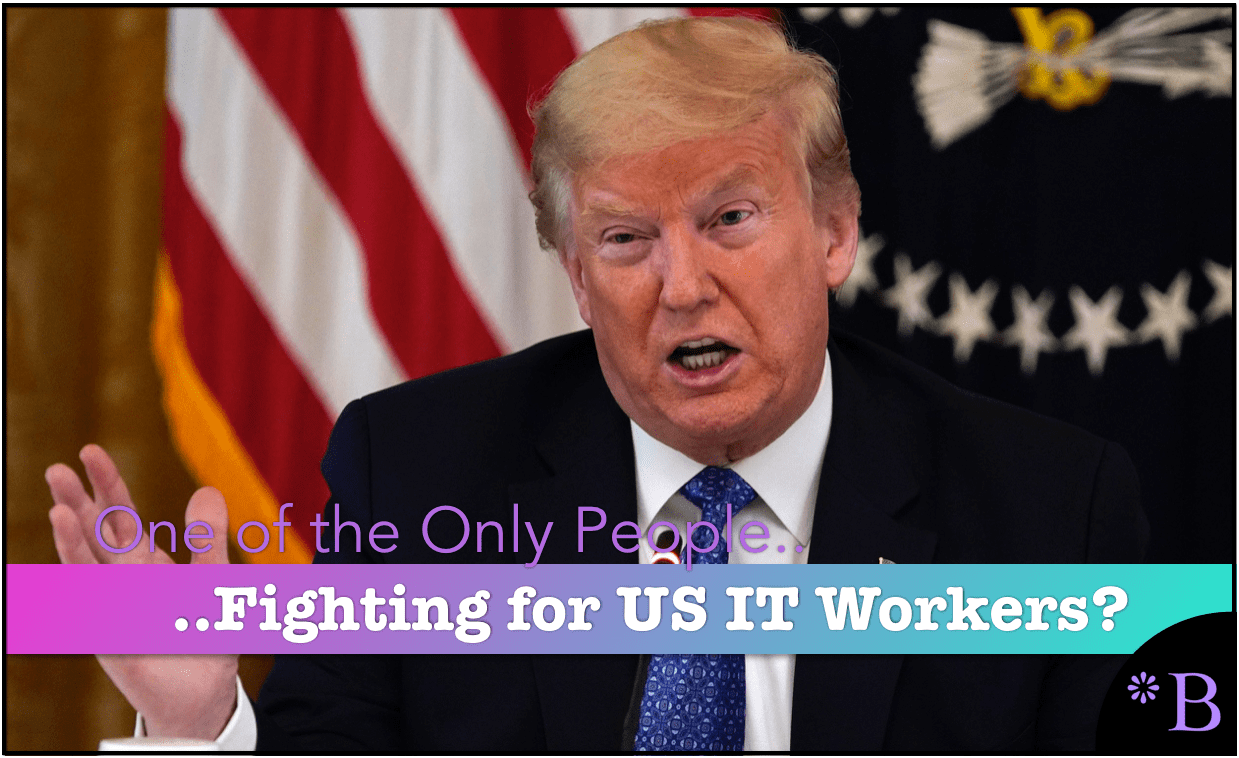 Amazingly, even with Coronavirus, there have been howls of Indians and the H1-B visa lobby.

Virtually all of the media has come out against these restrictions, even though it is behind the debate that both H1-B visas and foreign worker visas are generally negatively impacting domestic US workers, as we cover in the article How Flooding of the H1-B Visa Program is Commoditizing Technical Labor.

The official justifications for these policies are the prevention of the spread of the coronavirus pandemic and the protection of American workers from wage competition. Neither rationale can justify such a sweeping restriction on immigration. Even more troubling, the order is a large-scale executive-branch power grab that sets a dangerous precedent. It makes a mockery of conservative jurists’ insistence that there are constitutional limits to the amount of authority Congress can delegate to the executive. – The Atlantic

This is the typical type of article written on this topic. The author does not bring up the fact that enlargements to the H1-B visa program are passed in secret with massive industry lobbying as we cover in the article Why Are 47 Entities Lobbying in Favor of the H.R.1044 IT Immigration Bill?

That, according to the author, is perfectly fine. The fact that the Department of Labor does nothing to oversee the program for false information provided by Indians or those that sponsor Indians as we cover in the article How the US Department of Labor is Useless in Policing The H1-B Program.

Among the victims are American citizens who have already waited years to be reunited with relatives who are now trapped abroad. While the measure exempts spouses and children of U.S. citizens (if the children are under the age of 21), it still bars siblings, parents, and other relatives. The administration has compounded the injustice by blocking almost all asylum applications from refugees trying to cross the border, despite the fact that such a measure violates both American and international law, which forbid the expulsion of refugees facing persecution based on race, religion, political opinions, and other similar categories in their countries of origin. – The Atlantic

This is the angle used — an appeal to compassion. However, something that The Atlantic, New York Times, Washington Post, or any of the other major media outlets do not have is compassion for US domestic workers. In terms of asylum seekers, there is mass fraud in the asylum applications as well. Increasingly, “asylum” simply means one does not currently live in a white country. Immigration lawyers now train new immigrants to apply for asylum, regardless of whether they are actual refugees or not. Immigration attorneys don’t care whether these immigrants will fit in with the culture, or if they will clash with the existing citizens, immigration attorneys just care about getting paid. The cultures that these new arrivals come from are perfectly comfortable lying to gain entry, and immigration attorneys are very comfortable telling them how to lie. Indians aggressively lie to gain entry into white countries.

Asylum has become a scam. The vast majority of those that apply for asylum are simply looking for a “country upgrade.” At this point, virtually any disturbance or desire to find better economic opportunity becomes political asylum.

Notice, Vox, another progressive outlet, that again takes the side of the large importation of non-whites into the US. Nearly every single media outlet takes the same view. Once in the US, Latin Americans immediately being having babies. Indians also have babies extremely quickly as their children are US citizens and therefore anchor babies. Latin American have many more. Latin America is extremely overpopulated — leading in great part to their problems. They are repeating the same pattern that caused them to have to migrate, and do not see the pattern themselves.

This massive influx is changing the country to the degree that immigrants now consider is insulting to be told to speak English in public places.

Yes, it is offensive. Modern immigrants expect to be able to keep their own language and to treat those that would ask them to speak English with hostility. If this is not apparent that the entire construct of immigration is changing, nothing else can describe it. There are now large swaths of the US that do not use English and are not expected to use English.

A 14-day quarantine may be a deal breaker for tourists. But for immigrants, it is a small price to pay for the chance to live in a society that offers greater freedom and opportunity. And unlike migration restrictions, a regime of free migration with some targeted quarantine measures does not create a large population of undocumented immigrants, who in turn have strong incentives to avoid testing for the coronavirus, thereby facilitating the disease’s spread. – The Atlantic

Why Not Just Open All White Countries to Unlimited Non-White Immigration?

Yes, if the US wanted to, or any white country wanted to, they could allow themselves to be overrun with non-white immigrants. However, only 10% of the global population is white. Most of the developed world would jump at the opportunity to immigrate to the US. India has an overwhelming population problem.

Overpopulation is the biggest problem in non-white countries, and this problem is only getting worse. These countries accessed white medical advancements that reduced infant mortality, but they did not modify their reproductive rates. India went from 350 million in 1947 (at independence) to between 1.3 and 1.5 billion (they do not have precise figures — and the Muslim population is known to underreport their numbers). These people desire to leave their countries, with most thinking their countries cannot be saved. They have given up on developing their own countries and desire a soft landing in a white country.

Understanding this would mean understanding developmental history and ecology, but don’t worry, because The Atlantic would never have a person who understands these topics write for them on this issue.

The author for the Atlantic is I assume too busy cashing checks from the H1-B lobby and telling us the sky will fall if we for the slightest moment question how many foreign workers are coming into the country.

Immigrants Contribute More to Health Care and Innovation Than US Citizens?

Severe restrictions on migration actually damage public health in the long run. Immigrants contribute disproportionately to medical care and innovation. The Trump order includes an exemption for current medical professionals, but not for scientists or those who might become medical workers after entering the country. – The Atlantic

Mexican immigrants most definitely consume far more health care services than they provide. Mexicans infuse Emergency Rooms and use them as a clinic — and these costs are then passed on to taxpayers.

Innovation is not higher in immigrant groups — this is a myth created by pro-immigration entities. Furthermore, the US already has far too many scientists. They are being driven out of STEM due to low-cost immigration, as we cover in the article How The H1-Bs Are Pushing Out Domestic US Workers of IT and STEM.

If the US is less innovative than its immigrants — then why do these immigrants want to come here? The US achieved technological preeminence in the 1960s — back when immigration was quite low.

Increasing Supply Does not Reduce Prices?

The wage-competition rationale for the new policy is equally specious. Economists consistently find that most Americans’ wages actually benefit from immigrant labor. That is the case even during times of severe recession and unemployment, such as the present. A study by the National Bureau of Economic Research found that the mass deportation of Mexican workers during the Great Depression did not result in increased wages for American workers, and may even have lowered them. Far from helping American workers, barring immigrants is likely to make the economy less productive. The recent expansion of Trump’s immigration ban to cover a wide range of work visas will damage the economy further, particularly by reducing innovation, to which H1-B-visa recipients are important contributors. – The Atlantic

Most economists work for elite interests — and their research conclusions are not reliable. But there is a not very complicated analysis as to what happens with increased supply. And that is if the supply of labor is increased, this reduces the value and wage of that labor. The supply of Mexican labor, for example, is well known to have significantly brought down the wages in Los Angeles in construction.

This author is arguing against supply and demand.

Who is the Author — And Who Are Authors Generally That Write on H1-B?

The author of this article is Professor of Law at George Mason University who has never worked in IT, will never work in IT, and has no idea of how Indians discriminate and create a hostile work environment for US domestic workers. This professor in his ivory tower writing about things he has never experienced and potentially living off of H1-B lobby contributions does now know what a terrible experience it is to work with Indians. I have observed that media entities do a terrible job of checking guest authors for conflicts of interest. Therefore, the reader ends up with no idea how the article is connected to off-record financial contributions.

Does this professor know anything about the corruption in Indian society or the corruption that Indians bring to the US? Why anyone would listen to an attorney about IT, working with Indians, economics, labor markets, or any of the items in his article (except for the legal analysis of what Trump did) is beyond me.

What is clear is that The Atlantic, which is a progressive web site, allows people to write for them that oppose the interests of US domestic IT workers.

The push for more foreign labor and to worsen the condition of US domestic IT workers is intense. Either hundreds of thousands of Indian IT workers must be brought in every year — without stopping, or these types of articles begin to appear. They are almost always written by people without any experience in IT or any experience working with Indians. In fact, a very high percentage of articles on H1-B visas and foreign worker programs are written by two types of people.

This brings up the question of why The Atlantic and so many other prominent media entities have individuals who author articles on H1-B and Indians IT workers who have no idea what they are talking about. These are people who also have never touched technology beyond email and Word, who explain to me what drives innovation. It should be quite obvious that if we are listening to attorneys what drives innovation, or how the IT workplace or IT market functions — we probably should not listen to them.