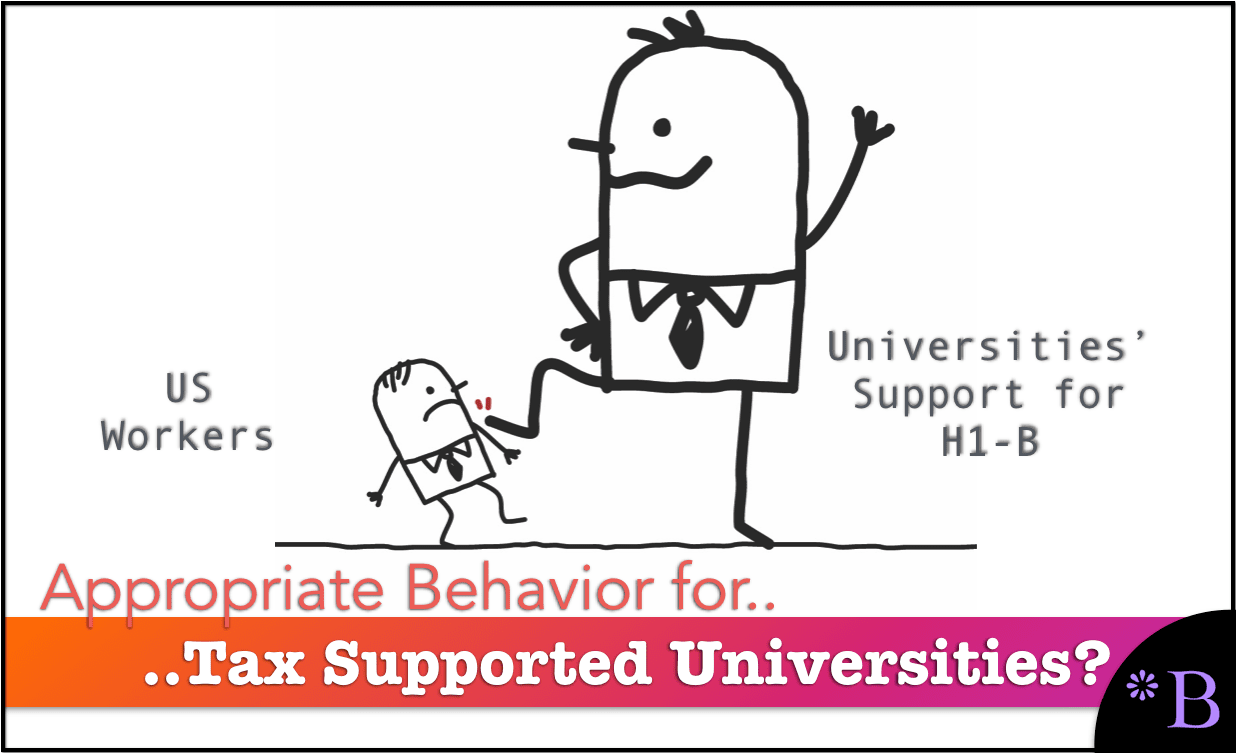 Universities, which have charters to educate the local population and a related charter to improve the condition of their areas, decided to take a position on H1-Bs that would make it more difficult for their graduates. And for other US citizens to get jobs, combined with decreasing their own cost of labor.

In addition, academia actively supported the industry’s claims of a shortage, as well as the industry’s demands that Congress expand the H-1B program.47

The universities had very strong incentives to back industry on the shortage and H-1B issues: Universities receive large donations from the industry;48 universities hoped to get increased government funding for science and engineering programs to cope with the labor “shortage”; many university postgraduate programs are populated largely by foreign students who hope to later work as H-1Bs in the U.S.; and the universities are major employers of H-1Bs themselves. – University of Michigan Journal of Law Reform

As we cover in the article How The H1-Bs Are Pushing Out Domestic US Workers of IT and STEM, and the article How Industry Lobbyists Make False Claims Around US Skills to Justify Cheap H1-Bs, claims proposed by the H1-B lobby are false. The “shortage” of STEM-educated workers versus demand is a false claim and merely used to justify the continual expansion of the H1-B program. Universities would have or should have known (if they had read the academic research on this topic) that H1-B and other foreign visa programs have caused a large scale switch in careers for US domestic educated STEM graduates.

However, rather than acknowledging this, rather than following through on their charter, they aligned with multinational companies that crave low wages to support H1-B expansion.

Explaining the Motivation for Foreign Students to Study STEM

The following is from Kevin Lynn of US Tech Workers.

Earlier this week, an article in Axios, College International Student Enrollments Plunge, caught my eye. The author related that:

“The big picture: U.S. colleges rely heavily on international students for their full tuition dollars and research prestige – most STEM programs have a majority of these students. Universities have already lost several revenue sources through athletics and housing. * The American Council on Education estimated a 25 percent decline of international student enrollment this fall and a $25 billion revenue loss for education institutions.

* Schools don’t have an official count yet for their fall enrollments, but many say their international students have deferred until the spring.”
The article closed with:

“The bottom line: Educational institutions were already in a fragile state before the pandemic. Now this potential exodus endangers their pockets and prestige.”

Hrmm, prestige you say? Hardly! What colleges are bemoaning is not a loss of prestige, rather a direct hit to their bottom lines that these foreign students represent.

I’ve said it before, and I will say it again: Our higher education system is a racket! In much the same way corporate America is hooked on cheap labor that comes through employment visa programs like H-2A, H-2B, H-1B and the L-1, universities are hooked on foreign students coming in through the F-1 student visa program.(emphasis added)

You read above where the loss of international students represents a $25 billion hit to our colleges and universities. Also mentioned was “most STEM programs have a majority of these students.”

I used to ponder why there were so many foreign students in STEM (Science, Technology, Engineering and Math). Is it that Americans are dumber when it comes to math? Or, perhaps it’s just that Americans would rather take up less lucrative careers in non-STEM fields? I think not. Let me posit that so many foreign students in STEM has less to do with acumen than it does a perverse incentive for international students to study STEM.

Let’s just say you wanted to immigrate to America and chart a path that would eventually lead to citizenship. How would you do it?

Well, you could enroll in an advanced degree STEM program at an American university. Then, upon graduation, be granted an optional practical training (OPT) work permit and work anywhere in America for three years. Then you could ask the company you are working for to sponsor you for an H-1B visa which is a dual-intent visa. The dual intent opens up the possibility of your employer sponsoring you for the much-coveted “GREEN CARD.” And voila! You’re on your way to becoming a citizen.

For some, that could almost be worth paying the full freight at Miskatonic University and maybe even spending a few harrowing years working as a post-doc in a lab at a research school. As we have all come to know, Principal Investigators (PI) love exploitable labor as much as the folks at Disney. As Nature magazine reported:

“The following was said to the study’s authors by a postdoc at a leading US university: ‘When I arrived at [the university] my PI explained to me that he approved my visa renewal … he then told me he was going to pay me 70 percent of the salary he promised before I got here … when I asked him if this is normal, he just asked me if I was serious about working [at the university].’”

And this came from another:

“Our PI creates this pressure cooker environment in our lab … you see the foreign postdocs sleeping on the floor of the labs, working 100-plus hours a week … PIs know what they are doing … they take advantage of these guys.”

If you think universities are screaming now, just wait until the OPT program disappears. Yes, it will mean a loss of revenue. But it will be an opportunity for them to right-size their program and price a degree so it is in students’ reach. And, the amount invested in an education will lead to a good upper middle-class life and not the poor house.

This will be the natural consequence of more billets in STEM programs and more job opportunities, like working as a postdoc in the lab of the university you just graduated from, opening up to citizens. That is what one calls a virtuous cycle, and America will benefit from this.

The corruption on the part of some high-level university faculty is shocking. Why does the University of Washington continue to receive taxpayer funds if they have been bought off by Boeing, Microsoft and others?

The web page of the Computer Science Department at the University of Washington, a leading supporter of industry’s labor shortage claims, showed the following as of March 16, 2000: $1,500,000 from Ford Motor Co. in research funds; “several million dollars” in equipment from Intel; $500,000 from Boeing for an endowed faculty chair; another $500,000 chair from Microsoft; another chair from Boeing; and finally, $3,000,000 from the Bill and Melinda Gates Foundation for two endowed chairs. See http:// www.cs.washingtion.edu/affilates/corporate (last visited Aug. 22, 2003). Department chair Ed Lazowska, who has been an outspoken supporter of the H-1B program, personally benefits financially from a cozy relationship with industry too. According to his personal web page, at http://www.lazowska.cs.washington.edu (last visited Aug. 22, 2003), he is “a member of the Technical Advisory Boards for Microsoft Research, Voyager Capital, Ignition, Frazier Technology Ventures, Madrona Venture Group, and Impinj, and of the Boards of Directors of Data I/O Corporation and Lguide.com.” – University of Michigan Journal of Law Reform

What was that about Bill Gates is all about charity? Did these payoffs get allocated as a charitable donation under the Bill and Melinda Gates Foundation? Would they have right? However, they are nothing more than bribes to get the University of Washington on board with their agenda.

Universities have been perpetuating several lies to the population. One is that education is the only way to have a better life. This is contradicted by the evidence that real wages in the US have gone nowhere since 1973, while education has significantly increased. At the same time, the percentage of labor unions during this time has decreased as we cover in the article Why the Gender Pay Gap is Discussed But Not Overall Pay Gap.

Now universities have added on to this false proposal by supporting the false industry claims around a skill shortage, all so that the universities can benefit themselves with more cheap labor through student visas and H1-B visas, and continue to receive corrupt funding from multinationals.