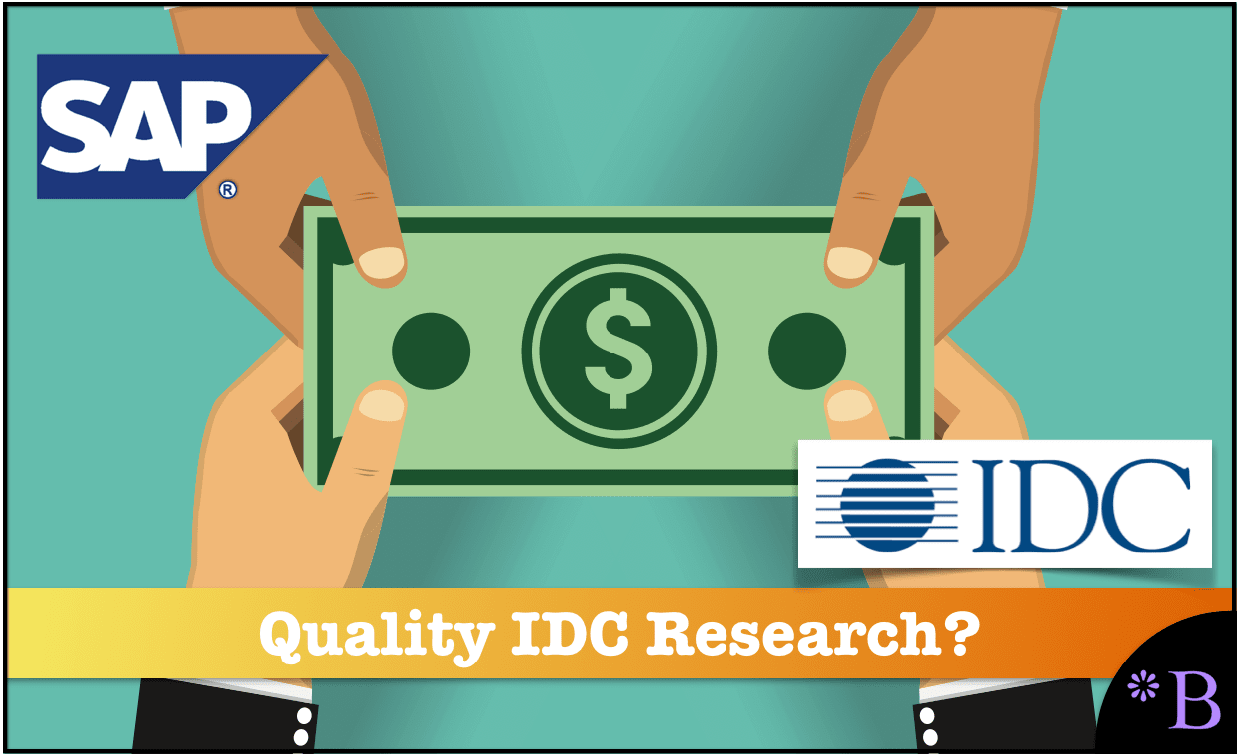 SAP has a problem. S/4HANA’s uptake has been atrocious. Luckily, SAP has a lot of money, and any IT analyst entities will publish whatever SAP wants for money. We covered the atrocious SAP sponsored research performed by Forrester in the article How Accurate Was The Forrester TCO Study? In the article How Accurate Was Forrester’s Study on the ROI of SuccessFactors? Both studies are inaccurate, and SAP resources have had to squirm around to try to defend them. SAP resources can never call out something as false if it is sponsored by SAP because SAP resources don’t care what is true. They care about what promoted SAP. One SAP resource tried to defend Forrester’s conclusion that a typical S/4HANA implementation could cost $877,000. There is no limit to what you can justify when one is trying to suck SAP’s ankles.

It is challenging to call this research. But let us review the numbers in what IDC calls a “survey.”

The 300 participants were IT and LOB executives from the C-level to the manager level. The participants spanned 10 countries covering three regions, from organizations with 1,000-25,000 employees across a multitude of industries and were either planning to deploy (73%), have in production (9%) or currently deploying (18%) SAP S/4HANA.”

What is the apparent problem with this survey?

What Could Be the Problem with the Sample?

The sample was provided by SAP, which is also paying for the survey.

This is the same issue with the ASUG’s survey on S/4HANA, which we analyzed in the article How Accurate Was ASUG on its S/4HANA Poll?

The problem is that SAP is providing the sample. In the case of Forrester’s study into S/4HANA implementations, SAP provided exactly 3 case studies. SAP claimed to have 3,500 live customers on S/4HANA but could only spare three case studies for Forrester to analyze. This is how SAP rigs every sponsored research that it funds. It merely provides an entirely unrepresentative sample to the IT analyst firm.

If the sample is not representative of the population, then none of the study results have any meaning. SAP has thousands of SAP customers to provide to IDC. By taking a subset of this population that is the most amenable to S/4HANA, the conclusion looks entirely different from the actual population.

As a comparison, let us say we took money to publish a survey from Oracle on Oracle satisfaction. And we were provided with the information of 300 of Oracle’s most happy customers. And we then published that the sample of 300 customers demonstrated that 98% of the customers were delighted with Oracle?

What would we have proved?

The answer is nothing, and in fact, we could not even be said to have performed a survey because the vendor entirely controlled the sample.

Are We All About Math and Science?

As a side note, there has been this long-term emphasis on math and science education in the US. However, none of this is observable in the outcomes. Roughly 1/2 of the US population does not believe in global warming/climate change. Still, around 38% of the population believes in creationism. We are in the thrall of an enormous AI/ML bubble that is firmly based upon not understanding the mathematics of AI/ML, and we repeatedly read polls/surveys where the sample is not randomized, and worse, rigged. No math has any meaning if the intent is to rig the results, which are IDC and SAP.

Combining a Survey with Promotional Information Courtesy of SAP?

The IDC survey does not stop at just publishing the results of the rigged sample. It places straight marketing documentation from SAP right into the document.

Wait….what does this have to do with the survey? Can’t SAP marketing control itself? This makes the “survey” look even more like a rigged propaganda piece than it already is.

A Perfect Time….to the Review the Benefits of S/4HANA?

Its time to move on to the part of any survey, the benefits of the item? 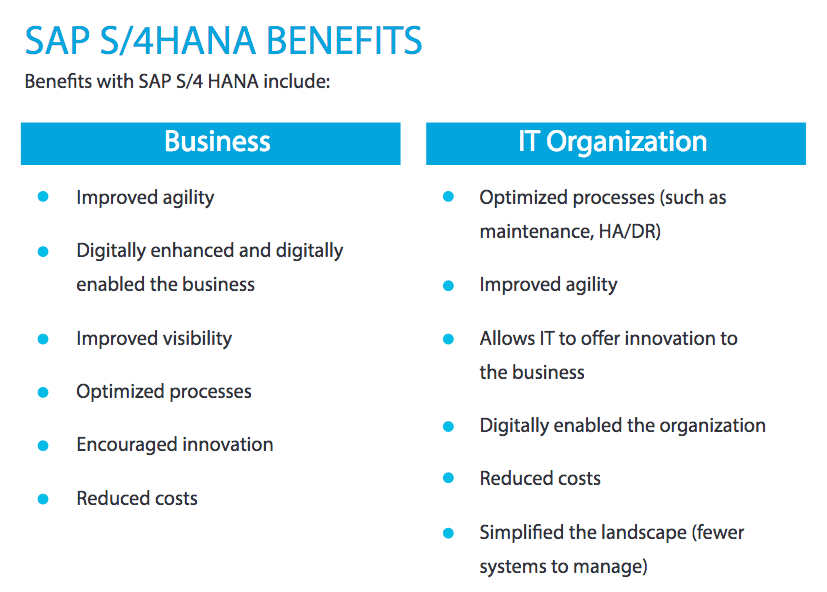 If IDC is saying this is true, how did they come to this determination? Because there is nothing listed that supports why these things are right. S/4HANA reduces costs? How. Most S/4HANA implementations will be over an existing ECC implementation. Will S/4HANA mitigate the costs of an already functioning ECC implementation? IDC’s statements open a large number of questions.

If this is just provided by SAP and has not been fact-checked, it should not be included in the survey. Also, what does any of this have to do with the study? Is this a survey regarding future S/4HANA adoption or a paper that describes S/4HANA’s benefits as defined by SAP?

SAP published how great this survey was on their website. 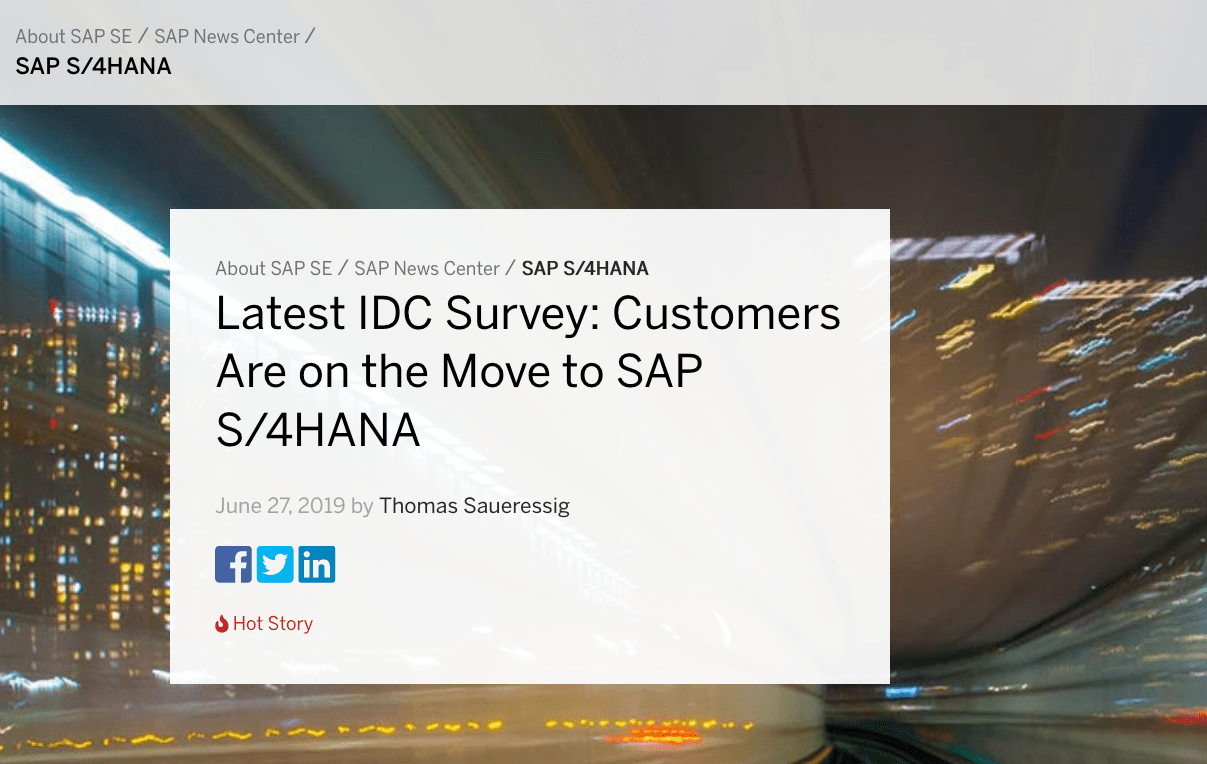 Isn’t this a bit circular? SAP is announcing positive results of a study they paid for, and for which they provided all of the samples?

This brings up the question of who is this designed to fool. Are there, in fact, idiots who won’t see through this and say, “Wow, S/4HANA adoption is going to increase?”

Much like the labels on bleach that say “Do Not Drink,” the only reason the label is there is because someone thought they would try to see what bleach tastes. As with all of SAP’s sponsored research, it requires some idiot label. 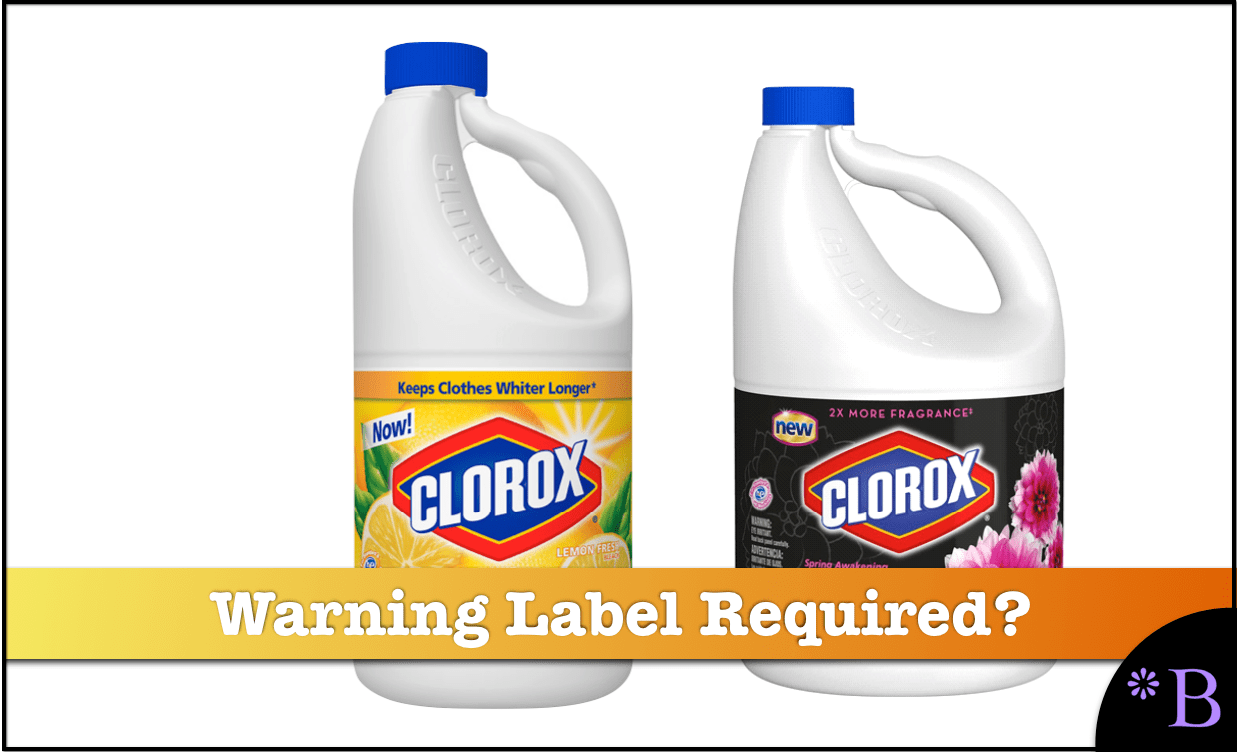 Is a warning label the primary thing standing between you and adding Clorox to your martini?

If so, SAP sponsored research is for you. IDC, Forrester, and Gartner are all open for business when it comes to sponsored research and publishing falsified numbers based upon data that you provide to them. SAP and SAP resources refer to this as “solid research.”

Since S/4HANA was first introduced, every entity connected to SAP has been wildly inaccurate in its predictions around S/4HANA. ASUG, Accenture, Forrester, etc.. All the biggest names in the SAP area have provided the most erroneous information around S/4HANA. There have been a virtually unlimited number of articles from financially biased sources that have no other objective than to pump up S/4HANA sales and implementations, as one can review by analyzing the prediction history of just one of these providers in the article The Chalfen Accuracy Checker: A Study into Mark Chalfen’s Accuracy on S/4HANA.

This falsified study by IDC is just another example.