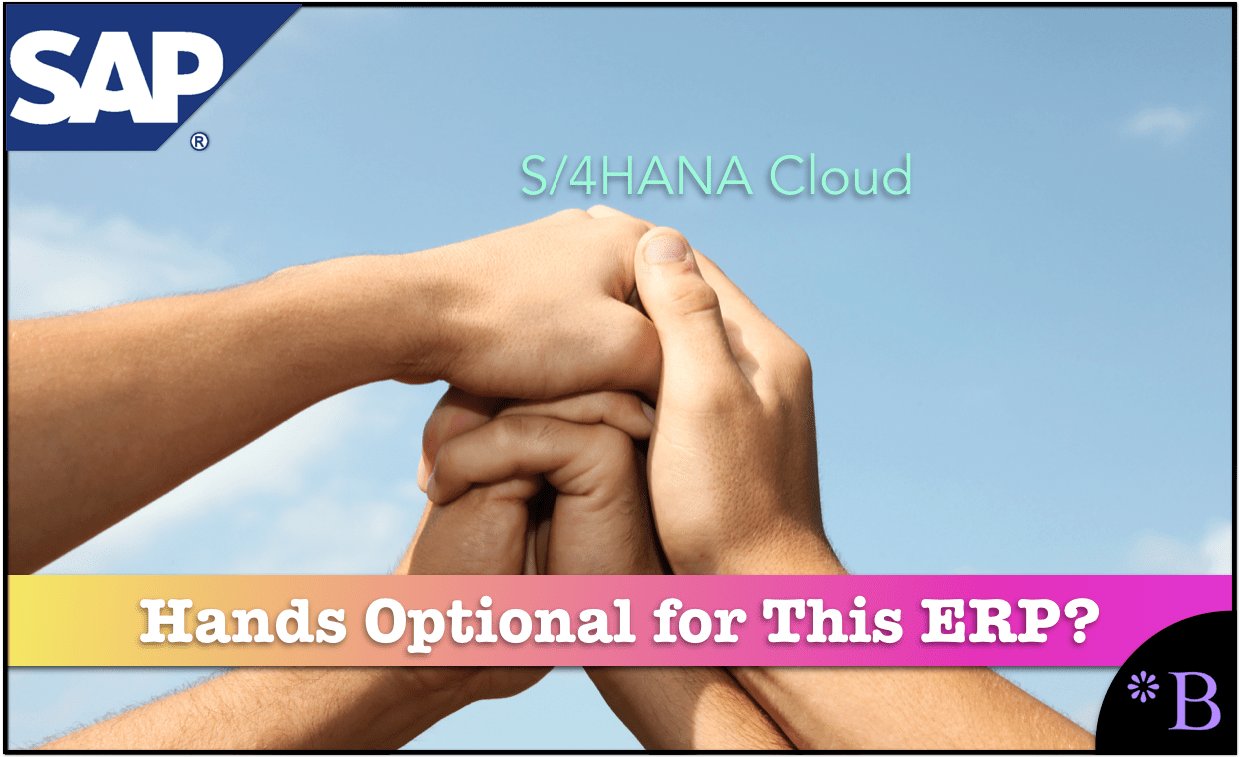 SAP has a long tradition of making its software sound much easier to implement and use than it actually is. A perfect example of this is the Run Simple program that we covered in the article What is the Real Story with SAP’s Run Simple?, or SAP’s RDS methodology? How Accurate Was SAP About Rapid Deployment Solutions Speeding Implementations? In each case, these were short term marketing illusions that had nothing to do with anything real, but we’re used to selling more SAP based on false claims. SAP did this again by proposing that their ERP system was not, which would mean it was 100% automated. You will learn about our evaluation of the accuracy of SAP on this claim.

Now SAP has given us and new simplification claim to evaluate, the so-called “hands free claim around S/4HANA.” 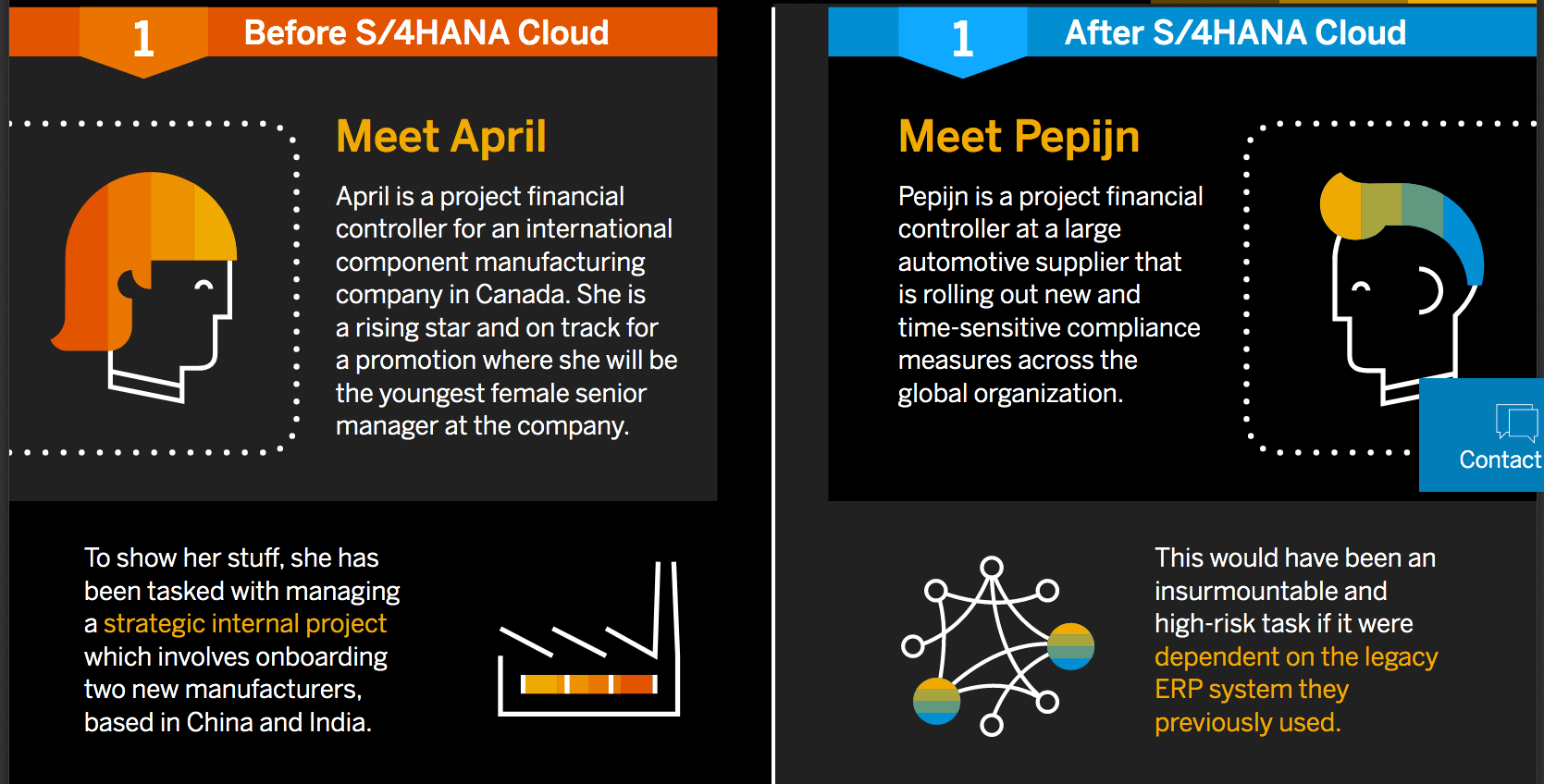 SAP’s hands free claim has to do with before and after snapshots. 1/2 of this scenario seems to have more do with faux female empowerment than anything to do with the S/4HANA software. What is the relevance of the user being a “rising star” or being on track “for a promotion? The system implication is that she has to manage a project.

As for Pepijn (no word on his objectives in life) the fact that time sensitive compliance measures are to be rolled out does not tell the reader very much speci. We would have to take SAP’s word because the risk would have been impossible without S/4HANA. However, SAP routinely calls any software that is not their software legacy as we cover in the article How SAP Used and Abused the Term Legacy.

Back to April, she she did not get the numbers — but why would she be using an ERP system to perform financial forecasting in the first place? The vast majority of financial forecasts are performed spreadsheets, not ERP systems. She appears to be less qualified for that big promotion, as she should know this at this point in her career.

Back to Pepijn, why S/4HANA Cloud is such a differentiator regarding seeing project data worldwide is not clear. Most ERP systems can do this. Secondly, having worked in many companies, I can attest to the fact that access to information does not directly translate to better decision making. SAP routinely makes this claim as if the relationship is entirely direct. For example, if access to nutrition information leads to better decisions, neither McDonald’s nor Wendy’s would continue to function as businesses. 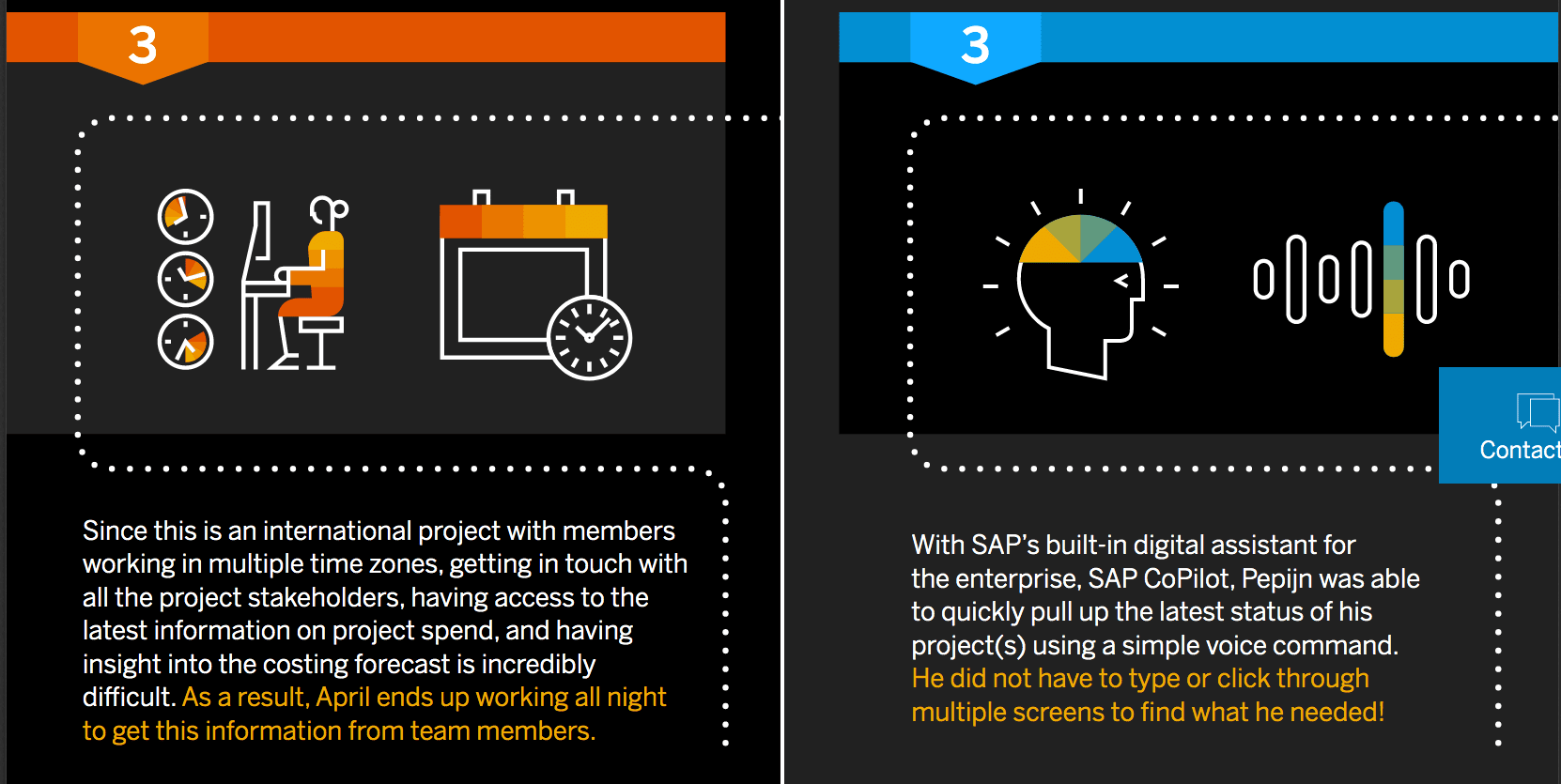 Did April consider asking to postpone the meeting due to data availability issues? And again, ERP systems are not places where one does financial forecasting.

Back to Pepijn, SAP’s CoPilot is not really “a thing.”

We have extensively tested S/4HANA Cloud and never used it, and it is barely showcased — but it would not be surprising if SAP marketing did not know this as they have a long-standing habit of just making things up. Also, why issuing voice commands to an ERP system be desirable? Is Pepijn disabled in some way that is not explained in the article?

Is April’s senior management not apprised of the limitations of their systems? If not, this would be a good time to tell them. But again, the forecast should have been in an offline spreadsheet a while ago. There is no reason to perform forecasting in an ERP system.

Back to Pepijn, he is now using machine learning in S/4HANA Cloud???

That is curious because we don’t recall seeing any machine learning in S/4HANA. ML/AI is the primary marketing hook that vendors have been using to lie to customers about their software capabilities. All ML/AI claims should, therefore, be immediately suspect. There is also no evidence that ML beats far more straightforward methods of performing forecasting. ML/AI works off of large data sets, not simple forecasting like Pepijin is performing (without the use of his hands)

April appears headed to an inevitable overdose with a bottle of sleeping pills. SAP should have ended the story this way, that April committed suicide because she did not have the right ERP system.

We have already covered where forecasting occurs, so the problem with April’s case study is that it is based upon false assumptions.

Pepijn, on the other hand, is probably headed to TGI Fridays after his glorious success. And at this point, the author of these case studies unveils their unnatural dog obsession, as a French bulldog ends up ignored because of April’s miscalculation, while Pepijn’s reward is spending time with two Chiweenie puppies. And as April is now dead, her French bulldog needs to find a new owner.

All of it could have been prevented by purchasing an SAP ERP system that Pepijn can speak to with voice commands. Well, there you go. No further analysis is necessary.

This is a standard SAP marketing puff piece written by people who have never used and will never use an ERP system. The claims of differentiation between S/4HANA and other systems are not true.

SAP receives a 3 out of 10 for their claim, and the “hands free claim” comes from S/4HANA’s ability to interpret voice commands. This may or may not be technically true (other ERP vendors would no doubt point out that a voice interpretation software could be used to drive their ERP systems partially). However, the major problem with the claim is that voice commands in ERP systems are not relevant. Voice commands are not very useful at much more than asking questions of Alexa or Google Home.

S/4HANA Cloud has many other issues that SAP should be addressing, for instance, performance, usability, a limited functionality footprint, among other limitations.