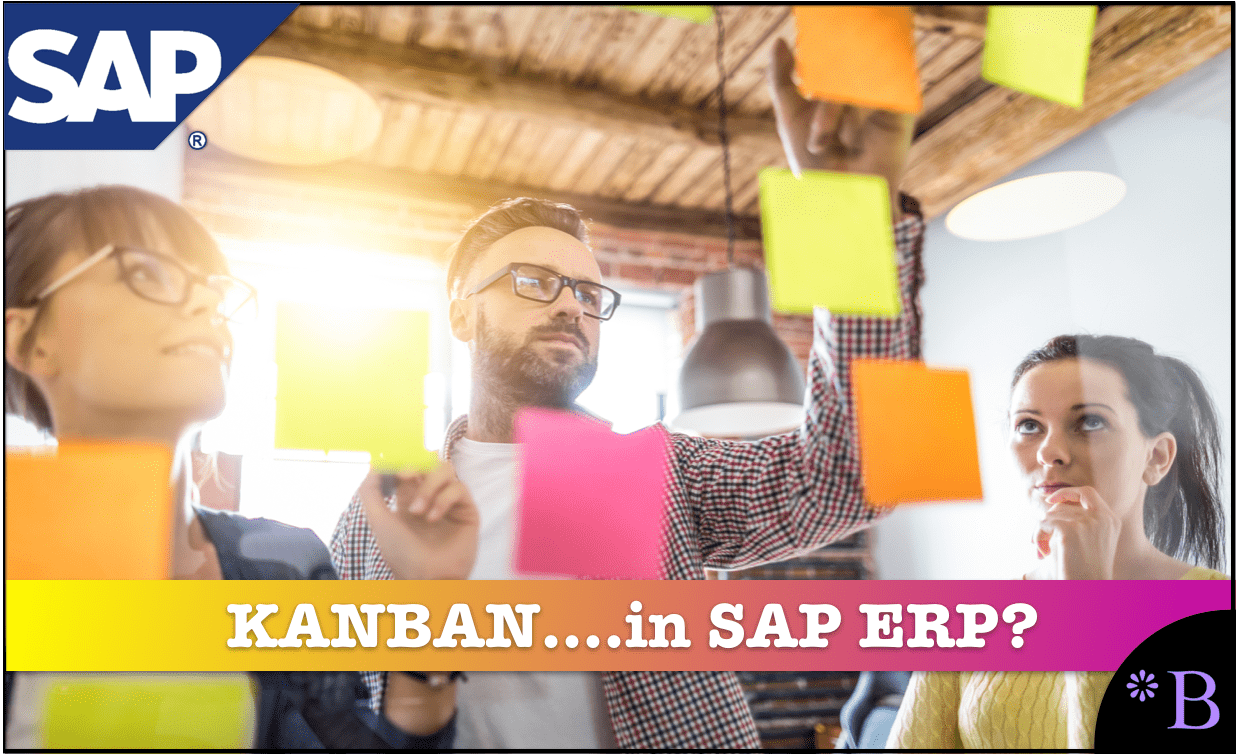 In this article, we will dive into and explain one of the more particular areas of functionality in SAP ERP, called KANBAN.

Let us begin this discussion by establishing what triggers stock movements in supply planning systems. 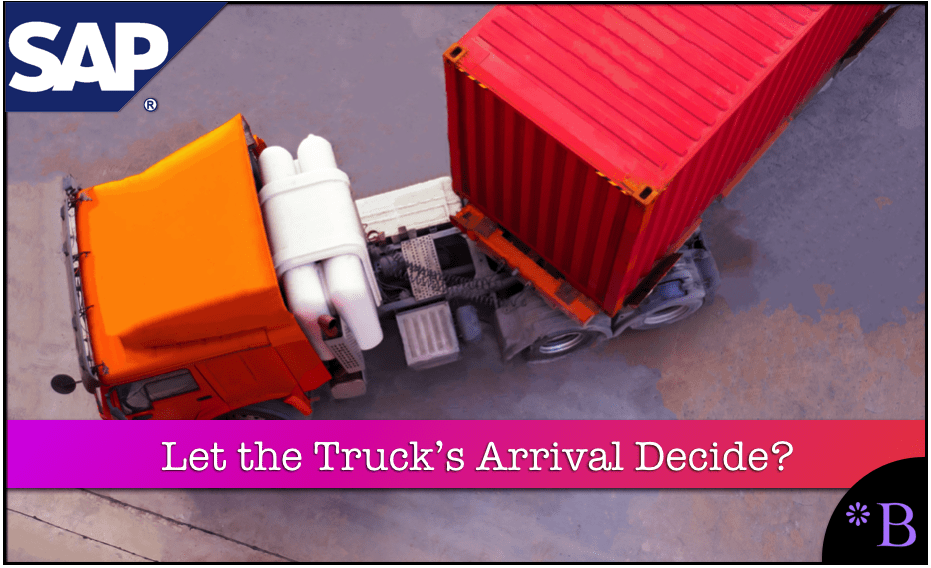 Therefore, the release of material should be timed with the truck’s arrival to capture as many products (that are ready to ship) as possible before the truck leaves. (This scenario only works if the truck has a large capacity than the product volume, which happens to be the case often for trucks on a milk run between factories).

Another example of this is KANBAN.

The field of supply chain management can be segmented into planning and execution areas. That is, planning or execution triggers.

However, once a purchase requisition is converted into a purchase order – now the order is sent to a supplier, and, at that point, the “wheels” begin turning. Accounting entries are posted, and physical things begin to happen within the supply chain. When “things start to happen,” at that point, we are in execution. Everything up to that point is planning.

What Is Supply Planning?

Supply planning is the business process of meeting future demand through the determination of sources of supply. These supply sources are production, stock transfer (from within the internal locations of the supply network), or procurement.

Supply planning maintains an intersection with the term production planning.

As a process, both supply planning and production planning can share the responsibility of created planned production orders.

Supply Planning’s Use as a Term

The term supply planning is quite underused.

The following shows the major categories of supply planning. 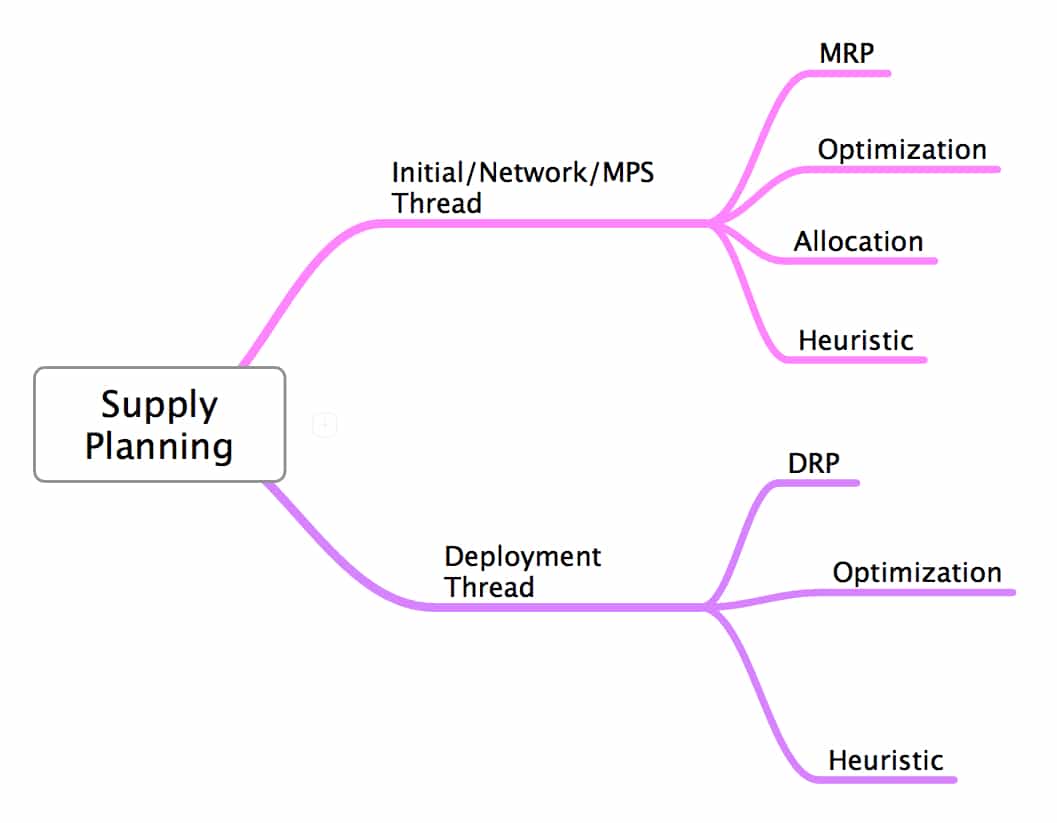 Let us review the Wikipedia explanation of KANBAN.

“Kanban (看板) (signboard or billboard in Japanese) is a scheduling system for lean manufacturing and just-in-time manufacturing (JIT).[2] Taiichi Ohno, an industrial engineer at Toyota, developed kanban to improve manufacturing efficiency. Kanban is one method to achieve JIT.[3] The system takes its name from the cards that track production within a factory. For many in the automotive sector Kanban is known as “Toyota name plate system” and as such some other auto makers won’t use the term Kanban.

The system originates from the simplest visual stock replenishment signaling system- an empty box. This was first developed in the UK Spitfire factories during the war and was known as the “two bin system.”

Kanban aligns inventory levels with actual consumption. A signal tells a supplier to produce and deliver a new shipment when material is consumed. These signals are tracked through the replenishment cycle, bringing visibility to the supplier, consumer, and buyer.

Kanban uses the rate of demand to control the rate of production, passing demand from the end customer up through the chain of customer-store processes. In 1953, Toyota applied this logic in their main plant machine shop.[11]”

Imagine a machine processing a material; creating a KANBAN system means that the work center has no preproduction material to process. Without an immediate transfer of material to its staging area, it will have to cease operations.

KANBAN is the movement of material triggered by the act of emptying a bin of material.

Let us review the following graphic to appropriately distinguish KANBAN and supply planning. 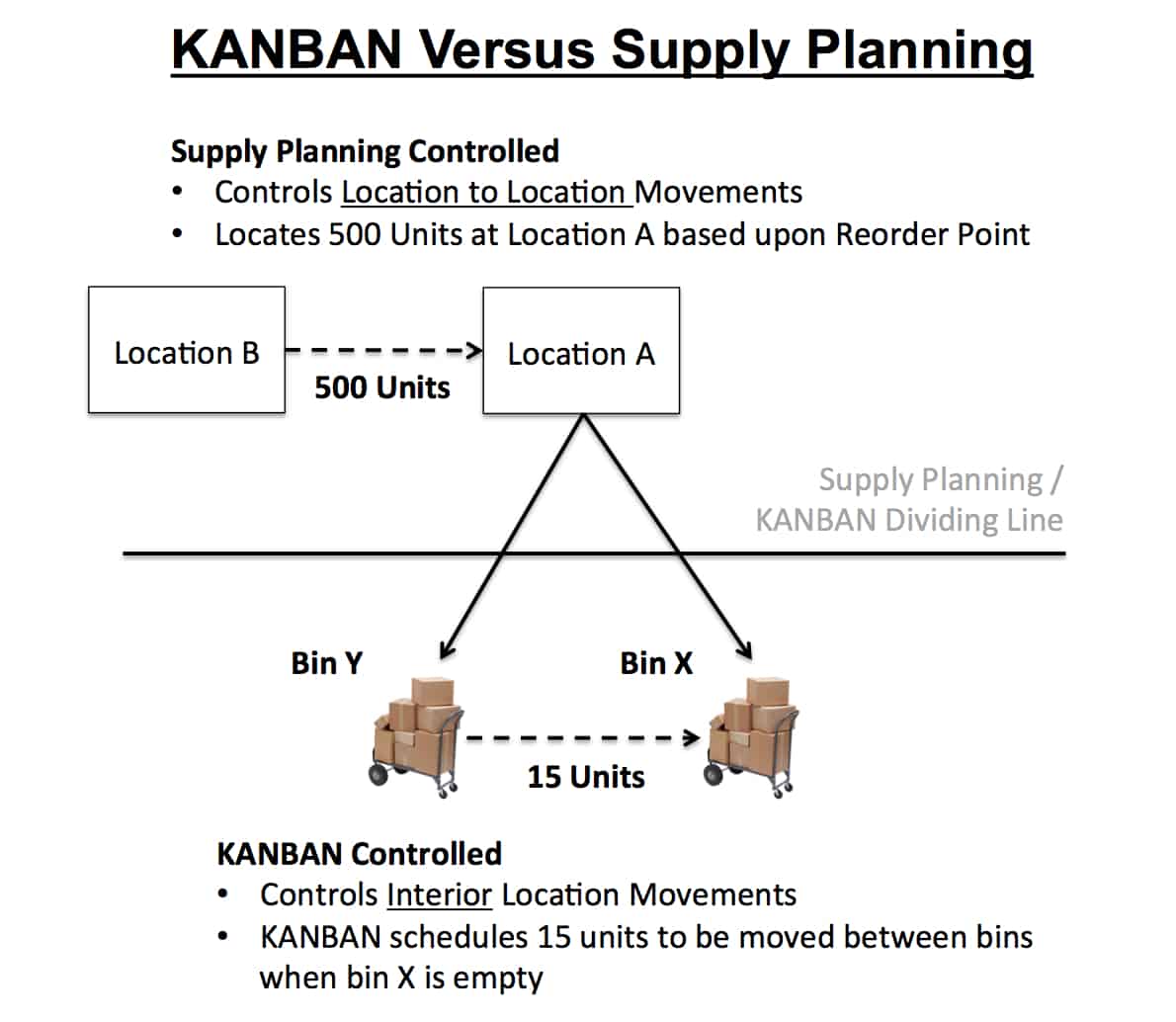 Using KANBAN Along with MRP?

The Types of KANBAN Available in SAP

Here is the quote from the SAP documentation, which seeks to reconcile KANBAN being part of MRP.

This allows the KANBAN system to actually create the procurement proposals. However, while this is possible, I cannot think of why I would want to configure a system this way. This is because SAP ERP already has a consumption based method of planning called the reorder point.

Let us go to a KANBAN board mockup. 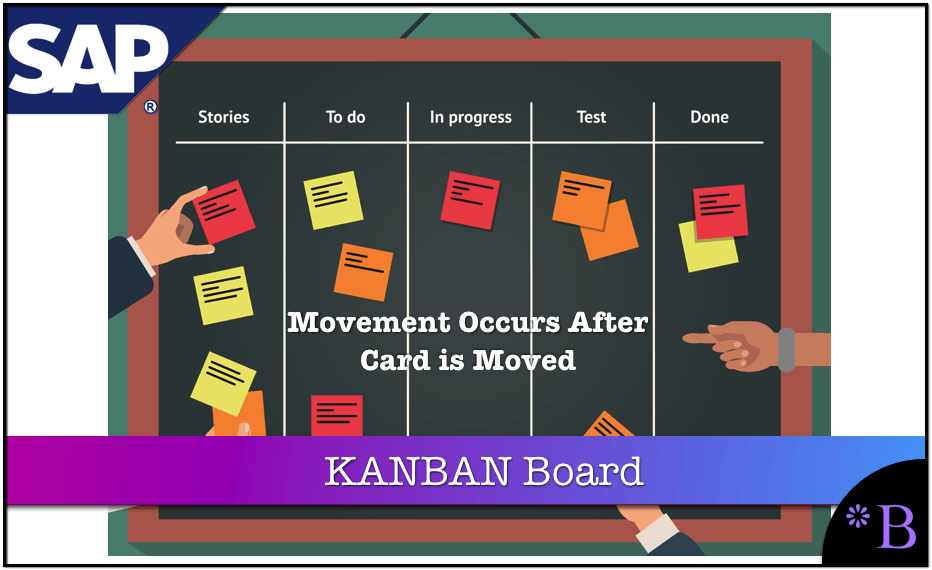 Once a card is moved on a traditional KANBAN board, that means the activity is to occur. This is a strange metaphor for planning. Planning triggers a movement, but the movement does not occur in reality immediately. It can’t because planning deals with lead times.

KANBANs systems traditionally have no lead-time. Instead, they are signals for immediate replenishment. They are not useful in creating a material movement signal unless the material is available in the same location or in a location that is extremely nearby to the facility.

(This was incidentally was the original design and concept behind supermarkets as run by Toyota – the external facilities were supplier managed mini-warehouses.)

Thus, if KANBAN is run along with MRP, it is still necessary to use reorder points to plan the stock and supply location for the KANBAN storage location. For instance, a KANBAN can be set up to point to three different sources of supply:

When working with an external source, the supply must have stock when the KANBAN signal is received and must be planned. Therefore, the MRP run, combined with KANBAN, must be thought of as a separate planning run. It has a different scope and would be on a different planning cycle.

For instance, it is quite likely that the plant planners would want to run MRP interactively throughout the day to trigger the KANBAN orders when they have time to deal with them. 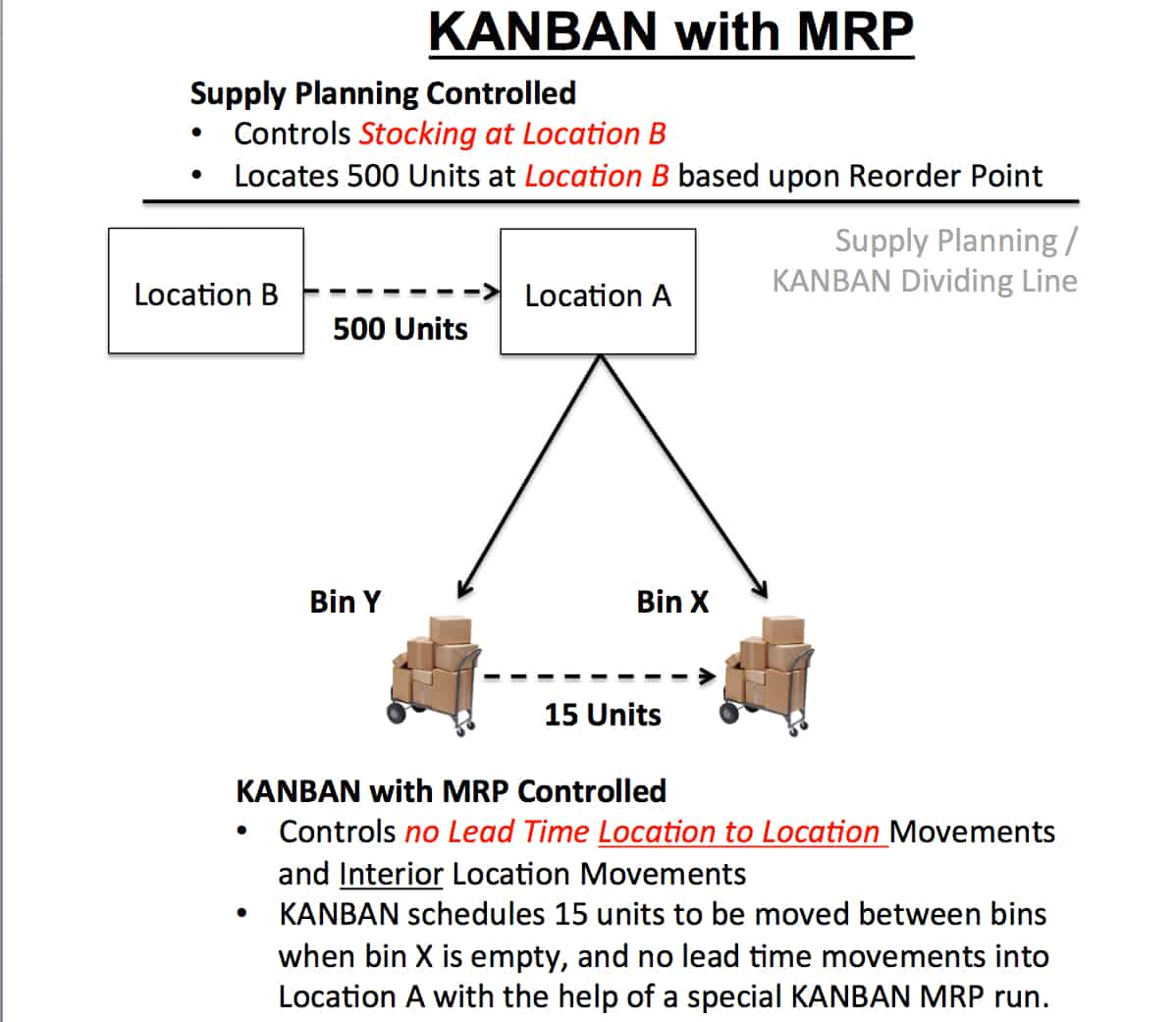 It is beneficial to compare this image to the graphic that preceded it. Under this design, notice how the supply planning versus KANBAN dividing line has moved upwards, giving the KANBAN / MRP combination a larger scope.

In the conventional MRP procedure, production quantities and dates are calculated per actual customer requirements. The required quantity and dates of the components are calculated by exploding the bill of material. Exploding the bill of material is performed by MRP. Any other supply planning method takes the quantity of the finished good demanded and then multiplies this by the components and subcomponents required to support the production of the finished good. The production quantities can be compiled for various requirements.

All of this leads to the next question.

Is MRP a Naturally Part of KANBAN, or is this a Force Fit of a Trendy Item into MRP?

SAP’s documentation makes it sound like SAP ERP is somehow in control of the process, but in fact, while it will create a signal, the signal is already inherent in the emptying of the bin on the shop floor. KANBAN began as an entirely visual and manual system, which used cards (which in Japanese were called KANBAN). No system is required. As much as SAP implies that it controls the flow of material setup as a KANBAN, SAP is in many cases (the cases triggering the movement will be discussed further in this article). It is more of a recording system. In a way, this is stated in SAP’s explanation of KANBAN in the following quotation.

“In KANBAN techniques, no separate, higher-level planning is used to control the material flow through production. Instead, the work center further down the line (demand source) requests material from the preceding work center (supply source) only when it is required (PULL PRINCIPLE). For this purpose, a control cycle is created – with a fixed number of Kanbans (cards) – between the supply source and the demand source. Each Kanban represents a specific material quantity and usually represents a container (however, this need not be the case).” – SAP KANBAN Document / PPKAB

What does this have to do with replenishment between locations/factories? I ask because some SAP customers ask about using KANBAN in SAP ERP between factories.

Supply planning operates at the level above KANBAN. If the supply plan has not been effective, there is literally no material to “KANBAN.”

Interestingly, I did run into an example of KANBAN being successfully deployed in SAP in a company. It was considered one of the smoother implementations at that company. 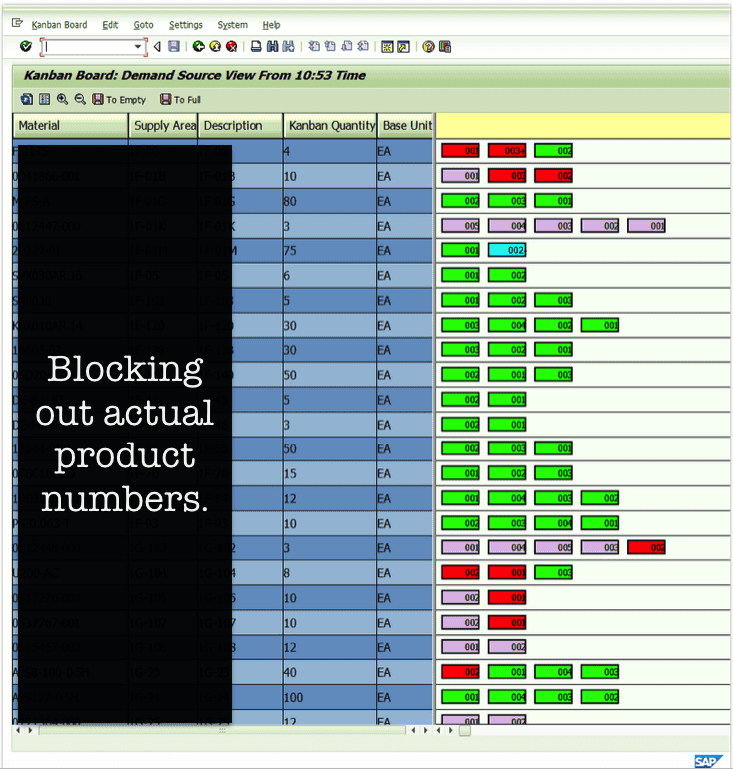 This is the primary KANBAN screen. It shows KANBAN bins at various stages. Green means the bin is filled, red means that it is short. Purple means that it is waiting. One needs at least two KANBAN bins (one to be filled and one to become empty) to serve as the trigger for replenishment. The reason for more than two bins is because of different replenishment points. So if there are four bins, that may mean that the bins for that material support two scheduling lines.

This company actually set up the KANBAN to control interplant replenishment. This connects scheduling to supply planning.

Overall, this same company disliked reorder points, which is odd, as this design is essentially reorder points. It is curious how KANBAN can have a good reputation, but reorder points more often than not end up with a poor reputation.

SAP has written 194 pages on KANBAN, and I have not read or digested the entire document, but SAP’s design is confusing and is very short on explaining why KANBAN is set up in ERP. It appears to be set up by someone from product marketing telling SAP development that “we need to have KANBAN in ERP to sell more software,” and SAP development buying some textbooks on KANBAN and putting every KANBAN derivative into the system.

And even combining it with something, it has nothing to do with conceptually, that being MRP. Any material movement that is very short lead-time in nature will tend to fall out of the control of both the planning system (including planning procedures in SAP ERP). However, this is a point of confusion for those that do not work in supply planning software. The shortest time horizon control method within supply planning is the reorder point. Once the horizon is shorter than that (for instance, KANBAN assumes almost instantaneous replenishment; if it didn’t have this assumption, then KANBAN would not be triggered when there is an empty bin.

One thing that seems never to be asked in SAPs documentation is why SAP ERP is involved in the process in the first place.

A KANBAN is a physical shop floor method of scheduling material flow within one location. KANBAN’s very name is taken from the KANBAN card, which is a visual cue to perform replenishment to a stocking location from another stocking location or machine. Why is it necessary to configure the triggering of such movements in an ERP system? Certainly, the stock transfer results must be recorded and will be with a goods issue and a goods receipt. However, if the ERP system is triggering the stock movement, I would argue it is no longer a KANBAN. SAP ERP already has a consumption-based method of planning called the reorder point.