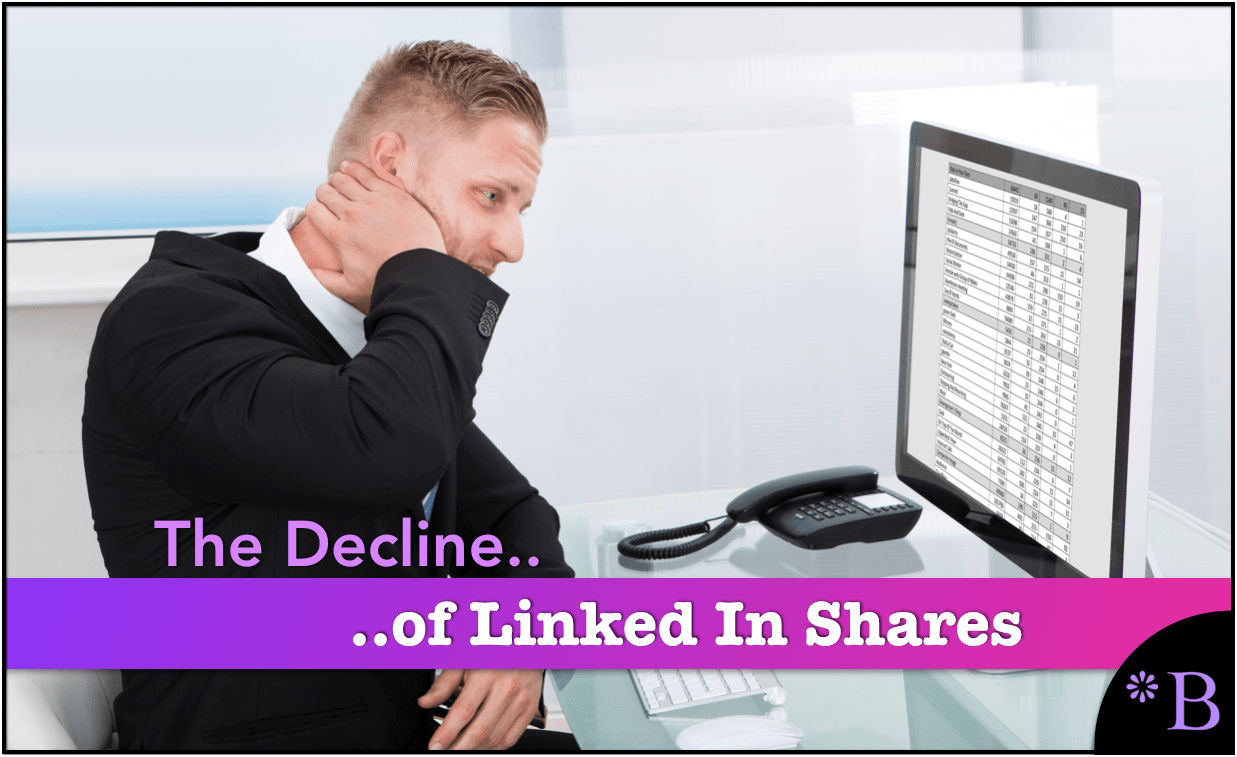 Several years ago, LinkedIn began allowing sharing content, which allowed people to either write articles within LinkedIn’s editor — or use a post that showed an introduction, with then a link to a website.

In this article, I will analyze several examples that were not “cherry-picked” from my feed. These were just typical shares that I found in the feed. These shares tell us something exciting about the current state of content sharing on LinkedIn. 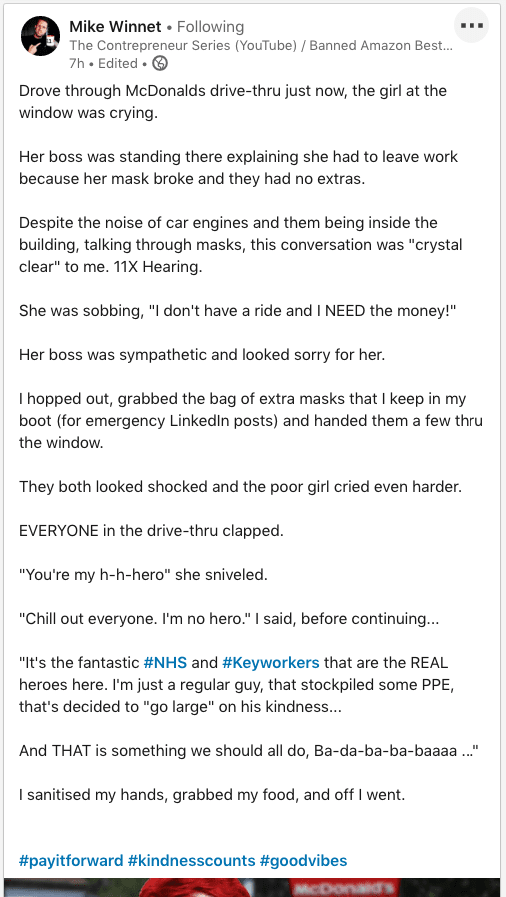 This is a typical virtue-signaling share on LinkedIn. This is incredibly self-indulgent. This not only virtue signals but places the individual sharing as the person who saves the day.

However, the joke was on me. It turns out that Mike Winnet creates these shares to lampoon other virtue-signaling shares.

The problem? The other shares are often so self-indulgent I can’t even differentiate between shares that lampoon these shares and the real shares. I want to apologize to Mike for having his share critiqued — sorry, Mike. However, your share tricked me into thinking it was real proves both of our points.

The response to this ridiculous share was overwhelmingly positive. 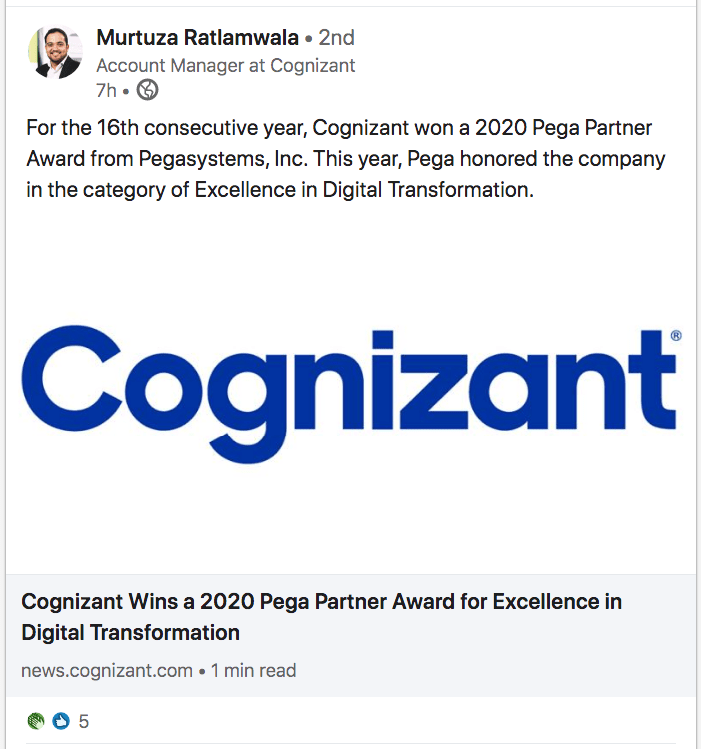 This is a promotional share. Cognizant IT consulting firm with an appalling reputation brings in an enormous number of H1-B visas under pretenses and is a glorified IT body shop. Naturally, they have won some award where they most likely paid off the entity providing the award. The term “digital transformation” is itself fake dreamed up by marketers, as I cover in the article The Problem with Digital Transformation. Why anyone would care or believe anything said by Cognizant is beyond me. 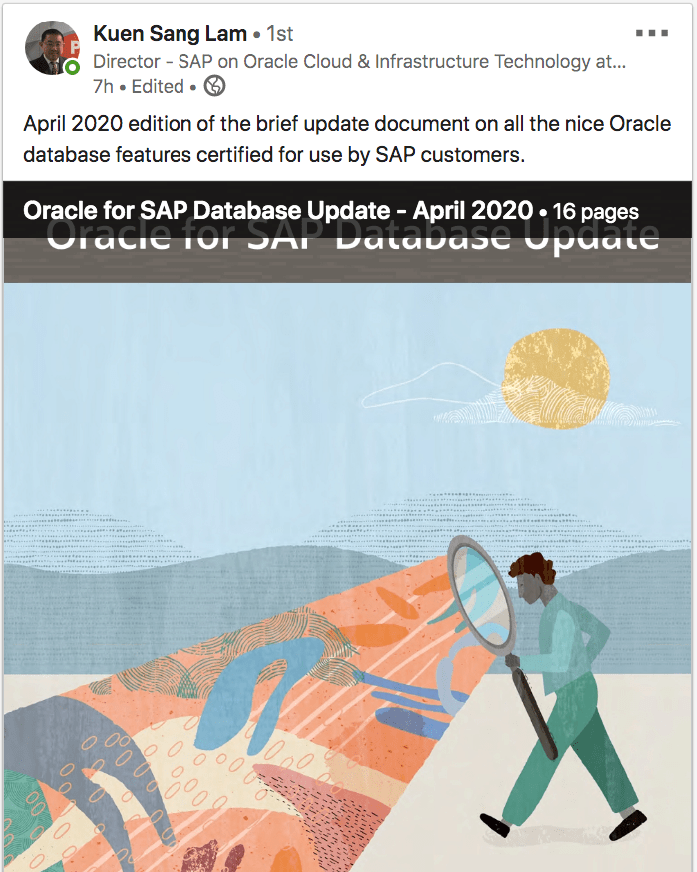 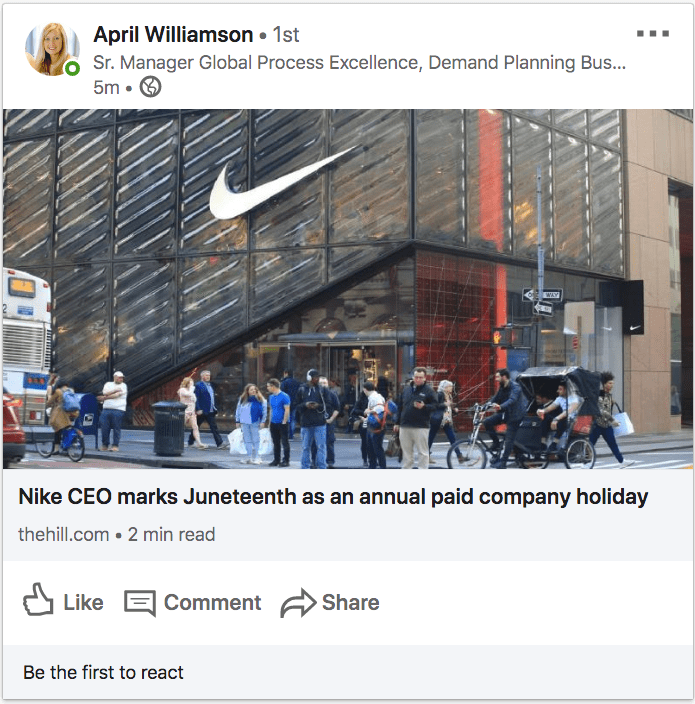 This is a virtue-signaling share. Nike, which uses large numbers of sweatshop laborers and is routinely caught not enforcing standards in overseers factories, wants to tell me how they will support a black holiday. 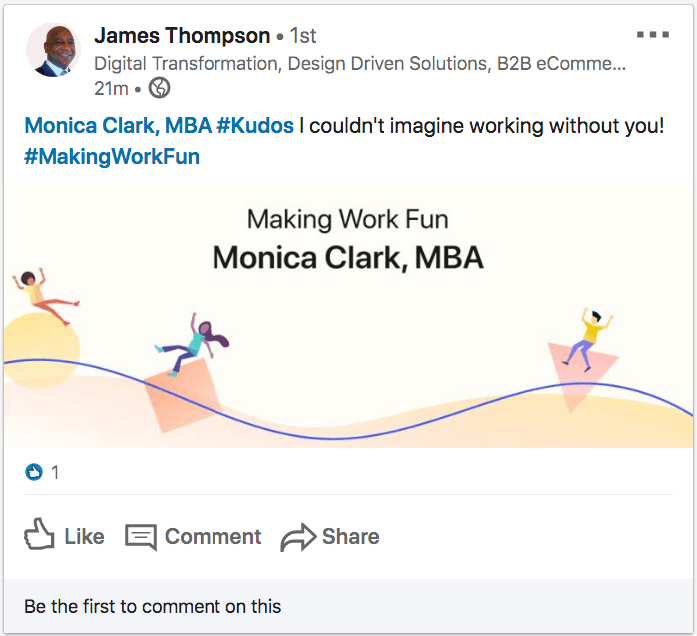 This is a “positivity” share. Positivity shares are quite common. They have nearly no content and simply say something positive. 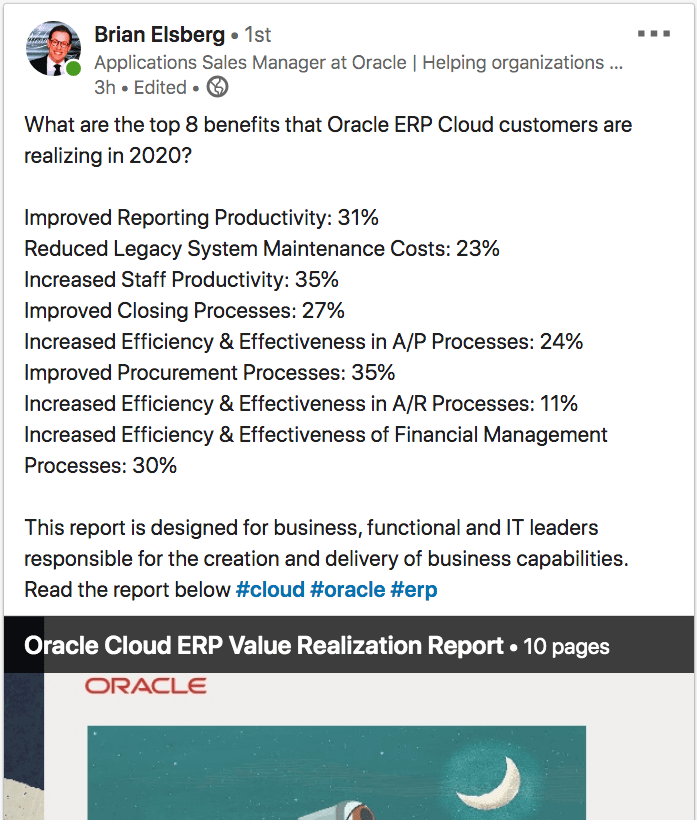 This is another share from an Oracle resource, which is promotional. Again, the individual who is sharing did not write the material. 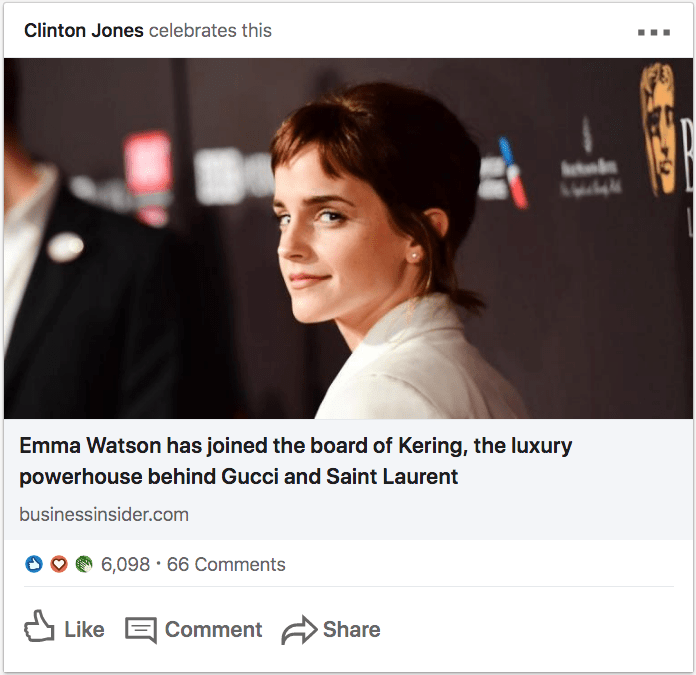 This is a pro-woman share of an article in Business Insider. The relevance of this share is difficult to understand. 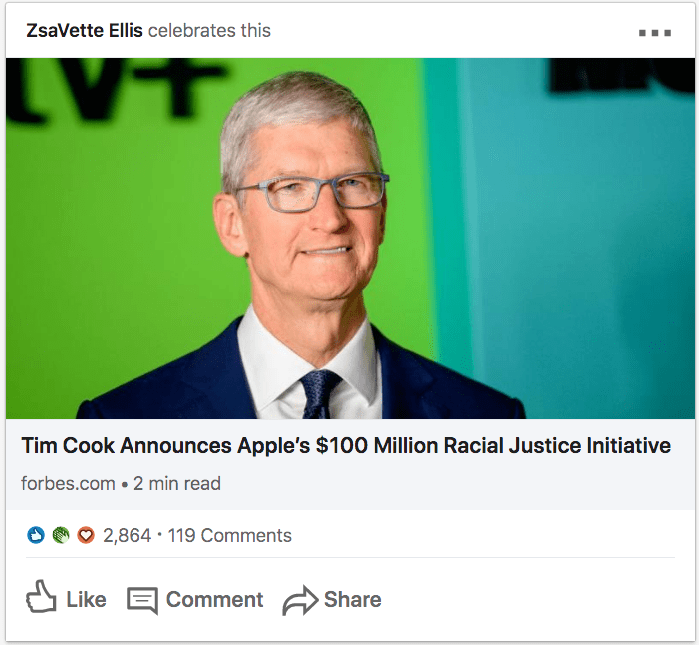 And we finish off with another virtue signaling share, this time from Apple. Apple, like Nike, has most of its “employment” — around 90% in overseas factories with low labor standards. But again, Apple needs to virtue about “racial justice” around the BLM current zeitgeist.

What Are These Shares Reminicient Of?

LinkedIn was supposed to be a professional site where professionals share information. However, I recollected an article on Mult Level Marketing I read several weeks prior to going through these shares. I went back to this article to observe similarities with these shares. 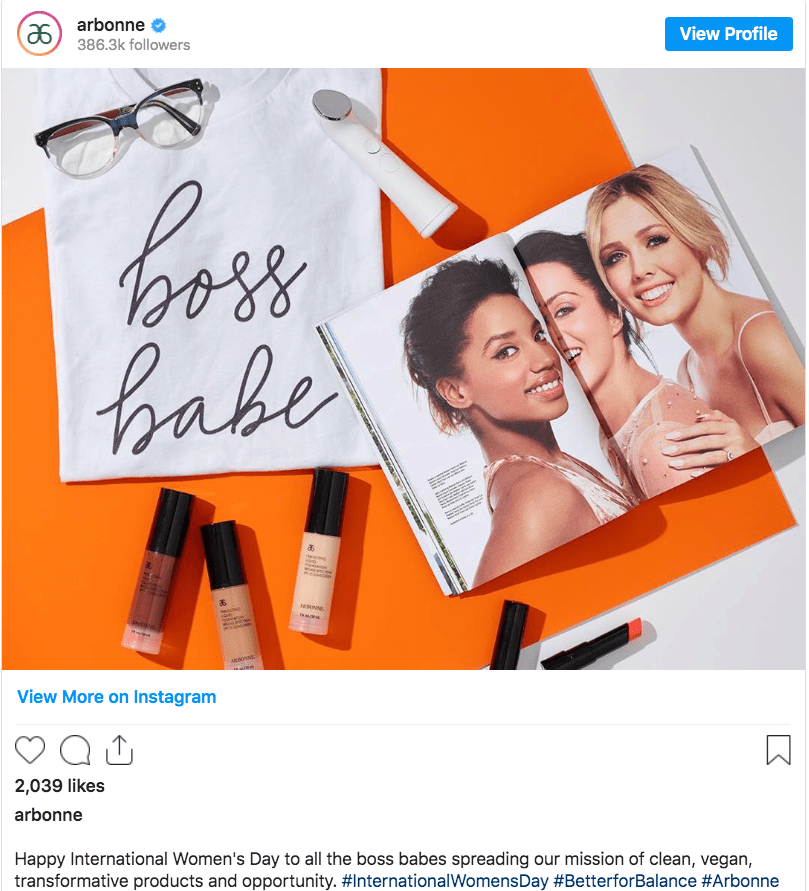 Arbonne is a Multi-Level Marketing company that sells personal care items. They are known to give terrible experiences to those that sign up for this scheme. Like many other MLMs, Arbonne is known to focus more on feelings than the details of the business. Arbonne is about telling those who become part of the MLM to “follow their dreams” and not worry about the details. MLM also intersects with self-help gurus — who often speak at their conferences.

The following quotation is instructive of this.

Marketing and training materials for MLMs are often littered with “fake it ’till you make it” mantras and platitudes like “decide today what you want to be tomorrow,” Burnside said. The key word “empowerment” is used in a lot of their training. “They’re connected with the feminist movement to make it feel like this is something that will empower women.” – Huffington Post 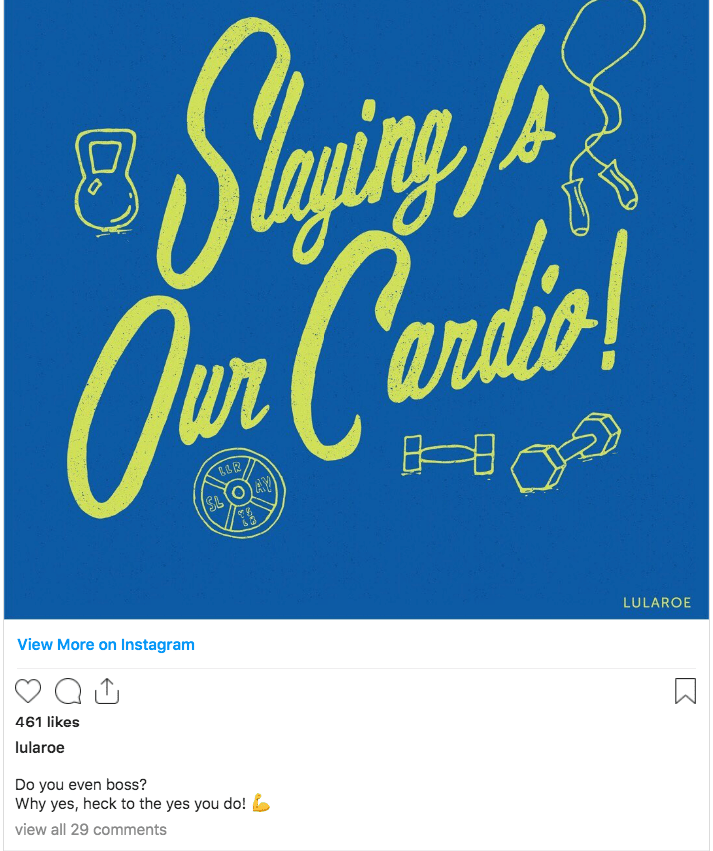 This is a share from LuluRoe, an MLM scheme that sells women’s active clothing. Again, there is virtually no content, and the focus is on positivity and emotion.

A large number of companies and people that have nothing to say outside of virtue signaling, positivity signaling, or promoting themselves are sharing “content.” This content has a positive value for the content creator (that is, it can get the money) but has a negative value for readers as it is without substance or is false. I have scrubbed my feed over time. That is, as soon as a person shares a personal accomplishment, I have “unfollowed them.” If a person receives a Six Sigma certificate and places an image of the share certificate, that person is unfollowed. If the share is about virtue signaling or other “positive thinking,” then again, I unfollow them. However, my desire to have only shares in my feed by people who have content to share has been unsuccessful because most shares are offering such poor quality content.

Furthermore, when I look at my feed, it makes me less interested in sharing my material.

I put a lot of effort into the articles I write.

There are links at the bottom to entice people who are interested in research services. However, the content part of the article is free from promotional material. However, these shares coming through on my feed are by in large nearly all about promotion — with very little in the way of content.

When I compare my shares to the shares in my feed, it is apparent that there are very few shares of any quality. Secondly, because the average share quality is so low and is so easy to create, it means that LinkedIn feed is now suffused with easy-to-create shares. As low-quality shares are so easy to develop, there are naturally many more of them. This is explained in the following quotation.

All social networks sooner or later became totally similar if there no moderation. – Denis Myagkov

I interpret this to mean that they drive to the lowest common denominator with non-status quo ideas-driven out. They become completely neutered and politically correct. Then IBM or Accenture hire “influencers” who then virtue or positivity signal — or shares from IBM or Accenture’s marketing departments provide positive PR spin on their accomplishments.

After this article was published, I found this quote from Alex Geuken, which I thought was quite insightful.

See me See me, quantity over quality. LinkedIn was a professional business network now it has become a Facebook/Instagram clone. post post post, share share share. No effort No quality only to get a like and to be seen. this is a good research of what has become of LinkedIn. Sad to see the progress. Does anyone know of a replacement for LinkedIn? i don’t want to see any more Friday dance or meaningless post about… nothing.

I have removed both apps (Facebook/Instagram) but I see the transformation of LinkedIn and it’s becoming worse by the day. It’s just about the ads and getting the user to mindless scrolling I recommend the documentary on Netflix Social dilemma! Scary but very true. If you are on any type of social media and not the buyer you are the product!

This leads to a larger subject: the incentives that Big Tech has in infantilizing the audience.

This is reminiscent of the primary objective of marketing/PR. Marketing/PR attempts to get the audience to accept the discourse being degraded to the most base level so that the audience is controllable. Ford wants people to buy large pickup trucks. And they can sell more pickup trucks if they can stop the target buyer from asking if

Is this the perfect buyer? Well, they have no higher-level thinking, are all about the present, look out only perhaps a minute or two — and they seek immediate gratification.

Why would you not want to sell to this demographic?

Unfortunately don’t have money and are restricted by law from engaging in legal contracts.

What if you can take a full-grown person and turn them into a more regressive state through manipulation?

Once marketers can bypass the neo-cortex’s logical fencing, they can speak directly to the lower-level drives of the audience. This is why emotion is so frequently used in advertising.

Look how manly this truck is. Don’t you want to be manly also?

Here are a few questions Ford does not want you to ask.

Although I have not interviewed them, I think it’s very likely that Ford’s view is “don’t overthink it” and that this is “a great vehicle to drive down to the strip mall to pick up a Jamba Juice.”

When you have a system that has no regulation by a body that looks out for the common good (for instance, protecting the environment, etc..), you end up with a large number of buyers purchasing wasteful products and where the buyer has been manipulated into buying them by the producer. 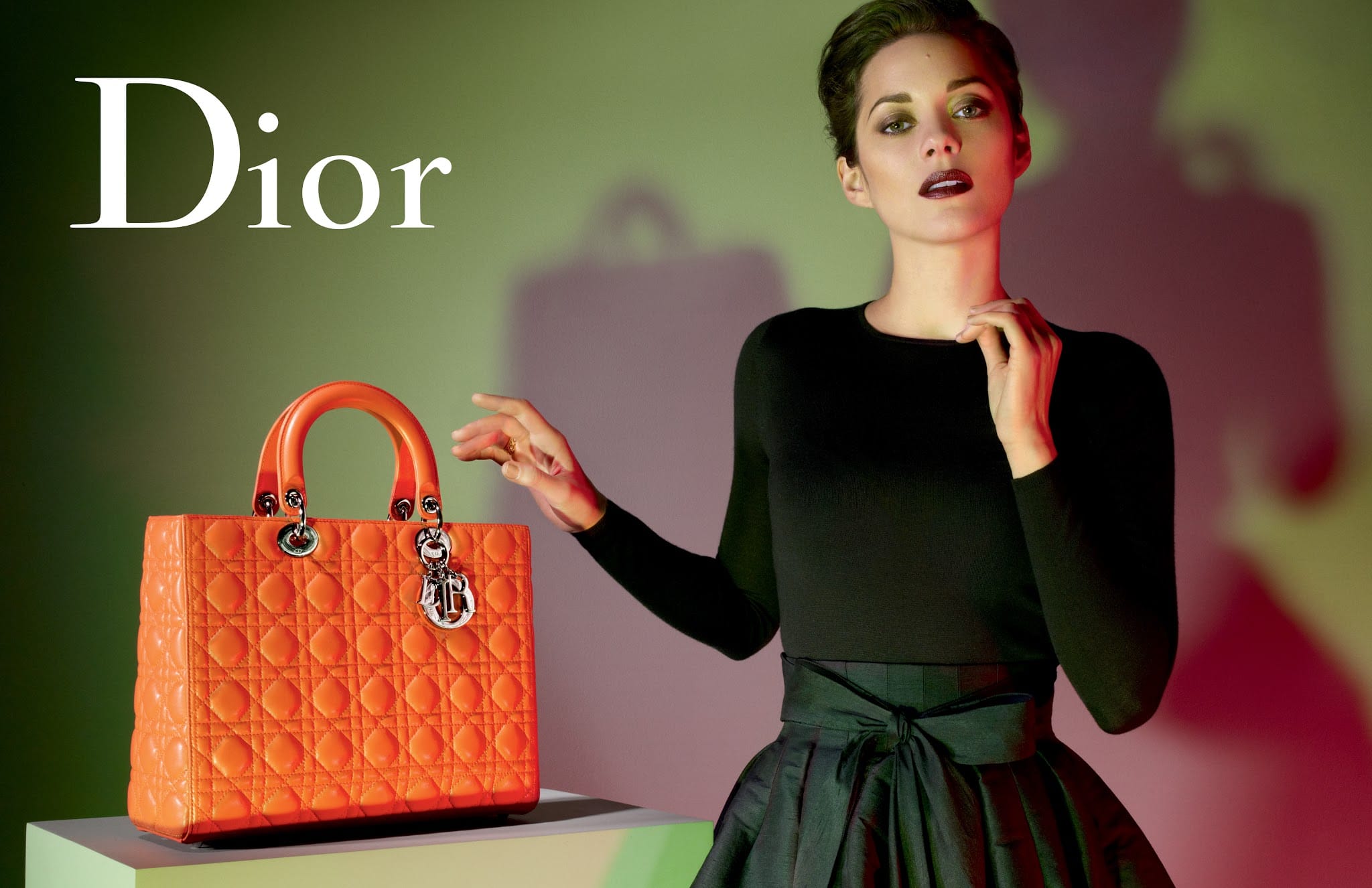 This bag has the same function as pretty much any other bag. However, it is several thousand dollars. Notice the association with a famous actress Marion Cottilard. Advertizers need buyers to see the bag as are more than its physical function and as a method for communicating high status to the peer group. This bag says I have spent an enormous amount of money on an accessory item made in a Chinese sweatshop. Again, push the message below the neocortex into the limbic system and the reptilian brain.

How does this work specifically?

“You can literally witness this battle going on,” says Ben Hayden, a neuroscientist who studies decision-making. He told me about researchers at Caltech who scanned the brains of people on diets while offering them junk food. A certain region of the brain lit up when the dieters resisted junk food. Hayden says that self-control region is in a tug of war with the parts of the brain affected by ads.

“When advertising comes into the picture, it kind of is the opposite of self-control,” Hayden says. “It encourages you to just go out and buy it, just do it.” – NPR

This is explained further in this quote.

Advertising manipulates you because it influences your subconscious by infiltrating the logical mind that protects the brain regions responsible for faith. Advertising has a big impact on social learning: it introduces models, defines trends and creates traditions! Advertisements impact our identity and our values ​​of influence. The ads made the woman smoke! To better understand the effects of advertising, you need to understand how advertising works … – Gyan deo Mishra

Ford, SAP, Microsoft, and other major corporations require platforms to help them infantilize the audience. In this case, Microsoft owns the infantilizing device to sell its wares and help other corporations sell their wares.

To answer why LinkedIn is emphasizing shares that are either critical or take real thought, the answer can be found in the fact that it is an advertising platform. To be effective, they must drive the platform content down to an infantilizing level.

What is happening with LinkedIn Shares is the same phenomenon as is found in counterfeiting. Enforcing counterfeiting laws is important because, without this essential regulation, the bad money eventually pushes out the good. It makes people not want to use the currency. LinkedIn has no minimum standard for the effort that is placed into shares — and because LinkedIn actively promotes shares from wealthy multinationals that generally have nothing to say — they have degraded the environment of sharing.

Overall my feed now looks more like the PR and marketing departments of various entities would like me to read. That is, my LinkedIn feed has devolved to the point where it is a marketing feed.

From this, I predict the engagement on feeds will significantly decline. Already my LinkedIn feed is more of an irritant or “false” positive when the notification appears than an indication that anything I will want to read is shared. I have no insight into the engagement with LinkedIn shares — but what I say might have already happened.