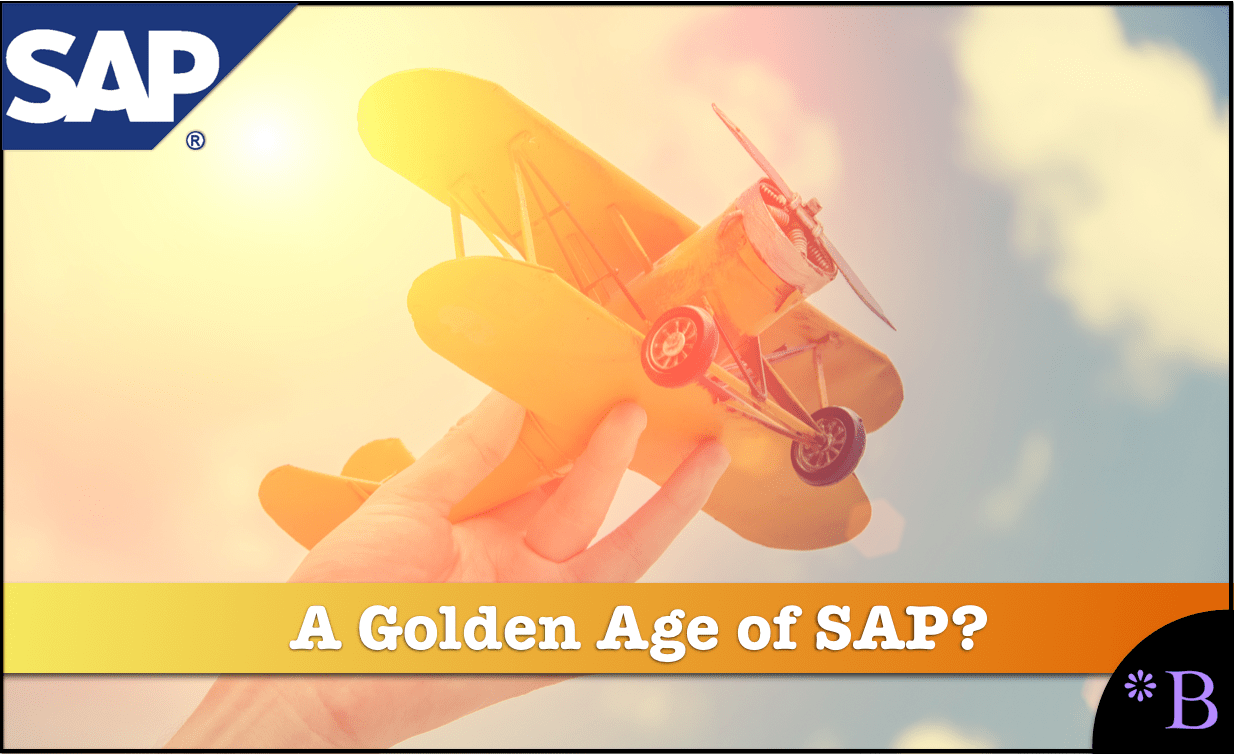 In this article, we will cover a common assumption promoted by SAP proponents. This is the proposal that SAP was at some point, a company that added a lot of value to customers. This is what we call the myth of the golden age of SAP.

How and When the Myth is Used

Over time even with nearly total control over IT media and with complicit SAP consulting companies and also independent SAP consultants (who know where their bread is buttered), a concept has arisen. It is often used by the proponent when faced with the undeniable fact that SAP is abusing its market position and power in some way. In a discussion around indirect access claims brought by SAP, the following is an example of this claim.

“I love SAP and worked with it all my career, but it is sad to see such a great innovative technology company allowing their Sales teams to go down this path…”

We found this comment curious because SAP has never been an innovative company.

What SAP has had is an aggressive series of claims about innovation. But as we have analyzed in great detail, SAP routinely misleads customers, Wall Street, and their employees about how innovative SAP is. An excellent example of this is regarding the claim that Hasso Plattner invented HANA. This claim is demonstrated to be an impossibility in the following article Did Hasso Plattner and PhDs Invent HANA?

Their innovation is well known and is demonstrated in their products and output.

What Was SAP’s Innovation?

The reason SAP is SAP has little to do with their software. Back in the 1980s, SAP was one of many ERP vendors. At that time, ERP was a new category of software that took an MRP system and integrated it into a financial system and later other systems. The “M” in MRP was simply replaced with “E” for “enterprise” to broaden out the meaning of the software as to mean the overall company is covered by the functionality.

And that is what SAP did, and they did it more than any other vendor.

And it is why SAP has the most expensive and most time-consuming implementations, which is correspondingly why they have the most consulting company recommendations (see the connection?)

Was a Three-Tier Design Innovative?

Once one moves outsides of doing an excellent job of executing on a universally shared vision of connecting the financial system to the MRP system (which again is not innovation, as all ERP vendors had this vision at the time), the next claim is that SAP innovated when they went to a client-server or three-tier design. This was when they introduced R/3. Only a few people would propose this because most people that work in SAP don’t remember this supposed innovation.

However, again, this is something that vendors were in general moving to at that time. If everyone is doing something and you do it as well, then it is, by definition, not innovative.

SAP’s claims of even being close to innovation become even less supportable.

This list could be longer, but there is no innovation we can find anywhere. (if we eventually find some, we will update this article).

Furthermore, there are many examples of SAP providing very backward components of its software and not changing them for many years of these items.  Many elements of SAP are positively backward. A few of these items we have listed in the article, How to Best Understand SAP’s Negative Innovation.

This, of course, does not stop SAP marketing from continually talking about how innovative SAP is. But SAP’s marketing department will typically have at least two false statements in any single page of content that they create. (that is two being the minimum number of falsehoods) so there is no reason to uncritically accept any statement that comes from SAP as true.

It also does not stop SAP consultants from dramatically overstating SAP’s history of innovation. Interestingly, innovation is one of the criteria we use to evaluate software vendors in our Honest Vendor Ratings.

Yet, how often are PlanetTogether or Arena Solutions listed as innovative leaders? How much does being lauded for innovation have to do with the company’s size and the number of people who are enriched through association with you?

We can find out by going back in history.

This is Louis XIV. He began his reign at the age of 5 and died at 77. During his reign, France was the leading power in Europe.

It might surprise some people to learn that when people would come to the court of Louis XIV, they tended to flatter Louis. They downright exaggerated his positive attributes. That is, they exaggerated his qualities both to Louis XIV and to others to gain favor with Louis XIV.

It is difficult to tell from the portrait, don’t know if you can tell, but Louis XIV tended to like flattery. I know this is all rather shocking, so please just hold your surprise until you have had time to finish the article, and then you can go and lay down.

The SAP market is filled with consultants who will praise SAP because it is profit maximizing to do so. These sycophants will say anything about SAP’s accomplishments because they don’t care what is true and only look out for their self-interests. A meeting with any of the high command at SAP would go something like the scene from John Adams above, (except they would perform more curtsies)

History shows that powerful people often have people say flattering things about them by people who have benefited from them or intend to benefit from them. Once you become a billionaire today, you receive an unending series of gifts, and people reaching out to you to praise you for various characteristics you possess. I know several people who have kept count of how many billionaires they have met (and in turn ask me how many I have met (my answer? zero))

Isn’t it curious that the software which usually pays the consultants the most to work in it, also just so “happens” to be the most innovative according to those same consultants?

Is it possible that people are exaggerating positive attributes about SAP, and downplaying innovation at other vendors for personal reasons?

At first glance, the emphasis on religious worship may seem a bit odd. Why would an all-powerful entity care if the beings he created worshiped him (or her or it).

But the people that created these organizations do care.

Religious worship can be viewed as early training in how to subordinate one’s thoughts to concentrated power. What is being worshiped does not have to check out with the facts; it just has to be widely agreed upon as something to be esteemed.

Why the SAP Golden Age Myth is Promoted

People don’t like thinking they have benefited from being associated with an entity that attained its station through non-value added means. For this reason, it is tough to get people to accept criticism of what they work within. And this forces the mind to search for justification. For example.

If you bring up these topics with people that work in these areas, they usually tend to either become disassociative or use a logical fallacy to defend the space that they work in.

Indeed, SAP has gotten more abusive in recent years, treating it’s more partners poorly, using new approaches to extract undeserved income from its customers, such as with indirect access. But these are simply enlargements of abuses that have already been in place for decades. SAP was the most aggressive vendor, perhaps in the history of software vendors to outsource it’s consulting to large consulting companies, which means it mostly had the lowest bar for ethics and consideration for its customers.

It knew these consulting companies would fleece these customers, but it simply did not care.

People that propose that SAP was at one time good or at one time ethical are, in part, attempting to justify their cooperation with SAP that resulted in excess gains. They seem to be particularly skillful in “looking the other way.” It is difficult to believe that the actual outcomes on SAP projects, SAP’s constant lies, and the treatment of SAP-endorsed consulting companies managed to escape their attention.

It also happens to be historically inaccurate.

SAP benefits from having a literal army of people who have made their career in SAP define what SAP’s history is for other people. And they are not driven by what is true, but rather by what they would like others to think is true.

Through their defense of this faux “Golden Age of SAP,” they lay the groundwork for the idea that SAP can be “reformed” and help perpetuate what will be only more abuse on the part of SAP.