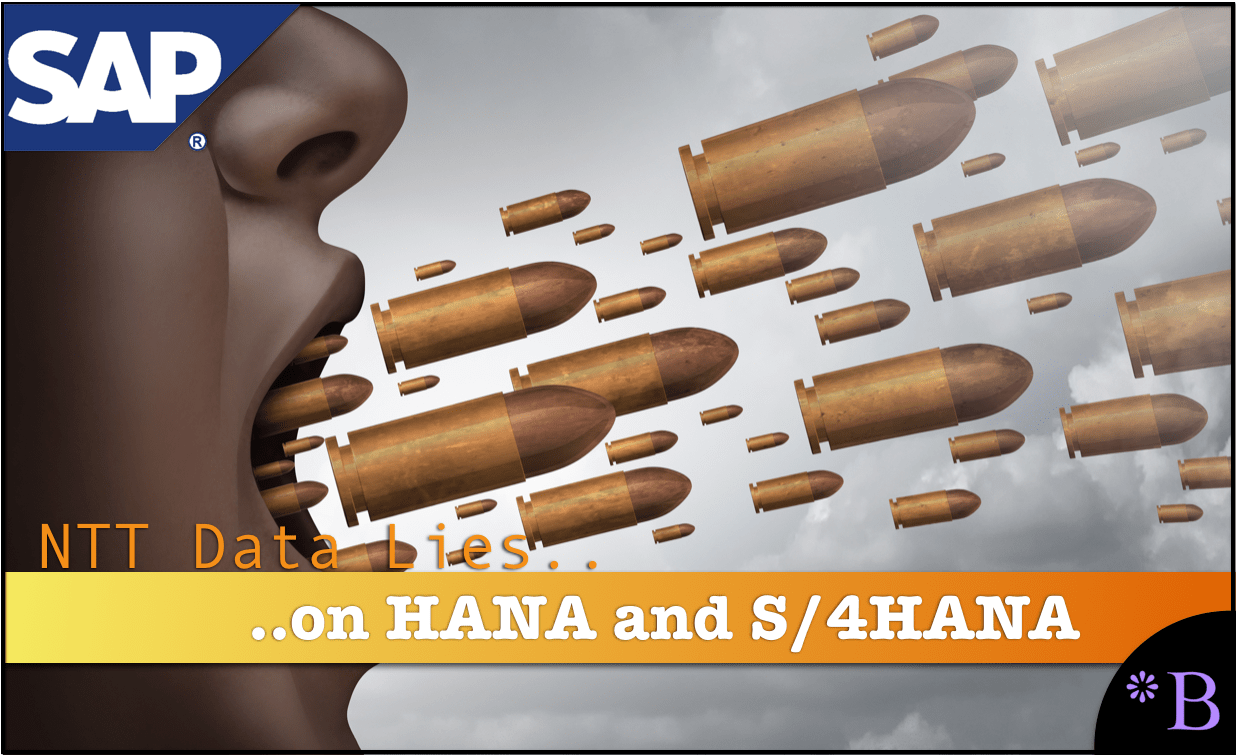 The Brightwork Research & Analysis Propaganda in It Award is awarded to articles that contain excessive degrees of false information about IT topics. In this award, we include parts of the awarded article, along with our critique.

The award winner can display the image above on their website. We recommend right below the article for which they won the award. This article is titled 2015: The Year of S/4 HANA.

“First announced in 2010, it quickly became clear that SAP HANA would be the foundation for everything at SAP. With columnar storage, advanced in-memory compressions, and unmatched processing power, SAP on HANA is fast, empowering businesses to run in real time, crunching Big Data – transactional, operational, structured, & unstructured – to transact, analyze and predict instantly on a single platform at the moment of opportunity.”

It is untrue that HANA has “unmatched processing power.” SAP has provided no benchmarks that support any of SAP’s marketing proposals regarding HANA. This is covered in the article, Which is Faster HANA or Oracle 12C? While comparing benchmarks requires interpretation, SAP is no basis to state that HANA is faster or has better performance than comparable databases on the market.

According to Forrester,  enterprises opting to implement SAP HANA can expect to see their software costs fall by more than 70%, their hardware costs by 15%, and their administration and development costs by 20%.

This study was funded by SAP. And it is both an utterly flawed study that is entirely based upon information provided by SAP. Forrester’s statements are entirely based upon projections. Brightwork estimates that HANA is the most expensive database that can be purchased. There are multiple reasons for this: the cost of the software, the cost of the hardware, the transition from Oracle or another database to HANA, the cost of HANA resources, etc..

It is no surprise that today, according to SAP,  HANA has more than 5,800 customers and more than 1,850 customers running Business Suite on HANA, making it the fastest-growing product in SAP history.

S/4 HANA is sure to further accelerate this torrid pace of HANA adoption.

HANA does not have 5,800 customers using the database. The definition of a customer is that the SAP customer has a HANA license. This license will include a run time license, which requires very little investment from a company. Because SAP has exaggerated these numbers to make an impression on Wall Street and customers, the statement about being the fastest growing product in SAP history is improbable to be true. HANA has been a modestly selling database and still has a modest market share.

HANA has been a modestly selling database and still has a modest market share.

“Many core enterprise systems today — think of the ERP boom in the ’90 — are flirting with overdue replacement cycles and/or upgrades, extensive and expensive customizations, rising maintenance costs and, most critically, a lack of flexibility needed to meet today’s changing business demands.”

All of this may be true in parts. However, the overall sentence is highly misleading.

“In a nutshell, S/4 HANA is a collection of integrated, modernized ERP (and other) apps with a simplified code and data model (no material aggregates to be maintained) capable of running OLTP and OLAP on the same system.”

Untrue. HANA does have aggregates, but they are not called aggregates by SAP. And the problem with current ERP implementations is not that ECC uses “aggregates.” Secondly, the code may be simplified. However, it is not true that the data model is simplified. This is covered in our article Does SAP S/4HANA Actual Have a Simplified Date Mode?

“In addition to ease of implementation without disruption, S/4 HANA benefits include compression, real time analytics, landscape simplification, and ease of configuration, delivered through a simplified and enhanced end-user interface based on SAP Fiori. S/4 HANA, not incidentally, is also optimized for cloud deployment.”

S/4HANA has compression, but again the problems at SAP ECC accounts having nothing to do with compression. There is no landscape simplification with S/4AHANA. There is no ease of configuration. There discussion of preconfigured capabilities in S/4HANA, but SAP has claimed this so many times in SAP’s history, and configuration is still done the way it always has been. S/4HANA has nothing to do with the cloud, although SAP has tried to comingle S/4HANA with the cloud since S/4HANA was first developed.

As the cloud-computing paradigm shift plays out and more mission-critical functions ascend to the cloud, and as reported by Computerworld, 53% of IT leaders cite cost containment as their number one business priority, S/4 HANA will play a pivotal role in 2015, simplifying and reducing hardware costs, driving deeper cost savings from cloud services; increasing the cloud’s analytic and BI capabilities by orders of magnitude; wringing latency from cloud-based services; and infusing cloud services with unprecedented reach and flexibility.

There is zero evidence for any of this, except for the quote from Computerworld. 2015 came and went, and S/4HANA did not play a “pivotal role.” It was barely implemented at all in 2015.

It is confusing as to why S/4HANA would reduce hardware costs. S/4HANA requires HANA, and HANA uses the most expensive hardware as it is a combination of memory and SSD. S/4HANA is still barely implemented in the cloud. Therefore it has not reduced savings in cloud-based services.

S/4HANA (or short: S/4) is the next-generation Business Suite — a new product and not a legal successor of the SAP Business Suite 7 — based on the following three attributes:

There is an important reason why S/4HANA is classified as a legal successor but not a logical successor to ECC. SAP can charge companies that are already paying 23% in yearly support now have to pay for S/4HANA as if it was a new product. Brightwork has previously proposed that S/4HANA should be free to the customer.

This is covered in the article Why SAP S/4HANA Should be Free. NTT Data will never side with customers on this topic, even though its logic is irrefutable because NTT Data is a SAP Partner, and SAP partners must toe the line on anything that SAP says.

The S/4 product family – new products that will be delivered within 2015, starting Q1 – consist of the following three products (deployment options):

This is misleading as the vast majority of S/4HANA implementations are on-premises. Option 1 and option two above are barely used.

NTT Data told a massive amount of lies in a single article. The article is deceptive from beginning to end, which is why it is most deserving of our award for the Brightwork IT Propaganda Award.