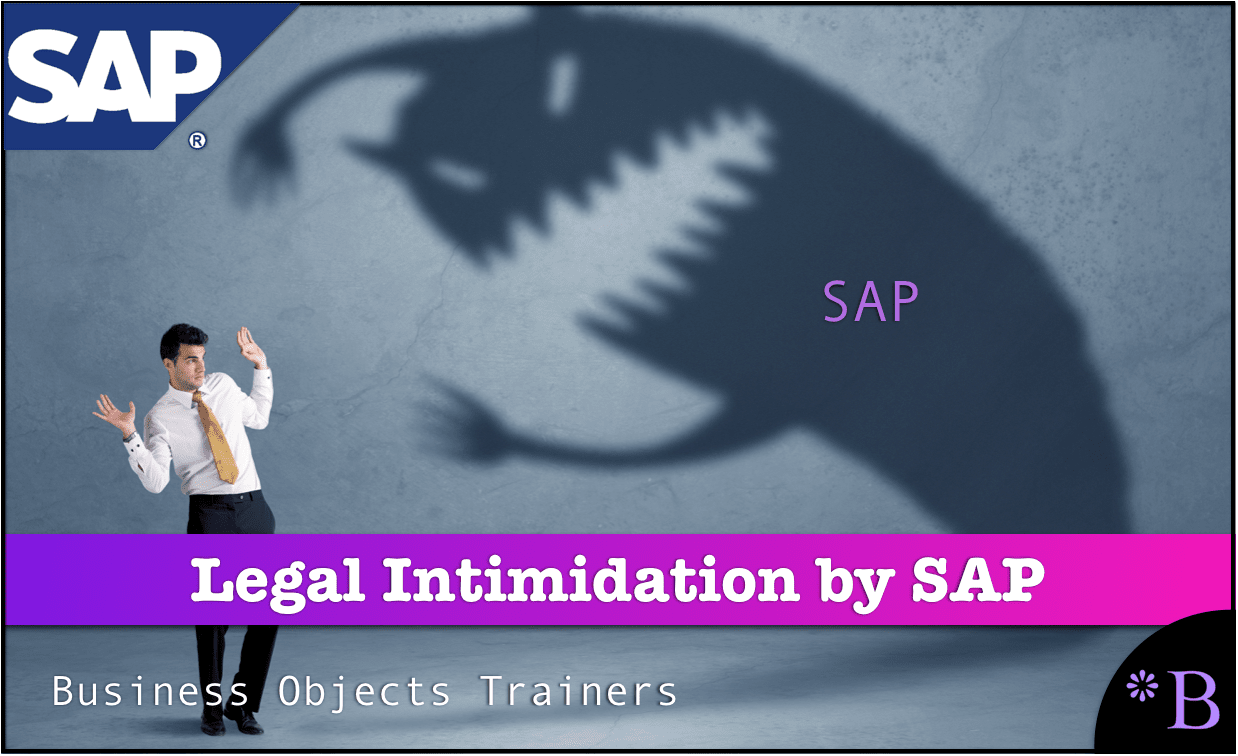 This article describes that SAP has been using legal letters which misrepresent what is called fair use laws to intimidate people into paying them to show SAP Business Objects screenshots.

What is Fair Use Law

Before we go into the details of what SAP does, let us take a brief detour into Fair Use.

“Fair use is a doctrine that permits limited use of copyrighted material without acquiring permission from the rights holders. Examples of fair use include commentary, criticism, news reporting, research, teaching, library archiving and scholarship.” – Wikipedia

Fair Use has several factors which make up how work is determined to be covered by the doctrine. However, generally, the new work cannot merely reproduce old work. Therefore, an author could not copy 1/2 of a copyrighted work in an original publication and declare protection under Fair Use. Fair User is strongly protected by US law because of several logical reasons. First, to properly comment upon and critique other original work, it is necessary to use samples of the work. Quotations are of course essential to be able to use, but depending upon the subject matter, graphics or video or recordings are also quite important. For instance, Fox News is routinely ridiculed by a variety of media outlets. News Corp, the parent company to Fox News, would not, if it had its druthers, allow any of its video to be used without approving the commentary beforehand. If Fair Use were not in effect, it would enable Fox News, and any other media outlet to effectively silence criticism. Secondly, Fair Use is strongly inherited from the free speech portion of the 1st Amendment, which reads..

“The First Amendment (Amendment I) to the United States Constitution is part of the Bill of Rights. The amendment prohibits the making of any law respecting an establishment of religion, impeding the free exercise of religion, abridging the freedom of speech, infringing on the freedom of the press, interfering with the right to peaceably assemble or prohibiting the petitioning for a governmental redress of grievances.” – Wikipedia

Most all institutions seek to restrict speech to the speech that they agree with, which is not really a speech at all but what was openly referred to before being associated with the Nazis as propaganda (propaganda is alive and well, but the word isn’t). Companies would prefer if US law were changed so that all commentary or independent writing on the product of private companies, or companies themselves had to be cleared through that company’s PR department.

The US legal systems allow lawyers to threaten pretty much whatever they like in letters. It’s an extraordinary aspect of our legal system, but it is pervasive. Anyone familiar with legal letters knows that they are designed to break the morale of the letter recipient. Each side continues to posture moving back and forth between outrageous threats until a settlement is reached or the case goes to trial. The extended the charade goes on, the more the costs spiral upwards, if a case goes to trial, then the expense level goes up another few notches.

It is straightforward to get lawyers to write letters with impossible legal threats in them because there is no enforcement of fake legal statements. Therefore, while SAP’s attorneys, while knowing that they have no legal claim, hope that they will reach some people with the letters who do not understand that the legal claim is false. This can have a chilling effect on the use of SAP material, which is worth the price of sending the letters. Lawsuits are exorbitantly expensive, a fact which gives attorneys, even more, power and ability to push their weight around. Only the wealthy can afford a legal dispute (unless they are suing and the attorney picks up the fees on contingency). Some attorneys make their living merely sending extortionist letters which have not a legal basis to businesses. They can send 100s of letters on a topic, by solely using a mail merge program, and even if a low number of people payout, it is still a worthwhile endeavour. The people who do pay do not know that the attorney in question never planned to follow through on the letter.

SAP has two objectives when making false claims about US Fair Use law. First, they want to restrict the ability of others to provide training without paying SAP. Second, they would deny the right to show SAP screenshots to anyone critical of the software. Under SAP’s interpretation of copyright law, the display could only be allowed if the software company felt that the writing and coverage were sufficiently definite. Indeed, they would then be able to ask for written material to be changed or rewritten by SAP until it was sufficient to their liking. Therefore, SAP desires to publish not only false information through its marketing and influence with publishers but also any independent author.

SAP’s One Way View on This Topic

Interestingly I was contacted by SAP before my book, “Inventory Optimization and Multi-Echelon Planning Software,” being published and was asked by them if they could receive an advanced copy. I denied the request, and SAP proceeded to tell me that since they were partners with another software vendor that did have access to the book, they would go around my will and contact that vendor.

SAP claims the right to access to material that is not even published yet, and yet they claim that people should pay for the right to display screenshots that of SAP that is in the public domain.

I think the word hypocritical comes to mind.

I will be waiting for SAP to send me a fake legal letter. If and when I receive it, I will immediately publish it, along with the law firm on this blog. I will then critique the letter so that others can see the faux arguments that SAP uses. I am quite interested in getting my hands on this letter.