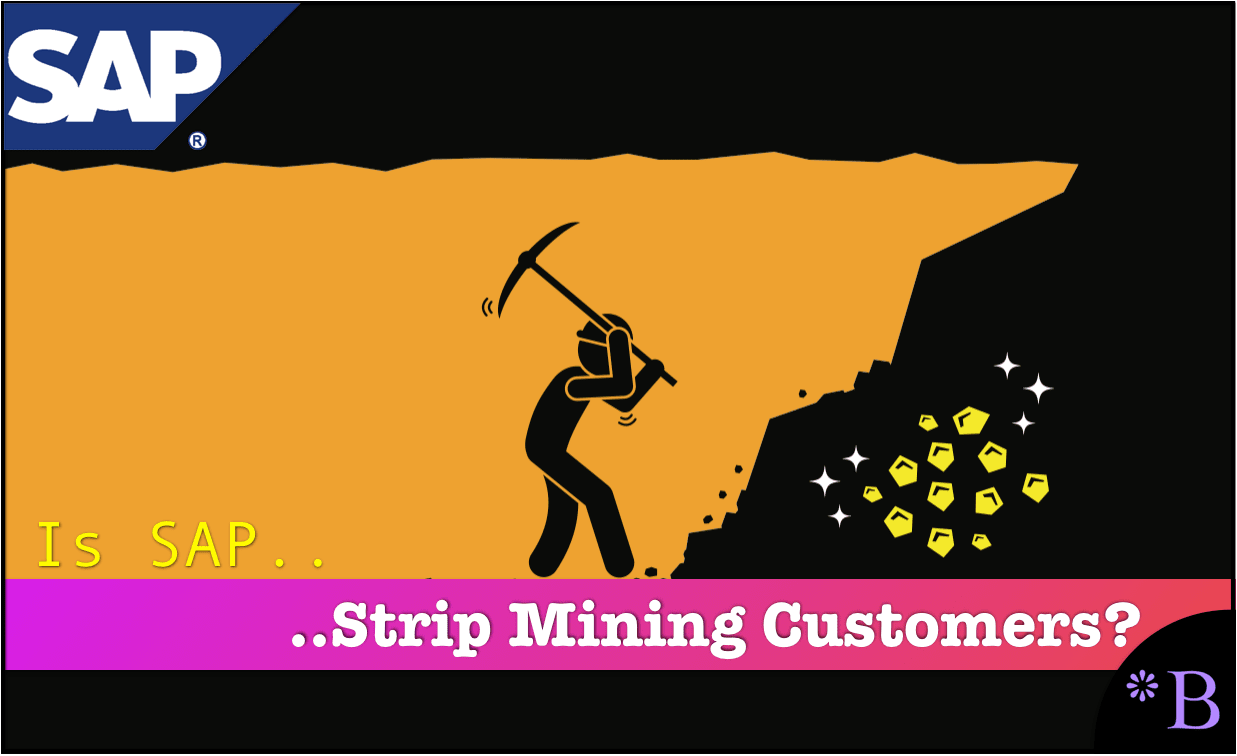 Let us begin with the recent Diageo vs. SAP case.

The Facts of The Diageo vs. SAP Case

In the case that was tried in a UK court, SAP just recently won its case against its longtime customer, Diageo. The following quotation provides an excellent synopsis.

“Diageo also licenses SAP Process Integration, which it has used to connect Gen2 and Connect with its core SAP system. Although the applications’ end users don’t directly interact with SAP, the company contended that it was also entitled to named user licenses for those end customers—all 5,800 of them.” – Constellation Research

This is a highly controversial case as it deals with indirect access. I covered indirect access as it pertains to HANA in my last article. However, right after that article was written, the judgment was announced in this case in the UK. The case has left a lot of people scratching their heads. I followed the judge’s logic, and she tried to get to an equitable judgment. But I believe the judge made an error regarding the basic interpretation of the legitimacy of indirect access.

The liability for Diageo is substantial. If the judgment stands, they will owe SAP roughly $70 million.

The Connection of ERP to a CRM System

All of this is a typical integration between systems. Something that, up until a few years ago, did not require the purchase of extra ERP licenses from SAP.

SAP proposed in its lawsuit that this was “indirect access” to its SAP ERP system software. Diageo suggested that it wasn’t, and the judge sided with SAP, although in a strange outcome, the judge could not find the appropriate SAP license that applied to the usage.

The quote below from Computer Weekly:

“In my judgment, there is no applicable named user category for the Connect customers… They do not have access to source or object code. They do not have access to the functionality provided by SAP ERP in support of the wider operation of Diageo’s business. They access business process functions and information from the database for the purpose of ordering products and managing their own personal accounts only.”

This isn’t very clear. How can Diageo be responsible for paying an SAP license that, even after litigation, is unclear as to which SAP user license applies?

Interestingly, SAP wanted even more money from Diageo than was granted.

“..she (the judge) resisted SAP’s full demands, declaring that such usage did not need to be licensed at professional user level – £9,400 per user including VAT, as demanded by SAP – but rather as other types of users that could not be identified and were not listed in SAP’s price lists.”

Again, SAP has a large number of SAP user / SAP license types on its price list.

My View on the Diageo Case

For people that don’t work in IT for a living, there is, in fact, a straightforward way of testing whether SAP should have had a valid case of indirect access against Diageo. And it is this.

If Diageo had purchased SAP CRM instead of Salesforce CRM, would SAP still have demanded that Diageo pay them for the same number of SAP ERP licenses?

However, the answer is, in fact, “no.” There is, in my view, no way that SAP would have claimed Diageo if Diageo had purchased SAP CRM instead of Salesforce CRM.

Now many people know the terms offered to SAP customers that will read this article. If anyone disagrees with my statement, then comment on this article. I am very interested in learning how what I proposed is not the case or under what conditions it would not be.

This case, along with a buildup of performing many years of research on SAP, ranging from SAP technology to SAP business practices, has led me to conclude something quite significant.

SAP is now a legacy.

Back in the 80s, SAP marketed against legacy systems. SAP, along with Gartner and all of the major and most the minor IT consulting companies, told potential customers the following:

As this period predates my career, I learned of this in what I can only describe as hidden history from my research for the book The Real Story Behind ERP. All of these entities (SAP, Gartner, the consulting companies) were amazingly inaccurate in their ERP predictions. And, each of these entities communicated these unproven messaging without worrying about compiling a shred of evidence.

SAP has used its ERP system to push customers to buy more systems from SAP. However, after customers purchased the ERP system, they faced a diminishing marginal utility from each additional SAP purchase. There is a strong trend at play here, and it has been largely ignored. But the more the company invests in SAP, the less they incrementally get out. That has been the reality for the past few decades. And now, there are increasing liabilities to maintaining or growing one’s SAP footprint. Costs continually rise, and any company is now potentially subject to an audit and to indirect access fees that, in most cases, would never have been actionable at the time the SAP software was purchased.

As with the companies from the 1980s who had become overwhelmed with the maintenance of so many homegrown legacy systems, SAP’s unsustainability is now ever more apparent.

Let us talk about just a few of the reasons why. “Why” could probably be the subject of a lengthy paper, but we can review a few of the essential factors in a less comprehensive form.

I have covered the use of indirect access to extract from a customer. Something which is missed by just about every analyst covering SAP is that most of its post ERP applications have not been successful.

With its top-selling ERP system, SAP embarked on a diversification into other application categories in the 1990s. Let us now discuss those applications.

If we review these applications, while they have certainly generated sales, none of them can be considered successful technically.

Here is a brief overview of post ERP applications that SAP released.

One of the more successful product suites was APO (my area of expertise and a suite of applications for which I have authored five books). While consulting with them has paid the bills, I can’t say that companies see much APO business value. The APO maintenance overhead is quite large, and customers tend not to like using the APO modules. So again, the waste involved here is overwhelming when we consider all implementations of these products globally. Now Deloitte or Accenture see this list, and a big smile comes over their faces, but it is hard to look at this list as an implementing company and have many good feelings. Mostly these applications are just a bunch of bad memories for those that bought them.

I should also bring up; I am one of the only SAP consultants who will write this. It is the case that SAP consultants will come up with any excuse they can to support the reasonableness of using the list of products listed above. It is accepted that as an SAP consultant, you both only say and write positive things about SAP, and most SAP consultants I have met have no knowledge of applications outside of SAP.

I chalk this up to financial bias; I can’t believe that the list above’s inherent limitations are not self-evident to many SAP consultants. However, it should be remembered that most SAP consultants work for an SAP consulting company, and writing what I have written, or any real criticism would be an excellent way to get fired from a consulting company. SAP consultancies are about profit maximization, not truth-telling, or following an evidence-based approach to conclusions.

And of course, there were more applications, but none of them stand out much differently than what I listed above. SAP also has acquired some applications, from Business Objects to SuccessFactors to many others.

However, none of the acquired applications are even as prominent now as when they were purchased. Most are considerably less noticeable. As development lags, they follow a trajectory very similar to IBM’s software acquisitions, where they become out of date and less relevant as time passes. SAP has quite a lot in common with IBM. IBM is doing reasonably well financially, but IBM has lost its ability to innovate or provide much value. They now rely upon acquisition, labor exploitation, lawyers, and contracts. IBM is no longer even a desirable employer.

The Failure on the Big Bets like S/4HANA and HANA

The next topic is that the big bets SAP has placed on HANA and S/4HANA have not worked out anywhere near expectations. HANA is a moderately selling, super-premium-priced database. S/4HANA has minimal traction in the marketplace.

For those that know my writing, I have extensively covered both HANA and S/4HANA, and there is far less actual fire than smoke on these products. See my other articles on these products on my LinkedIn article page. The sales for both do not contribute very much to SAP’s revenues.

And now, we get to why SAP has to employ something like indirect access. It is broadly known that SAP cannot meet growth goals. If we look at the applications released after ERP, the growth story is not there. The growth is not there with the big bets. HANA, S4, etc.

Indirect access merely is strip-mining their customers. Under that analysis, it is a marker or leading indicator of the decline of SAP. SAP is using indirect access, so it does not have to compete. This is textbook monopoly behavior. Textbook as in going way back, going back to Standard Oil in the US.

SAP’s CRM application is not competitive. How can SAP compete in the CRM space with Salesforce or BaseCRM with what SAP CRM offers?

And after reviewing all of these different data points, I realized that SAP is the legacy system!

What is a legacy system? Well, it is a system you have relied upon historically, but which you are trying to minimize the investment into as you migrate to something more to “your liking.” No company can replace everything at once. Legacy is the portion of your systems that you rely upon but may be replaced later.

The question now is not whether to grow your SAP investment but how to shrink it.

Who Figured This Out First?

Who had the best bead on this? I nominate Vinnie Mirchandani. In his book SAP Nation and SAP Nation 2.0, how unsustainable the whole SAP industry was. And there are very few candidates for this title, as very few people were willing to write accurately about SAP.

The degree of groupthink on SAP has been awe-inspiring.