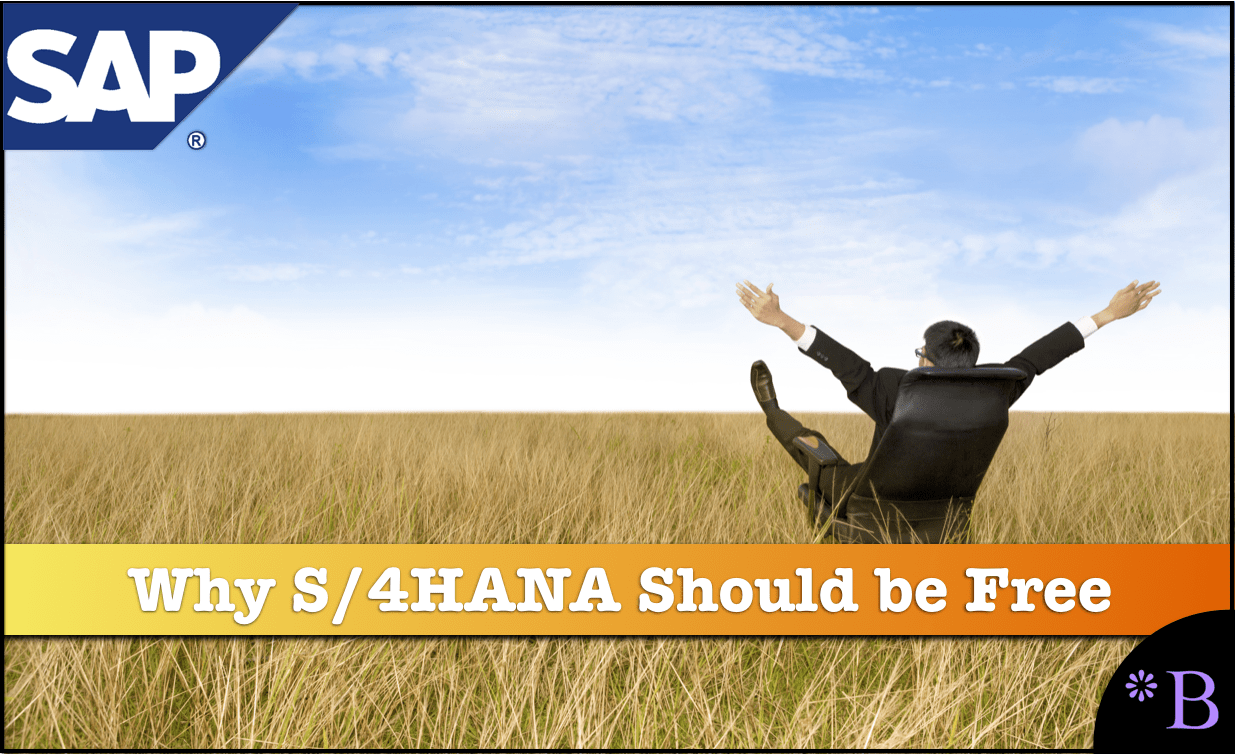 The marketing blast on S/4HANA has been so hot and heavy over the past several years that it has been easy to forget some crucial details.

Well, I have had the time to think through what SAP has been doing with S/4 based upon a few research projects I have been involved with on the topic. Through this research, I came to a new conclusion on a subject regarding S/4HANA costing. This is one of the findings that I think I should have picked up on a while ago, but as they say….better late than never.

Secondly, I did not originate this idea. No, the first time I heard of this sentiment was from an article that explained the position of the UK&I SAP User Group. They made the following statement.

“Customers who have paid maintenance fees on an on-premises product get to upgrade to the next version for free.”

As soon as I read this, I thought the UK&I SAP User Group was correct. And if the US ASUG were a user group, rather than only a compliant vessel of SAP, they would bring this issue to the front and fight for their users.

SAP has made every effort to differentiate S/4HANA from ECC. The official story is that there is technically the very little difference between S/4HANA and ECC outside of the database. What is more accurate is that SAP is performing some changes, but it uses political terminology called “simplification” with ECC functions, fields, etc..

Customers will get a big surprise when they open the box on these changes. Some of these simplifications, upon review, don’t seem to be improvements; they are just changes. As with changes to MS Windows over the years, change does not necessarily mean improvement. Windows probably reached its top level of capability in version 7, and subsequent editions are different, but not better. (Windows 7 was released back in 2009!) And Windows 10 aggressively monitors users, so it is becoming more like FaceBook than just an operating system. But I only signed up for an operating system. Using the word simplification does also not mean (necessarily) improvement. But let us hold this topic for another time.

Change of SAP Applications Away from Database Independence

Remember that in previous versions of SAP’s ERP system, SAP did not specify a SAP database. A suite that has simply had a new database added (along with some Fiori apps) is not an entirely different application. Remember, SAP does not “throw in” the database with S/4. It is a separately priced item. However, SAP has stated in clear terms that S/4HANA is not a follow-on of ECC 6.0. In SAP’s document, “Custom Code within SAP S/4HANA On-Premise,” they say the following:

“SAP S/4HANA is SAP’s next-generation business suite, it is not a legal successor of any SAP Business Suite product (emphasis added). It is a new product completely built on one of the most advanced in-memory platforms today…”

This is not technically correct (or depending on how you look at it only partially right), as most the business logic is the same from ECC. And in internal documents, SAP sings a different tune. In their sales training they state the following:

“It is the logical successor for the flagship product the Business Suite.”

Did you get that? It is the logical successor, but not the legal successor. What does that mean!!? What this means is that S/4HANA is not covered under the previous support agreements.

SAP has repeatedly pointed out that S/4 is not a functionality change, but is in the database. This is stated by SAP in the following quotation:

“The data model – the table structure – has been massively changed..SAP R/3 was developed in the Nineties. The applications, and the underlying business data structure just reflected the technical limitations of the hardware and database at the time.”

Well, customers did not ask for ECC to use HANA. As Wolverine from the X-Men might say, “That is on you, bub.”

The Underlying Data Structure as a Product?

Also, since when is the underlying business data structure, something that was “sold” to customers? The data structure, database, data design was on the vendor, and the customer has never really much cared. The benefits were to be an emergent property of the application rather than a separately marketed entity. Actually, for those that might be interested, the table structure in ECC is quite convoluted. I diagrammed a large number of tables in the supply chain are of both ECC and APO in an ERD diagram, and SAP had not laid out the tables and relationships intelligently. It is a bit of a mess. On the other hand, they did not have the excellent ERD diagramming tools back in the early nineties that they have now, so the SAP table designers were at a disadvantage.

SAP has been saying that S/4HANA is fantastic. Once you lay out the financial implications of S/4 (which is all about selling HANA), it is evident HANA puts SAP in the catbird seat to control your IT spend more than they do now (if you run SAP).

There are several very fundamental problems with SAP’s charging for the SAP upgrade of S/4HANA.

If S/4HANA is not the legal successor, then what is? When customers purchased ECC, no one told them that ECC, the most widely implemented ERP system, was about to be sunset and that the would need to buy a new ERP system (which is just a re-jiggering of ECC). This is cutting off the SAP upgrade for free, something customers have a legal right to.

Logical Problem #2: Undermining the Support Contract for the SAP Upgrade to S/4

When a customer purchases an on-premises application, the understanding is that a license will be obtained, and an annual support fee covers all upgrades. Precisely as the UK&I SAP User Group stated in their quotation. No matter how SAP would like to spin it, it means that ECC customers will be double charged. They will pay SAP 20 to 22% per year for annual maintenance, which was supposed to include the standard SAP upgrade. The logic of support updates is that a portion of the revenues goes to product development. (As anyone who interacts with SAP support knows, it certainly does not go into salaries for those that respond to tickets.)

But now, instead of getting the next version of ECC for “free,” customers will pay again for S/4HANA. And what did SAP do to ECC to deserve all this extra money? They placed ECC functionality on a simple analytics database. They then promoted S/4HANA as solving a bunch of phantom problems like running MRP or end of close quarter faster. Neither of these processes is processing constrained at SAP customers. But in the SAP marketing literature, it makes it seem that these are bottlenecks that are massively limiting what SAP customers can do.

SAP is not offering a separate pathway for ECC clients who don’t want to migrate to S/4HANA. Therefore, as time passes, these customers only have the following choices:

SAP has said that you have to use S/4 on HANA. No other database will be certified. However, the technical logic of this argument, which was always unsubstantiated, completely evaporated when Oracle introduced mode switching in Oracle 12C DB. Oracle 12C most likely outperforms SAP’s HANA database. The details of this are covered in my previous article, Which is Faster HANA or 12C?. What that means is that by a company migrating to S/4HANA, they now have SAP making their database purchase decision for them. The customer loses all ability to select the database they want to use. And this is entire to the financial benefit SAP as SAP cannot claim any superior performance over alternatives.

In one fell swoop with S/4HANA SAP would like to accomplish the following:

The conclusion I have come to after reviewing all the facts on S/4HANA SAPuUpgrade is sobering. When I explain this to people who work outside of enterprise software, the response is that this sounds unethical and a shabby way to treat loyal customers.

With S/4HANA, SAP had planned to double charge its current SAP clients with its policy on S/4HANA. All this talk about how S/4HANA will be the new digital platform etc. is just to get customers bubbly so can be double charged. SAP bought off Forrester, who created a falsified (projection based) lower TCO report for HANA. The Forrester report left out the double charging issue with S/4HANA (of course).

Hasso and McDermott and others do not seem to appreciate that SAP has already taken such a large percentage of their customer’s IT budgets that they don’t have much more to give. My clients have too much SAP, not too little SAP. SAP is in places where it has only limited applications. These applications suck money from the IT spend and prevent progress, gobbling up funds that could be used for better applications, for business process analysis, training, etc..

Lack of Interest on S/4HANA

Something happened with S/4HANA that SAP did not expect. No one was all that interested in S/4HANA. So with no market momentum, SAP is simply not in a position to charge for S/4HANA. SAP is, in fact, desperate just to get “customers” recorded for S/4HANA. This is so they can go to Wall Street and tell them that S/4HANA is the fastest growing application in the history of humanity, which is what Bill McDermott has said about HANA.

So a new tactic for this most important SAP upgrade was hatched. Giveaway S/4HANA, but keep the high pricing for HANA. And that is the current strategy. So, S/4 is bring priced now just like it was the legal successor to ECC.

If I were a customer of SAP, I would strongly object to the terms that SAP initially proposed for S/4HANA – a product that is still not yet released beyond one module (Finance).

Talk About S/4HANA Versus The Reality of S/4HANA

How much SAP has talked about S/4HANA versus what it has delivered should be a concern to customers.

The S/4HANA application does not meet my definition of a finished product. It is a beta. I mean, S/4HANA Finance is a beta. The rest of the suite is nothing because it is not yet released (or incrementally being released — so, however, you measure that). Also, the simplifications impose a high analytical cost, and that is before you even get into the HANA DB issue. There are substantial questions as to whether even the Fiori apps that are ready are also a suitable replacement for the associated SAPGUI screens they are meant to replace.

Here is what is acceptable to me if I were a customer that used ECC.

I cover how to interpret risks for IT costs in the following book.

SAP S/4HANA: Custom Code Adaptation: What You Need to Consider for Your Custom Code When Transitioning to SAP S/4HANA, SAP, June 11, 2015.