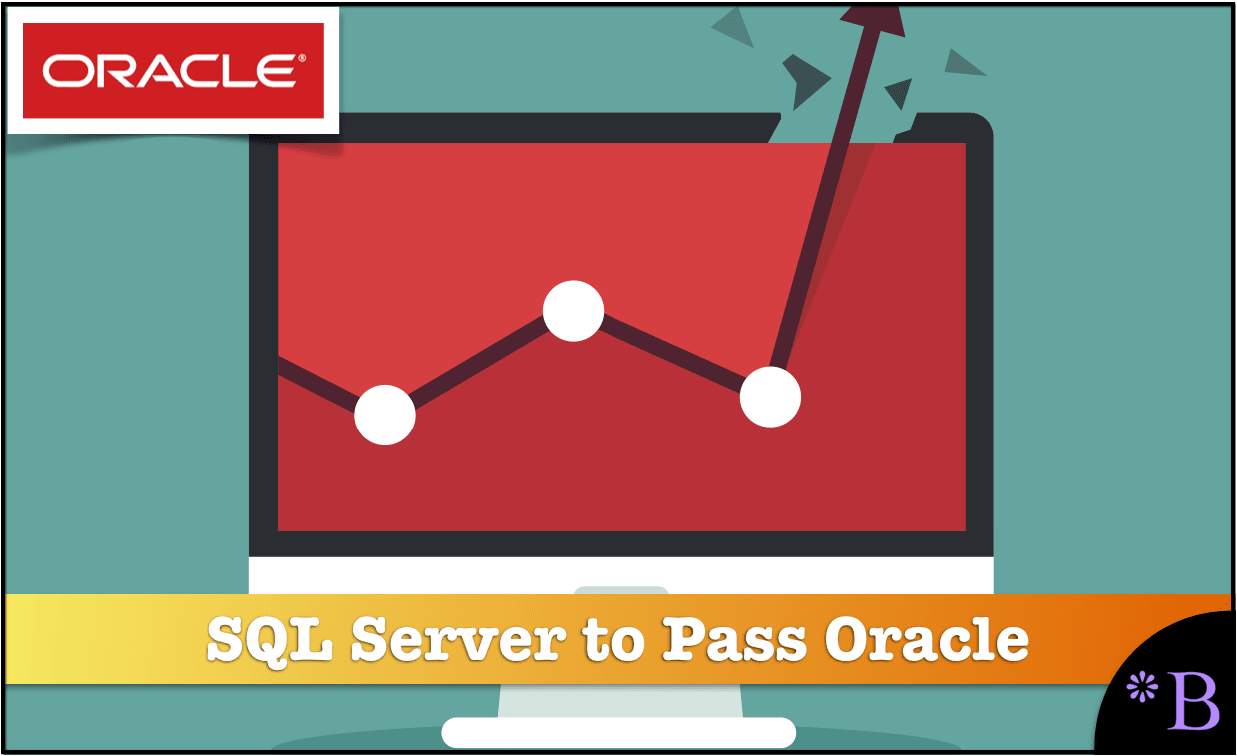 Introduction: The Logic for a Changing of the Guard

Oracle’s dominance in databases has been so great for so long that it is taken as a given. However, according to DB-Engines, something interesting is about to happen in the next year, and this is shown in the graphic below:

DB-Engines ranking is a site that uses a method that combines a series of factors to result in a rank of how widely a particular database is used. So what factors do they use? Well, I have listed the description of their method below:

“Number of mentions of the system on websites, measured as number of results in search engines queries. At the moment, we use Google, Bing and Yandex for this measurement. In order to count only relevant results, we are searching for <system name> together with the term database, e.g. “Oracle” and “database”.

General interest in the system. For this measurement, we use the frequency of searches in Google Trends.

Frequency of technical discussions about the system. We use the number of related questions and the number of interested users on the well-known IT-related Q&A sites Stack Overflow and DBA Stack Exchange.

Number of job offers in which the system is mentioned. We use the number of offers on the leading job search engines Indeed and Simply Hired.

Relevance in social networks. We count the number of Twitter tweets, in which the system is mentioned.” – DB-Engines

This seems like a reasonable way to perform a ranking.

To begin, let us review the usage/popularity list from DB-Engines. This is for June.

The June column shows the growth since the past month (as this snapshot was taken in July). The month-to-month change moves around quite a bit. So the next column, July 2016, shows the change since the same month last year and is a more reliable guide to what is happening long term.

If we conservatively take Oracle’s decline from 2016 and 2017 and cut it in half while keeping the other three databases at their number from the previous year, then the 2018 database rankings would look like this:

Interestingly, Seeking Alpha has noticed this as well. In their article, The Death of the Commercial Database, they stated the following:

The commercial database market – 80% of which is an oligopoly of Oracle, IBM (NYSE:IBM), and Microsoft (NASDAQ:MSFT) – has remained one of the most stable and sticky in all of tech for over two decades. However, we think the velocity and magnitude of its decline is likely to surprise many investors.

Faster growth in use cases such as social media, IoT, and unstructured/semi-structured data that are ill-suited to the SQL standard upon which the database oligopoly is based;

Revenue from database software represented ~36% of Oracle’s total FY16 revenue and ~55% of its operating profit.”

This statement is quite interesting because it means that none were as profitable as its database business of all of Oracle’s acquisitions.

According to SeekingAlpha, Oracle’s 2016 profits break down the following ways:

The Counter Argument to Oracle’s Database Decline Versus SQL Server

Oracle’s databases have many proponents, and it was interesting to find a counter-argument to the Seeking Alpha article, which I have pasted below:

“Articles like this were written 20 years ago. In 1997, the Oracle database was going to decline because it did not fit modern use cases and new document data types (HTML, XML) like the new extensible databases such as Illustra and Polyhedra. Oracle was not “object oriented”, so OODBMS like Poet, Versant, and Object Store would soon rule the day. With 64-bit computing mainstream, in-memory databases like TimesTen, ANTS, and SolidDB were on the “right side of Moore’s law.” In data warehousing, Red Brick and IQ were a lot faster due to advanced indexing. Most of all, Oracle was going to be replaced by cheap or free open source databases, especially MySQL. Here we are in 2017, and of the vendors just mentioned, only TimesTen and MySQL still survive” – as part of Oracle Corporation.

The issue with this analysis is that just because Oracle’s database decline was predicted due to new technologies in 1997 and did not occur, it does not mean that this new prediction will not occur. HTML and XML were greatly overblown in the late 1990s, and they never affected databases they were projected to have had. The same applies to object-oriented databases. It is also true that open source databases did not replace Oracle, although MySQL has undoubtedly reduced Oracle’s proprietary database growth.

If Oracle’s control over databases declines, it causes two issues.

There is a massive amount of discussion as to whether Oracle is moving to the cloud fast enough. Still, Oracle appears to have a bigger issue at hand: it’s swiftly eroding market share in its profitable core product.

On the other side of the issue is Microsoft’s fortunes, as they appear poised to surpass Oracle in database popularity. This actually won’t matter all that much for Microsoft.

SQL Server sells for a much smaller amount of money than Oracle does with its database, at roughly $14,000 for an enterprise version. Estimates are that SQL Server and all other Microsoft databases (principally Access) drive roughly 5% of revenues for Microsoft.