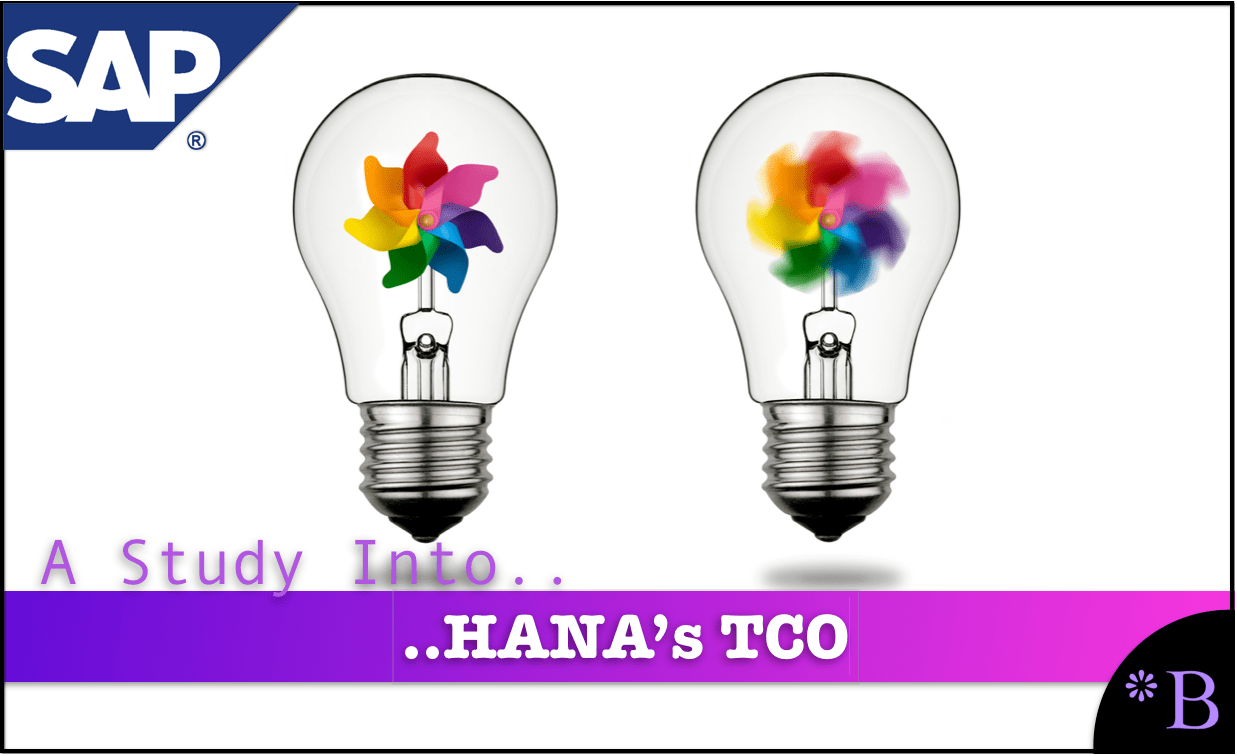 SAP has made many statements about HANA lower TCO. SAP has proposed lower TCO for both HANA (the database) and S/4HANA (the ERP system). Yet, every single statement about HANA TCO by SAP is supported by a single study into the topic, a study paid for by SAP and produced by Forrester. In this article, we will evaluate the support for SAP’s claims regarding HANA TCO as well as provide our own TCO calculation.

Hasso has routinely argued that SAP HANA is not expensive. Typically Hasso will use the example of compression that is available in column-based databases to reduce the footprint. However, discussing the topic with people a little closer to the ground will provide a very different impression. If you talk to SAP account executives or account executives in SAP partners, they will routinely tell you that SAP HANA is expensive. They will also inform you that HANA is very hard to position, for this reason, once the price tag comes back, the customer often balks.

It is a simple thing for Hasso to propose in interviews how SAP HANA could, in some hypothetical sense, be not too expensive. But all other sources point to HANA being quite expensive. And you will not be buying HANA from Hasso but an SAP account executive. Hasso’s accuracy lately has been off, and I don’t see analysts or the traditional IT media outlets recording this inaccuracy or commenting upon it. I have performed a detailed analysis of Hasso’s statements on HANA.

SAP HANA’s TCO is much different than proposed by SAP (and repeated by SAP surrogates). It is not lower than competing alternatives, and there are rather obvious reasons as to why. These reasons can be expressed in a general sense. But it is essential to perform a mathematical estimated with a full explanation of each of the line items of HANA’s TCO as well as a full explanation of these assumptions.

Most of the assumptions explained in this study are not explained anywhere else that we could find when we performed a literature review before performing this study. While there has been an avalanche of claims about HANA, there has been extremely little actual research conducted on HANA. And none of it would be able to meet what we consider to be of sufficient quality to be used in decision making regarding HANA.

This article you are reading will provide some of the details about the research; however, the bulk of the material is paid research. Researching HANA, validating SAP’s claims, checking with many sources in many parts of the world is time-consuming and requires funding. While there exists a great interest in selling HANA and HANA consulting services, there has been close to no interest in determining the accuracy of SAP’s statements regarding HANA. This is a problem. The funding for research very strong tends to flow in one direction — towards promotion.

It is recommended to purchase this document to get the only credible information available on the market, the TCO status of HANA. Being a new product still being developed, it is of the highest importance to become aware of the experience of early adopters. Given that SAP research and development have run into various limitations in developing new products going back to after R/3 was released in 1992, HANA has a high probability of being less than projected by financially biased promoters of HANA.

Navigating the Framework and Verbiage of HANA

HANA has unfortunately been confusingly explained to customers. Often HANA is referred to as a platform when it is, in fact, a database. There have been several products that have HANA in the name (which are sometimes changed to have HANA removed), but these are not HANA. Along with the similarly named S/4HANA, this can make it confusing what is being discussed.

The following marketing graphic is an excellent example of this.

One could spend quite a lot of time critiquing this and other HANA graphics. For example –

Overall, due to the heavy marketing focus on HANA material, virtually every contention about HANA must be validated with sources outside of SAP. To keep this research article from being too lengthy and meandering, we describe areas that are necessary and pertinent to TCO.

Who is Brightwork Research & Analysis?

Brightwork Research & Analysis is an independent research entity. We specialize in researching SAP. We have first-hand experience implementing SAP, something which differentiates us from most other research entities that cover SAP.

SAP leadership perceptions are the result of a global orchestrated robust ecosystem, all with vested interests. System integrators, CIOs/CFOs, analysts, and IT media defend the perception of SAP leadership to preserve their interests, which have been valued in trillions of dollars. (See the book SAP Nation and SAP Nation 2.0 by Vinnie Mirchandani for a fuller explanation of the financial implications of SAP’s ecosystem.) According to Gartner, Accenture has 46,000 SAP consultants, IBM has 36,000, can you count on their neutrality to give you advice on SAP? They clone what SAP says with no research or verification, what SAP says they repeat. This leads to zero objectivity and what should, logically at least, amount to zero credibility as to the viability of HANA.

SAP is pro-HANA, but many SAP consulting companies are also pro-HANA. And their evidence? That can be found in billing hours. Getting behind SAP, HANA maintains its income streams. The more money customers invest in SAP, the better these consulting companies do. Most media entities, who take money from SAP, are also pro-HANA, and SAP has distributed large amounts of information that is directly from SAP marketing and is unfiltered by the media outlet since HANA and S/4HANA’s introduction. SAP has distributed large sums of money to media entities for what is called “paid placements.” These are undeclared advertisements, usually written by SAP, and can be found in Fortune, Forbes, ComputerWorld (owned by IDC), and many other IT media outlets. All of this has led to a general misimpression as to what has been happening on HANA implementations.

Our lack of financial relationship with SAP has allowed us to publish this study without external influence.

The Background on HANA

Before getting into the case studies of HANA, it is crucial to have a full frame of reference as to what HANA is. Along with S/4HANA, HANA is one of the largest initiatives on the part of SAP ever undertaken. It is one of the largest current development projects at SAP and has been for several years. SAP went public in 2011 with the announcement of HANA. HANA maintains a natural connection with the S/4HANA database, as currently S/4HANA, the ERP system can only run on the HANA database. The two products have the same term “HANA” in their title. This is quite unusual as it is either extremely rare or unique to include the database in the name of the application. SAP’s reason for doing this is primarily for marketing related.

S/4HANA maintains an artificially exclusive restriction with the HANA database. SAP S/4HANA runs only on HANA. Customers are being forced to replace Oracle and IBM and Microsoft databases with HANA and that is just the tip of the iceberg as at a wide variety of accounts. SAP is pushing HANA into various applications, usually using some type of compatibility argument. That is only HANA support x, y, or z in the application, and therefore, HANA should be purchased.

HANA can be evaluated from many dimensions, and the overall topic is complex. These dimensions all have impacts on the TCO of HANA. We address these issues as necessary to explain our TCO estimates for HANA.

Intent of the Study

S/4HANA is the next version of SAP’s widely implemented ERP system. SAP has put an enormous effort into marketing S/4HANA. Yet many of the aspects of S/4HANA are not well covered by SAP. For example, important implications for a S/4HANA implementation are left out, mainly if those implications are not positive.

For all of the effort expended by SAP on socializing and popularizing S/4HANA, it can be said without a doubt that S/4HANA is generally poorly understood. But beyond misunderstanding the components that make up the solution, there is an even greater misunderstanding regarding the implications of S/4HANA.

This page will stay open. After making the purchase, select the following article to get to the research article.

Most research is static. However, the plan is for this and for other Brightwork Research & Analysis research to be updated. As new case studies come forward, they will be added to this research. As things change concerning HANA, we will update this research. Companies have the option of having the study renewed every six months (at a reduced rate) so that they can be kept up to date on recent changes.