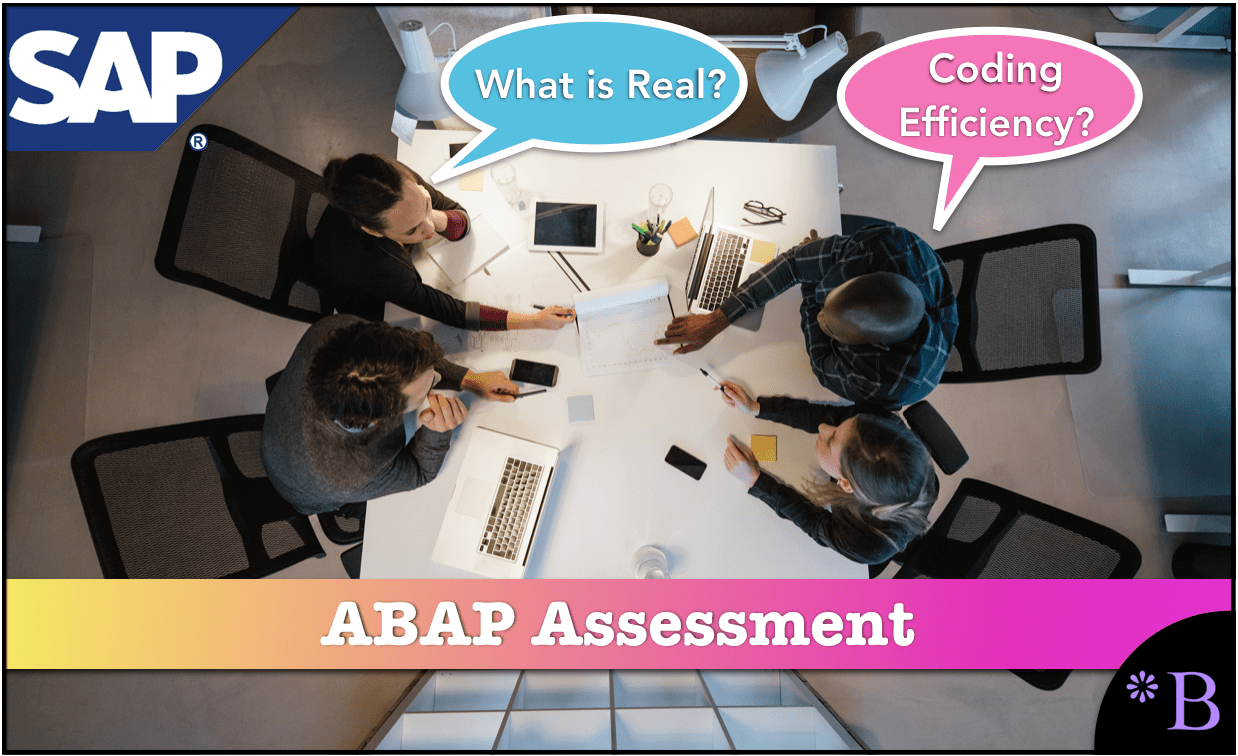 Brightwork Research & Analysis is the only research entity that researches and publishes on SAP that is entirely financially and otherwise disconnected from SAP.

Our research shows that nearly all of the information available on ABAP lacks any type of independent analysis.

This means the information on ABAP is unreliable.

What is the Assessment Based Upon?

Our ABAP assessment is based upon years of research into SAP that combines decades of SAP implementation experience with technical research and case studies to provide what is real and what is not with ABAP without concern for what SAP thinks of our research conclusions.

Every customer has particularities to their environments that range from the functionality utilized in ECC to the degree of customization to the yearly IT budget and a host of other factors.

The first step of the assessment is an SAP environment evaluation. This allows us the customization of the assessment to our client’s situation. This is achieved with in-person interviews with various people in IT. These are not lengthy interviews, and this part of the process does not have much elapsed time. We have seen many SAP environments and can generally ascertain the general lay of the land in a few weeks. This assumes that many people are not out or traveling, which relates to the timing of the assessment.

Due to the more significant difference between the requirements and SAP than is estimated during the sales phase, nearly all SAP customers have much more ABAP than they ever anticipated. Companies purchased SAP for its applications but quickly found themselves being advised as to development strategy by what is nothing more than an application provider.

While outside of the SAP world different languages are used for their fundamental properties (for instance, selecting Python for mathematics tasks. Scala for more concise code that is Java compatible, Swift for speed, debugging capabilities and compatibility with iOS and the Mac OS), ABAP is selected because SAP says it should be.

This was a windfall for SAP consulting firms, but it left a problematic legacy for customers. We review how ABAP has been used and how it is currently being used and how efficiently it is being used.

SAP has partnered with Mendix for low code. However, what does this really mean for you? Both SAP and Mendix provide information that is generally not consistent with SAP’s history. We offer an independent analysis of what is likely to happen with SAP and low code development.

Question #4: ABAP and the Cloud

SAP has been trying to push companies to use ABAP in the cloud, where it does not fit. This is because SAP and the consulting firms have ABAP resources trained and ready to bill, not because this makes any sense from a technology viewpoint. We cover the reality of ABAP in the cloud.

It is not feasible to port existing (non-trivial) ABAP development into the cloud. This is because of the restricted ABAP derivate that they made up for “ABAP in the cloud.” The ABAP platform lacks something like a “build and deploy circle” of software. Every code change is done in the same centralized system.

Virtually all ABAP code is on-premises, this prevents it from being moved to the cloud. This is hidden from SAP customers by SAP and SAP consulting firms.

The description of this video on YouTube is, “During his SAP TechEd keynote, SAP CTO Björn Goerke announced ABAP as the next environment added to the SAP Cloud Platform. A new, modern version optimized for cloud, ABAP.”

This video from SAP is filled with inaccuracies. This ABAP in SAP Cloud is essentially this type of announcement.

SAP is facing a brick wall with the cloud. They are so accustomed to dictating the programming language and environment to customers, that they do not like at all the fact that ABAP does not work well for the cloud. Moreover, the cloud is the future. SAP has tried to promote ABAP for the cloud, as Björn Goerke, SAP’s Chief Technology Officer, announced the availability of an ABAP development and runtime environment on SAP Cloud Platform in September of 2017 at SAP’s TechEd. There are some reasons why this will amount to very little.

SAP has controlled its projects by force-feeding ABAP into customers, basically taking advantage of their naivete. And this has allowed SAP to control those accounts. But with ABAP incapable in the cloud, SAP needs to maintain control, so they give up the language, but force development into their cloud. However, when SAP presents the SAP Cloud to customers, it does not tell them any of this. Instead, it tells them that the SAP Cloud is entirely open and invites comparisons to AWS. Notice the following quote not from SAP, but from an SAP friendly resources on a LinkedIn comment.

Companies jumped into using large amounts of ABAP (in most cases) without consideration for the efficiency of their operations, or the long term maintenance. High maintenance costs translate to high billing hours for SAP consulting firms. They are two sides of the same coin.

We evaluate the maintenance overhead of ABAP as part of the assessment.

We provide coverage of how companies can improve their development productivity by taking a look at ABAP for what it should be kept for doing, and what parts ABAP should not be used for.

SAP customers are fed a constant stream of hype around the modernization of ABAP, which never comes true. We cover how companies should view ABAP and what they can expect from it. There are limitations regarding ABAP that companies that use ABAP do not seem to be apprised of.

For SAP customers evaluating S/4HANA, a major part of the question is determining the effort to remediate or modernize the code from ECC to S/4HANA. This supports the overall implementation analysis. In our research into 240 case studies into S/4HANA, we found the published implementation durations of S/4HANA to be greatly understated.

In this analysis we qualify every custom object (either customization or adapter) as one of three categories in relation to a migration:

This results in a presentation of the cost-benefit analysis of modernizing vs remediating/maintain in S/4HANA.

As we are not positioning ourselves for S/4HANA implementation business, we have no incentive to underestimate the effort, and we can provide a far more accurate estimate of code remediation and modernisation than any SAP consulting firm.

SAP customers waste an enormous amount of effort on ABAP because they receive inaccurate information about ABAP from SAP and SAP consulting firms. This is information that has little other purposes than to lock in the customer to continual dependence on SAP and their consulting firms.

Our SAP ABAP Assessment is one of the only diagnostic services in the market that provides accurate information around ABAP.