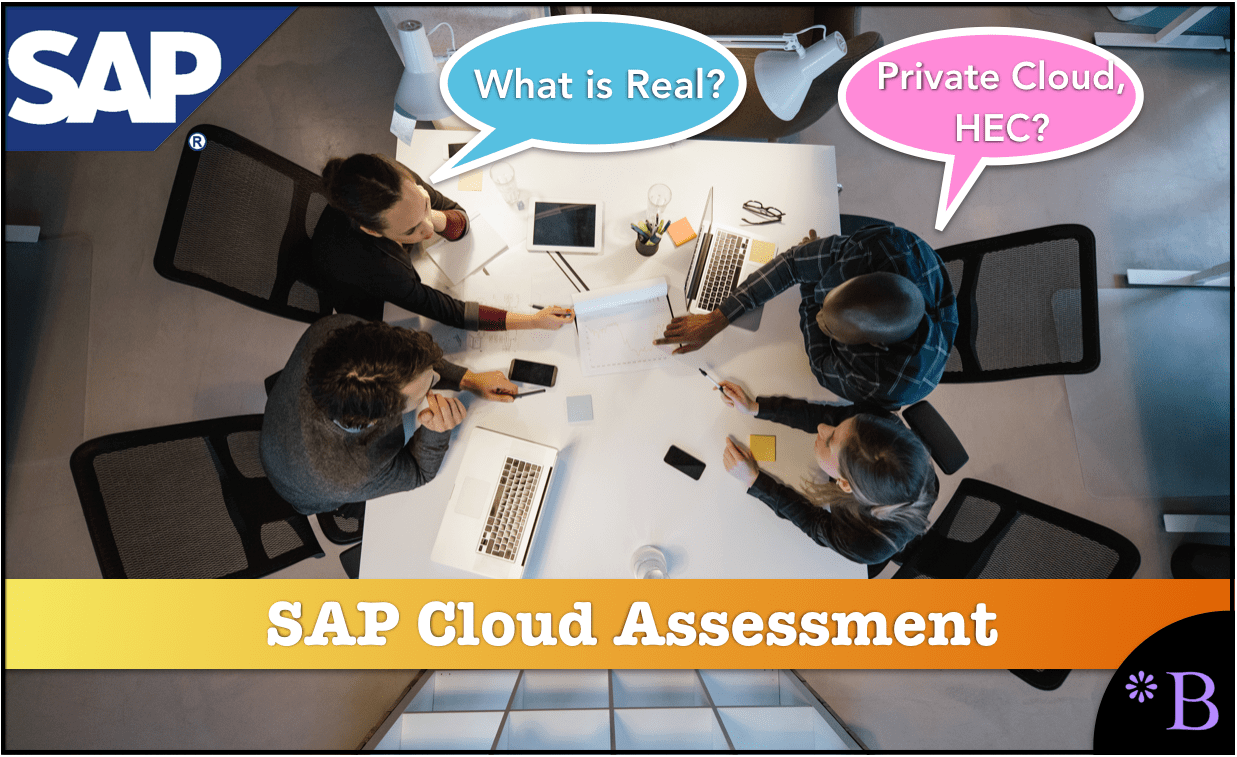 SAP and SAP consulting companies propose that their customers must use SAP Cloud. SAP Cloud lives off of co-opting public cloud hyperscale providers. However, its HEC networks are a series of “private cloud,” which is generally known as hosting. This fits with the comfort level of many SAP customers that tend to be conservative as SAP has always been an on-premises environment.

The best description of SAP’s Cloud messaging is “muddled.”

What is the Assessment Based Upon?

Our SAP Cloud Assessment is based upon years of research into SAP that combines decades of SAP implementation experience with technical research and case studies to provide what is real and what is not with SAP Cloud without concern for what SAP thinks of our research conclusions.

Every customer has particularities to their environments that range from the functionality utilized in ECC to the degree of customization to the yearly IT budget and a host of other factors.

The first step of the assessment is an SAP environment evaluation. This allows us the customization of the assessment to our client’s situation. This is achieved with in-person interviews with various people in IT. These are not lengthy interviews, and this part of the process does not have much elapsed time. We have seen many SAP environments and can generally ascertain the general lay of the land in a few weeks. This assumes that many people are not out or traveling, which relates to the timing of the assessment.

As we alluded to in the introduction, one of the most significant areas of confusion around the SAP Cloud is what it is versus what SAP and the consulting firms present. We illuminate how the SAP Cloud or HEC (HANA Enterprise Cloud) works (we use HEC and SAP Cloud as synonyms even though there is a separate SAP Cloud or what was previously known as SAP Cloud Platform, which is far less used). Part of the reason that poor decisions are being made is that customers are being misinformed as to what HEC actually is, and how vendors are selected and “recommended” to SAP customers. All of this is explained during the assessment.

SAP Cloud (HEC) has terms and conditions that are unrelated to public cloud providers and are more restrictive than on-premises purchases to which SAP customers have been acclimated. SAP uses cloud phraseology, but its terms and conditions are nothing like cloud, not how Salesforce uses the term, but how the cloud is generally understood.

This video is from 2017 when SAP called their SAP Cloud, SAP Cloud Platform. None of the things, particularly related to integration, came true. We predicted this….back when SAP consulting firms were telling their customers that the SAP story could come true.

Brightwork Research & Analysis has been virtually the only entity (research or otherwise) to publish on the reality of SAP’s strategy with the cloud. We have documented the pricing, lock-in, on-premises, and many other implications. Uncovered in the IT media or by SAP consulting firms is that SAP is using cloud to INCREASE lock-in while presenting cloud as increasing the freedom and flexibility of their customers.

Question #5: The Relationship to Between SAP Cloud and Public Cloud

This video is also incorrect. Released in 2018, S/4HANA Cloud has been very sparingly implemented. Now S/4HANA “on premises” version can be deployed on the public cloud. This video presents a “plug and play” nearly SOA model that has no correspondence to what happens even several years later on SAP projects.

SAP combines SAP Cloud/HEC with other SAP messaging that is, in many cases distracting. See the following video.

First, it is primarily SAP and SAP consulting companies that want companies to transition to S/4HANA. SAP reports every S/4HANA sale to Wall Street as a market justification for their S/4HANA and HANA strategy. This is not largess on the side of SAP. What should be a concerning factor for SAP customers is that SAP reps quickly move from SAP Cloud/HEC discussions to other SAP offerings, and there are a large number of “salesy” and unexamined assumptions contained in SAP’s statements. Things that are specific courses of action that SAP desires to push its customers into doing are presented as accommodations to customers by SAP.

Secondly, Jeff uses the term “us” when describing who is running the HEC cloud, implying it is managed by SAP. This is incorrect, and this is something we address in the assessment.

We have written several books on how to leverage the cloud for both SAP and Oracle environments. This detailed research has helped us address this issue from a variety of angles. Our SAP Cloud assessment now only covers the use of SAP Cloud/HEC but also discusses other cloud alternatives.

SAP has copied virtually all of its messaging around cloud from public cloud providers. SAP presents itself to customers, IT analysts, IT media, and Wall Street as cloud in several ways and to the degree that it isn’t. And there is virtually no fact checking that occurs regarding SAP’s claims. Deloitte, Infosys, IBM, and the entirety of the SAP ecosystem can be relied on to repeat whatever SAP says. We provide the real story on SAP Cloud/HEC.