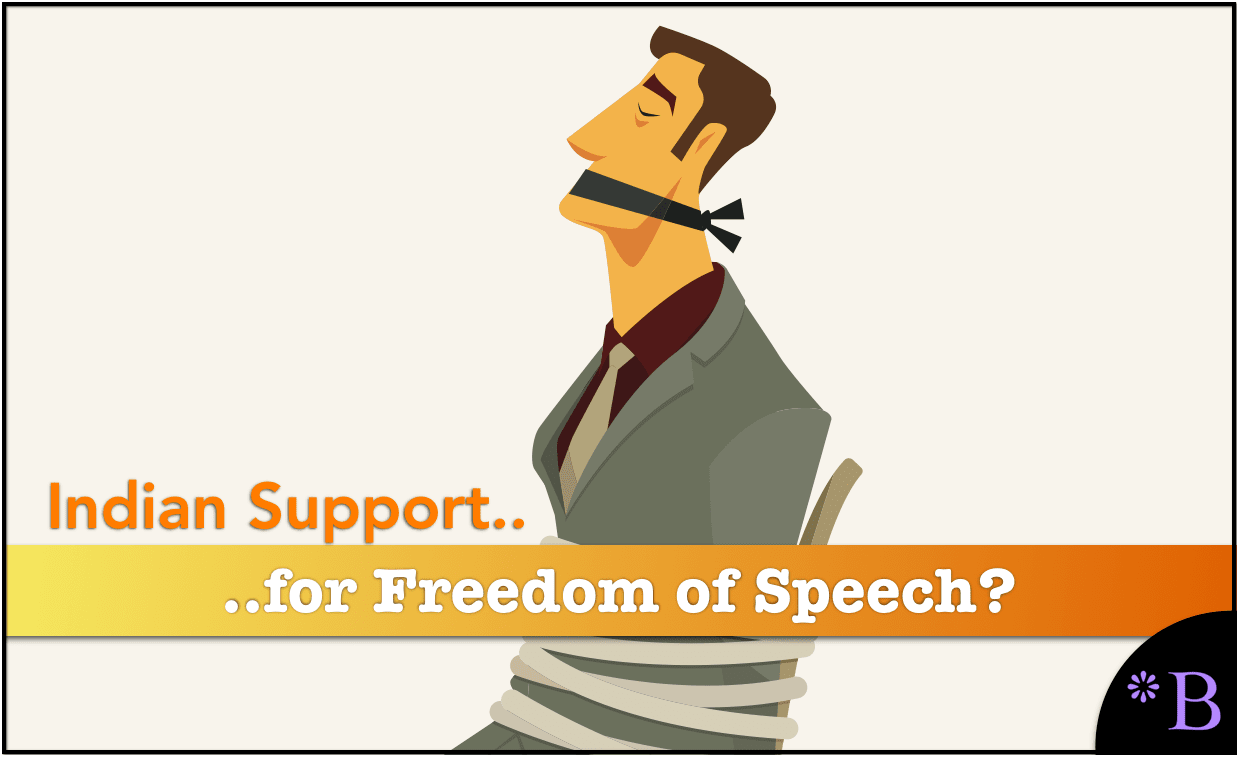 In debates with many Indians over the years, a clear orientation comes across that Indians do not respect US freedom of speech laws and norms and that they seek to apply the standards of India regarding speech to the US and anywhere else that they immigrate.

The following is a perfect example of a statement by an Indian regarding freedom of expression.

See the response from us. We find we have to continually go over the topic of US law and norms regarding freedom of speech. Now Aditya works in SAP, and SAP is our lowest rated vendor for accuracy. Here is a comparison of Brightwork’s accuracy versus SAP in the article A Study into SAP’s Accuracy.

What Are Indian Freedom of Speech Standards?

India low levels of freedom of speech and problematic media system are covered in the following quotations.

According to Reporters Without Borders, India ranks 140 out of 180 countries for press freedom, behind violence-ridden Afghanistan and South Sudan. And things are getting steadily worse: In 2002, India had ranked 80 of 139 countries surveyed.

Nearly 70 percent of the country’s 1.3 billion people live in rural areas, and they are served by local-language journalism that is often blighted by poor ethics and no real divide between editorial and sales teams.

In Sultanpur district of India’s most populous state, Uttar Pradesh, Vishnu Jadav is a 38-year-old reporter covering the entire town’s news for four major Hindi-language newspapers—including Dainik Jagran, which has more than 70 million readers. But an average day for Jadav includes visiting local sari shops, toy stores, automobile dealers, and cell-phone retailers: They are the biggest advertisers in his town. “I barely get out with the explicit intention of newsgathering,” he said.

On average, Indian newspapers are sold for only about a sixth of their production costs. The rest of the revenue comes from advertising—which makes newspapers especially reliant on governments and corporations. And since many media outlets run on skeleton staffs, reporters like Jadav essentially become traveling salesmen masquerading as reporters.

In Sultanpur, journalists like Jadav have now taken to calling themselves advertising agents rather than journalists. “We get more respect as agents,” Jadav said. “Journalists have lost the high stature they were accorded in the society.” And Sultanpur is not an exception. Most regional-language newspapers and magazines appoint one or two “agents” who double up as reporters in the districts.

This trend—of journalists becoming salespeople—leads us to a rather disturbing conclusion: The nuts and bolts of the media machinery are completely broken, perhaps far more than India’s global media ranking suggests.

In much of the country, editors no longer serve as gatekeepers or provide important editorial context; they are instead running advertising companies. And while deficiencies in the country’s elite English-language media tend to get the most attention, the crisis in the regional press will have deeper impacts on Indian democracy. With a feeble opposition, weak institutions, and an inadequate media, Indians have no more checks and balances. – Foreign Policy

Change Since Independence from Britain

Indians have long held that the UK’s colonialization held India back. However, the more time passes since independence, the worse many things in India get. The current utter lack of respect for freedom of speech seems to be an inherent quality of the Indian culture.

A Simple TED Talk About Garbage in India Requires a Mask?

In the US, people don’t need to speak with their identities hidden…..normally, that is. Notice that when a TED talk focuses on criticizing India, suddenly a mask is necessary.

What does this Indian know about how other Indians might respond to this critical talk? This talk was about waste.

What happens when the discussion turns to corruption?

Indians on the H1-B Issue

While millions of US workers have been displaced by Indian H1-B workers, Indians generally don’t tolerate any criticism of the program. Considering the amount of Indians brought into the country every year under a variety of visas as we cover in the article How the H1-B Program Understates The True Number of Yearly H1-B Visas. There has been extremely little pushback on the program, even though it is ripe with fraud and the US government entities do close to nothing to stop companies from engaging in fraud. 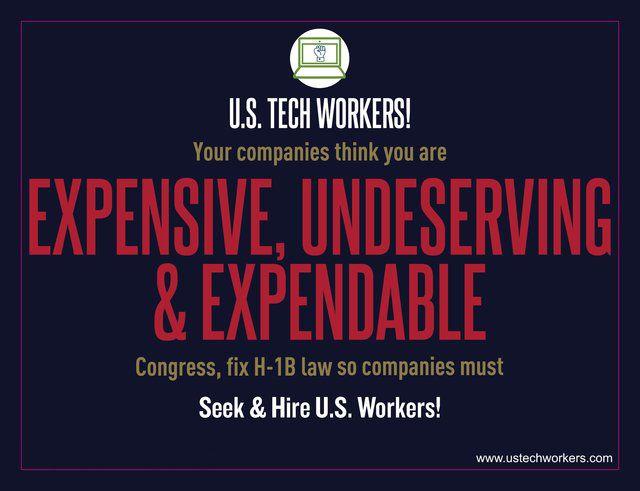 The best known anti-H1-B “protest” that we can think of was the signs that were put up in BART stations in the Bay Area. Notice how muted they are.

However, observe at least one Indian response to this advertisement which is a petition to have the advertizements removed at The Petition Site.

San Francisco’s Bay Area Transportation System recently accepted and placed $80,000 worth of subway and interior train ads purchased by “Progressives for Immigration Reform”, whose Executive Director is Kevin Lynn. The ads cruelly and disparagingly attack legally present H-1B holders of U.S. “tech worker” visas. The ads are placed to take up the majority of ad space in BART stations and trains thru at least April. They foment disrespect for any legally present [holder of H-B1 visa] skilled tech worker who is not American born.

Is the supporter of the petition reading the same advertisement we are? Where is the cruel and disparaging attack? How does encouraging the hiring of US workers format disrespect for H1-B workers?

These claims do not at all match the advertizement.

The Petition Makes a Claim Around Disparagement that Is Not Apparent

Though the phrase above refers to how U.S. tech companies supposedly “view” American tech workers, the letters’ size, color, and prominence were clearly designed to leave rushed commuters with the impression that this is how legally present H-1B tech workers should be viewed, instead. The total effect is to disparage and marginalize American and foreign born tech workers alike.

There have been around six assertions at this point that aren’t supported by the sign. What seems far more likely is that this entity opposes the sign’s contents and is looking to recast what the sign says to be offensive, so that there can be an argument made to remove it.

BART Makes a False Claim Around Freedom of Speech?

BART claims that freedom of speech laws give them no choice but to put up PFIR”s purchased posters. That assertion is questionable, at best. I am concerned that other racist and xenophobic organizations, besides the PFIR, will now feel empowered to place similar ads in public places, not founded on facts, which encourage disrespect for, and violence against, immigrants.

And here comes the racist accusations. Indians will use racist accusations at the drop of a hat, whether supported or not — all while Indians have demonstrated a pattern of being probably the most discriminatory group that we track, as we cover in the article How Indian IT Workers Discriminate Against Non-Indian Workers.

A Sign Asking that US Workers be Respected and Hired is not Freedom of Speech?

And the group recasts freedom of speech to be speech that they agree with.

History has shown that such defamatory, racially motivated signs and slogans, freely placed in public places, are NOT designed to be an exercise in “free speech”. If allowed to remain, the ads will assuredly encourage more violence against ANY person who is not “native born”, whatever his/her legal immigration status, and whether employed or not.

Does this sign say something defamatory? If so, what is it? The petition writer seeks to draw a corollary to previously racist signs, but the problem is that they have not established the sign as defamatory.

Is it Ethical to Bow to Pressure to Restrict Speech?

This would still be the right and ethical thing for BART to do. BART has many choices of ads to accept from paying advertisers and other organizations to display in its public, partially tax supported facilities. There is no obligation to accept ads which are offensive to or which denigrate any classification of workers or commuters, American or foreign born.

Why does a public space that is partially funded by taxpayers not have freedom of speech protections? This same argument has been used by groups that want to keep others who have controversial views from speaking at universities. The fact that an area is partially taxpayer-funded does not give anyone the right to censor messaging they don’t like. Many things are taxpayer-funded. Parks, streets, convention centres, if speech is not protected in public spaces then where is protected? I ask because it is certainly not protected in privately funded spaces. In fact, private entities are the first to step forward and declare that because the area IS private, they are not required to allow free speech. Remember, the First Amendment states that the government shall pass no law that restricts the freedom of speech or the right to public assembly. Well, guess where individuals will congregate to assemble in public? It won’t be in the lobby of the headquarters of Exxon/Mobile. Exxon/Mobile could not care less about freedom of speech, and they don’t allow it in their company.

Should H1-B Proponents Be Using the Word “Ethical?”

Companies routinely lie about their use of H1-B workers, and the foreign worker visas are filled with some of the most horrendously unethical behaviours, and the “ethical” issue the petition author sees as a problem is a sign asking for companies to hire US workers?

A Textbook Attack on Freedom of Speech

In addition to providing dishonest arguments, the author has either no understanding of or no respect for US freedom of speech. The petition is both deceptive, and every one of its claims is false, including its explanation of freedom of speech, misexplaining US freedom of speech to readers, making the reader think that speech that one does like is not free speech.

As more Indians enter the US, they import Indian standards of freedom of speech, which is extremely negative for the US. None of this was contemplated when multinationals began bringing in hundreds of thousands of mostly Indians into the US, most of whom are unfamiliar with US freedom of speech standards and think that the only speech that should be protected is whatever speech they happen to agree with. As stated by Noam Chomsky.

“Goebbels was in favor of free speech for views he liked. So was Stalin.

Unknown to the US population is that one of the greatest opponents of freedom of speech is Obama of all people. The US, under Obama, made it legal to place anyone on the terrorist list, without a judicial review.